And the NORD 1150 was a design powered by 3 Marboré engines., I gratefully
got a scan of the Fana article mentioning it by Tophe.

first the SNCAN types (although we are severly leaving the "secret" region ! ;D )

where did the pilot sit? Does it have a prone cockpit in the nose?

And most of us know the Nord N.2500 to N.2510 variants and projects
,for example the N.2510 was ASW project version.The more interesting
the N.2520 project had 5m increased in length and 7 tonnes add to
the weight.

Do you have a more info about the Nord N.3500 civil/military transport aircraft projects ?.
Click to expand...

For Brochet aircraft there's a very good site here:
http://avions.brochet.free.fr/
The MB.130 is shown in model form, I just can see one engine,
but at least it's a twin-boom a/c.

I spoke about this bomber before,the Nord N.1800A B6 was six
seat piston engines heavy bomber,the N.1800B was a trubo-
prop version and the N.1800C was a jet bomber version (ATAR).
Has anyone a drawing to it ?.

My understanding is, that the N.1800 A, B and C weren't just versions with
different engines, but really different designs. The first design got the suffix "A",
when it already was cancelled, because another, bigger design was submitted,
which later gave way to the "C" design with ATAR jet engines.
T

Hi all
and the nord 2200 from "aviation magazine"

Jemiba said:
And the NORD 1150 was a design powered by 3 Marboré engines., I gratefully
got a scan of the Fana article mentioning it by Tophe.
Click to expand...

Very nice. You've been posting a lot from Le Fana these past three weeks... Did you scan a collection? It's really nice, but I hope we won't get into trouble with Editions Larivière... :-\

The model of the 1600 (with T-tail) is shown in Cunys "Les Aviosn De Combat Francais", too,
with the additional clue, that then still Rateau jet engines with larger diameter were considered.

Do you know if there were advanced, non-experimental versions of N.1601 design, which of course had never been built? Some websites say about an all-weather version...

Stargazer2006 said:
Very nice. You've been posting a lot from Le Fana these past three weeks... Did you scan a collection? It's really nice, but I hope we won't get into trouble with Editions Larivière... :-\
Click to expand...

That's a big advertising for them,as I did with Flight International.
S

hesham said:
That's a big advertising for them,as I did with Flight International.
Click to expand...

Though you may think along those lines, remember there are some publishers who definitely do not see it that way. Think of the constant hassle on this forum with anything published by the Ian Allan Group for instance (which includes Midland, Classic, Airlife and so forth)...

And we keep on never display a materials from their new books.

Jemiba said:
Maybe the N.1620, which is mentioned by Cuny ? Made a 3-view quite a while ago, using an
artist impression and description:
(artist impression from Jean Cuny, Docavia N°30)
Click to expand...

It seems quite intriguing that Nord 1601 had swept wings and its 'derivative', conceived as an operational aircraft, was to have strainght wings. Was Nord 1620 indeed a developed version of Nord 1601?

I would regard the N.1601 rather as an aerodynamic testbed, than a prototype
of a service version, comparing weights may be a bit misleading. And about chosing
a straight wing may have had , it may be a similar case, as the Douglas F3D Skyknight,
where a straight wing was used, too.

No. Maybe a typo of N.2508, the version with auxiliary jet engines at the wing tips ?
Where is this designation mentioned ?

Jemiba said:
No. Maybe a typo of N.2508, the version with auxiliary jet engines at the wing tips ?
Where is this designation mentioned ?
Click to expand...

May be that's right my dear Jemiba,

If you have that volume at hand, perhaps you could check, if on page 47, as given by
the index, really the "N.2580" is mentioned ?
Looking at that list a typo otherwise seems quite natural, I think
S

You don't even NEED to check the original volume to see it's a typo...

A typical example of getting all heated up over absolutely nothing. And typically the kind of blooper that ought to be discarded straight away, given everyone's experience in researching data here for many years in so many books and stuff.

Just realised that this scan of an Aviation Magazine cover shows a lovely view of the R2800 installation on the 2508.

Jemiba said:
Maybe the N.1620, which is mentioned by Cuny ? Made a 3-view quite a while ago, using an
artist impression and description:
(artist impression from Jean Cuny, Docavia N°30)
Click to expand...

N-1620 looks like it was designed by the same (German?) engineers who designed the CF-100 fighter and Jetliner for AVRO of Canada (1950s.)

Slightly off topic but:

The Avro Canada design team early post war was mostly British, with a smattering of Canucks and European refugees. The reason designs from this era look similar is because all the designers around the world were reading the same texts and using the same design and analysis tools. The same thing goes on today.

The Nord 2200 was one of the three naval fighter competitors - for a PA-28 Clemenceau (not the one we knew, an earlier one) in 1949. Of the three, it was the better of the lot... in the sense it did not killed any pilot and had good flight characterstics. Except it was way too heavy for its Nene and its climb rate was abysmal.
The two competitors were
- Arsenal VG-90, two build, two crashed, Decroo and Dellys killed
- NC-1080 (Centre) one build, one crashed, Pierre Gallay killed.

Overall, a disaster. And the PA-28 was not even build ! A total waste of money and pilots. 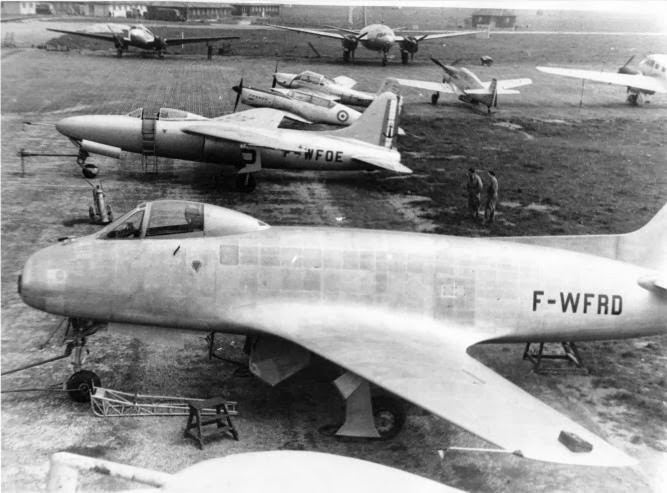 What was left of the Nord 2200 until recently. Unfortunately the wreck was beyond repair or restoration and was scrapped. 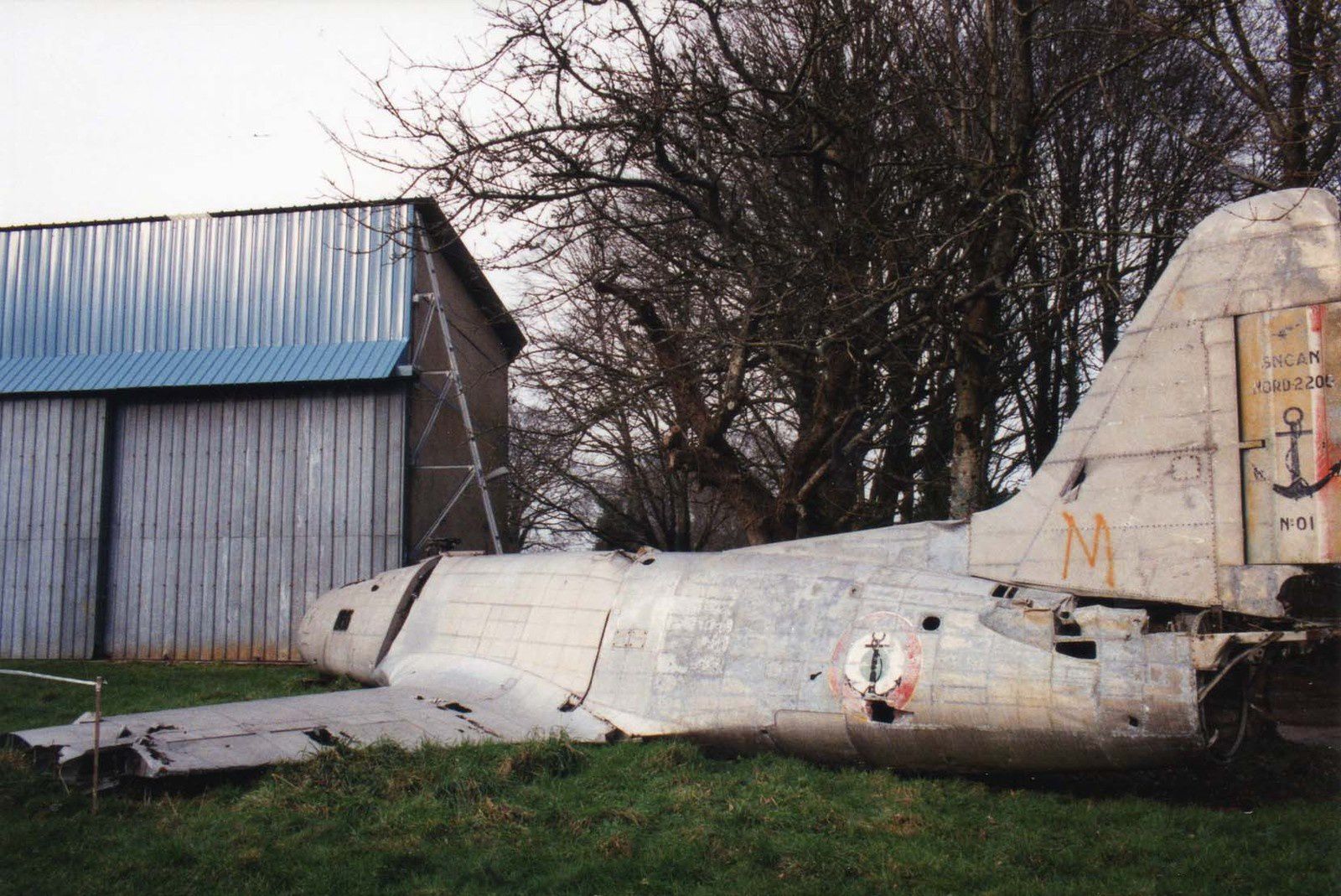 Under the designation of Nord-3000, S.N.C.A.N. presented two Projects. The first concerns an airplane
with three S.N.E.C.M.A. Jets Atar or Rolls-Royce Avon, airfoil low, soaring. The two reactors lateral
are drowned in the wing, but,unlike the Bréguet solution,they are moved away from the fuselage and
located inside the resistant box of sails. The position of the rear reactor has not yet been determined.
He can be placed either above the fuselage, either in this one. The air intakes of the side reactors,
provided in the leading edge, cross the front spar, while that the exhaust nozzles pass through the rear
spar.

The external breakdowns of the sails are in box construction, while the central part is made up of two
beams crossing the fuselage. The two trains main consist of two simple diabolos. retractable in the
fuselage, behind the wing.

The second Project from the Nord concerns a low-wing, arrowless monoplane, the four double-flow
Jets of which are arranged in two pods glued under the lower surface.

here is a Nord N.400,I know dear Caravellarella send it before,but where ?.

Hi! My poor understanding for Nord Gerfaut.
What is Aladin radar?