This issue is devoted to Nord Aviation activities. There are lots of projects but I want to share info from pages 34 to 37. The article is Le département "propulseurs". After the end of WW2, one of Nord-Aviation tasks was research on new propulsion systems. By 1969, Nord-Aviation had been working on statojets, turbo-statos and combined turbo-statos.

Their most advanced aircraft designs at that time are attached here.

1. A couple of Advanced Griffon derivatives with redesigned air intakes

4. Strike-fighter. Expected maximum speed was Mach 4.5 and Mach 1 at low level. This beast was conceived in 1964.


Related to this, I have found, that by 1969 Dassault was working on Mach 3 designs too. In Aviation Magazine International No516 June 1969 it can be found the Dassault Mach 3 fighter drawing (refered in internet as the Mega-Mirage or Mirage 6000). In the text, we can read that this aircraft is part of a French Mach 3 Aircraft research program.

Can anybody add more details about this program?.

Another Nord design, I've made a drawing from. It should have been able
to reach around Mach 4 :

Does it have any good drawings of the Nord 1600 tailsitter that was the immediate predecessor of the Griffon II? I've only seen the one side view in the v/stol section of the AIAA website and I'd love to have better drawings so i could model it.

I can't match the Nord 1600 designation with a tailsitter. The 1600/1601 are experimental jet aircraft from July 1945. It is a very conventional twin jet swept wing design.

Acording to "Les Avions de Combat Français", the immediate predecessor to Griffon was the Nord Gerfaut (not a tailsitter). In fact, there are no tailsitter projects in this book.

There are a considerable amount of taisitters but from other manufacturers. Also in Air Enthusiast No 103 January/February 2003 you have "Improbable Moranes. Morane-Saulnier MS.1001 VTOL Projects" by Allain J Pelletier. Pg 24 to 28. This drawings show designs that can fit in a SF film.

If you can give me some more details I'll try to help because I can't find the 1600 in the AIAA site.

In June 1958 an official program for a Mach 3 interceptor was issued. Nord proposed 2 projects


Both designs were intended to operate as strike fighters in addition to the interceptor role. Number 2 replaced the statos with fuel tanks for this mission.

This designs never reach hardware status but were used as the basis for Mach 3 and Mach 4 bomber projects and other high speed projects in the 60's. Unfortunately, the book ends in 1960 :-[

I think the Super Griffon pic in my precedent post can be one of this projects.

Pardon me, it was a Nord - SFECMAS tail sitter, the Nord 1500 Griffon I. What details I've found are here:

With this three-view attached

Cuny wrote in the second volume of "Les Avions de Combat Francais.." that this
project was a direct derivative, but it is just designated as "ADAV de la SFECMAS"
and in 1955, I think,SFECMAS still was a separate branch, not directly a part of
SNCAN. In the '60s it became part of Nord Aviation. But the mergers in the french
aviation industry are truly a difficult theme in itself ... :

On November 1957, Technical Service asked for a study on a fighter aircraft which was able to take advantage of the experience acquired with the Griffon 02. Preliminary studies were launch by Nord Aviation. It was necessary to cooperate with SNECMA, whom the Super-Atar Engine will be used in the essential jet-ramjet engine combination.

After few months of doubt, an official technical program appeared on June 1958. The main goal was a high altitude Mach 3 capable interceptor. Nord led to the conclusion that a planes such that will need new structural techniques, in particulary due to the large employement of the inoxydable steel. That's why the french constructor conduced negociations along with Budd, an american specialist of soldering for this material, to obtain license of their processes.

-A Super Griffon similar to the 02 prototype, with a ramjet composed of a 2m chamber, a cockpit overhanging the intake and removable canards: 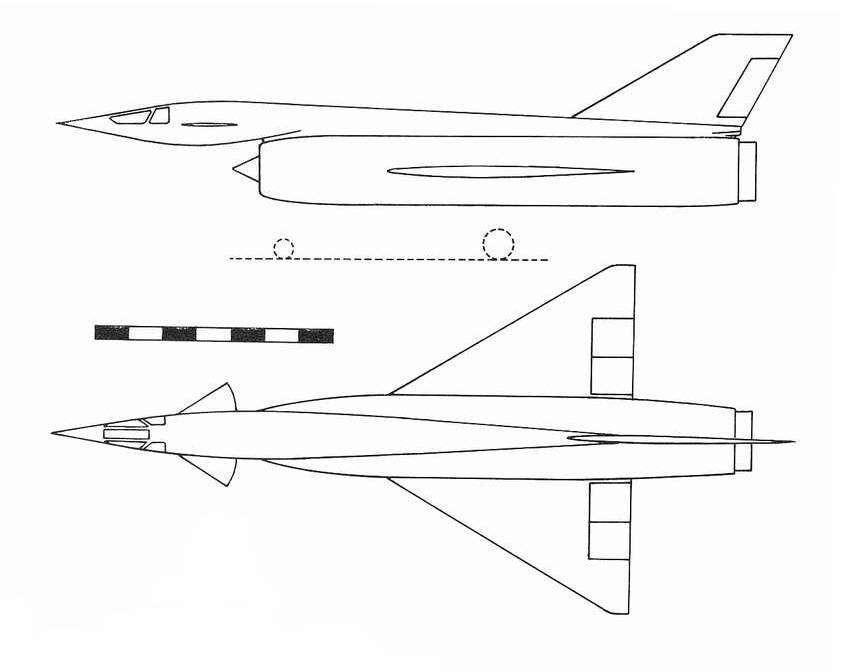 -In case of failure of the Griffon formula, a Bi-ramjet with back right wing, very thin and of weak lengthening. The two ramjets of 0,90 m would have been hung in ends of aerofoil and this plane would have directly profited from the test results of contemporary supersonic target-drone Nord CT-41, The Super-Atar engine would have been occupied the traditional site, on back of the fuselage. The duck plan would have been a traditional delta. 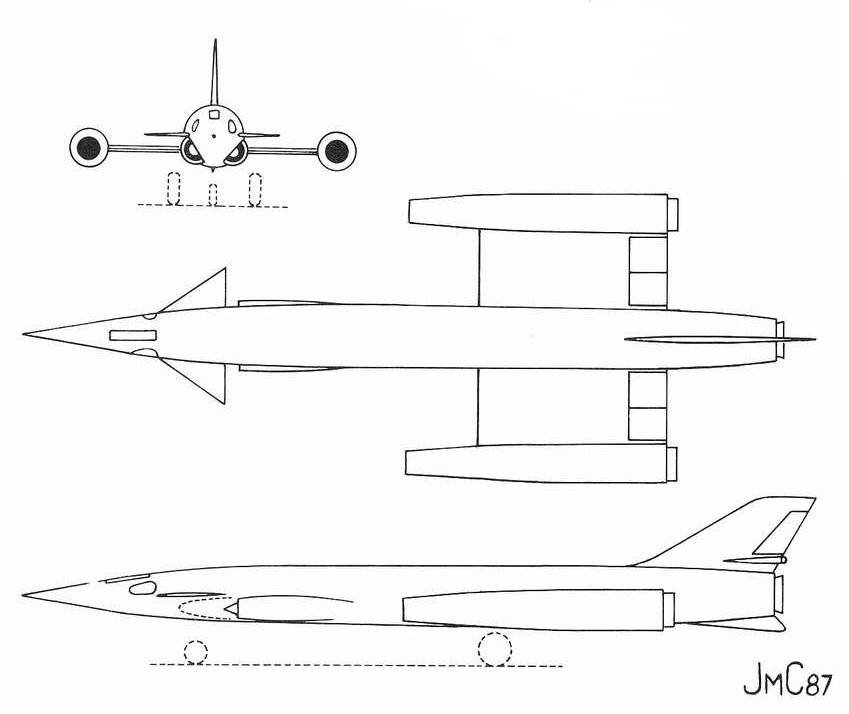 For other missions than interception, the manufacturer proposed an easy replacement of ramjets by large marginal tanks. The armament would have included 2 missiles under fuselage. These studies continued until the end of 1958.

In October, however, Super Atar appearing to have to be given up, autorities asked officially for his replacement by Atar 9 definitely less powerful (6 tons of thurst only), and nobody did not speak about it practically more after January 1959. This work was useful however at the time of later studies (projects of bombers and other apparatuses hypersonic Mach 3 then Mach 4 of the Sixties).

Does someone have the dimensions of the Super Griffon ?

The Nord Harpon also, the kit will be release soon.
(rocket version)

You probably mean the version shown by Jozef ? Or the two which are shown
in Cunys "Les Aviation De Combat Francais" ?

Hi Jemida,
I am looking for the dimensions of super griffon modeled by Josef,
this one:

your Nord M4 drawing looks also good for a model,
what is the source ?
Do you also have the dimensions ?

Source was a page from a Le Fana article with a 3-view, I think, but I only got a single
page, that unfortunately doesn't mention any dimensions.

thanks,
then it must not be an old fana;
dimensions must be in article text;

Wonderfull,
thank you very much Toura;

(My reference is always the wing span to do a kit,
as its the only dimension without confusion)
T

Dear Boys and Girls, here is a 3-view and a picture of the wind-tunnel model with a caption in French for a SNCAN Nord Mach SST "project" from 1960 based on previous work with the Griffon......

The pictures come from the 15th March 1969 issue of Aviation Magazine International......

Any idea if they did any serious work on a military version? 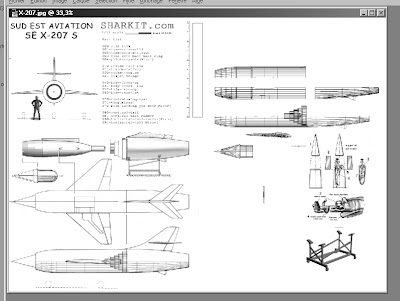 really nice thank you for sharing these photos with us
J

I found this cutaway but very small resolution,does somebody have better,

I can't understand the meaning of this picture. ;D
And...
http://www.masdf.com/altimeter/lebourget/coldwar.html

Unfortunately I Did not note the book this came from but it was 3 large French language volumes on the French aircraft industry.

Barrington Bond said:
Unfortunately I Did not note the book this came from but it was 3 large French language volumes on the French aircraft industry.
Click to expand...

A couple of models I have built of the Nord Griffon Mach 3 projects, these were inspired by the drawings in the Jean Cuny book.

john hall said:
A couple of models I have built of the Nord Griffon Mach 3 projects, these were inspired by the drawings in the Jean Cuny book.
Click to expand...

Wow,what a beauties,thank you John.

Amazing stuff! Thanks for sharing.