My apologies if there is already a thread on this in the book section, I was unable to find one- what is the expected release date of this title?

Madurai said:
There is a reason for a funnel in nuclear surface ships: blowout vents in case of coolant leaks.
Click to expand...

Don't forget air intakes for ventilation! If you place it in a funnel, you have room for the NBC Filters so that they don't impact below decks on precious volume.
C

The text and images have just gone to the publishers for proof reading and type setting. At a guess - sometime in the spring!

Regarding funnels on nuclear powered ships;


Remember that you may have a quite substantial back up diesel plant, which needs exhausts. The chimney effect of the funnel can also provide a substantial mount of air circulation to help remove decay heat from the reactor compartment (The reactor may vent steam to the containment, which remains sealed and acts like a buffer, and you can circulate air around the exterior of the containment). The air in the "outer" compartment will become radioactive (isotopes of O2 and N2) in normal operation, but these have short half lives and so just exhausting the air through a tall funnel was deemed to be acceptable in some cases.

I thought the French used plutonium in their submarine reactors. In places with reactor fuel reprocessing with PUREX, reactor-grade plutonium should be relatively inexpensive and have similar properties to HEU, perhaps at lower cost.

Maiwand1880 said:
The "French"? all of them? 67 million people, each using plutonium in submarines? woa! All propulsion reactors in France's Marine nationale's use are fuelled with oxyde LEU. MOX, if it is what is meant here, is not involved.
Click to expand...

My mistake. Thank you for correcting me.
Why doesn't anyone use reactor-grade plutonium in submarine reactors? The French reprocess their nuclear fuel - reactor grade plutonium should be readily available for a program, if they so desired one?
A reactor with 50% Pu-240 and 50% Pu-239 (this is really bad reactor grade Pu) should outperform one with 50% enriched uranium. And the few tonnes of reactor-grade Pu needed for a reactor should be obtainable from a large 50-GW civil nuclear power program...
The French government is definitely smarter than me, so I'm missing something.
Last edited: Jun 21, 2019

I could have sworn that I've seen this elsewhere on the forum, but it's not on this thread, but here is the model described earlier in the thread.

pf matthews said:
I know the Italians had (have) very particular styles in Naval Architecture. but could the attached of the poposed Enrico Fermi give any suggestions for a "Military" RFA??
Click to expand...

Prior to lockdown I started doing archive research on RN interest in nuclear propulsion for surface ships. I originally went looking for studies of nuclear propulsion for CVA01 referenced in 1963 cabinet minutes but found there is a significant amount of surviving material relating to studies undertaken from the late 1950s to the late 1960s. I only got one afternoon at this so what follows is not founded on the most rigorous research.

Y502 Replenishment Ship: Following the 1957 review there were eight replenishment ships in the long-term plans, these could be nuclear powered and the option existed to have a smaller number of larger vessels. The reason for the replenishment ship being proposed seems to be that the Admiralty thought they could get the AEA to use it's funds for the development of the reactor under the auspices of an associated civilian ship propulsion programme. The Admiralty apparently having no intention of funding such development itself.

75,000SHP Destroyer Plant: Dating to 1958 this appears to have started out as a generic study into nuclear propulsion for warships that quickly focussed on a hypothetical plant for the Hampshire class, the report is incredibly detailed and culminates in a very detailed machinery space layout for a CONAG plant. However, the reactors are anything but detailed, there is discussion of different reactor types but the ultimate drawings just show empty boxes with the relevant SHP written in them. This study may have been where some of the nuclear propulsion configurations referenced by Friedman in relation to NIGS came from.

1964 45-50,000 SHP reactor: Circa 1964 consideration was again being given to nuclear propulsion for surface ships. The RN is talking to Babcock and Wilcox about it's Consolidated Nuclear Steam Generator (CNSG) reactor, looking at development of the existing submarine plants and a proposed AEA Burnable Poisons Reference Design (BPRD). Thinking was that one such reactor could be used to propel frigates, two could be used to propel cruisers and three could be used to propel carriers so that the RN would only need one reactor design.

Nuclear Type 82: This was inspired by the 1965 cancellation of the nuclear powered merchant ship by the Ministerial Committee on Economic Development. A steering committee was set up and it suggested a £350,000 9-12 month sketch design of a nuclear powered Type 82. However, prior to the study being started it was decided to link it to ongoing submarine reactor R&D. By now the T82 had been capped at one unit so a ship representative of those to be built in the future would have to be used. There looks to have been no intention to build such a ship, rather it was an exercise in developing a detailed design that could be compared against an actual conventionally powered vessel with otherwise identical characteristics. The RN had been hoping to learn about nuclear propulsion by observing AEA funded projects, when this option finally disappeared they looked at funding their own study.

Small Ship Nuclear Propulsion: A 1968 study looking at nuclear propulsion for smaller ships concludes that a 4-5,000 ton deep displacement warship with a single reactor CONAG plant of 35-45,000 SHP installed power is viable. I only found the report itself but it is tempting to believe that the report was the end result of the nuclear Type 82 study referenced above, with the T82 capped at one unit future frigates would be smaller.

In summary, the nuclear powered replenishment ship was probably something the RN was only interested in if someone else was paying the reactor R&D costs. Aside from that, there was very significant interest in nuclear propulsion for warships for at least a decade, the study work was detailed and rigorous and came to some very interesting conclusions. In the end though, there never seems to have been a truly serious prospect of the RN adopting nuclear propulsion for surface ships.
Last edited: Mar 29, 2020
U

JFC Thank you for getting this excellent and comprehensive round-up of RN surface ship planning.
The US experience of building and operating nuclear powered escorts reinforces the view that it would have been too costly as well as down sides like not being welcome in certain countries like New Zealand.
Even the mighty USN didnt deploy nuclear powered supply ships, though when NS Savannah was built they might have planned them.
CVA01 would like Charles DeGaulle have been a candidate especially as the RN gave up steam boilered ships, but costs and controversy made it a non starter.
A nuclear County or Type 82 would be one for Hood or Tzoli

Yes when this Virus fiasco is over (either by running it's course or a cure was found) I would like to hear more about those projects!

I thought that this had already been posted somewhere but apparently my memory is playing tricks on me again. Via the C3L Security blog: 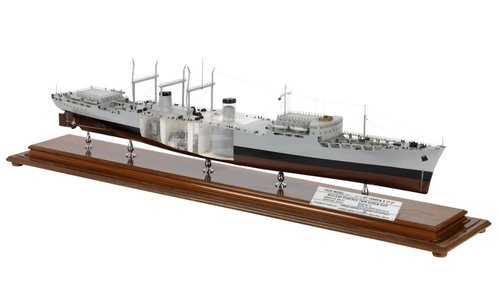 EDIT: Ack! My memory wasn't acting up after all, A Tentative Fleet Plan had posted a link to images of it already!
Last edited: Apr 14, 2020

Some information on the nuclear powered SIGINT ship project, which examined both clean sheet designs & ultimately (and perhaps rather unwisely) a conversion of an existing carrier, can be found in this thread. Cover designation was 'Communications Trials Ship'.
C

Slightly off topic, this is a design for a reactor for a nuclear submarine (thread drift, since obviously not a surface ship) presented at the Harwell Power Conference of 1951. It was graphite moderated and cooled with helium. For a variety of reasons, this was not a particularly practical design.

Putting it into a submarine would be something of a challenge. It does seem rather susceptible to damage in the case of depth charging. Raising steam from such a reactor would probably take quite some time. No examination is made of the nature of the fuel rods, and as we later found out from DRAGON, using helium as a coolant is not the easiest of propositions. 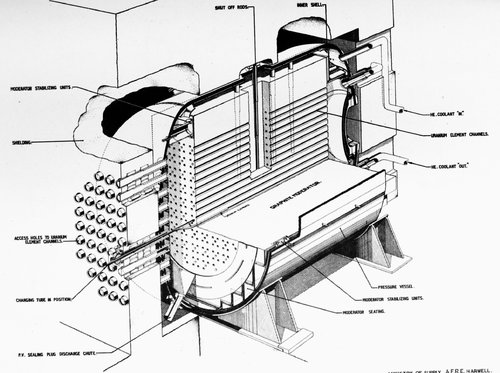 I was also rather amused by a further follow-on memorandum: the boffins had decided that a liquid metal cooled reactor might do the job. A report was prepared and sent to the Admiralty. The First Lord of the Admiralty (a political appointment of cabinet rank), who had asked to be kept up-to-date, and was sent a copy of the report, wrote on it, rather plaintively,

'Can someone explain this to me in simple language?! JPLT' 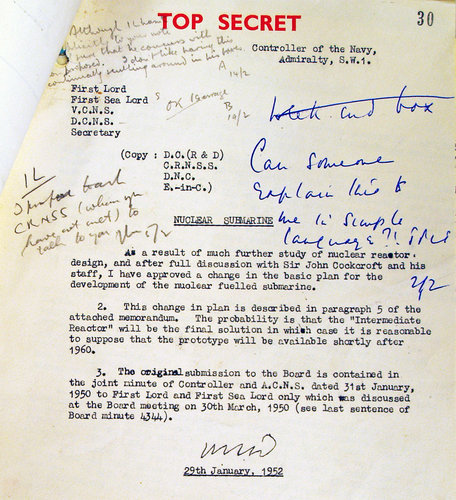 Mind you, this is as nothing compared with the Scottish MP who asked a question in Parliament, referring to nuclear power for ships, as to whether:

‘Can the Minister say how long it will be before this power could be available for fishing trawlers?’

CNH said:
Mind you, this is as nothing compared with the Scottish MP who asked a question in Parliament, referring to nuclear power for ships, as to whether:

‘Can the Minister say how long it will be before this power could be available for fishing trawlers?’
Click to expand...