You've beaten me to it, though my source was the Daily Telegraph: http://www.telegraph.co.uk/finance/newsbysector/industry/defence/11833043/Dreadnought-2050-Heres-what-the-Navy-of-the-future-could-be-sailing.html

These types of pics sure are popular for depicting "Future Warfare". I recall seeing similar pics as far back as the ATF program but those would show the airspace over the battlefield. One picture had a giant room with people walking around the perimeter and the holographic "display" filling the room (though that one may not have been ATF specific).

Interesting to compare this concept to the DCNS Swordship.
http://www.secretprojects.co.uk/forum/index.php/topic,1498.0.html
B

Thank you Bgray
Seems to show a railgun with such a small diameter as to be only useful for defense not bombardment.

Amazing concept,thanks alot everyone for posting these images.

jsport said:
Thank you Bgray
Seems to show a railgun with such a small diameter as to be only useful for defense not bombardment.
Click to expand...

It's really hard to read scale on this, but that gun could easily by in the vicinity of 120 to 150mm, which is plenty big for a railgun, where muzzle energy matters more than diameter. The USN's current 32MJ demonstrators have bore sizes around 60mm, and that's plenty of muzzle energy to hit shore targets as well as aerial ones.
B

I have to admit that article lost a lot of credibility for me when it put up art for nationstates.

But it does open a question-- is there a good reason to have more than one railgun, especially if the main limited issue is power?

A couple. First, redundancy. Any technologically complex system is libel to fail, so having a second is a good idea. Second, coverage. There will still be blind arcs and gaps in coverage for a single weapon.
I

Considering we don't have the brains to put a cat and trap on an aicraft carrier, this for the RN will come out a wooden row boat and a few balloons.

'Stealthy that mate, like the wooden mosquito! Pukka!'
J

jsport said:
Thank you Bgray
Seems to show a railgun with such a small diameter as to be only useful for defense not bombardment.
Click to expand...

It's really hard to read scale on this, but that gun could easily by in the vicinity of 120 to 150mm, which is plenty big for a railgun, where muzzle energy matters more than diameter. The USN's current 32MJ demonstrators have bore sizes around 60mm, and that's plenty of muzzle energy to hit shore targets as well as aerial ones.
Click to expand...

one can either bombard well (large diameter) or defend well (small diameter). Even 120mm is poor bombarment when you dont many guns.
P

jsport said:
one can either bombard well (large diameter) or defend well (small diameter). Even 120mm is poor bombarment when you dont many guns.
Click to expand...

Is there some particular reason why you cannot "fire" a very long projectile from a railgun? More payload, less drag.

Another article on the design from back in 2015:

Warship of the future designed by young engineers

A series of futuristic concept images on what a new surface ship for the Royal Navy could look like in 2050 has been released.

The design was derived from an informal challenge – Startpoint – organised by the Ministry of Defence (MOD) and Royal Navy to examine future concepts, with young British scientists and engineers from industry, MOD and Royal Navy all contributing.

Starting with the battle management nerve centre of the ship – the fighting heart of a ship known as the Operations Room – the concepts were developed by a number of young science and engineering graduates from both the private and public sector who were asked to visualise what an Operations Room would look like, and how the actual ship itself might appear.

The Operations (Ops) Room – the fighting heart of a ship – has been developed around a 3D holographic command table and communications hubs to provide the crew with greatly improved situational awareness when engaged in future operations.

The command table could be rotated and zoomed, to allow commanders to focus on specific aspects of the battlefield be it in the air, on the surface both at sea and on land, or underwater.

Additional, smaller holographic pods would allow the crew to manage those specific environments in greater detail.

An operation could be commanded from within visual range, to thousands of miles away from the ship; all managed by five or six people. Any information could be transmitted in real-time, secure voice, video or data to wherever it is needed, be it the UK joint headquarters, NATO or other allies.

The ship would be a trimaran, made of ultra-strong acrylic composites which can be turned translucent to give commanders in the Ops Room a view of close-in operations.

The power would either be a fusion reactor or highly efficient turbines driving silent electric motors to waterjets; the hull would be coated with graphene to cut down drag and could be ballasted down to present a stealthier, lower profile.

The ship would not have a conventional mast but a tethered quad-copter which could be flown above the ship.

This tether would be made of carbon nanotubes and cryogenically cooled in order to transmit significant power to the quad-copter for multi-spectral sensors and act as a high-power (i.e. laser) weapon to knock down enemy missiles or aircraft.

There would be an electro-magnetic railgun at the bow, capable of firing projectiles the same distance as today’s long-range cruise missiles; and at the stern there would be a ‘moon pool’ or floodable dock area to deploy Royal Marines and other troops on amphibious raiding missions, or unmanned underwater vehicles (UUVs) to detect mines.

Above the floodable dock would be a large, extendable flight deck and hangar for multiple remotely piloted air systems (RPAS/UAVs) – many equipped with weapons – which could target the enemy without putting the crew in harm’s way.

And along the ship’s sides would be missile tubes for defensive hypersonic (i.e. Mach 5 plus) missiles, directed energy weapons to stop small enemy craft loaded with explosives; and in the armas (the outrigger hulls) would be torpedo tubes to fire super-cavitating torpedoes capable of 300+ knots.

Probably of most importance, the manning of this sort of ship could be brought down significantly. Where today’s modern warships have around 200 crew, a future crew could be brought down to as little as 50-100, with the Ops Room needing only five people rather than today’s 25.
Click to expand...

On another note, has anyone heard anything out of Startpoint recently? Last thing I can find on them at the moment is from 2018. 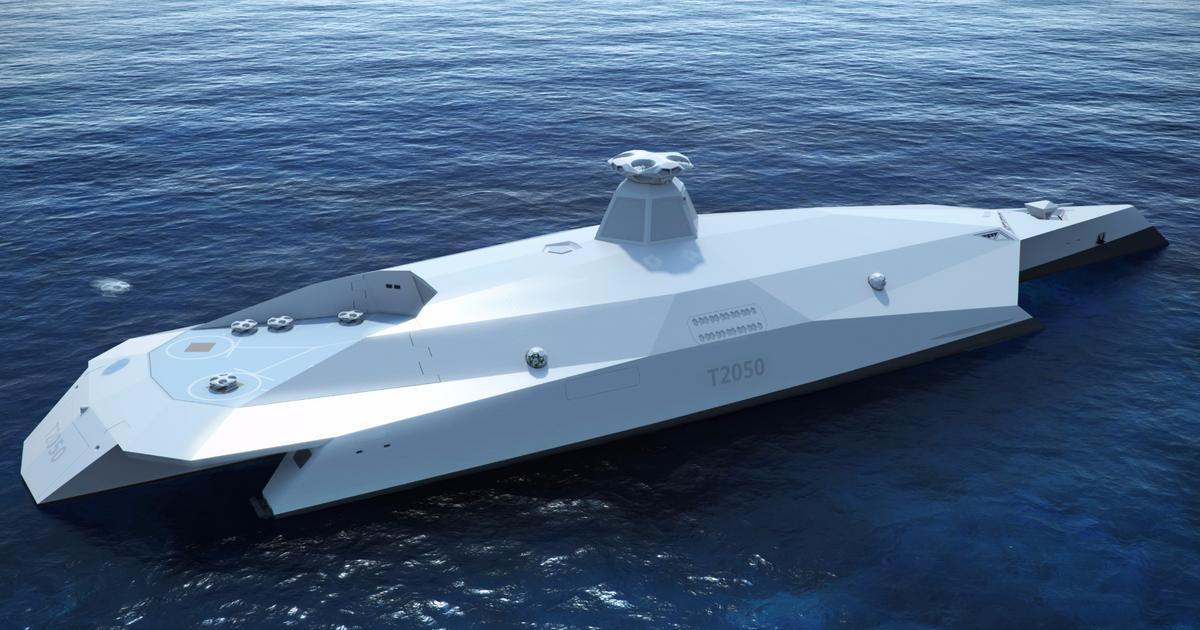 Startpoint project imagines the pride of the Royal Navy in 2050

In 1906, the battleship HMS Dreadnought entered into service with the Royal Navy. With her 12-in (305 mm) guns, high speed capabilities and other innovations, she rendered all other major warships obsolete. Inspired by this revolutionary design, the British Ministry of Defence (MoD) think-tank…

At the moment, the Dreadnought 2050 is a series of concept images that encapsulate many of the cutting-edge ideas that might make their way into a surface warship of the midcentury. If it ever is built, the Dreadnought 2050 would be 155 m (508 ft) long and 37 m (121 ft) abeam, which would make it about the same size as a Type 26 frigate.
Click to expand...

Grey Havoc said:
On another note, has anyone heard anything out of Startpoint recently? Last thing I can find on them at the moment is from 2018.
Click to expand...

The organisation behind Dreadnought 2050 is FutureNEST, the same lot responsible for manta-ray mothership submarines and 3D-printing, jetpack-equipped Royal Marines. I imagine that Startpoint was an earlier incarnation of FutureNEST.

A colleague of mine was involved in the latter two: their terms of reference are explicitly not to worry about the state of the art, and come up with ideas that will definitely need technological development. Most of what they come up with is expected to be totally impractical, but by getting people without too many preconceptions to brainstorm lots of ideas it's expected that some feasible yet visionary ideas will be produced.
P

It's a fair point - but then there is never a shortage of wild or wacky ideas anywhere, you could achieve that brainstorming with a conference room at Abbey Wood and an offer of free biscuits!