From http://www.abo.fi/~mlindroo/SpaceLVs/Slides/sld054.htm
"Two Rockwell TAV concepts from 1980. The Trans-Atmospheric Vehicle would have the capability to routinely cruise and maneuver into and out of the atmosphere -- either to gain rapid responsiveness for military low Earth orbit missions or to attain very rapid intercontinental transport services from conventional military airports. The USAF Flight Dynamics Laboratory contracted with Rockwell and General Dynamics in the “Advanced Military Spaceflight Capability Technology Identification” program which investigated critical technologies in various ground- or air-launched systems."
Was always wondering how this stuff would look during operations in atmosphere - and voila, have found it in Steve Pace's 'B-2 Spirit. The Most Capable War Machine On The Planet' Of course, Pace's picture caption as usual are totally out of this world

Ahhhh!!! Markus Lindroos fantastic website!!! (albeit its form is rahter crude).
I've found this one four years ago while searching Space Shuttle original form (in 1969, before budget cuts) and Rockwell competitors on the project.
Some fantastic stuff there...
Sadly, it seems that this website hadn't been updated since 2001 ???
It could be cool having Mr Lindroos here no ?

The design shown is the MRCC (Multi Role Common Core) aerospace plane. Designed to be an F-111 replacement, it could be either launched suborbitally from the side of a Shuttle SRB; launched into orbit from the side of an SRB (with substantial additioanl rocket propulsion elements); or launched into orbit from the cargo bay of the Shuttle. It had one large rocket engine and two turbojets; the turbojets could be removed and replaced with more rocket propellant and OMS-type engines.

It's one of the first designs I drew up for "US Bomber Projects."

<...The next generation of advanced fighter aircraft
may be the last to operate exclusively in the atmosphere.
By the beginning of the next century, it may be technically possible to deploy
a vehicle that will be able to leave the atmosphere
and fly into low Earth orbit to perforn a
mission, fly back into the atmosphere to perform
another mission, and land conventionally. This
advanced aerospace plane (AAP) will potentially
be able to provide rapid global response and
perform a variety of missions such as strategic
offense, reconnaissance, strategic defense,
tactical interdiction. and show of force.
These missions may be enhanced by rapid and
versatile launching scenarios from the ground,
air, or in space. All applications of the AAP will require
effective hypersonic operations.>

At some point I plan on doing something with this.

Good work ! I had a better look at it back home.

WOW !! An almost carbon copy of my resin model kit ! Except for the wings that are almost horizontal on this version of wind test tunnel which seem to indicate it is a AAP from NASA that was not yet completely the AAP from NASA that we have seen before and which itself was yet more different from the MRCC TAV from Rockwell (the AAP where NASA was playing with shapes from the USAF as usual and trying various studies on it for their own purpose and for general aerodynamic science), and the jet engine fairings that are a little bit shorter, though it still is a quasi carbon copy from the model which i made from the official blueprints drawings from Rockwell to represent the better known Rockwell TAV MRCC version shown in the artist illustrations.

Below i show the comparison of the model kit without wings to have a better look, and with its typical canted up wings. The later studies of Nasa's AAP had mostly horizontal wings of a different shape than the actual Rockwell MRCC TAV. 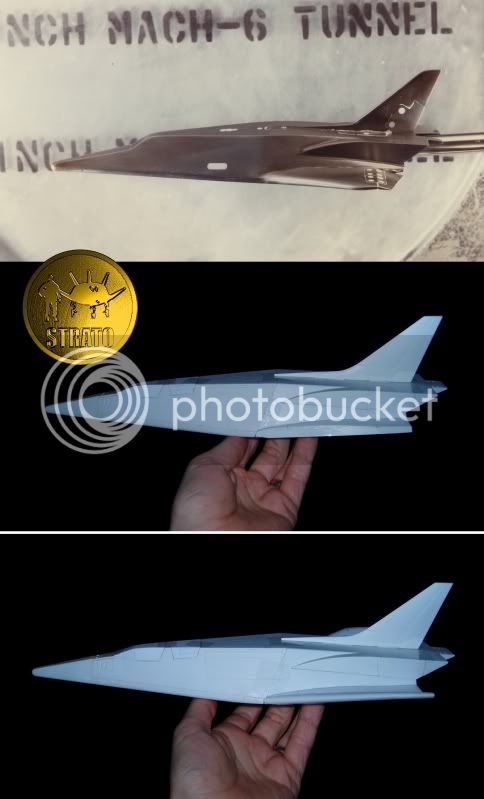 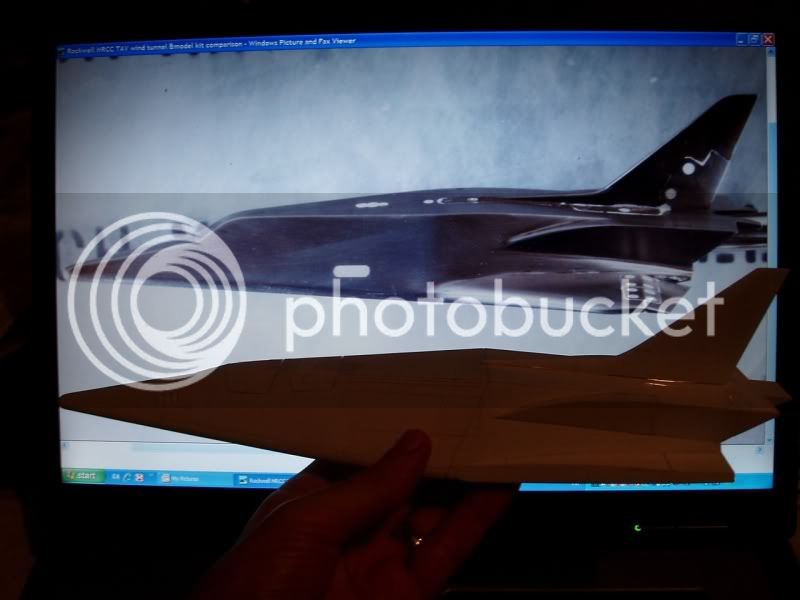 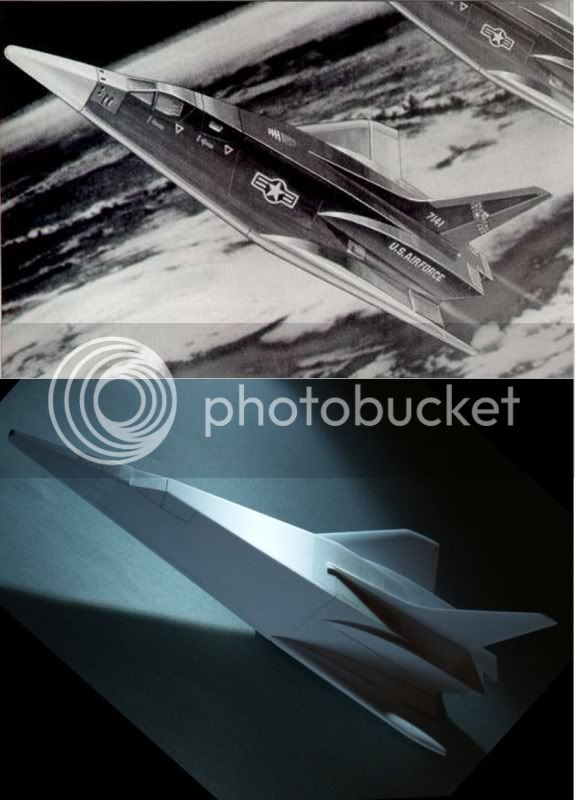 And for your enjoyment, a Gimp 'painting' i made, derived from one of the photos i took of my model: 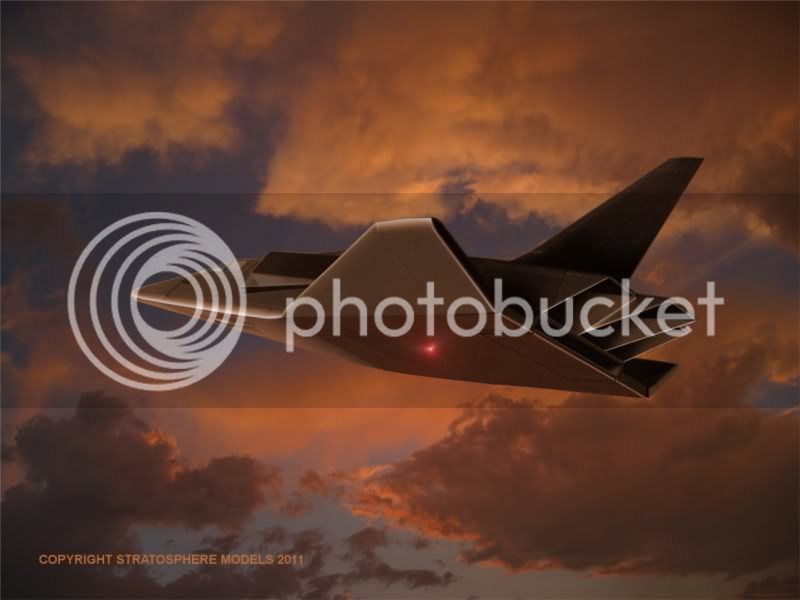 (You know that there are different versions of those wind tunnel models. I have seen one which is different from both this one and the blueprints which was a study where Nasa tried a different type of canopy and front fuselage, different wings, etc, to test the stability of said new configuration. The shape was not as good looking as the MRCC TAV from the Rockwell blueprints.

Desert Dawn said:
I have seen one which is different from both this one
and the blueprints which was a study where Nasa tried a different type of canopy and front fuselage, different wings, etc,
Click to expand...

Desert Dawn said:
I have seen one which is different from both this one
and the blueprints which was a study where Nasa tried a different type of canopy and front fuselage, different wings, etc,
Click to expand...

slightly different, it actually had the jet engine rear fuselage fairings not as blended with the fuselage as the artist illustrations and blueprint that we were familiar with before. It's in one of the AAP tech papers. So looks like the drawing you posted is also another itteration of AAP from Nasa, derived from the MRCC.

The TAV concepts from 1984; Lockheed,Rockwell and General Dynamics.

Public relations at Rockwell International sent me this image around 1985-1987 and it appears to be of a stealth fighter design - no design number or NA number came with though. Any thoughts? -SP

Scott, if you ever put that MRCC doc for sale, I'm buying it!

Steve, you can also check out here:

Something occurred to me today. And it goes back to something Scott said in a thread about putting a recoverable crew capsule atop an SRB for paying tourists. Well it made me wonder if there was variant of the MRCC considered for carrying passengers. Seems logical enough.

Seems like if the concept were fleshed out enough, you could have a semi-decent space tourism vehicle.

And Scott, if you ever put the MRCC doc up for sale, then you already have a customer.

An article on the MRCC:
http://www.aerospaceprojectsreview.com/blog/?p=1998

Scott, will the actual MRCC brief one of your Patreon goodies in the near future?