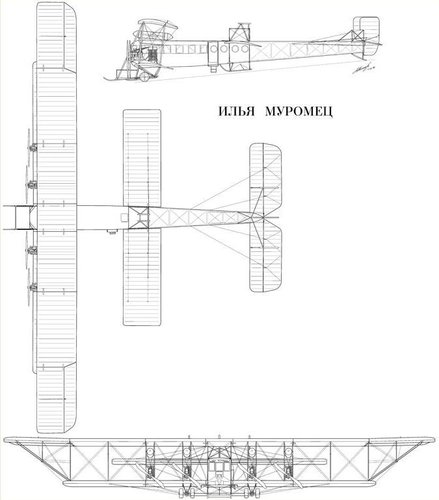 Specifically, the first prototype before it was rebuild as floatplane, 1913.

bigvlada said:
How many of these designs flew?
Click to expand...

Not many.
Of the true multiplanes with more than say four wings, the most famous is surely the Caproni "Capronissimo" nine-winged flying boat, having three triplane stacks in tandem. It crashed on its maiden flight, I cannot recall offhand whether through instability or structural failure.
Aerodynamically the most significant were the "venetian blind" types developed by the British scientist Horatio Phillips around 1900. In the late 19th century he had made major contributions to the study and theory of lifting aerofoils. He then developed an aerodynamic theory suggesting that multiple very narrow wings would be more efficient than a single large one. The first manned Phillips multiplane achieved a hop of around 50 ft in 1904. The next a few years later did a little better but fell way below his expectations or comparable conventional types, and in so doing it disproved his theory and he moved on to other studies.
Another was the AEA Cygnet designed by Alexander Graham Bell. Its wing comprised a fine grid of pyramidal cells and, when the Mk III finally got off the ground in 1912, it performed no better than Phillips' efforts. He paid back the Fates in spades by going on to develop that curse of modern society, the telephone.
Offhand I cannot recall any others.

One unflown design, which I here publish information on for the first time, was included in a provisional patent lodged by J.W. Dunne (of the tailless swept wing) in 1904. He had been working on wing rotors - flat horizontal-axis Magnus rotors which when stopped form wing surfaces - and had built models of them demonstrating automatic stability. These were the subject of his patent. One of the variants described was a multiplane assembly which formed a single rotor. What a sight that would have been! He was well informed and would have been aware of Phillips' work, so this would have been his stake in the ground had both their ideas come off. A copy of the provisional patent is in the Science Museum's Dunne collection and I have a photocopy of it. But there were no drawings to thumbnail and copyrights forbid any sensible posting of the text here, sorry about that.
Last edited: Aug 12, 2019
E

richard said:
I think , but I am not sure , that Mr.Lake was the designer : We must wait for more info from an italian speaking member ...
Click to expand...

Yes the editor(s) noticed some similarities with the Robiola multiplane (1911, tested without success in Turin) and sent the photos to Robiola himself... he states that it is a shameless copy of his own project and the discussion continues about the possibilities of an almost-VTOL aircraft in a period where no helicopter had been successfully tested.
Robiola built a real multi-plane, V shaped and composed of some ten rows of blinds (like the sunlight partializers used to cover windows or the devices used to deviate the airflow in a fan).
He also published a small booklet about his invention (he was a doctor) and today this booklet is available only in one library here in italy.
In the last ten years I did not have time to go there (some 400 km from my home ) and scan it, but it is likely that the pictures in the booklet are the same reported in this thread.
Another photo of the robiola multiplane is available in an old italian book - I will rescue it in the next week.
E

here is the picture from an antique Italian book: 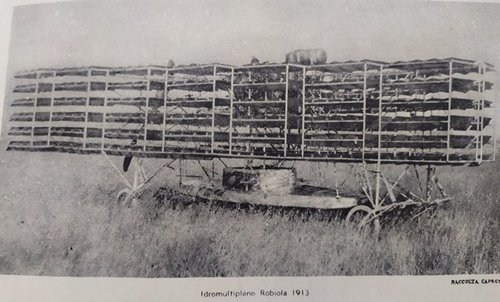 it is truly a multiplane

Reproduction of the Wight Quadruplane in the Solent Sky museum in Southampton, England. A little information here: https://en.wikipedia.org/wiki/Wight_Quadruplane

Larry HALL Quadraplane in the late 70s.
(Is a 3V drawing of this hang-glider available?)

No 3-view (as far as I know), but here's a really good article which contains several large photos, plus a set of dimensions:

Fascinating and very well-informed piece, a brilliant find. Thank you.

On August 17, 1916, Ryszard Kwapuliński applied for a patent in
Germany for an airplane with a chamber structure. He did not receive t
he patent. The solution was only protected by Utility Model No. 653,475.

In the absence of data, it can only be assumed that the matter concerned
the technical solution of a multi-wing aircraft, the connections of the
airfoils or the truss structure of the fuselage, stiffened with struts and
wire or wire ties. The commonly used aircraft construction solutions
were probably adapted, introducing a number of modifications that
did not bear the hallmarks of technical novelty.

A few multiplanes were built before aerodynamicists understood 3D airflow, Reynolds numbers or interference drag from other nearby airfoils.

If we remember that wings fly because they develop a high pressure air mass below the wing and a low pressure air mass on top of the wing. If those wings are more than 1.5 chords apart, interference drag is minimal. Biplanes' primary advantage is low structural weight afforded by the deep girder created by the two wings along with a plethora of wires and struts. Those wires do not create significant drag until an airplane exceeds 100 mph.

Tzoli said:
But weren't there any biplane projects from the jet era? Featuring jet engines and or delta or swept wings?
Maybe not for fighters but for those planes which need to lift large amount of mass like bombers and cargo planes?
Click to expand...

The Polish PZL M-15 Belphegor was a jet-powered biplane for agricultural use, and was built in moderate numbers. The biplane configuration was chosen so that it could fly slowly, but the use of jets made it expensive to operate.

I never heard of any others (but see below). The fundamental reason is that biplanes and jets are suited to opposite ends of the performance envelope and do not meet in the middle.

Braced biplanes only make sense up to around 200 mph, when the extra drag starts to dominate performance. Unbraced wings are far more efficient as monoplanes; half the tip losses, twice the structural depth. Jet engines are only efficient at high speeds; below around 300 mph propellers are more efficient. So you get a lot of prop-driven monoplanes in the 200-300 mph bracket, but not a lot of jet biplanes.

One notable theoretical exception is the Busemann biplane, a supersonic biplane which eats its own shockwave, thereby drastically lowering wave drag during the cruise. However the drag-free condition is unfortunately also lift-free, so compromises have to be made. Things like payload and engines require further compromises. To my knowledge, nobody has ever flown even a test model.

My knowledge on aircraft related technologies seems limited. But I thought biplanes offered the extra surface area for flight when power or speed was scarce so I though increasing the power but remaining with biplane layout you could increase the transportable weight without using long and wide wings.
A

The Messerschmitt P.1109/2 could be thought of a jet-powered biplane. This project was one of a number of radical proposals put forward to the Luftwaffe, towards the end of WW2. Given the complications created just by using a slew-wing in the first place, having two of them - so that one could off-set the other - did made sense. It does seem to be a very particular solution, to a very particular set of needs, though.

Another jet powered biplane - a real world one - was the Polikarpov I-153DM. This was a standard I-153 biplane fighter fitted with two additional ramjets. Top speed increased by as much as 50kph.

Tzoli said:
My knowledge on aircraft related technologies seems limited. But I thought biplanes offered the extra surface area for flight when power or speed was scarce so I though increasing the power but remaining with biplane layout you could increase the transportable weight without using long and wide wings.
Click to expand...

There are three ways to increase lifting area on an unbraced (cantilever) design: longer span, longer chord (front-to-back) and more surfaces. Longer span is aerodynamically the most efficient, longer chord is structurally the most efficient. The biplane leaves you both draggy and heavy, the worst of both worlds. If greater lift is needed without increasing wing size then high-lift devices deployed at lower airspeeds will deliver lower drag in the cruise than a long-span wing, for less weight increase (In a certain sense they act as retractable second wings).

I read some-where that, though not recommended, it happily ran on tractor fuel rather than avgas, while the nimble biplane configuration was usefully stiffened by those big 'between the wings' spray-tanks as structural members, and 'trad' prop-wash would have reduced spraying precision.