What about the Bel YFM-1 Airacuda:

JohnR said:
What about the Bel YFM-1 Airacuda:

Avimimus already mentioned it on his "List of known cruiser fighters".

redstar72 said:
Анатолий, большое спасибо! Thank you very much Anatoly!
The DG-56 is a very elegant aircraft. Unarmed it looks like long-range racer .
Click to expand...

Well, by the way it's the Grigorovich LK-3 to my collection.
Thanks, Анатолий

Does anyone have more information on the Grokhovskiy G-52 "Heavy Cruiser" derivative of the TB-3? I'm curious as to how the 76mm were supposed to be employed. Were they fixed forward firing or mobile? Were they intended for purely air-to-air use or where they dual purpose?

G-52 - Grokhovskiy's was a serial TB-3 aircraft powered by the M-17, which in the nose fuselage was installed anti-aircraft gun, 76 mm sample in 1931, and in the wings - two 76-mm field gun model 1927
Guns revived manually. (12 shells on each wing cannon / 20 shells from central) thickness of the wing allowed to remain in the artillery guns (sitting with his back to the wing leading edge).
It was assumed that the group "flying batteries" will be ahead of the bombers and clear the way for them from enemy fighters, balloons. Also, G-52 could be used as a "destroyer of order" enemy bombers. Having a large range, he could fire from outside the effective destruction of their weapons. Besides the large ground targets: airfields, bridges, junctions, etc.
There was another project by Grokhovskiy, he also uses the constructive nodes TB-3, but with a NEW, much narrower fuselage, in which there is no unnecessary bomb bay. Wing guns sought to make mobile (suspended), to supply the artillery range finders and sights ...
sources: 'Kryl'a Rodiny' #7,1992
V.Kotelnikov-"Flying artillery batteries"- Aircraft - giants of the USSR

G-52 was funny and fascinating aircraft for actual times !

Do you have a designation?

Orionblamblam said:
Now *this* was a "battleplane..."
Click to expand...

Avimimus said:
Do you have a designation?
Click to expand...

Avimimus said:
Do you have a designation?
Click to expand...

I seem to remember a French proposal for large "flying fortress" type fighters. These aircraft would be considerably larger and better armed than the Caudron series.

It would have been right at the end of the Great War (service dates 1919-1920). However, I can't remember or find anything else.

The Blériot 270 unbuilt project of 1931 was a French “croiseur aérien” (aerial cruiser).
E

I've heard about the Leotord series, but I've never seen any photos or drawings. Does anyone have some they could post, I've like to know what this aircraft looked like?

Could it be that you mean ' avions Letord ' instead of LeOtord...?
T

In case this is Letord, I have things in my Trait d'Union collection:
(A: article, M: mention, D: drawing, P: photo)
but Google may help too I don't know.

This photo appeared at a CFS2 Forum. Seems to be an experimental Potez 65 variant...

About ten years later than my mysterious memory - but still excellent to have on the list.

It would be nice to have more information about some of these designations.
T

The source was the old huge book about Blériot aircraft (Maeght publisher, 1994). It has now been printed again, updated and supplemented with SPAD aircraft, in the Docavia collection. If someone has this new printing, he/she could tell us if the date 1931 is confirmed or corrected for the Blériot 270.
I

igor-mich said:
Dear Borovik not tell when the book is scheduled for release on Maslow Grigorovich
Click to expand...


The book is laid/page-proof out a year ago.
Problems have arisen at the publishing house which was the primary arrangement. The search for potential publishers continue ...
Chapters of the book is already possible to read in the current issue of a magazine "Wings," #7 p.86-93
Подробней в личке

Nonetheless, here are couple of examples of the XB-41 photos: 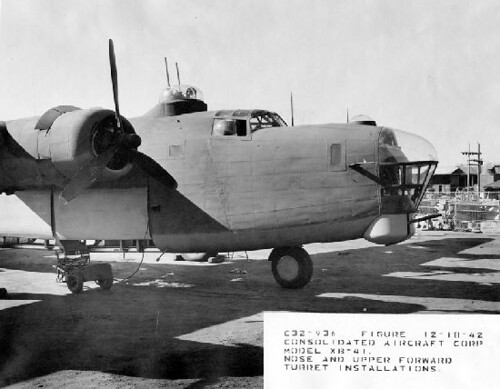 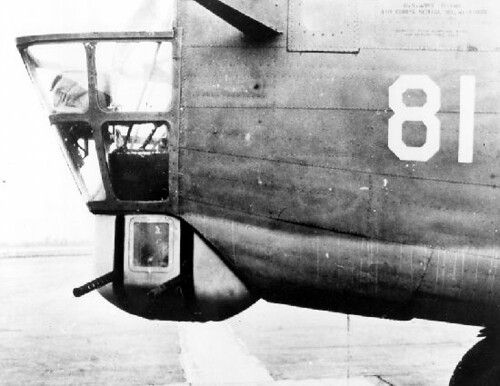 Wouldn't the rotating turret with multi-position sighting and firing capability of the P-61 put it at least close to this category?

I recently found a reference to bizarre WWI fighter proposals built around the Davis Recoilless Rifle. I was wondering if any of them would qualify?


Wasn't the Pemberton Billing PB.31 (you mentioned it in post #1) armed with a Davis gun ?

Thanks - it is really neat to see the modeller's visualisation of an armed aircraft!
S

I'm really sorry hesham but I know very little about first World War aircraft, so I was hoping that perhaps someone would identify it...

I'm really sorry hesham but I know very little about first World War aircraft, so I was hoping that perhaps someone would identify it...
Click to expand...


but may be this aircraft was Let.6,which was an escort fighter,considered the only
Letord design to be a fighter.

hesham said:
but may be this aircraft was Let.6,which was an escort fighter,considered the only
Letord design to be a fighter.
Click to expand...

However, I believe I'm correct when I say that the A3 requirement was very much viewed as 'multipurpose'. The boundaries between different types of aircraft were vaguer in WWI.

The similar three-seat Caudron R.4 apparently was quite effective in air combat "Escadrille C.46 claimed 34 German aircraft brought down with its R.4s in an eight-week period" and the R.11 and R.14 were used for escort.

However, my favourite aircraft designed to this requirement was the Salmson Moineau S.M.1:

Interesting engine installation ! Mounting radials in the fuselage wasn't tried too
often, I think. The only other example, that comes to my mind is the Morane Saulnier
TRK (http://www.secretprojects.co.uk/forum/index.php/topic,17792.msg169735.html#msg169735).
Maybe cooling problems ? Vibrations of the shafts ?

I believe that the primary issue in this case was increased maintenance (although vibrations may also have been an issue). More importantly, mechanical losses cancelled out much of the advantage given by the more complex arrangment. However, it seems to have performed as well as the other A3 aircraft on slightly less engine power. Information is hard to come by, but it appears that 155 may have been produced, some with 37mm cannons replacing the machine guns.

The design becomes even more interesting when you realise that there is only one engine: The shaft extends forward and backward to drive both propellers!

The Armstrong Whitworth FK 5, as reconstructed by Jemiba, with some help from me. Jens did all the heavy lifting. Source material from the Wesselink/Postma book.

During World War One, before the pattern of fast, furious aerial dogfights developed, many in England were proponents of a kind of 'flying battleship'. These people saw more merit in great number of weapons and firepower than speed and maneuverability. The result of this train of thought, which may have come from England's deep-rooted maritime tradition, was a number of big, heavy fighters being built, which did not advance to more than one prototype each.

These big fighters offered room for a pilot and a number of gunners and generally appeared very strange, like, for instance, the Sopwith L.R.T.Tr three-seat triplane and Vickers F.B.11 three-seat biplane. Without a doubt, the strangest aircraft to emerge from the previously mentioned train of thought was Frits Koolhoven's FK 5 design. The FK 5 was a triplane too, and it featured two middle-wing mounted gondolas, in each of which a gunner could accomodate himself with a machine-gun to do battle with the enemy. To provide the gunners with an optimal field of fire, the gondolas protruded a good length ahead of the propellor, which turned mere centimetres away from the wing's leading edge. The pilot sat behind the wings, because of which he only had a good view... upward.

However, Fairbairn-Crawford, Koolhoven's superior, did not trust the craft one bit and refused to give permission for the first flight. A serious row ensued with Koolhoven, but he pressed on anyway. After some test flights, which, as shown in the accompanying photos, went anything but smoothly - the craft crashed at least two times - the project was put on hold. It was only resumed when the English ministry of war communicated its desire for a multiplace escort fighter, which could also serve to tackle the Zeppelin airships that regularly bombarded England. The FK 5 design was altered in such manner so it could perform these tasks. The aircraft that now emerged, designated FK 6, was bigger than the FK 5. The engine and propellor were positioned further away from the wings; the pilot, again seated behind the wings, had a slightly better view - but stellar it still was not. It is possible the two machine-gun gondolas, now mounted below the middle wing, were designed for the Davis gun. Armstrong Whitworth had in fact, in April 1916, received two wooden models of this gun, one for 2 pounds shells, one for 6 pounds shells, in order to, according to official documents, 'equip a large aeroplane, now building for the ministry of war'. This aeroplane can only have been the FK 6. The 23rd of March, 1916, four FK 6 aircraft were ordered, which were to receive serial numbers 7838 through 7841. The numbers 3684 and 3685 were also mentioned in connection with the FK 6, these were to apply to two aircraft for the Royal Naval Air Service. Unfortunately, it is not known whether this concerned two of the four aircraft already ordered, or two additional aircraft. The two aircraft were expected by the RNAS in March 1916, but after November of that year the numbers are no longer mentioned in any publication. It is well possible this is connected to the fact that, around that time, it had become clear that the big, heavy fighter had shown itself to be a mistake and therefore only one FK 6 had been built, the '7838'. Not much is known about the aircraft's test flights, conducted by Lieutenants Peter Legh - who would follow Koolhoven to British Aerial Transport Ltd. and fatally crashed the BAT FK 25 'Basilisk' - and R. Payze. It appears the tests were conducted in slapdash fashion.

During the few flights made, it became readily apparent performance anything but met expectations. Interest in the aircraft had evaporated anyway - the competing Vickers and Sopwith aircraft met the same fate - and development was soon abandoned, which also had to do with the new availability of synchronising gear for machine-guns, which enabled shooting through the propellor-disk.

Presenting the material took a little longer because of my intervening expedition to see two Lancasters in formation over Duxford.