Flight, 21 Aug 1941, has a brief article on a planned Ford aero engine. Other than being a fuel-injected, turbocharged V12, there are not many details of this engine. Photo of engine mock-up attached.

Engine History picks up the story in "Aircraft Engines in Armored Vehicles":
http://www.enginehistory.org/featured_engines.htm

Ford Motor Company thought it would be easier to produce an aircraft engine of its own design than to license-build the Rolls-Royce Merlin. A revolutionary and innovative 60° V-12 was designed and built, but before it could be fully developed, the US became involved in World War II. Ford removed four of the cylinders, resulting in a 60° V-8 for tank use that developed 450 hp @ 2,600 rpm. Several variants were produced [the GAA, GAF, and GAN].

BTW, the Guiberson T-1020 9-cyl radial diesel is also mentioned on that page. If anyone is interested in the A-1020 aircraft engine see http://www.enginehistory.org/Diesels/Ch3.pdf for details, photos, and diagrams (including sections).

FYI a GAA website here... extracted a x-section of the 36" high engine from there.

"During World War II the Defense Department placed orders for Navy engines with similar specification to the Merlins and Allisons. Ford responded with their design. Ford had developed an aircraft engine similar to that of the Rolls-Royce Merlin and Allison engines of that era. It was a 60 degree V-12 with aluminum block and head, dual overhead camshaft, and 4 valves per cylinder. The intention of this design was to help Ford break into the anticipated large market for fighter engines. This engine was built to typical aircraft standards: it was light, high performance, and highly reliable. Everything was safety wired or staked with close attention to detail on every part. Available information suggests this design performed well.

However, this engine never went into production as an aircraft engine due to the US Navy’s decision to only use radial engines for its aircraft, and the Army’s contractual commitments to existing engine manufacturers. With the approach of war, increasing orders for the M4 tanks were causing supply issues with the existing engine. The U.S. Army decided they needed to source an engine supplier, so Ford removed 4 cylinders from the design and it went into production as a V-8."

Earlier, the Harry Miller 1200 cid V16 (for Ford's 1935 Indy 500 entry) was also a twin cam design (and supercharged). That engine was then adapted as an IV-1200 for the proposed Rider-Miller racing aircraft. Did the later Ford aircraft V12 owe anything to Miller's V16s, I wonder?

If so, its odd that Ford stuck with the R-R Merlin under-square reciprocating dimensions.

Doing the math on engine formula gives you Merlin dimensions... nobody was copying ... also how do we know an engine (i.e. Ford) that did not go into production was reliable? The 3 A's apply Assumption> Assertion> Actuality
J

Ford evidently reckoned that they were 'improving' rather than copying, T.

They did not try to improve the R-2800, AFAIR - sticking to building the basic bomb-truck types..

So, the V12 was good enough for tanks.
& yet with all the other changes, - why did they stick with the Merlin long stroke recip' dimensions?
J

Apophenia said:
Earlier, the Harry Miller 1200 cid V16 (for Ford's 1935 Indy 500 entry) was also a twin cam design (and supercharged). That engine was then adapted as an IV-1200 for the proposed Rider-Miller racing aircraft. Did the later Ford aircraft V12 owe anything to Miller's V16s, I wonder?
Click to expand...

The engines of the 1935 Miller-Fords were naturally aspirated Ford flathead V-8s, Miller and his crew designed and built the
rest of the front-whell drive car, but did not create a new engine design for that program.

Thanks for the clarification Jon.

Colonel Green explained that the new Cromwell tank design was based on the use of the Ford V-12. It was the opinion of the committee that it would be impossible to consider quantity production of the Ford V-12 at this time.

Erm, that statement is a tad misleading. From memory, the Cromwell tank engine was the RR Meteor, a de-rated RR Merlin, usually time expired for aviation use then rebuilt for tanks. Ford built Merlins under licence in the UK.

Never heard of the Cromwell being designed for anything else than the Meteor.
As Nick Sumner says, its probably a carelessly worded statement.
K

George Allegrezza said:
Interestingly the GAA is enjoying somewhat of a revival in automotive circles. Aftermarket parts are being produced and modern engine controls and fuel injection have been utilized. Given that it’s a 60-degree V8, it’s not ideal for automotive use, but it’s prodigious torque output more than makes up for a few vibrations here and there.
Click to expand... 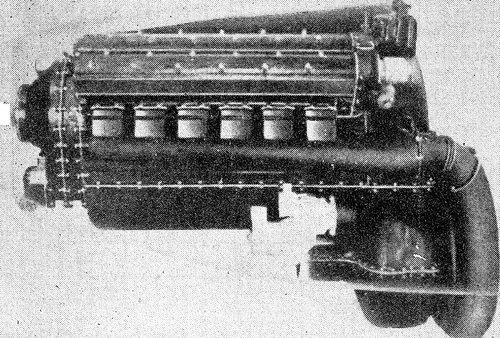 I have been slowly working on my US Tank Engine Book trying to fully cover the GAB and GAC engines, (currently working through 5 years of GAA and company V8 stuff) but I saw this and figured I would mention that in file I have that the V-12 for the Cromwell isn't an outside possibility as I have mentions for it. I'd have to double check things but the Ford GAY was intended for the Centaur and indeed 20 engines were shipped over.

I do know that the British had on order 6,500 Ford V12s before October 1942 when the GAC was to start testing and before the Feb 1943 intended production date.