I have this little brochure. It is a copy of the original proposal for the RLM. The part concerning the Ta-152 with the Jumo 222 is rather short. Which information do you need?
S

what kind of propeler was use by this variant?
I 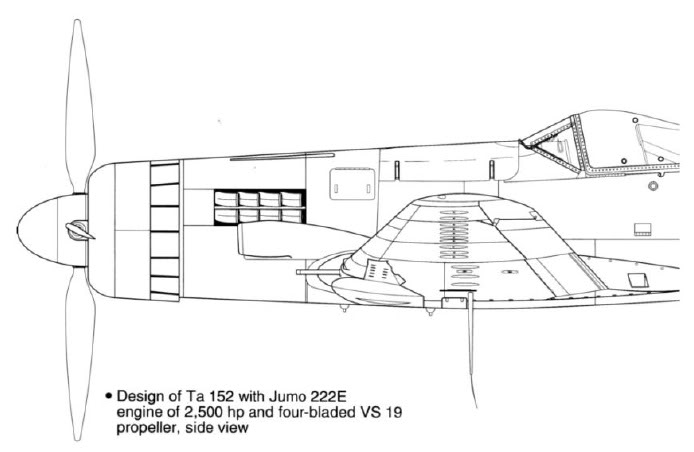 Edit: source of image is https://www.alternatehistory.com/forum/attachments/jumo222ta152-jpg.218967/
Vaguely remember it being on a Warthunder forum post but that has disappeared.

sgeorges4 said:
what kind of propeler was use by this variant?
Click to expand...

Imperialist is right. Although that drawing appears to be inaccurate.

danke schon!
I ask this because I'm going to do one with my hobby boss ta 152 C.
S

Is this a real document or not? 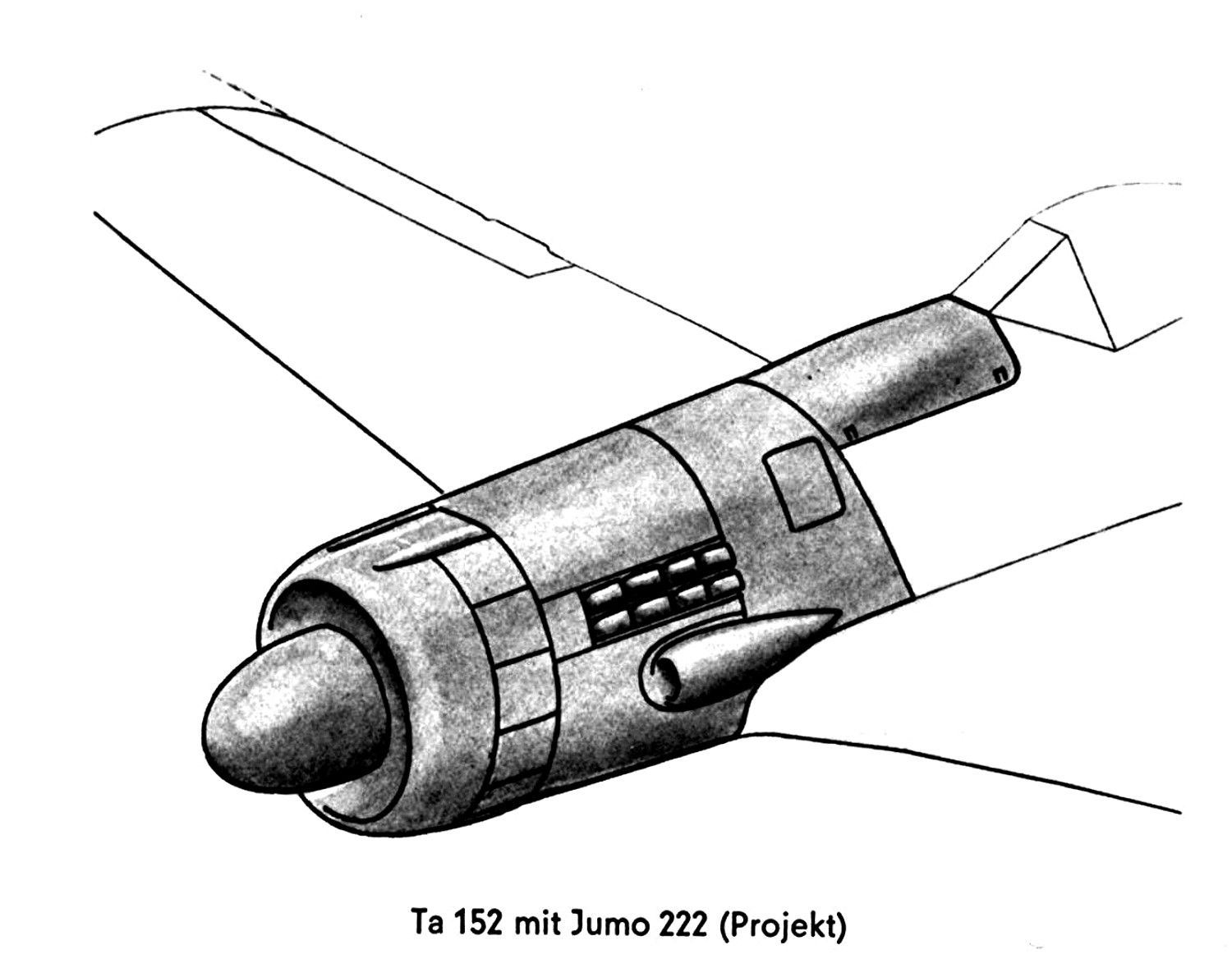 Real, but it dates from November 10, 1944, or earlier (see attached). Kurzbaubeschreibung Nr. 25 is dated December 4, 1944, and appears to represent the last word on the project.

By the way,do you have some other interressing drawing related to those document?

Do you have any historical document who refer to the fw 190 D12/R14 please?

From the April issue of Flugzeug Classic

what kind of turbo it have?

sorry for my english,I'm french and I try to improve myself.

what kind of turbo it have?
Click to expand...

No problem about your English. I try to do my best as well.

It's not a turbojet, but rather a turbocharger for the BMW-801 Version D radial engine.
This blue print shows configuration from early August 1942. It was never tested, because it would have meant a main shift of the center of gravity and the turbocharger would have been ripped off during a crash landing.
Focke Wulf selected then the configuration with the DB 603 and the turbocharger Hirth TK-11, which was developed into the test aircraft Fw 190 V18U1 CF+OY. It first flew on 20th December 1942.
Picture caption:

It's not a turbojet, but rather a turbocharger for the BMW-801 Version D radial engine
Click to expand...

Excellent reply, many thanks fightingirish!
S

I read in aero journal hors série3 that the german send the characteristic of the ta 152 to the japense,true or not?

Focke-Wulf Ta 152 high altitude fighter
In April 1945, the Japanese purchased the specifications for the Ta 152 as a means to rapidly acquire a high-altitude fighter. However, by this time there was simply no way for the Japanese to act on the material obtained.
Click to expand...

During late 1944 and early 1945 Japanese representatives in Germany exhibited a keen interest in this aircraft , an improved version of the Fw-190. In November 1944, the Japanese in Berlin were preparing to forward material on the TA-152 to Tokyo. By January 45, the Japanese Army representatives in Berlin had acquired an outline of the construction, general plans, a list of materials used in construction, and a list of equipment to be used with the Ta-152.

The contract for purchase of manufacturing rights for this aircraft was not signed until 26 March 45, although release was granted in January. A captured German Air Ministry letter, dated 5 January 45, authorizes the fulfillment of a Japanese request for rights to copy the Ta-152 C and H. The necessary drawings were to be prepared without delay -- at least general drawings if time did not permit the preparation of full blueprints. Those drawings were to be handed over independently of the signing of the appropriate contract. The plans and blueprints were forwarded to Kiel for shipment, but did not arrive there before 15 March. Transportation to Japan, therefore, is very unlikely."

Better quality of the 3-view that is in the first post of this thread and a slightly different cutaway side view. Both of these drawings have HJ Nowarra written on the back, maybe this seller has part of his collection?

Where those wing come from? 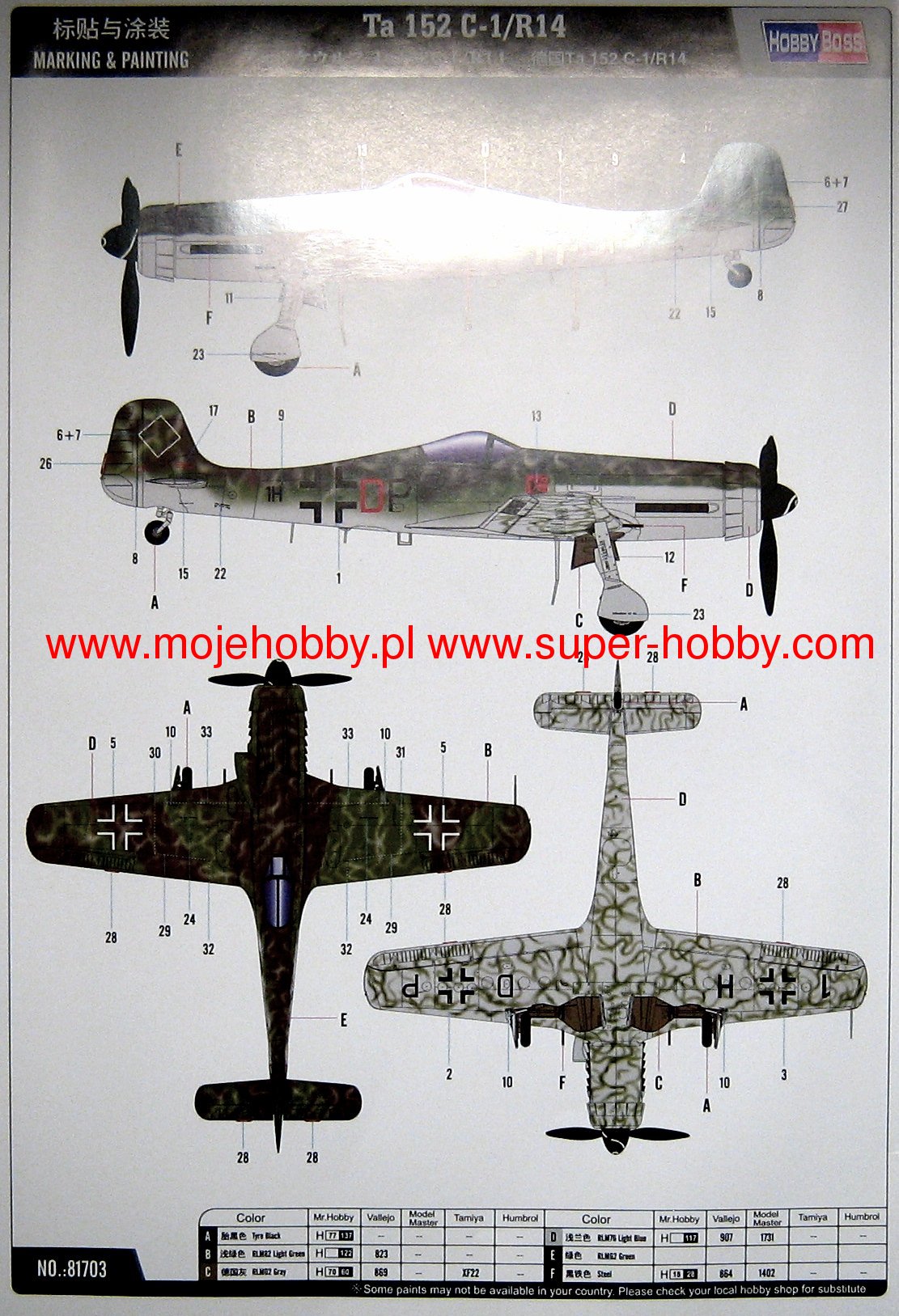 I wonder what performance improvement would have come when the Ta 152 had featured a laminar flow wing and Jumo 222?

spicmart said:
I wonder what performance improvement would have come when the Ta 152 had featured a laminar flow wing and Jumo 222?
Click to expand...

Welcome aboard Spicmart,and as I know there was still unknown projected versions of Ta.152.
S

Yeah. That thing really had development potential, call it "stretch". Given enough time it probably would have evolved into a space fighter.
I

Hi all I was wondering in regards to the attached image, what variant(s) form the basis of these turbocharged Fw-190? I'm assuming modified A and/or C variants? Also any data in the form of dimensions (such as if it used the 0.5m tail plug as well) would be greatly appreciated

There's the Fw 190 V18/U1 - no perfect match, but it does have the underslung turbocharger.
Photo from https://elpoderdelasgalaxias.wordpress.com/2017/04/10/focke-wulf-fw-190-v18u1-such-a-knockout/
Drawing by Ronnie Olsthoorn and text from http://fw190.hobbyvista.com/fw190v18.htm

Origins - FW 190 C Prototype
The FW 190 V18 was designed and built as a prototype for the high-altitude FW 190 C, and in V18/U1 form it had the DB 603 A engine driving a four-bladed propeller. The FW 190 C was a projected high-altitude fighter that never came to fruition; even so five prototypes were completed, the FW 190 V18, V29, V30, V32 and V33. Each of these aircraft had DB 603 inline engines, annular radiators, Hirth 9-2281 turbochargers and four-bladed propellers. The FW 190 V18 was coded CF + OY and received a white outline Balkenkreuz and Hakenkreuz. By 1944 the project had been halted by technical problems and opposition to use of the DB 603 (which was needed for other aircraft types)
[...]
The strange protuberance on the underside of the aircraft is the Hirth 9-2281 turbocharger. Note the nearly unchanged rear fuselage and canopy.
Click to expand...

Imperialist said:
Hi all I was wondering in regards to the attached image, what variant(s) form the basis of these turbocharged Fw-190? I'm assuming modified A and/or C variants? Also any data in the form of dimensions (such as if it used the 0.5m tail plug as well) would be greatly appreciated

Attached as well is my attempt to somewhat reconstruct what it would approximately look like (example aircraft variant is Fw-190 C-0 (V13)
Click to expand...

The images you show come from a report dated July 28, 1944, entitled Vergleich Zwischen Getriebelader und Abgasturbine fuer Einen Hoehenjaeger or Comparison Between the Gear-Driven Supercharger and the Exhaust-Driven Turbine in a High-Altitude Fighter.
This was a theoretical study to determine, as the title suggests, which sort of supercharger would be best suited to a high altitude fighter. The study was begun using an earlier project design as a basis - the design which featured in Kurzbaubeschreibung Nr. 10 Hoehenjaeger mit DB 605 U und TKL 15, dated August 7, 1943.
The upper side-view shows the version with the exhaust-driven supercharger (TKL 15, Geraet 9-2279), the lower side-view shows the version with the mechanically-driven supercharger.
The aircraft outlined in the 1943 report appears to show very few components in common with any existing Focke-Wulf model at that point in time. The cockpit is a pressure cabin with a canopy which, while it looks the same side-on, was actually quite a bit broader than that of the Fw 190 series. The dimensions of the Kurzbaubeschreibung Nr. 10 aircraft are - wing area 30m2, wingspan 14.4m, length 11.44m and height 4.8m. The length and span are actually very close to the dimensions of the Ta 152 H.
Incidentally, the July 28, 1944, report states: "Further consideration (Kurzbaubeschreibung Nr. 10) yielded, for optimum frame work layout in relation to rate of climb and horizontal speed: Wing area = 34m2, Span = 18m." This would have taken the design further towards the wingspan of the BV 155 - but there's no drawing of this 'reconsidered' version with the report. The drawings it does include (the ones you want to know about) show slight modifications of the Kurzbaubeschreibung Nr. 10 design only.

NB.
Which was actually best then, exhaust-driven or mechanically-driven? Well, the report concludes:
"A performance comparison for a high-altitude fighter design between a turbine engine (engine with exhaust-driven turbosupercharger) and thrust nozzle engine (engine with thrust nozzles and mechanically-driven supercharger) of equal critical altitude, has shown the superiority of the thrust nozzle engine from ground level to ceiling (H = about 17km) in rate of climb and maximum speed.
A difference calculation has shown the chief reasons for this superiority to lie in the different efficiencies of the propellers and in the weight difference of the aircraft compared. The weight difference is due to the turbine engine and its structural conditions."
So there you have it.

any original document/drawing regarding the serie variant of the fw 190 C?

Unfortunately there is no e-book version as a PDF of this bookazine available so far.
Edit: A PDF of this issue is floating around some German file-sharing websites.
Last edited: Apr 28, 2019
S 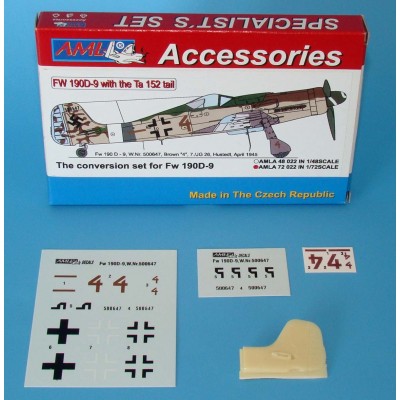 Attached are photos of 4 different unfinished models that I have. These are hand-carved out of wood, with very fine detail. I would like to identify them as accurately as possible (version numbers, etc.) Can one of you FW experts help?

Any assistance will be appreciated. Thank you, 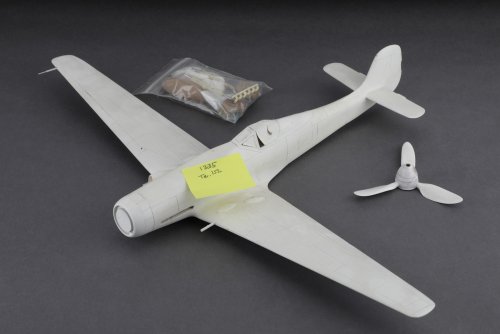 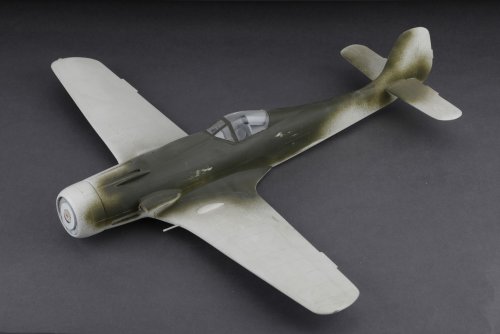 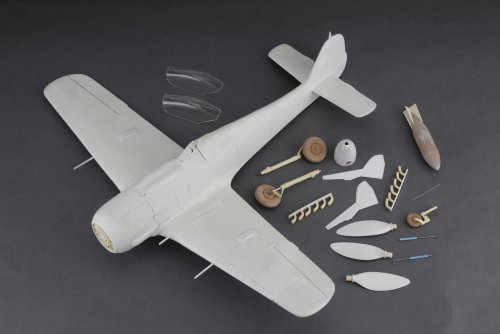 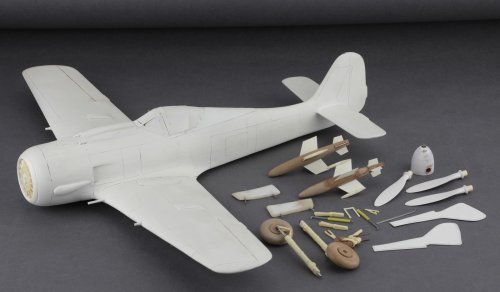 Thank you Galgot. Not sure about the scale, but the Fw.190 have an 18-inch (45.7cm) wingspan. The Ta.152C has its own bag of parts (not shown) which also contains hydraulic actuators. I like those strange missiles on the last Fw.190 – I really need to educate myself about this family of airplanes, but identification was an important first step. Thanks again.