That said some UK designs have a compact engine instalation, including some of the early P1103 studies, and of course a lot of the podded engine designs. It is not a simple matter, to say its not needed (long jetpipes) and its clearly not true to suggest UK firms did'nt know or try to produce designs with compact engine installations.

There is more than one issue affecting engine location.

In the mid 1950s, some designs stuck with centre mounted engines, primarily for balance reasons - even axial jet engines of the day were quite heavy. Given the tailless delta layout of the Fairey design, it probably helped to have the weight of the jet engine nearer the front - there were two rocket engines in the tail already.

Doing a bit of scanning I have come across two interesting little nuggets of information regarding the Fairey F.155T.

1) BSP Jet Fighters states that at the time of cancellation Fairey was doe to test a wing mockup for overwing air to air missile launchers. Were these an alternative to the underwing launchers or in addition to? And would they have been rated for just Blue Vesta or for Red Hebe, or even one of the smaller radar guided missiles then being proposed?

2) The skomer site mentions and RB.128 as an up-rated RB.122, then engine proposed for F.155T, is there any further information about this and its background?

Thanks in advance sealordlawrence.
Z

Who knows? Could be a special fuel type perhaps? About the right time for such an idea to ponder.

There is a apparently a sketch drawing of the RB.128 in the national archives though not held at the Kew site. It would be interesting to get ones hands on it.

The more I read BSP the more I am convinced that the drawings in this thread are not representative of what the final configuration would have been. The RAE was recommending considerable detail redesign, especially in the tail area, Fairey was to test an overwing missile carriage configuration and the avionics seem to have been anything but settled though the RRE was suggesting a 40 inch scanner which is suggested would have been a J-Band AI.23 derivative!
Z

Very likey your right, that back end is a bit clunky to say the least and needs work, even if we remove the rocket motors from the equations.

Overwing stores seem to be a British 'thing' for the times, Lightning got them, as did Jaguar. A common train of thought perhaps since it may be easier to design for the loads on the wing. Having designed the wing to take loads a certain point along its span, it might well be structuraly simpler to have a second pylon over the wing at the same position as the underwing pylon.

40 inch scanner sort of matches US efforts to get longer detection ranges.

You probably know this by now but it is new to me. In the dying days of OR.329, as it was beginning to be understood just how expensive the new types were* (Fairey's F.155T being considerably more expensive than the AW offering in an already very expensive requirement), a very quick study was done to see if the Fairey OR.329 type could carry the tactical atomic weapon (Red Beard) and 1,000lb bombs and thus be multirole. This interest appears to have gone no further than a simple, yes it can, before the whole OR.329 project was cancelled. I suspect this image came from that study or as a result of it.

Model of "Fairey Delta 3" on display at RAF Museum Cosford.

Anyone know if that's a temporary exhibition or a permanent addition to the museum? Looks very cool! B)

Skyraider3D said:
Anyone know if that's a temporary exhibition or a permanent addition to the museum? Looks very cool! B)
Click to expand...

It's still advertised on their web site. I hope to go and see it soon, along with the FD.2 allegedly in the same hangar.

The RAF Museum at Hendon has all Sir Richard Fairey's old aircraft papers, including these:

Be interesting to see what's in them.

Oh, and one reason the Delta 3 was so clunky was because it was a long-range high-altitude interceptor specialised for intercepting Soviet bombers. I rather think the RAF always wanted that performance edge, so a single-engined beast could not both cut it and also carry enough fuel.
Interesting to see how the wing seems to have moved to a more sensible position by the time the model was made. Perhaps the engine position did the same.

Very nice Dan. My camera of 8 years ago sucked in comparison.

I'll take photos in November when I'm there. Can't find any online so far.
H

I'll take photos in November when I'm there. Can't find any online so far.
Click to expand...

I took some photos on my visit in 2013, I'll see if they're any good and make them available.

I took ca. 100 photos. They aren't fantastic (white balance is off), but useful as a reference. For most of the models I also included the accompanying text.
The originals are 650 Mb when stored in a Zip file, I've uploaded that to WeTransfer, use this link to download them (available for 1 week from now, if you read this later, contact me via PM to get the files):

Thanks, I will upload later to forum!


White point issue should be fixable :

Here you go. Automated colour correction not perfect but better than nothing. Thanks Hobbes - this is the single engine version.

Very nice. Is that the BAC 221 behind/over the model?
H

Very nice. Is that the BAC 221 behind/over the model?
Click to expand...

Those photos were taken not long after the models were put on display, so I'd be surprised if they were dusty.

Edit: on closer inspection, I think you're right. You can see finger trails through the dust in some photos.

The models were put on display in June 2013: http://www.rafmuseum.org.uk/cosford/whats-going-on/news/models-of-cancelled-concept-aircraft-now-on-displa/ 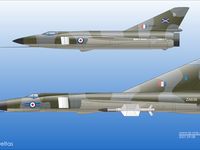 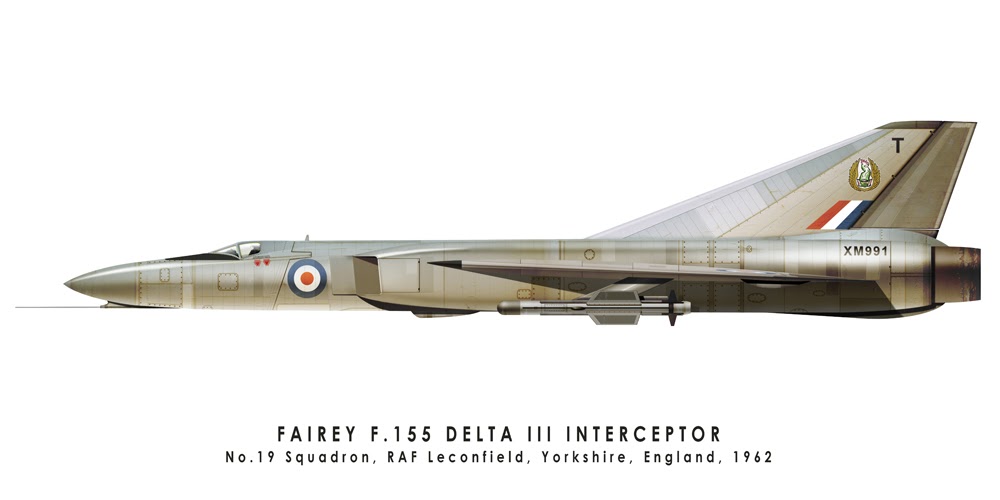 After burner is located far aft from engine.

ER.103B : experimental aircraft development of the Delta 2, applied the wings of the FD2 with a revised longer fuselage, had underwing fuel tanks, engine was Gyron or RB.122.
ER.103C : A combat fighter model, wings scaled up by 50 per cent, Ferranti Airborne Interception Radar 1495 and de Havilland Firestreak air-to-air missiles

And excellent side view here. Side of the airintake need some modification for variable air intake area mechanism?

This page details the development and operational history of the Fairey E.R.103 (F.155T) including technical specifications and pictures.
www.militaryfactory.com

How about my understanding? Source : PROJECT CANCELLED, BSP JET FIGHTERS SINCE 1950, etc... 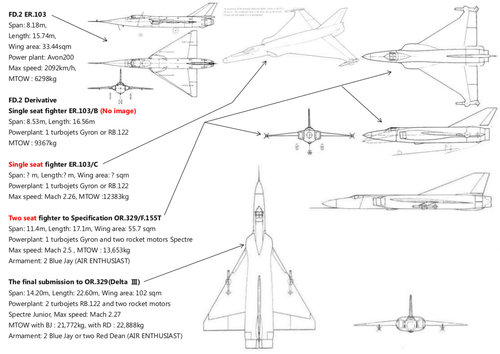 I think those scans are from "Project Cancelled" by Derek Wood. You may find the answer there.

You should also provide information on where you are getting your scans from, in this case, Project Cancelled. It will help others in finding more information and reduce the risk of duplicated work.

lost projects of the golden era of british aircraft

lost projects of the golden era of british aircraft
beyondthesprues.com

Regarding the Genie rocket as the best nuclear anti-bomber weapon the RAF predicted that its purchase would take some time, so they contemplated using the Red Beard nuclear bomb instead.
Here is a drawing showing how the bomb would be used in the anti-bomber rôle (from "Battle Flight" by Chris Gibson).

Nuclear bomber, sure - but ground attack with rockets? Seems a very good way to lose a very expensive plane.
Z

That is one hell of a ventral fuel tank!

I am curious, the drawings only have the bombs/rockets under the port wing, and the loadouts are only listed for an asymmetric load. Presumably this means a ventral tank and one underwing drop tank would always be needed for sufficient range at low level?
A thirsty beast.

Using a Delta III for rocket strafing attacks does seem rather wasteful when a Hunter or Canberra could do the strafing role just as well. Presumably there would have only been a relatively small F.155 force, so unlikely there would be interceptors to spare from the defence of the UK to go mud moving (and if T-55s got ashore in Kent the game would be up anyway).

My post on an air-to-ground role for the OR.329 aircraft from 2013 was the product of research at Kew. There was a specific study to see if the OR.329 aircraft could undertake the strike role with concern expressed that the RAF may have to choose between OR.329 and OR.339. Rather like OR.328 sought to use the already in development Gloster thin-wing Javelin airframe as a cost saving measure in the role of Canberra replacement, this study sought to use the Fairey F.155T. The presence of an enormous amount of external fuel and asymmetric stores carriage being seen on the Gloster proposals too, this may suggest that Fairey were also trying to meet a low-level requirement (this was a major driver of the need for more fuel). The brochure Paul posted probably being the industry response to this RAF interest. The Soviets had bomber and interceptor versions of the Yak-28, and the French of the Sud Aviation Vautour and the Super Vautour and Mirage IV layouts were schemed in both roles too, so the RAF weren't doing anything unusual by considering multipurpose airframes with missions defined by avionics and ordnance configurations.

I wouldn't read too much into the presence of rocket pods, along with free-fall bombs they constituted the two (three if you include cannon) available means of delivering conventional ordnance from an aircraft and if that aircraft was to approach its target at low level for survivability reasons anyway unguided rockets may have been a credible ordnance option.
Last edited: Feb 18, 2021
Share:
Facebook Twitter Reddit Pinterest Tumblr WhatsApp Email Share Link