A few years ago I saw a poster(?) of the West German space shuttle (or lifting body proposal?) ERNO (= Entwicklungsring Nord) LB 21 Bumerang inside the Peenemünde museum. After this 'meeting' I never saw it again, neither in books nor in magazines.

Who can help with details (illustrations included) on this spaceplane design?

Hmm...Boomerang as I have read was one of 2003 EADS-Astrium The European Future Launcher Preparatory
Program (FLPP)

The basic characteristics of the launch system

OK, we've collected all the Boomerangs now) Richard - thank you, it was new for me, too.

Thanks, Richard. That's the vehicle, I'm looking for. The mentioned poster(?) in the exhibition has shown the final stage(?) of the design with a cockpit (different to the test models in your scans).

is hang now in German "Museum Der Technik" in München.

Could this be the Bumerang too? Now I'm not to be sure, if I speak on the same 'thing', when I find this artwork in the file with all the material I've scanned in the EADS Bremen archive a few years ago ... - ???

Michel, I'm always interested in your offer (you can use PM or my e-mail address in case of larger attachments) - thank you in advance.

boxkite said:
Could this be the Bumerang too?
Click to expand...

boxkite said:
Could this be the Bumerang too?
Click to expand...

That is Pre-Final Shuttle with Spacelab ;D

LB 21 Bumerang was a Pure un-manned Lifting Body program of ERNO
More on that much later...

Phase I
To find the best form of the lifting body (LB) in a wind tunnel test of LB 01 to LB 21
Alloy Material test with Inconcel, René 41 or Haynes
Also oxide ceramic was tested as heatshield

with help of the Erprobungsstelle 61 of the Bundeswehr
made drop test with a Transall C-130 aircraft, Bumerang on a sled is roll out back of plane.
After separation of sled, It fly then remote-controlled from the second plane
end of glide fly, its unfolded a parachute and landing in water

First droptest over the North Sea, then fall 1971 south at island of Sardinia
Further droptest made in 1973.

Boomerang and the sleds were recovered from employed local Fisherman.
Under the supervision of staff ERNO

Phase III
Start of unmanned LB 21 with Europe II rocket
An singel orbital flight
With a 600 kiloPond heavy Model (stand so in the magazine!)

Unfortunately LB 21 Bomerang program end after Phase II
Because in 1974 ELDO-ESRO dissolved and ESA was founded.
All EUROPE II flights were canceled and development of the Ariane 1 began ...

Note
ERNO = Entwicklungsring Nord = Northern development circle
was a 1961 joint venture of Bremen-based Weserflug and Focke-Wulf with Hamburger Flugzeugbau.
to develop parts for rockets and get involved in space activities.
later they work with Bolkow on EUROPA 1 & 2 ROCKET, Third Stage ASTRIS.

unfortunate the museum refuse the Use of (in museum) taken Fotos in Internet. And also to sell them.
Dam....

wat got the Peenemünde museum on LB 21 Bomerang ?

Thanks for all the info. I am also very interested in this.

The world is small.
I was at the Deutsche Museum of Munich yesterday and the "Bumerang" is exposed there in the astronautic gallery.
Lenght: 3.1m
Span: 1.9m
Weight: 350kg

This is the best angle of view you could shot it?

flateric said:
This is the best angle of view you could shot it?
Click to expand...

until museum guard ask in Bavaria German
"Wat are you doing there ?"

Indeed, quite difficult to have a good angle. the craft is suspended in a dark angle of the gallery, with little possibility to have a full view.
I took this other shot:

Looks like its rudder and ailerons have been removed?

It does, well spotted!
A

No longer a lifty body, rather something a bit similar to Nord Veras...

Well, that's that one sorted then - thanks a lot!
S

this Space Shuttle Orbiter concept Phase B from 1970
ERNO made Drop test 1969 for NASA under Join venture ELDO/ESRO
Click to expand...

And from Flight International 27 April 1972 we have this, with ailerons and stabilisers intact

...and a nice article on the Bumerang, courtesy of Flight.

I liked this part: At this site, test flights F2, F3, F4 and F5 were carried out using the radio-controlled Bumerang II (watched by
two submarines of unknown nationality). 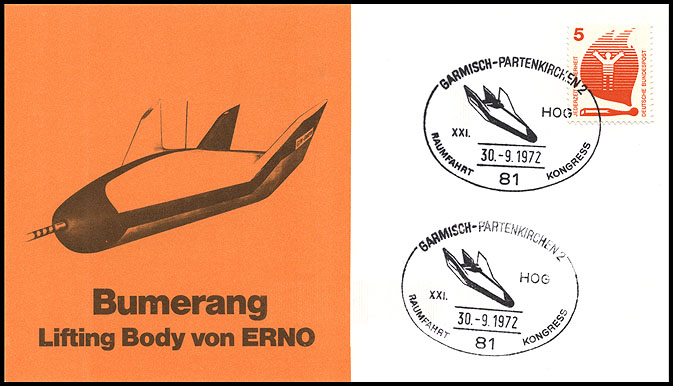 not much time
but in Flight Global is a nice Article

you got a year on this picture ?
I interested if this is a early study LB01 to LB20
B