I know many ducted fan aircraft and projects were designed,the Jethawk II
project and Marvel aircraft.

The Jet Hawk seems like a modernized version of the RicJet 4
from 1977. The propulsion system is known to RC-modellers
as "Impeller", I think .

Here is a rather interesting design for an aerobatic aircraft using a ducted fan.

Much more info can be found here:
http://www.esotec.co.nz/hb/HTML/HomePage2_F.html

RFB Fantrainer.
These photos were taken recently by a friend of mine.
--Luc

Without a doubt one of my favorite trainer designs ever. Thanks for sharing!
K

and of course an Optica.
http://www.airliners.net/search/photo.search?aircraft_genericsearch=Optica

Factory Model of Convair ADD (Advanced Destroyer Drone) VTOL Navy Program, from 1961-63. Perimeter side openings are for depth charges and large center slot is for a pair of torpedoes.

Inasmuch as I knew the Model 49 for AAFSS, I had never heard of the ADD for the Navy. Thanks a lot for sharing!

Great find, hesham, and fascinating design. I have now gathered some info on the 329 project and will create a topic about it soon. Thanks!


"The Funk FK 3 airframe served as the basis for the development of the motorized glider Sirius 1 in 1970, an outstanding aircraft if only on account of its integrated propeller fan. The Sirius concept was developed further by the Rheinflugzeugbau Company and resulted in the lightweight military trainer "Fantrainer". This information and more about Otto Funk aircraft here: http://www.berndroth.com/Fk/html/body_fk_history.html


"VFW-Fokkers' Rhein-Flugzeugbau subsidiary is now flight testing the Sirius II in its investigation of integrated ducted fan propulsion. First flown on 18 January 1972, Sirius II has two 30 hp Fichtel & Sachs Wankel-type engines driving the high-speed propeller that is contained in a duct forming an integral part of fuselage design, and the wing and tail unit of a Caproni Vizzola Calif A 21 sailplane. Use of Wankel type engines makes intermediate gears unnecessary and two-engined reliability is achieved with a single propeller."

Jim Miller's Texas Gem Formula One racer in its original form utilized a ducted prop. It exhibited the usual clearance/efficiency issues and the duct was soon discarded.

Another project , from RHEIN FLUGZEUGBAU :

richard said:
Another project , from RHEIN FLUGZEUGBAU :
Click to expand...

Hi richard,
I have this aircraft listed as a project by the swiss firm A.B.S. Aircraft.
Maveric

richard said:
Another project , from RHEIN FLUGZEUGBAU :
Click to expand... 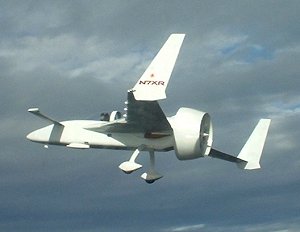 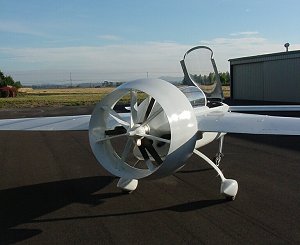 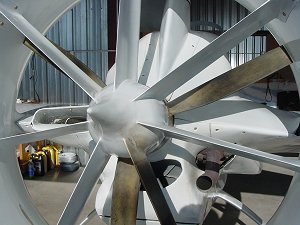 The Duckt homebuilt aircraft project was started by Perry Mick in 1986 as a conventional Rutan Long-EZ. An ad by Moller International in 1994 advertising the SkyCar, which is still under development, inspired the idea to develop a ducted fan for homebuilt aircraft built around the readily available 13B rotary engine. By using a Wankel engine with only three basic moving parts, and utilizing it in a direct-drive configuration with the ducted-fan, the goal was to produce cost-effective, reliable propulsion for homebuilt aircraft.

Research into propeller and ducted fan design was begun in 1994. The basic airframe was completed in 1994. Sanding and finishing consumed more time through 1996. Installation of the rotary engine into the Long-EZ began in January 1997. Other than the engine and ducted-fan installation, the aircraft is basically stock Long-EZ, with a few minor modifications such as split forward-hinging canopies and landing lights in the strakes. However, Perry Mick decided to call the airplane "Duckt". The registration number "N7XR" ("RX7" in reverse) was obtained from the FAA.

It was believed that the venturi-shape of Duct2 was possibly a mistake, that perhaps this shape was limiting the top-end speed of the aircraft. A new duct was designed with a venturi of 10% (air velocity in the fan plane is 10% higher than aircraft velocity), a significant reduction from Duct2 that has 30%. Duct3 was built in the Spring of 2000 and installed to the existing mounting points on the engine, and initial tests performed. The takeoff distance was increased, climb rate decreased, maximum speed about the same with Duct3. Duct3 loaded the engine more, such that the reduction in RPM offset the speed increase. Duct3 will probably be a desirable duct to use when more power is available, such as when a turbocharger is installed.

Stators were installed in June 2000. It was believed the stators would have little effect, but surprisingly, they improved climb rate by up to 50%. No effect noticed on takeoff distance or maximum speed. The current operational configuration is Duct2 with stator blades and Fan3. Mods performed in early 2003 were engine improvements. A new custom intake manifold was built from composites and relocated to the right wing-root area. This got the bulky and heavy stock manifold off the top of the engine. The big bumps were removed from the cowl, allowing more airflow into the fan and a more streamlined profile with less drag. Top speed increased 5 knots.

When it seemed like the Duckt had finally reached its ideal configuration, Perry Mick announced in February 2005 that Duckt was now ductless! It was converted from ducted fan propulsion to PSRU/prop December 2004 (still powered by a rotary engine). Mick explained that takeoff distance remained the same, climb rate was improved and cruise speed was much improved. "Ducted fans remain a viable alternative, especially for slower applications such as Light Sport Aircraft and gyrocopters. The Long-EZ, other than being a pusher, was probably not the ideal testbed to develop the ducted fan, but I did get almost 500 enjoyable flight hours in over 5 years from the configuration," said Mick.


Specifications, performance figures and more photos on my website:

here is a ducted-fan airplane from Russian,GA Aircraft,who know more about it ?;

The link for more

In a lot of RC aircraft an electric or gas ducted fan is used as a source of propulsion. Hypothetically could a small aircraft piston motor be used to create a life sized ducted fan style system for a small aircraft? Or would that engine not be capable of high enough rpm/torque levels to create...
www.homebuiltairplanes.com

In a lot of RC aircraft an electric or gas ducted fan is used as a source of propulsion. Hypothetically could a small aircraft piston motor be used to create a life sized ducted fan style system for a small aircraft? Or would that engine not be capable of high enough rpm/torque levels to create...
www.homebuiltairplanes.com

anyone got information about the DFT-1 by Claus Herbert? country of origin?

kenfalzon said:
anyone got information about the DFT-1 by Claus Herbert? country of origin?
Click to expand...

do you have a picture or drawing for it,I think it was from Germany ?.
K

must be German, but i cannot find anything about this aircraft

it's from my posts,oh my memory,I search in more than 15 JAWA issues,but
I couldn't find it also ?.

Here are images of a ducted fan aircraft proposal model recently sold on ebay. It was described only as a "'70s airforce trainer". I recall similar designs being proposed in the '80s by a German firm in response to T-37 replacement competitions - I don't think there was much talk of replacing the T-37 in the '70s. Any other details?

I won the bid for the Vought Eaglet posted above and the paint and finish was terrible..... soooooooooo as you can see in the picture of the case I repainted the model as the attack version. Enjoy.

Actually the case is in the VOUGHT archives and sadly not in the Vought house......

here is some ducted fan aircraft;

Rohr’s 2-175 was the prettiest little fan-driven delta. It spun experimental Lycoming engines at twice the usual rpm. Test pilot Don Westergren liked the single flying prototype but it was cancelled when the bigger Rohr Corporation encountered cash-flow problems.
Rohr is a California-based company hat specializes in building engine nacelles for jet airliners.
Westergren and project engineer Richard Fraser wrote a book about the Rohr 2-175. The book contained many Rohr Corp. drawings and photos, but sadly the book is out of print.
We have discussed the Rohr 2-175 over on www.homebuiltairplanes.com primarily on the “delta “ thread.
Last edited: Dec 13, 2019