Stumbled across this pic on "Life" site. Looks to me like DC-4e Prototype. Do you agree?

Definitely so. Wasn't there a caption accompanying the photo so as to confirm it?
V

Well, the vertical fins have the wrong shape for it to be any of the Constellation variants, so I'd reckon that DC-4E is the most logical subject.

Another shot from LIFE giving a better view.

Would it be fair to say that the DC-4E was an entirely different aircraft from the production DC-4 that followed?
F

CFE said:
Would it be fair to say that the DC-4E was an entirely different aircraft from the production DC-4 that followed?
Click to expand...

Bailey said:
Another shot from LIFE giving a better view.

No problem......search was United Airlines.

This is the one I posted.

This is the one Verner posted.

Intriguingly the second one is back to front...look at the letters over the doorway.

The parallel stories of the Douglas DC-4E and its wind tunnel model are both of interest.

Designed between 1935 and 1937 to United Air Lines specifications, the Douglas DC-4E (‘E’ for experimental) was first flown on 7 June 1938, more than six months before the Boeing 307. As such, it was the world’s first pressurized airliner, much larger and more luxurious than its successor, the DC-4/C-54. It also had a completely different airframe than the DC-4, and preceded it by nearly four years. Ultimately deemed too expensive and too complex to operate profitably, with its cabin air conditioning, full pressurization and hydraulic controls, the entire program was canceled after only 500 hours of flight.

The one and only DC-4E was purchased on 29 September 1939 by Dai Nippon Koku KK (which later became Japan Air Lines) allegedly as their flagship VIP transport. In reality, the DC-4E was disassembled, reverse-engineered and used as the development template for heavy, four-engine bombers. As an example, the entire wing assembly of Nakajima’s G5N1 ‘Shinzan’ is an exact copy of the DC-4E’s wing assembly. Japan had not built any heavy, four-engine aircraft prior to this and, by some estimates, the DC-4E gave them a two-year head start. It also gave Japan the potential capability of bombing the U.S.

The DC-4E made its trip to Japan by boat, accompanied by a team of Douglas technicians and all engineering data files. Also on board was the sole DC-4E wind tunnel model, which showed evidence of the airplane’s development. For example, when United Air Lines President William Patterson requested an increase in capacity from 46 to 52 passengers, back in 1937, a fuselage plug was added ahead of the wing box. That fuselage plug still exists on the wind tunnel model today.

Rather than custom-build a DC-4E display model, Dai Nippon Koku simply painted up the wind tunnel model in their commercial livery scheme – emerald green with a silver cheat line – and suspended it at their Tokyo headquarters, to further the deception. In the spring of 1940, a news bulletin describing the crash of the DC-4E in the Bay of Tokyo was circulated, as a means of explaining the disappearance of Nippon’s flagship airliner.

The wind tunnel model somehow managed to survive the intense fire bombing of Tokyo and resurfaced fourteen years later, when it was recognized at the back of a Japan Air Lines hangar by a Douglas technician, who was training Japanese DC-7 mechanics. This information was passed along to Donald W. Douglas, who arranged to have the model returned to Santa Monica for the Douglas museum, then in the planning stages. The Dai Nippon Koku paint was removed for the most part, though some work still needs to be done in that area, to restore the model back to its original condition. Interestingly, the side instrumentation access panel was taken off during the paint removal process. Its 1939 emerald green paint, silver cheat line and one metallic blue window are still present.

Does anyone have any decent drawings of this beasty perhaps? TIA

Decent or not ,I don't know ; From "Handbuch der Luftfahrt " 1939 (the german equivalent of the Jane's)

The official Douglas drawings of the Super Mainliner, DC-4E:

And a link to a superb scratchbuilt model:

Lots of pictures and information on this blog:

Thanks for the drawing Richard- better than I've got.
Thanks for the links Stargazer, very nice. That modelling fellow is quite industrious eh?

Dear Boys & Girls, I would very pleased if one of you could direct me to an accurate general arrangement drawing of the DC-4E; accurate enough for modelmaking purposes please......

Thank you Stargazer, I have that drawing already and sad to say it's not very good and not very useful for modelmaking purposes. Much appreciated anyway

Some better plans to work from:

Hi!
DC-4E in Haneda airport Tokyo at the day.
And
http://www.igosso.net/se.cgi?mode=tags&q=dc4e

Is the name Sky Sovereign a speculative name given to the Douglas DC-4E by The Sky Sovereign DC-4E website, a play on the names Skytrain and Skymaster?
(http://sky-sovereign-dc-4e.blogspot.com/)

Or was the DC-4E going to be named Sky Sovereign by Douglas or for a military variant of the DC-4E?

The Douglas DC-4E was an experimental airliner that was developed before World War II. The design originated in 1935 from a requirement by United Air Lines. The goal was to develop a much larger and more sophisticated replacement for the DC-3, before the first DC-3 had even flown. There was enough interest from other airlines, that American Airlines, Eastern Air Lines, Pan American Airways, and TWA joined United in providing $100,000 each toward the cost of developing the new aircraft.

With a planned capacity of 42 passengers, the DC-4 (as it was then known) would seat twice as many people as the DC-3. It would be the first large airplane with a nose wheel. Other innovations included auxiliary power units, power-boosted flight controls, alternating current electrical system, and air conditioning. Cabin pressurization was also planned for the production aircraft. The aircraft also featured a novel tail with three vertical stabilizers. This provided sufficient vertical stabilizer area to allow the aircraft to take-off with only two engines on one side operating while still allowing the plane to fit into existing hangars.

The prototype first flew on June 7, 1938 from Clover Field in Santa Monica, California. It was used by United Air Lines for in-service evaluation during 1939. Operating the aircraft was remarkably trouble-free. However, the complex systems proved to be expensive to maintain and the design was abandoned in favor of a less complex four-engined design. This newer design was designated DC-4, leading to the earlier design to be re-designated DC-4E (E for "experimental"). The DC-4E was sold to Japan, which was buying western aircraft for evaluation and technology transfer during this period. The design became the basis of the Nakajima G5N bomber.

Thanks for the link to this video ! Was a little bit difficult, because I got the notice "Not available in your
country, because of publishing rights not conceded by the GEMA" , but with some fiddling I got it.

For the name "Sky Sovereign" the mentioned site seems to be the only reference.
A

I'm not overly qualified to respond or ad in to much to this fine forum but I do have a very nice photo of this plane. This was taken by Margaret Bourke-White at the LaGuardia Airport in 1939. My wife's uncle, Bill Maxwell was the manager of United Air Lines there at the time and assisted her in taking the photos and she gave this signed copy to him in gratitude. I think this was part of the original series for Life magazine.
It's a superb photo of a very interesting and rare plane, I'm honored to own it.

Thanks to you both for your great contributions. The photo is very nice indeed and unique... Wish you could post a higher res version of it!
S

Certainly a treasure: the original company brochure for the DC-4E (please note that it was just plain "DC-4" at the time).

Thanks for posting that Stephane. Once could probably incite a riot by distributing that one pic of the sleeper berth setup to the poor slobs packed into coach on, say, a typical Delta JFK-LAX run.

I wonder when it was that designers of these large aircraft decided that canting the engines slightly outward was no longer needed or desired.


from Les Ailes journal,the Douglas DC-4,I can't remember the page or the issue.

I found some documentation in the Robert Patterson Files at the Library of Congress Manuscript division detailing 1941 aircraft production and there's some mention of a "DC-4 Bomber". Does anyone know about this?
A

See my response (and a request) in the XB-31 thread.

RyanC said:
I found some documentation in the Robert Patterson Files at the Library of Congress Manuscript division detailing 1941 aircraft production and there's some mention of a "DC-4 Bomber". Does anyone know about this?
Click to expand...

we love anything new,please send it and thanks.

RyanC said:
I found some documentation in the Robert Patterson Files at the Library of Congress Manuscript division detailing 1941 aircraft production and there's some mention of a "DC-4 Bomber". Does anyone know about this?
Click to expand...

we love anything new,please send it and thanks.
Click to expand...

Also in Flight June 22nd 1939.
Were the engines really mounted with that large angle of toe-out? Personally I doubt it. (although one drawings says 2.5 degrees on the inner engines and 3 degrees on the outer)

To answer my own question the engines were angled outwards. A similar arrangement is shown in their 1935 patent US97713

Some nice British Pathé DC-4E newsreel footage posted on YouTube. It also features a cameo (at the 29 second mark) of aviator, aircraft designer, and test pilot Benny Howard and his wife Maxine "Mike" Howard aboard. In addition to designing (and flying) his DGA ("Damn Good Airplane") series of aircraft, Benny Howard was also a test pilot on the DC-4E project. Mike Howard was also an accomplished aviatrix in her own right.
YouTube - British Pathe - "New American Plane Lner (1938)"

Here's Universal Newsreel footage of the Douglas DC-4E, posted by CriticalPast on YouTube. Included is a pretty good amount of interior footage, giving the viewer a good idea of the large cross-section of the cabin (albeit filled with test equipment and engineers/observers).

Another find in the Aric Aldrich Collection.

There is no information on the back of this photo, so I do not know where or when this picture was taken. 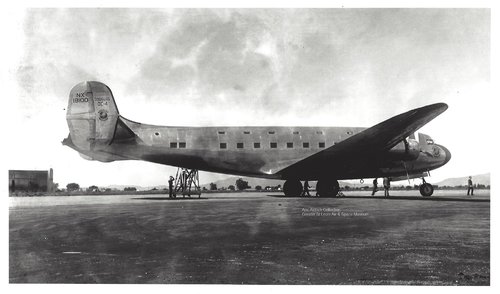