From the page 80 of the book: Cockatoo Island: Sydney's Historic Dockyard:
http://books.google.hu/books?id=1ulc79wlY54C&printsec=frontcover&hl=hu#v=onepage&q=cruiser&f=false 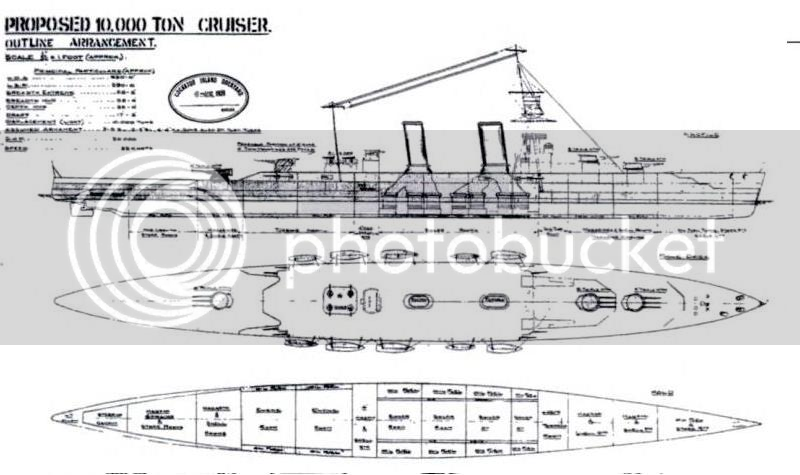 These cruisers are designed by Cockatoo Island naval Dockyards in 1924 and Vickers in 1929.
They resemble a significantly modified Hawkins class cruiser, with a similar hull shape and armour layout. Difference that this design have 2 more boilers but their layout as well the stac's and bridge shape are basically the same as the Hawkinses. This is due that the Australian are known data about these cruiser but not about the new Counties.

Armaments:
9x 8inch guns in 3 triple turrets
12x 5inch guns in casemates 6 per beam in a casemate deck from abreast the bridge to just forward of C turret, in a 4-cornered arrangement s 4-4 can fire forward and aft with a single on each beam abreast the forward stack, and a single on each beam abreast the mainmast.
4x 4inch AA guns on a raised platform with the mainmast in the middle of it.
4x 21inch Torpedo Tubes all submerged under the bridge, 2 port 2 starboard.

As the image shows there is also an alternative position for the C turret shown. This could be a better placement for a future seaplane space or a possible place for a 4th turret if twin guns to be fitted.

Other Information:
The CA design was done quickly, as a sketch design by Cockatoo and Walsh Island designers to start work on cost estimates for the construction of such ships in Australia. At this point in time the Counties were still in early design stage, and therefore had little or no data on them. Apparently they did have full drawings for the Hawkins class - the nearest thing to a modern 10,000 ton CA that they had available. So they used an expanded version of the design, with data from Vickers on the planned triple 8" turret.

As a note it was a possible modernizations of the hawkins class with 3 twin 8inch gun turrets!

Another variant states from 1925 is that the same hull of the HMS Kent, Displacement of Light load draft under Washington Standard: 10000 tons. Engien with 80,000shp power, no data for speed but changed armament of 4x2 8inch, 4x1 4inch AA guns, 2 Pom Poms, 4 3 pounder saluting guns and two quadruple above water torpedo launchers.

Two ships to be built to replace the decommissioned and scuttled battlecruiser HMAS Australia as part of the "Empire protection plan".
Basically, to protect trade near & with Australia, and to provide their contribution to defense of the Commonwealth/Empire as a whole.

In the end, it was the expense of building these ships in Australia to a unique design that cancelled them in favor of buying two Kent class 8" cruisers "off-the-shelf" from UK shipyards in 1925.


1929 Vickers design by George Thurston, version Type A (type B have 4 twin turrets and Type C have 3 triple all forward!) 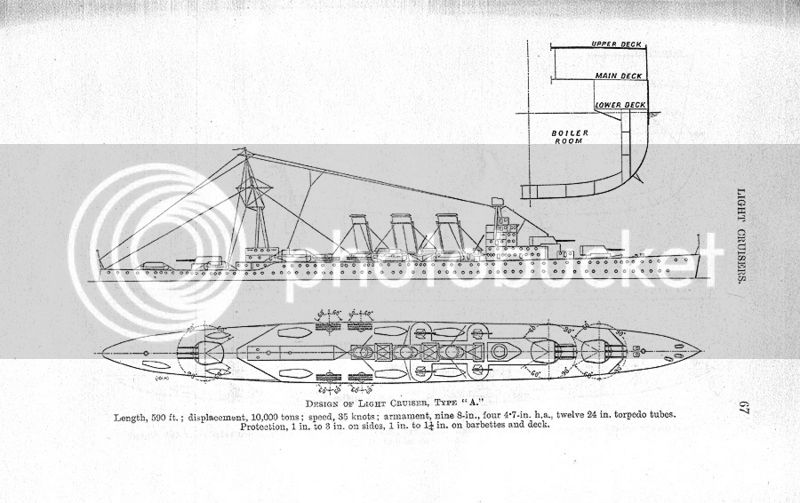 That's much appreciated info for me. Many thanks!

Thanks Tzoli ! Interesting design, that for me brings up the question, if it would have been possible
to modify the Hawkins class with twin, if not triple 8 inch turrets. Apart from the increased firepower, I
would regard the use of the common 8 inch ammo as a benefit against the 7.5 inch, which after WW I
became quite a rare type in the Royal Navy, I think.

Tzoli said:
In the end, it was the expense of building these ships in Australia to a unique design that cancelled them in favor of buying two Kent class 8" cruisers "off-the-shelf" from UK shipyards in 1925.
Click to expand...


That is true though Cockatoo dockyard was funded to build the 4-5,000 tonne seaplane carrier HMAS Albatross to provide some Australian work as an internalised ‘offset’ to the Country class cruiser buy. Of course while the British built ships may have cost less in outlay building the two heavy cruisers in Australia would have seen a fair slice of their larger outlay returned to the Government via various revenues and tariffs and much of the rest of the money grow domestic industry, not to mention save on the costs of building an effectively unwanted (and never used) ship: HMAS Albatross. Unfortunately the same mistake keeps getting made, over and over again…
S

A few points on this thread:
1. The 'X' turret position on the Cockatoo I. cruiser was a position for X twin turret in a possible 4 twin turret version. In fact the final contract proposal was for a Hawkins-like hull but Kent size and armament. (I have copies of the plans and contract documentation)
2. The Counties were ordered from UK because considerably cheaper, but also because of much earlier delivery. Getting Cockatoo Island to a state in which it could build large cruisers was not quick, with heavy reliance on Vickers for guns, turrets and armour. (Vickers also offered Australia a design 835X with 3x2 8in in 1923, based on Hawkins; and another 1074X with 3x3 8in or 1074C with 4x2 8in in 1923/24. Vickers also offered design 1144 a repeat Kent, but the contracts went to John Brown.
3. There were proposals in 1925 to give the RN Hawkins class twin 8in. Only 3 turrets were possible, as the hull aft was not deep enough for the fourth, and raising the turrets on an elevated barbette would put the displacement up to about 10600 tons, over the Washington Treaty limit. There was also political disquiet about the RN acquiring four more 8in cruisers so quickly after the disarmament treaty. [ADM1/8674/8]
4. Thurston's cruiser designs were first published in Brassey's Naval Annual in 1923, with more discussion in BNA 1925. 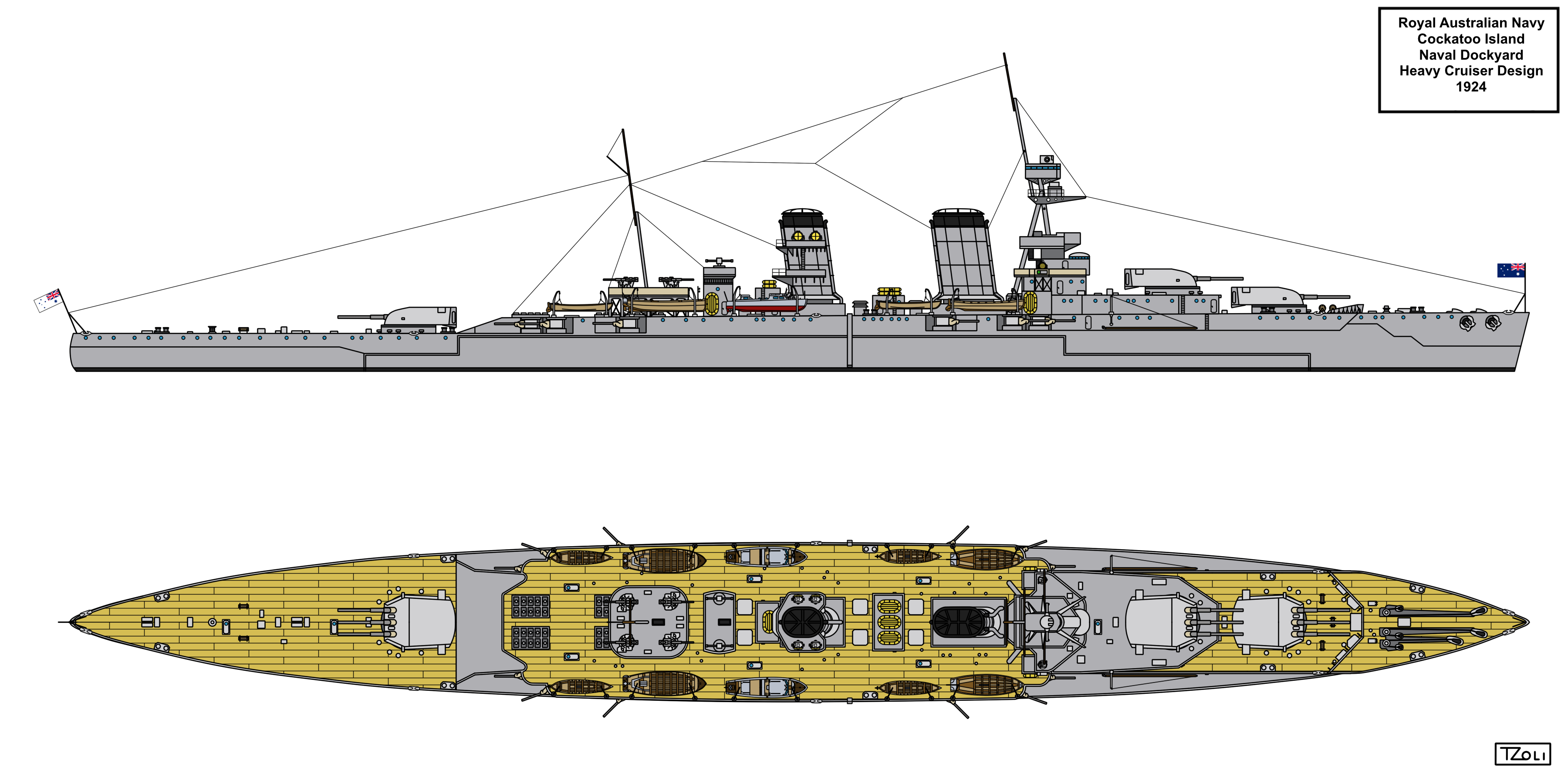 Thanks Tzoli also for shared history about this study for two australian cruiser .
M

yes, seen the line drawings but I recall one RN constructor noting that the RN disfavoured having torpedo tubes located high and when placing same on cruisers indeed had problems with placing them one deck lower as to seaworthiness, and definitely submerged tubes was not well considered after Great War experience.
V

As always great work Tzoli!
This project has been of great interest to me since I first heard of it years ago and I agree with Abraham that an Australian build of the two cruisers was very much a missed opportunity that would have been cheaper than buying two ships and building a seaplane carrier.

It is my understanding that the Town HMAS Adelaide, the last cruiser built in Australia, was at one point seriously considered to be ordered as a highly modified design based on the "Atlantic Cruiser" sketches, or even as a Hawkins Class. This makes sense as the Hawkins design was evolved from the Towns through the Atlantic Cruiser trade protection concepts. Ironically the reason Adelaide was built as a slightly modified Town was the concern that changing the design too much would significantly delay her completion date, considering the loss of critical components, including some machinery components, in transit from the UK delayed her completion until well after WWI, ordering an evolved design would not have made any difference to completion times. One of the reasons given for decision to order the two new cruisers from the UK was the excessive build time of HMAS Adelaide being seen locally as a failure of Australian shipbuilding.

Hindsight is a wonderful thing but there were those who pushed for Adelaide to be a larger more capable design, and pushed for the two new cruisers to be built locally. History suggests that Australia would have been far better served doing that exactly that and then following on by building the replacements for the first three Towns (Sydney, Brisbane and Melbourne) locally as well. Cost is not an issue as more money was wasted building Albatross than the local overheads would have cost, while the need for early delivery was not as urgent as suggested either as Australia was under no obligation to dispose of the battlecruiser Australia at all, let alone by a specific date, and the budget was so tight that many ships the navy had were laid up anyway. What happened was actually wasteful political and economic incompetence.

The ideal timeline would have been Adelaide ordered and completed as a Hawkins, which would have served as an evolutionary prototype for the first two post war cruisers. These ships, evolved from the already completed Adelaide, should have been completed sequentially without too much difficulty by the end of the 1920s perhaps early 30s and followed by three modified versions, perhaps with four triple 6" instead of buying the Modified Leanders. Leading into WWII Cockatoo would have been able to continue building cruisers and possibly even light carriers.

Yes the HMAS Adelaide had two projects for conversion into a sort of heavy cruiser: 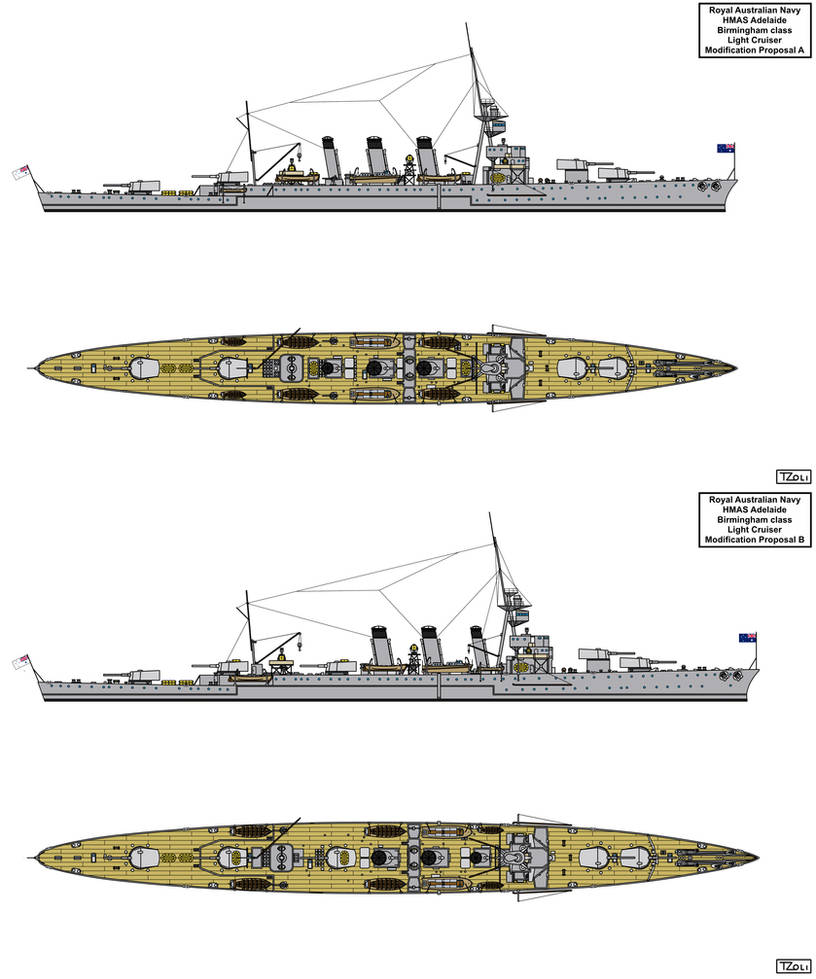 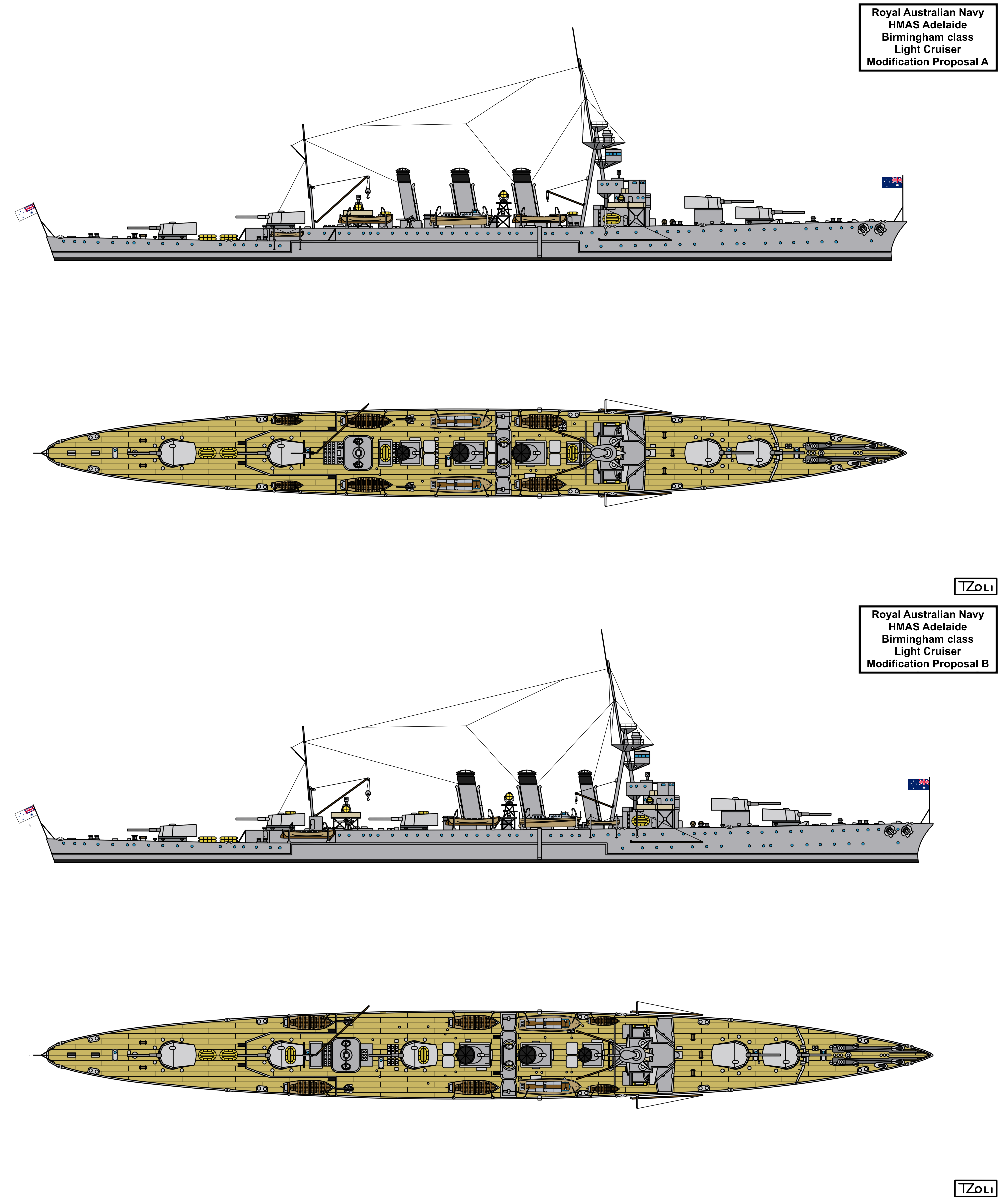 
Compare it to Adelaide as finished in 1922: