Anyone know what the item is on the small grey trolley?!

Barrington Bond said:
Anyone know what the item is on the small grey trolley?!

Well, the end nearest the camera has handles machined into the skirt - much like a gas cylinder. Might be part of a rocket pressurisation system.

As it appears to be posed amongst various German WWII missiles, and it does look faintly familar, I suspect it is part of the V-1 launching system. It might be part of the Hydrogen-Peroxide steam launcher?

Hello all, my first post here.
The small object is a mid fuselage section of the Rheintochter R III F antiaircraft rocket - basically a tubular tank section with wing sockets, then a spherical compressed air tank for pressurizing the propellants tanks and the combustion chamber. It's - most probably - the Konrad engine.
A seedy (with misplaced canards) and simplified representation of the real thing can be seen here:
http://www.net.bialystok.pl/~hess/r_ppk_rheinmetall_borsig_rheintochter_r3.htm

Ah! So it goes into the one standing next to it then?!

This missile is an antiaircraft rocket developed by Rheinmetall-Borsig, one of three similar developments sponsored by Halder of GL Flak E5, the others being Wasserfall and Enzian.

The first experiments with steering were made in February, 1944. According to one report Rheintochter was abandoned in favor of Hs-117 after a demonstration to Goering and Speer at Karlshagen in October, 1944. On 6 February 1945, SS leader Kammler stated that Rheintochter was to be closed out at once.

Rheintochter I photos from Guidance and Homing of Missiles and Pilotless Aircraft, May 1946: 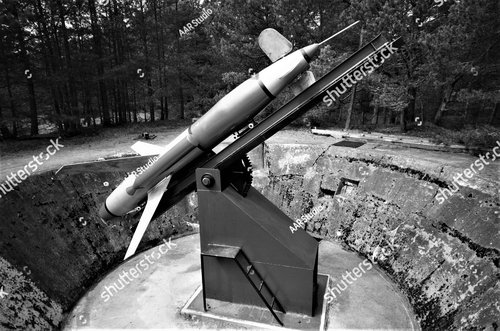 A mock-up in Leba... The concrete foundation is original, though.

Back after a long break.

I love these piston-era and early-jet-era missiles. They don't age well, but they're almost instantly date-able by the wing, fin and body planforms as first-gen and you have to feel for the designers operating at or beyond the ragged edge of then-current knowledge.

Rakete Rheintochter
The R-3 version of the missile was designed to achieve the 10-12 km altitude requirement. Work had begun in May 1944, and six launches of the prototype were made in January 1945. There were two variants: the R-3F version with a Konrad engine (Nitric acid/Tonka-250 or Nitric acid/Visol) in the cruise stage; and the R-3R with a solid propellant cruise engine. In both versions parallel booster motors were used in place of the in-line first stage of the R-1. The R-3 had a length of 4.75 m, and an 1170 kg launch mass. The boost motors provided 1400 kgf for 0.9 seconds. Altitude was to be 12 km at a range of 20 to 25 km. However the missile never reached the stage of state trials testing. Peenemuende was abandoned on 20 February 1945, by which time only 15 R-3's had been completed. The solid rocket motor for the R-3R had reached the stage of stand tests on 6 February 1945, but further work was cancelled. 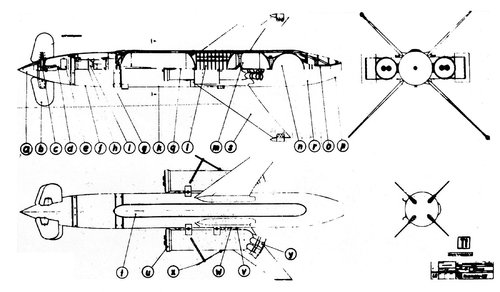 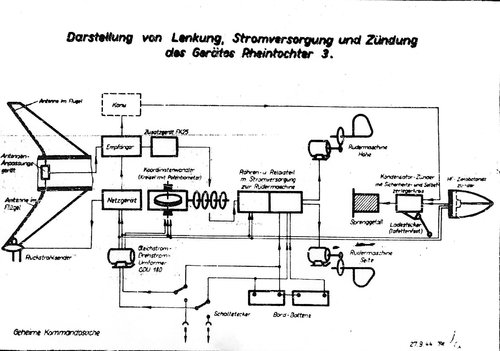 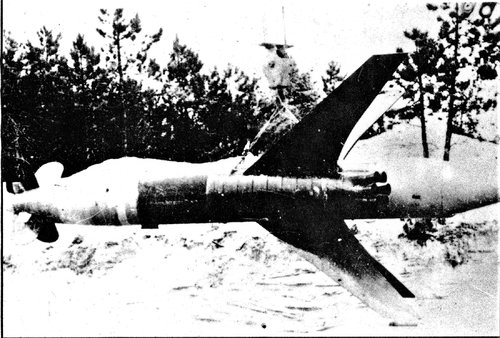 The accelerator consisted of a steel case with a diameter of 320 mm and a 7 mm wall. At the ends, it was closed with removable covers - flat - in front and spherical - in the back. The starting accelerator weighing 390 kg contained 170 kg of diglycol gunpowder. Within 0.9 s, he developed a thrust of the order of 143 kN (1450 kgf). Each accelerator had seven nozzles inclined to the longitudinal axis, the thrust vector of which passed through the center of gravity of the rocket. This simplified rocket balancing with different thrust accelerators. Reliable and synchronous separation of accelerators was carried out by pyro-bolts and aerodynamic brakes in the form of duralumin plates.
The missile head was borrowed from the R-1 variant and significantly upgraded. It housed a rechargeable battery, a three-phase converter that fed all the equipment, a radio control system, a non-contact Canoe fuse, a gyroscope and electric steering machines. The rudders deviated by angles of ± 10 ° at a speed of 30 °.
The launch weight of the rocket is 1830 kg, of which the second stage is 1050 kg. At the end of the active section, the missile launcher accelerated to 450 - 470 m / s, climbed more than 10,000 m and had an inclined range of 20 ... 25 km. At the beginning of 1945, an order was received: by February 20, 1945, to deliver 15 R-3F missiles to Peenemuende. But they did not manage to work out the rocket.
In parallel with work on R-3F, its solid-fuel version of R-3F was developed.
For this sample, the instrument compartment, wings, and starting boosters remained the same as those of the R-3F. To achieve a predetermined firing height of 12 km, the charge mass was required to be increased to 450 kg and the engine operating time to 40 s. To achieve these parameters, the checker must have a large arch thickness and an outer diameter of 500 mm. The press technology for producing powder bombs that was used at that time could not solve this problem. We worked out two ways to get out of this situation.
In the first case, a transition to non-volatile solvents such as trotyl was possible. At the same time, the checker was made by casting, which removed the restriction on its diameter and length.
In the second case, a checker of six to eight powder modules was used. This was a pioneering invention, which subsequently found wide application in the creation of large solid propellant solid propellant solid propellants.
The engine thrust was about 21 kN (2060 kgf) for 40 s. This allowed the 2nd stage weighing 1120 kg to maintain a high subsonic flight speed. The warhead remained unchanged and was located in the tail.Rheintochter RIII’s liquid-fuel rocket engine on display at RAF Cosford. ( 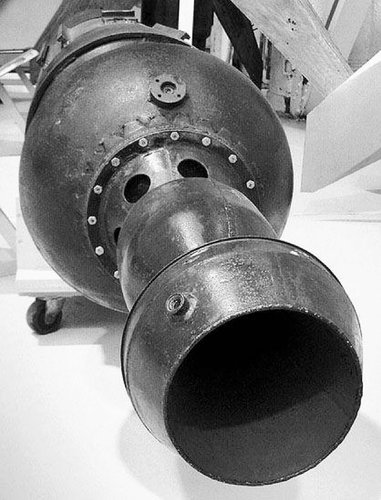 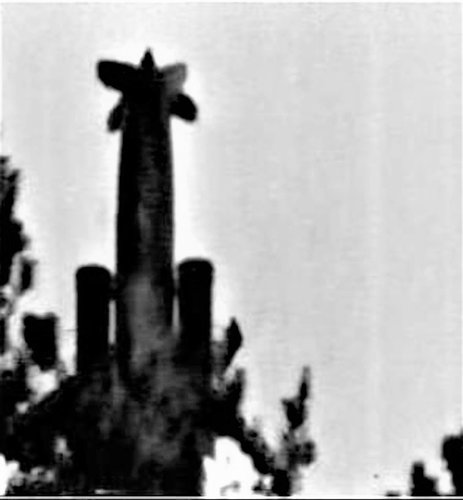 Something is wrong with the data. Burning 170 kg of diglicol fuel in 0.9 s should produce medium thrust around 335 kN.
Click to expand...

Could be the difference between ideal results with an ideal nozzle and combustion chamber vs. the results they actually got at the time?

No, it could not. German solid fuelled rocket engines generally had actual specific impulse in the order of 170-200 kG s/kg (the latter value can be considered a little bit idealistic already ). Specific impulse for the R3 booster data given above is just 77 kG s/kg, what is a ridiculously low value.
Last edited: Aug 18, 2019
Share:
Facebook Twitter Reddit Pinterest Tumblr WhatsApp Email Share Link