unfortunately I lost a book about the Junkers Ju -88,it had a drawing
to EF.059 attack aircraft project,has anyone a drawing to it ?.
T

Maybe this a foolish question , but could it be that the designation EF 59
was used twice. Once in relation to the Ju-88 and once to the Ju-287..?

In the Junkers book mentioned by Jemiba ,the designation EF 59 is reported in the Ju-88 chapter..
T

There were more than one series of JFM project designations. The most well known being the EF series which was a continuation of the original "J" series (changed from J to EF about the time the nazis took over JFM by extortion, intimidation, etc.). The Ju 88 in most literature is described as being the 8-Nummer designation for EF 59 (Although I have never seen a primary document that confirms this information, the timing is about right.). The Ju 85 was more than a twin tail version of the Ju 88, and I have seen primary documents to support that. The photo shown of a jet designated EF59 does not agree with any documented sources I have seen, and IMHO it is incorrect.

Thank you my dears at first,

but the EF.059 was twin piston engined attack aircraft,as in the book,
unfortunately it was old book,and I don't remember the name of the
Author,but I remember also a wooden model to EF.061 aircraft.
And may be I don't remember well and it was J59 ?!.
T

hello
Ask " luftArchiv.de" and click on "site information from alexa" and on "luftarchiv" on the center.
on the left above "die luftwaffe write "junkers ju 88" and click.you have a list of airplanes
the first is "ju 88" click. You have a lot of photos and a text. on the third line on the right
see"EF 59" (i don't understand german) but it is sure this "ef 59" exist but what it is ??
the designation seem to be used twice

Lark is right, in the mentioned book by Wolfgang Wagner, the EF 59 IS mentioned,
as the Ju 88 forerunner, but on page 537, a windtunnel model is shown, which, as the
caption says, can be reagarded as the project, that evolved later into the Ju 88.
Unfortunately, this project is designated as EF 73, so not even in chronological order
with EF 59 ... ???
And, to make matters worse, on the pages 534 and 535 a number of windtunnel models
with different configurations for a jet bomber are carrying the designations EF 55 to
EF 59, the last quite obvious just one step from the final Ju 287 configuration.
Maybe, designations were used twice (then there were around 8 years between the "first"
and the "second" EF 059), or maybe differences were made between windtunnel testing of
configurations and actual projects. And the heading on page 534 speaks of the "Neue EF-
Entwicklungsreihe" (new line of designs) ... ???

the Junkers Ju 85 is quite an elusive aircraft. From it I know a 3-view sketch published by Nowarra, sporting a cabin much like the Do217 and triangular twin fins. In the same book a wind tunnel model shows it with round twin fins, a cabin "a la Ju88 V1" and a massive ventral gondola/turret(?). Wofgang Wagner questions it`s existence as a twin-finned Ju88 by saying this designation might relate to a torpedo bomber with floats submited to a swedish contract, the K85. Well, the fact is it existed a Ju85, as evidenced in Manfred Griehls "The Luftwaffe Album". It shows a mock-up of the Ju85, with an unquestionable plaque, fielding a wide cabin and a protruding machine gun in the half-transparent nose. What would be this aircraft?
A

"but in the Wikipedia,they spoke about the EF-74 as
also a design study for the Ju-288;
http://en.wikipedia.org/wiki/Junkers_Ju_288
who we can believed ?."

If no primary sources are identified, proceed with caution, as a high percentage of undocumented material concerning the Luftwaffe is pure crap (wikipedia, at times, can be in that category) . I generally believe only pictures and primary sources, but even these can have errors (the Germans were pretty good at retouching photos), so better is to find two or three primary sources that say the same thing.

the photo pictured in "The Luftwaffe Album" is pretty much authentic. Nowarra tells the Ju85 shared 90% components with the Ju88. The Ju85A would be the modified Ju88V-3 with a wider cabin to acommodate a rear MG15 gun position ( this cabin is similar in structure to the one in the DH Mosquito ). Nothing on the belly turret/gondola depicted in the wind tunnel model. The Ju85B would be the one with the "kampfkopf" like the Do217K/Do317, with single strut legs. What does your sources say about this plane?

Can somebody post a pic of that Ju-85 please?

also I am not sure about this info,the Junkers EF-134
was jet transport aircraft,is that right ?.
T

As you can see, despite the controversy around its designation, the plaque on the mockup says much of it. Unfortunatelly the picture does not include the gondola (bodenwanne?) as it is stated.
L

There's a kind of a gondola on the first windtunnel model
with the solid nose.

Heinz J.Nowarra mentoned the the solid nose version
as the Ju 85A and the all glazed nose variant as the Ju 85B.

pometablava said:
Can somebody post a pic of that Ju-85 please?

I have attempted to translate the text on the Ju85 posted by Justo using Babelfish and then editing it to try and make sense of the resultant mish mash of words in a language not entirely unlike English.

In 1936 Junkers was pursuing the development of the Ju 88 unarmed high-speed bomber. In 1937 requirements changed and a rearward defensive armament was stipulated. Since however the design of the Ju 88 was equipped with a central vertical stabilizer, which did not offer a sufficient free field of fire to the rear, a new draft design with a double vertical stabilizer called the Ju 85 was prepared. This retained 90 per cent commonality of components with the Ju 88.

When compared to the Ju 88 V-3 the Ju 85 A was very similar but had a single 7.9 mm MG 15 and the double vertical stabilizer. It progressed only so far as the building of mockups, since the defensive armament was felt to be too weak

The design went through a further transformation, the entire fuselage front section was altered to incorporate a glassed hemispherical cockpit/crew compartment with an excellent all round view similar to that of the later Ju 188. This accommodated an armament of 4 x 7.9 mm MG 15 and permitted an increase in the crew from three to four men. The installation incorporated many of the modifications found on the Ju 88 V-6. However, this version proceeded only up to the building of mockups in 1939, preference being given to the central tail unit design of the Ju 88 because of its smaller air resistance.

Can anyone recommend a good reference book on the Ju 288? I have the following: 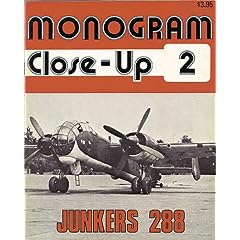 But it is a little light on and would really appreciate more details. I would also like a good 3-view drawing if anyone has one. Given the size of the Bomber B program, I find it hard to believe there is not more information on this aircraft.

Thank you in advance.

I just saw this, obviously, but there was an old issue of Wings/Airpower that had a good article on the Ju-288. I would give you the issue number but my issue somehow walked away from my collection.
I think that issue was published in the 80's.
J

Here is photos that I found on a Greman site is lost to me now that that hard drive is gone.


also from a Russian book about Junkers Ju-88,they mention the EF.059 project,and I think
this early drawing for Ju-88 was also meaning EF.059 ?.

hesham said:
also from a Russian book about Junkers Ju-88,they mention the EF.059 project,and I think
this early drawing for Ju-88 was also meaning EF.059 ?.
Click to expand...

Also from the same source,here is a mock-up of Ju-85A.

Sorry for double post,but this artist drawing called EF.059 as in old book as I mentioned
in beginning of this topic,I mean this one.

I would rather think, that the EFo 59 was meant, as the EF 59 is said to have been a design
for a 4-engined jet bomber and wouldn't really fit into the timeframe of the EF 50-series, I think.
Click to expand...

Have there ever been examples of EFo numbers being reused in the EF series??

Skyblazer said:
Have there ever been examples of EFo numbers being reused in the EF series??
Click to expand...

I haven't seen any still yet. The EFo numbers known to me ended with the 43, the
EF numbers started with the 50.
S

Jemiba said:
I haven't seen any still yet. The EFo numbers known to me ended with the 43, the EF numbers started with the 50.
Click to expand...


I am right,not only on many books,but even in a magazine,Jet & Prop 2/2004,the EF.59
was twin engined high speed bomber,but it was not from EFo series,it was from EF series
and number 59 re-allocated.

hesham said:
No way,
I am right,not only on many books,...
Click to expand...

Needless to proceed with this discussion ! In our threads about the EF/EFo designations,
it was already made clear, that A LOT of nonsense was published about this theme. So
to rely on any single source certainly is of no avail here. :


it's not single source,but many,first I saw it in English book,second the Russian book as I mention,
third in Jet & Prop and fourth in a Polish book,Monografie Lotnicze Junkers Ju-88,here;