Thought I would post these pics etc on the Planet Satellite light aircarft of the late '40s. It was a four seater built of magnesium alloy,retractable undercarriage fitted with a Gipsy Queen 32 amidships driving a pusher airscrew in the tail,designer was a Mr J.N.D.Heenan,she was built in the Robinson Redwing factory at Croydon,Purley Way,Surrey in 1947,taken to Redhill in 1948 and shown at the S.B.A.C show at Farnborough in September 1948,took up the registration G-ALOI in April 1949,failed to get airborne at Blackbushe despite several long runs down the runway,thus any further attempts to fly her were abandoned. 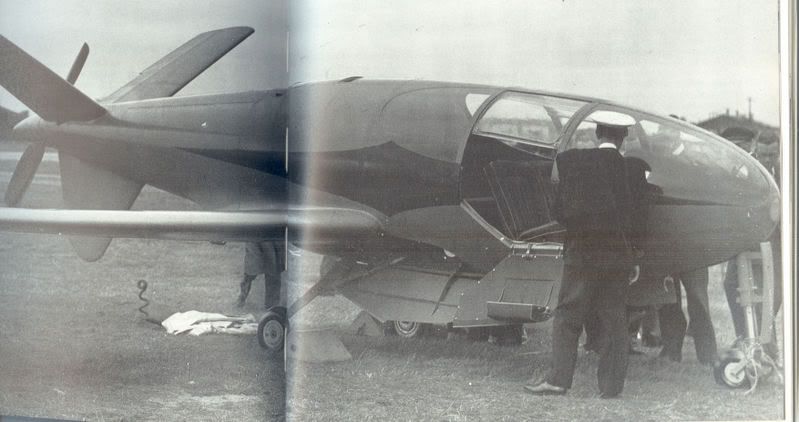 There was a drawing in a wingspan issue, can't tell in the moment
which it was, but I used it as the basis for my drawing

Perhaps we should add, that this helicopter, built by Firth Helicopter and
designated FH.01/4 Atlantic, used the fuselage of the second Planet
prototype ...

Thanks GTX, this is a good candidate I had forgotten for the title of "most beautiful aircraft in the World"...
Thanks Jemiba, your drawings has been a very good basis to invent Satellite-Mustang mixes of mine (see http://www.whatifmodelers.com/forum//index.php?showtopic=4461&st=360&#entry185090 ) ;D
A

You're quite right, but there are a number of other aircraft or
at least projects. For example this patent from Miche Wibault,
for a sports a/c with a pusher prop. Form follows function ...

Maybe it's just me, but this one always made me wonder if it inspired the lines of the BD-5.

There's a good writeup of the project if you are interested.

Hmm this one's new to me! Anyone know what it is?

hmmm...I know it from a reference book called "Macchine bizzarre nella storia dell'aviazione" by Giorgio Evangelisti, but can't remember the name. If no one identifies it by tomorrow I'll dig it out. So rest assured one way or another the mistery will be solved!
S

I've seen it before, but where? British I think. Miles-related perhaps?

It reminds me of the Bugatti 100 racer, but with the prop on the other side!

"Anyone know what it is?"

It's the Planet Aircraft Ltd. Satellite from 1946, which, I think, made just one
short flight and was structurally damaged during the landing. So the project
was shelved, but the fuselage was "recycled" for the Firth Helicopter FH.01/4
Atlantic later.
There was an article in "Wingspan", whose interested in it, just drop a PM.

That's two flying machines I'd never heard of. Educational forum this!
Thanks very much, very interesting.
It's clear the Satellite lost its ventral fin during that landing! :-[

The Wingspan article says, that after the first "flight", or better a "hop", when
the undercarriage had collapsed, the aircraft was in fact repaired again and readied
for another flight. This was a very short one, too and although in this case it landed
without obvious problems, later examination showed, that the forward keel had been
factured, thus ending the very short career of the Satellite.

I did indeed find numerous references to this plane there, for example see http://www.flightglobal.com/pdfarchive/view/1948/1948%20-%201077.html (with nice cutaway drawing)

thanks for solving the mistery! ;D

The Planet Satellite failed due to over-confidence in the strength of its novel magnesium alloy structure and the resulting oversimplification of the design, indicated by needing only 400 drawings instead of up to 3000 that would usually be done for a similar sized conventional aircraft.

It was built in 1948 and first flew in April 1949. Normal landing stresses were sufficient to break its keel on the first landing. There is a good article in Aeroplane Monthly (October 1983) which has a reprint of the 'Flight' cutaway drawing in which you can see the lightly designed keel, a ventral 'backbone' that was optimistically expected to take the major stresses.

As 'Roger Bacon' would have said - "sudden but not entirely unexpected...'twang!"

Despite all the above it was a very pretty plane.

A beautiful cutaway of the Planet Satellite from the French Science et Vie (Special Aviation 1949 issue). I'm also attaching a picture of the Burney Satellite, a design that somehow seems related to it.

From Wikipedia The Chief Test Pilot at RAE Farnborough, Group Captain H.J. Wilson (holder of the World speed Record in the Gloster Meteor), after several long runs down the runway, managed to get the Satellite airborne at Blackbushe. The first "hop" was followed by the collapse of the undercarriage. After repairs, the prototype was flown off the ground and after reaching an altitude of barely 20 ft was put down on the ground gently but nonetheless, the main keel had been cracked by the force of the landing. The conclusion of the Air Registration board investigating the "accident" was that the aircraft was badly understressed and would necessitate a complete redesign.
The manufacturers had already begun the production of a second prototype and despite an investment of £100,000, chose to wind down the program with no further attempts to fly the Planet Satellite.
The second prototype, registered G-ALXP was abandoned but the completed fuselage was incorporated into the Firth Helicopter, built in 1952 at Thame. The single "flying" Satellite languished at Redhill until 1958 when it was unceremoniously broken up.

Jemiba said:
Perhaps we should add, that this helicopter, built by Firth Helicopter and
designated FH.01/4 Atlantic, used the fuselage of the second Planet
prototype ...
Click to expand...

I'd like to add to this, though slightly off-topic.

The FH-1 was based on patents by Landgraf when his company folded in 1949 (due to the withdraw of funding from the military to further develop the H-2 helicopter). It's possible that the FH-1 would have been the "H-4" four-seat proposal of the H-2, had it been developed by Landgraf.

I can't remember where I obtained the below photos:

Hi all.
I am currently researching the Planet Satellite and would love to see more research material, photos or artworks.

Does anyone have scans of the Aeroplane Monthly article from 1983?

I would like to produce a large article on this most fascinating subject, following on from Don Middleton's excellent work on this subject.

In case you are interested here is a link to the Hushkit blog's subjunctive history of the Griffon-engined Hurricane: http://hushkit.wordpress.com/2012/06/12/the-ultimate-what-if-fighter-the-griffon-powered-hawker-hurricane-mk-xiv/

Is this the last instance anyone can think of of a professionally-designed conventional aircraft proving unable to take off? In the late 40's, England must have been crawling with competent but underemployed aircraft engineers - I wonder how the team behind the Satellite got the job.

If my memory serves me right, it actually took off, but was damaged during the landing
due to structural deficiencies.
H

It flew to about 20 feet, but the main keel collapsed on landing. The aircraft required re-stressing, but this was considered too expensive.

I am currently researching the Planet Satellite light aircraft for a magazine article and am very curious as to the type’s relationship with Shute’s Satellite Torpedo-Bomber-Fighter, 4. Was Major Dundas Heenan involved in the earlier concept, did he know Shute?
Both aircraft are small pusher aircraft, of a similar configuration sharing the same name, surely there is some connection?

At least the article in Winspan issue March/April 2001 didn't mention such a connection, but gave the reason
for the pusher layout, chosen by Heenan, as giving a much more streamlined nose section and better isolation
against engine noise. That sounds, as the Satellite was a then new design, not based on other types.
S

hushkit said:
I am currently researching the Planet Satellite light aircraft for a magazine article and am very curious as to the type’s relationship with Shute’s Satellite Torpedo-Bomber-Fighter, 4.
Click to expand...

Don't know about this project. Is it similar to the "Burney Satellite" as shown here?
http://www.secretprojects.co.uk/forum/index.php/topic,1170.msg150686.html#msg150686
H

The Burney aircraft is the same as the Shute design, but by another name.


I suggest you take a photo of everything you have and post it here. How many pages in the book, what does it contain? Detailed drawings would be interesting for some.


Ultimately its worth exactly what someone will pay for it. If you are lucky, someone is interested in this specific plane.

Some more photos after conversion to a helicopter:

Skyblazer said:
A beautiful cutaway of the Planet Satellite from the French Science et Vie (Special Aviation 1949 issue). I'm also attaching a picture of the Burney Satellite, a design that somehow seems related to it.
Click to expand...

With regards as to the Burney Satellite, it would seem to have been actually the Planet Satellite's WWII ancestor, intended as the primary payload of the Burney Amphibian: http://www.secretprojects.co.uk/forum/index.php/topic,3813.0.html

With Sir Dennis Burney and Sydney Hansel, Shute is involved in the specification and design of the Burney Amphibian. A huge six-engined airborne aircraft carrier, it carries 4 torpedo-laden fighter-bombers within its wings. Never built, the aircraft is typical of Burney's adventurous approach to design.


The Satellite Torpedo-Bomber-Fighter, 4 of which were housed in and launched from the wings of the Burney Amphibian, was 26 feet long with a 17 foot wingspan. With a top speed of 360mph and weighing 5,300 pounds, the Fighter had a real Buck Rogers look.
Click to expand...


here is a mobile-car or flying car from Planet,I can't make a bigger view to can read.