elmayerle said:
Word I had from a former co-worker who was at NAA-Columbus from circa 1950 to the early 1970's is that the single vertical was a USN request; no details as to why. This is strictly my own opinion, but it could be that going to a single vertical made for a distinct reduction in the cost of the forged and machined frame that included all the tail surface spindles. From what he said, the cost of re-designing this frame was one reason Vigilante derivatives with engines larger than the J79 were not extensively considered.
Click to expand...

I've previously read similar elmayerle!
What I read was along the lines that the USN was very uncomfortable with the advanced concept of twin tail arrangement.

Boucing off all the above: the Soviets put two tails on their Vigilante-inspired E-155...
D

When the MiG-25 was first revealed to Western eyes in July 1967, some Western analysts thought it was a strike aircraft like the A-5. A case of mirror-imaging. 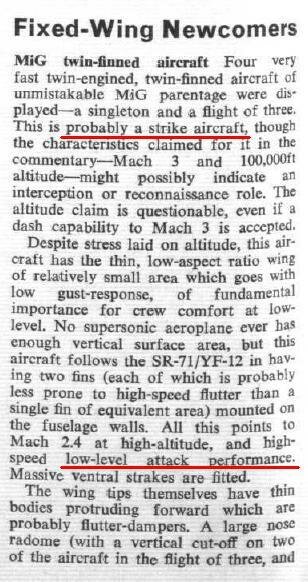 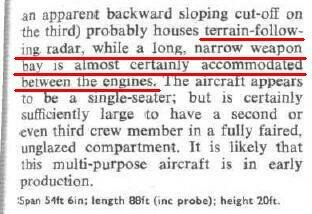 Well they were only half wrong as the MiG-25 later got attack capability and variants...

If you plot out the immediate predecessors to the MiG-25, and the early designs, it is clearly part of a smooth process of evolution. The diagram goes from left to right. 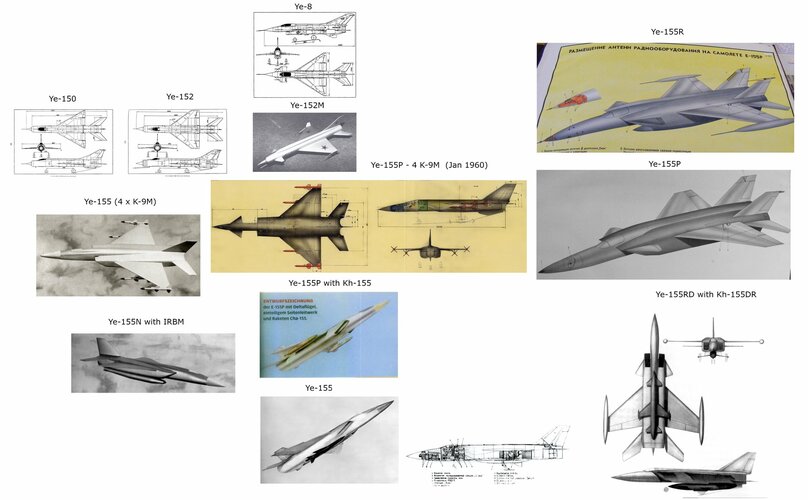 The earliest Ye-155 design (from 1958 - 1959) has a near identical wing to the Ye-152, being a cropped delta in order to carry wingtip missiles. The Ye-155 was in fact a reasonably simple enlargement of the Ye-152 configuration, with the engines moved outboard to accommodate more fuel in the fuselage also leaving the nose free for a large radar. Armament remained 4 x K-9M missiles as on the Ye-152. The canopy is barely visible, almost F-103 territory. Born in the missile era, it was initially intended to reach 4,000km/h and have mixed jet/rocket propulsion, but this was scaled back to a more achievable 3000km/h and purely jet propulsion. As well as interceptors, other roles were intended from the beginning, including a ballistic missile launcher.

The first design layout revision (by late 1959 - early 1960) added canards to improve supersonic stability. This was a short-lived fad seen on the Ye-8 and intended to be used on the Ye-152M and Ye-155 as well.

Then we have the next major change to the layout. The cropped delta wings are replaced by swept trapezoid wings, and the canards are moved rearwards. Twin vertical tails replace the single tail. It already looks like a MiG-25 now.