Hi friends, about the ever-fascinating and intriguing matter of disc-shaped wing aircraft I found some very old paper clippings depicting the Nemeth aircraft, I think designed by the same Paul Nemeth that in the following years designed and built an helicopter (already subject of posts in this blog). My clippings are dated March 1934 and the subject is an experimental aircraft apparently named Circle (and not Umbrellaplane as some sources reports) designed by Stephen Paul Nemeth, veteran Chicago aeronautical engineer. Below there is an abstract from e Russian webpage I think is a copy of the Aerofiles one. Another design called the Umbrellaplane (sic) was also known as the Roundwing. It was built in 1934 = 2pOhwM; 90hp Lambert; span: 16'0" length: 20'0" v: 120/95-100/20-25. Circular wing on a lengthened Alliance Argo fuselage for STOL performance [X13651]— initial experiments by Paul Nemeth with rotating wingforms go back to 1929. Designed by Nemeth and built by students at Miami University (OH) to test circular wing configuration. Repowered with 120hp Warner Scarab, later reworked as divided wing. Name has been seen spelled Nuneth. For the aircraft we found also the names Roundwing and Backyard Flyer. The fuselage is that from the Alliance A-1 Argo light aircraft (I also enclosed a photo of it) with the original 90 HP Lambert engine replaced by a 125 HP Warner; in fact, usually Argo had a Hess Warrior seven-cylinder radial, rated at 125 HP. Naturally, the wing, perfectly round, is totally new. This strange machine was really flown, as we have a still from film footage, reaching 110-120 mph (the designer claimed 135), cruising at 95-100 mph and landing at 20-25 mph in a 25 ft area, descending with a 60° angle. The news of the first fligh is dated March 21, 1934. I ever heard from aeronautical engineers that this type of low aspect ratio wing offer very marginal performance, except for STOL, but in about a century of flight the disc-shaped aircraft every so often resurface Nico

Nice pics! I have a better version of last one here, as well as a pic of the Alliance A-1 Argo, which I think was an earlier version than the one you posted here (look at the tail fin):

Another view of the Nemeth Roundwing:

here is a strange airplane Model with levitator,designed by Mr. Nemeth
in 1935,I can't understand its work well ?,page 300,I think he was the same designer here;

Steven P. Nemeth's aviation career is not very well known. Besides a couple of cyclogyro projects in the 1920s and his obvious Roundwing of 1934 (also known as the Umbrellaplane), Nemeth also set up the Nemeth Helicopter Corp. after World War 2 and developed a two-place anti-torque helicopter with ramjets at the tips of the single rotor's two blades. Apparently the machine was finished and was tested in 1947. Unfortunately, I have never been able to find a photo of it. Could anyone help?

here is a strange airplane Model with levitator,designed by Mr. Nemeth in 1935,I can't understand
its work well ?,page 300,I think he was the same designer here;

It looks as if it is basically a tandem-wing ornithopter. The longitudinal frame is driven to oscillate like a see-saw. Each wing therefore moves alternately up and down, just like a flapping bird except the wings are out of sync. With careful cycling of their angles of attack, the wings can each contribute fairly constant lift but take it in turns to provide the thrust on the downstroke, giving the pilot a reasonably smooth ride.

It's clever and it's a lovely idea. I want one that's painted up like a Chinese dragon and designed to be ridden from a saddle!

There is an added subtlety in nature, in that many if not all birds also move their wings a little forward and backward out of phase with the flapping so they move more in a figure-eight than simply up-and-down, It improves STOL performance and, I think, makes the thing more efficient while allowing the body to remain steadier. It is not clear from the limited information given whether Nemeth slides his wings fore and aft to mimic that.

And I think there is one potential drawback. The power source for the see-saw must react against the fuselage or some other massive body and make it rock in the other direction. Compensation cannot be integrated with the lift distribution on the see-saw or you would have perpetual motion. So it would still be a rocking ride. A bit like riding a dragon, I suppose
S

Proof that Nemeth always had extremely unconventional ideas for flight, this 1929 "paddle-wing" system for one of his failed Cyclogyro projects:

Hi Stargazer, only four years late but here's a pic of the Nemeth Helicopter, taken from https://sites.google.com/site/stingrayslistofrotorcraft/nemeth-helicopter. This is also on this site at https://www.secretprojects.co.uk/threads/nemeth-ramjet-helicopter-design.606/ along with a second image of an earlier iteration of the design I would surmise. 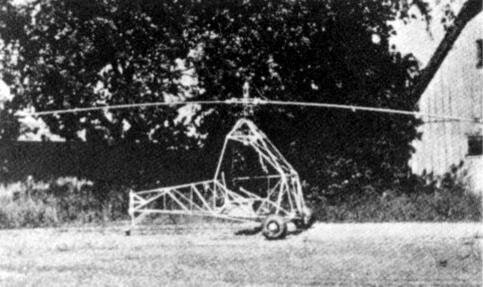 here is explanation for his activities,included his Odd Project,
which was displayed on reply # 5.