I can't identify this Lockheed aircraft transport which based on Constellation,
it had double deck,I know it was from Flightglobal artist drawing but may be
it was really Lockheed project.
http://www.flightglobal.com/pdfarchive/view/1946/1946%20-%201496.html

That's the Lockheed R6V Constitution, as mentioned in the article.

Yes, not exactly a 'secret' project since it was actually built, though it never entered serial production. Either way I don't object to this thread's continued existence.
C

This is a photo my Dad took of an R6V Constitution. The picture was taken in 1951 in Kodiak, Alaska.

My Dad was a USN flight engineer (Aviation Machinists Mate), and that's his P2V Neptune in the background.

rare stuff in rare place for her, thanks!

Super Airlifter for the Navy!

A great looking and capable design!
Unfortunately another ambitious design which was underpowered (and to a large degree a duplication of USAAF projects of the time to produce a strategic range transporter!)

Consolidated XC-99, Lockheed XRO-6 Constitution, Boeing 377, Douglas XC-74 (first versions) were all initiated after the fall of France, in a context of solo-US facing Fascists...without the bases of a Brit Ally, assumed to have thrown in the towel. UK's DC Mission did not grasp that purpose, reporting them breathlessly, so they were all perceived as the future for civil air transport - Big will be Beautiful, like Transatlantic liners. So, to sell against them, UK chose Big-with-propellor-turbines: Bristol T.167 Brabazon, Saro SR.45 Princess. France, too tried dinosaurs. What the nascent airline industry needed was Bristol Theseus or RR Clyde turboprop Connie (which Bristol Aeroplane Co. did licence in 1947 as L-849, thwarted by £ collapse).
S

From my collection of pictures found on the web:

Hey great video!
How is that banking landing (time 2.47). I think the pilot has had some carrier time, with that approach!
Did Kelly Johnson have anything to do with this design?
Very neat RATO arrangement indeed!

I always thought it'd be a great piece of what-if art to do a pic of LAX in the late 1950s with commercial versions of the XC-99 and the R6V in airline markings, possibly with cargo versions in the livery of the short-lived Santa-Fe Air Cargo line (yes, operated by the railroad just after WW II, the ICC shut them down for competing with the airlines) and/or equivalents affiliated with other railroads.

Beautiful! Those 1940s and 1950s magazine are certainly ripe with forgotten treasure...

Constitution and her younger sisters - again thanks to CodeOne

The Lockheed family of airliners and transports is shown on the ramp at Burbank, California, circa 1949. At the rear is the mammoth XR6O-1 Constitution double-deck transport for the US Navy. Wedged in the middle (left to right) are a Model 10 Electra, Model 12 Electra Junior, and a Model 18 Lodestar. In the foreground is a Model 749 Constellation that will be delivered to Air France and a Model 1049 Constellation that will be delivered to Eastern Air Lines. The Air France Connie (F-BBDV) was the last Model 749 to roll off the assembly line and the Eastern aircraft (N6202C) was the fifth Model 1049 to be produced.
Click to expand... 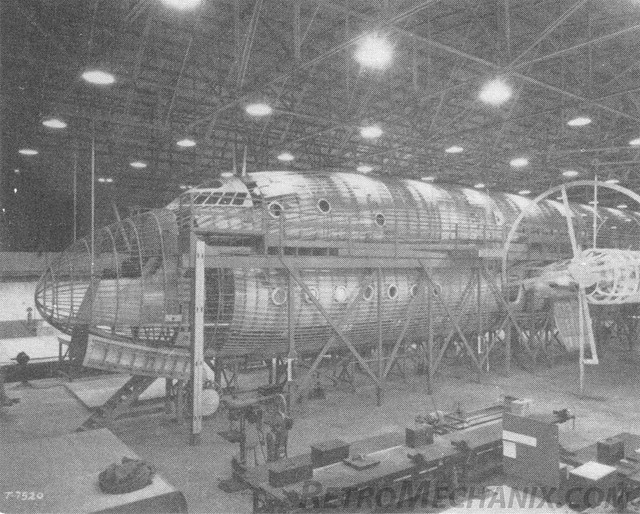 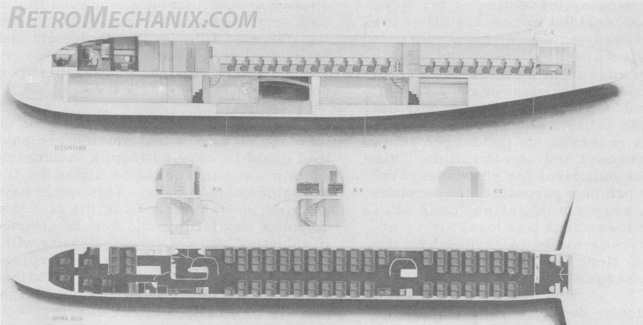 The accompanying gallery reproduces the "Lockheed Constitution Development Story," a publication from December 1950 summarizing the design and development of the aircraft with numerous detail photos and drawings, including deck plans of an unrealized commercial airliner variant. The brochure was likely part of a marketing effort to a sell a turbine-powered version of the Constitution to the airlines of the day, an effort which ultimately failed, as the aircraft was judged too large and impractical for commercial use.

This behemoth has sigificance for the UK (and French) Aero-industries. Its mock-up, dwarfing Connie, was seen 11/42 by a visiting team from UK's Ministry of Aircraft Production.Chairman 22/11/42-11/11/43 of the Br. Supply Council in US was ex-MAP Col.J. Llewellin, his Deputy, was J.Monnet who had headed France’s Purchasing Mission: both thought to know the Air, so detected civil potential. Their Reports led directly to UK's decision to try to compete with DC-4 and L-049, not head-to-head, but with turbines and size: so, Bristol T.167 Brabazon. France revived marine giant Latecoere 631

All were superior to UK bomber-transports; who could anticipate that all would lapse, or shrink to 4 pistons?

Fascinating. An explanation for three giant mutant aircraft...
B

From the National Naval Aviation Museum page on Facebook.

Notes: Prior to the entry of the United States into World War II, Lockheed and other companies
sought to design long-range landplanes for use by the nation's burgeoning airline industry.
With the outbreak of hostilities, the Navy agreed to sponsor the Lockheed design, which
resulted in two examples of the XR6O-1 Constitution. Some 156 ft. in length with a 189 ft.
wingspan, the aircraft could accomodate a maximum of 204 military passengers. The two
aircraft were not completed until after World War II, the first flight occuring on 9 November
1946. Redesignated XR6V-1s in 1950, they were initially assinged to VR-44. The aircraft were
placed in storage in 1953 for lack of spare parts and stricken in 1955.
Click to expand...

jzichek said:
Check out this article on RetroMechanix.com on the Lockheed XR6O-1 Constitution:
Click to expand...

"Burbank CA: The wraps are taken off the new Lockheed 'Constitution,' 168-passenger plane built for the Navy and soon ready for test flights. The 92-ton dreadnaught will be able to fly to Tokyo in 19 hours." scenes of the Navy land-based transport airplane. (partial newsreel)

Another find in the Aric Aldrich Collection. Look at the tip of the 880's vertical tail and you will see one of the Constitutions in flat paint with no markings. The notation of the back of this print states that this Douglas D. Olson photograph was taken at Mc Carran Field on April 13, 1959. 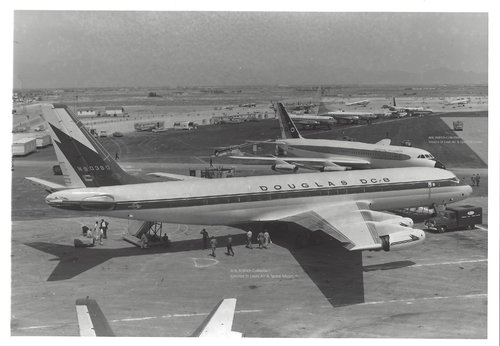