in the Flightglobal site two unknown British flying wing airliners,one
from AW and the other I don't know its company,any help.


hesham said:
from AW and the other I don't know its company,any help.
Click to expand...

Please Moderator,feel free to transfer it to a proper section.

Note with interest the timing, 5/46, of the Ailes piece. A recurring "scandal" for conspirators is "monumental blunder" cancellation, 2/46 of supersonic Miles M.52.

B.Lockspeiser,D.Scientific Res.(Chair,MAP Supersonic Cttee.) had funded M.52 29/12/43; (Sir Ben), DGSR(A)/MoS chopped it because we now had no Formed Force enemy and he had only a very modest Aircraft Research budget (UK was broke). He applied it to RAE's perception of innovation of civil potential: VG (Barnes Wallis extracted an expression of interest from new BOAC's MD Whitney Straight, so the Swallow models were funded), Flying Wing (MoS/RAE had a "Tailless Committee") and to suction for laminar flow (MoS "Boundary Layer Control Committee"). So he continued to fund A.W.52G/A.W.52 (and schemes at HP which would lead to an airfoil mounted dorsal on a Lancaster, then Lincoln and at Marshall's with a Budworth turbo-sucker in an Auster as MA.4). A.W.56 bid to 1947 Medium Bomber was suction laminar flow/flying wing.

It was nobody's fault that we must wait decades for Northrop B.2.

if there was a suitable funding ,we could see many beauties in the sky.

here is a hypothetical drawing to AW.52G.

.......and featured in many advertisements at the time.

Schneiderman said:
.......and featured in many advertisements at the time.
Click to expand...

Two more illustrations from Fedden's paper. Fuselage similarities with the project shown in my last post so more than likely also Armstrong Whitworth

And the jet mailplane. This would probably be for Brabazon Type IV 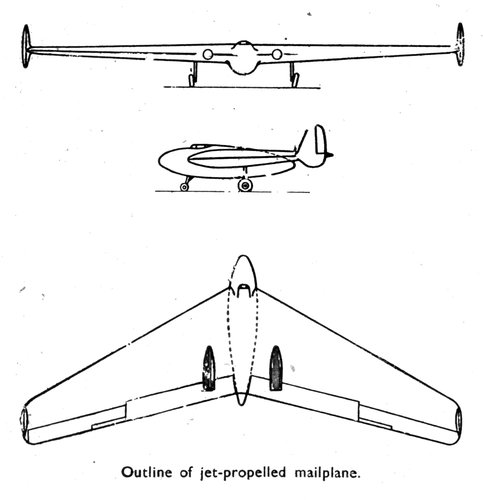 Armstrong Whtiworth also desgined the AW.50 and AW.56, with the Aw.50 being an experimental jet bomber design from 1943 and the AW.56 being tendered to the same requirement as the Vickers Valiant, the Avro Vulcan and the Handley Page Victor.