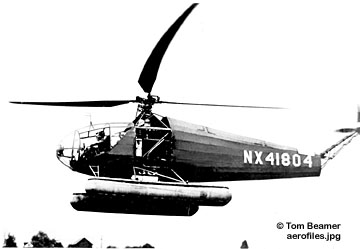 America's number one shipbuilder, Kaiser Cargo, Inc. (part of the vast Henry J. Kaiser enterprises) entered the rotary-wing field in 1944 through its recently acquired Fleetwings Division. Fleetwings was an old and honoured name in American aviation: at the time it was purchased by Kaiser in 1943 (becoming the Fleetwings Division of Kaiser Cargo Inc., Bristol, Pennsylvania), it was operating two plants producing component parts and hydraulic valves for wartime airplanes such as Corsairs, Avengers, Fortresses, Havocs and Seawolves (All told the company built over $73 million worth of aircraft parts and components during World War II). The plants operated by Fleetwings were never constructed, tooled, or laid out for the production of entire airplanes in quantity, but were established and operated primarily to provide the component parts, such as wings, fuselage sections, tail sections, etc., under subcontract for the types of planes mentioned above.

In addition to all the sub-contracting work, Fleetwings made various, often secret experimental aircraft such as the BTK bomber-torpedo, the BT-12 Sophomore trainer, the PQ-12 piloted drone, the BQ-1 and BQ-2 radio-controlled flying bomb and the cancelled A-39 Army attack. The Kaiser Fleetwings XH-10 Twirleybirdwas designed at Henry J. Kaiser's instigation by a Franklin Institute team led by Ralph H. McClarren, and resulted from five months of strenuous work.

The designation "XH-10" can be misleading since it was purely a company designation (also found elsewhere as plain "Model H-10") and the type was never evaluated nor even tested by the Army Air Corps. Described variously as the "Kaiser helicopter" or the "Fleetwings helicopter" by the press of the time, the XH-10 was conceived to be carried on the deck of Kaiser's merchant cargo ships (his famed "Liberty ships") for anti-submarine protection.

The Twirleybird was a side-by-side cabin design, built of welded-steel tubular construction and powered with a seven-cylinder, radial air-cooled engine mounted with the crankshaft vertical, driving one three-bladed main rotor and a vertical tail rotor for torque compensation. Its most original feature was the fact that it was equipped with rubberized floats instead of wheels.

Two examples of the single-rotor XH-10 are said to have been built, but presumably only the first example was completed and registered (NX41804), being flight tested on a lake in the Bristol park in 1944 and in 1945 by "Slim" Soule. The Fleetwings helicopter program briefly revived Kaiser's hopes for succeeding in aviation, but helicopter technology was still very young in the 1940s, fraught with complex and poorly understood aerodynamic problems, and the project never succeeded, being halted shortly after the end of World War II.

Interestingly, this was not the last involvement of The Fleetwings division with rotorcraft. In the late 1950s, they investigated designs for a turbine-powered four-place observation helicopter for the Army. By 1961, however, defense contracts slacked off and losses mounted, forcing Fleetwings to close its Bristol operations permanently in the late summer of 1962.


NOTE: only one photograph of the XH-10 seems to be available... If anyone has more it would be nice to add it here. Thanks!

Fleetwings built the stainless steel pylons under contract for the Platt-LePage XR-1 and XR-1A/YR-1A airframes.
W

Another picture of NX 41804 I found (long time ago!). Sorry I do not remember the source.
Has anyone information on the make of engine or dimensions?

Neat picture! Thanks for sharing. I'm attaching it here on its own:

hesham, your enthusiasm about that German file should not keep you from verifying first if we don't have topics covering these types already.

I have moved your post here, but you'll find that the image you posted is not only difficult to exploit in that form, it is also a duplicate of a better quality image posted just above.

The German file is great, I also was enthusiastic when I found it a few months ago... I found lots of types there that I didn't know and even planned to cover them here in the near future... but only after I research them properly and not in an erratic, disorganized way.

I have spent a lot of time cleaning up and organizing the information on this forum, and I do not want to be doing that constantly!


come down,if you mentioned that source in your post,of course,I will not
repeat it,because I use the search at first,and I think this helicopter was
for Hiller-Kaiser as they wrote on it.
J

Dear Hesham, whilst I sympathise with you in that you thought the Hiller Kaiser was a previously unknown design, a more closer inspection of this file - which is frankly an extreme mess as there is no sensible order in the way the material is presented - should have warned you that the data is extremely unreliable.
My expertise is limited to US military aircraft but I noticed the following flaws:
p. 41: a Sikorsky S-67 is identenfied as VH-60A, MH-60S
p.42: a H-60 version is identfied as CH-53
p.63: a drawing of a Gyrodyne 50 is identified as Karman (yes, Karman)
p.75: shows various pictures of H-21s but does not identfied them as such
p.121: a Lockheed design that looks to me like the Curtiss Wright VZ-7.
As I said, I have limited or no expertise of German, British and French designs, but I would be very reluctant to publicise any of the information presented in this paper without further verifying that it is correct.