In AVIATION, September 1946, I've found these photo of the Kaiser-Fleetwings
XBQ-2A and the YPQ-12A "pilotless bombers".
Does some of the sources mentioned in the thread about the similar Interstate drones
give more information, perhaps even drawings ?
(sorry for the bad quality, those old issues are forbidden to be copied or scanned,
so the only solution is to take photos)

The YPQ-12A looks like it's based off an Erco Ercoupe, a common light aircraft of the time.

"The YPQ-12A looks like it's based off an Erco Ercoupe"

This resemblance is indeed mentioned here, too, where you can find
two more photos of these types : http://www.airfields-freeman.com/PA/Airfields_PA_Philly_NE.htm
The YPQ-12A is called an aerial target here.
S

The BQ- designator refered indeed to the "pilotless bomber" types (exemplified by the later BQ-7 and BQ-8 versions of the B-17 and B-24 bombers), while the PQ- designator was used for "aerial targets" (replacing in fact the former A- series starting with the A-8/PQ-8 Culver Cadet.

Please note that the Erco Ercoupe was also tested next to the Kaiser-Fleetwings YPQ-12A, but as the XPQ-13A, so I believe these were competing designs, hence the resemblance.
J

For some more pictures

This may be stating the obvious but the Fleetwings Model 36 was of moulded plywood construction while the Erco YO-55/XPQ-13s were made of aluminum.

In 1941, Erco got Vidal to design a moulded plywood fuselage for their planned birch and plywood Ercoupe. Two wooden Ercoupes were completed in 1941, the same year that PQ-12s were produced. It seems unlikely that the Ercoupe providing anything other than layout inspiration. Unless Vidal is the connection. Does anyone know of any Kaiser-Fleetwing dealings with Vidal Research Corp.?
F

I currently have a '46 'Coupe in my shop for inspection. Other than being similar in layout, that's about it, altho the tail looks quite a lot like it came off an Ercoupe, no doubt. However, the rear edge of the cowl is different, as is the aft fuselage & I can see that wings trailing edges are tapered, where the 'coupe's is straight. It looks like a thinner airfoil, too. The landing gear struts look too tall, but it's really hard to tell anything about them with all those fairings other than that. So, IMHO, just another case of looking similar, but certainly not much to say it's based on the Ercoupe.


Apophenia said:
This may be stating the obvious but the Fleetwings Model 36 was of moulded plywood construction while the Erco YO-55/XPQ-13s were made of aluminum.

In 1941, Erco got Vidal to design a moulded plywood fuselage for their planned birch and plywood Ercoupe. Two wooden Ercoupes were completed in 1941, the same year that PQ-12s were produced. It seems unlikely that the Ercoupe providing anything other than layout inspiration. Unless Vidal is the connection. Does anyone know of any Kaiser-Fleetwing dealings with Vidal Research Corp.?
Click to expand...

Most probably the Air Corps specification called for a light twin-tail single-engine aircraft, and there were not many ways to get about it, really...

Jemiba, thank you for the interesting article.

Well, as nobody came up with a 3-view, I've tried on my own, using the available
photos, thanks for your help. Externally, I couldn't find other differences between
the XBQ-1 and the -2A, than the engines. Both aircraft had a landing gear, that
doesn't look jettisonable, as to my opinion wheel spats would have made no sense
then, but of course the mechanism isn't visible. Clues and critics welcome !

Awesome stuff! Jemiba, you must have spent a great deal of time on these, but it sure was worth it!

As for differences between BQ-1 and -2, here's what I have:

Can anyone add to this or correct it?

Here's the other one of the mentioned Kaiser-Fleetwings radio controlled aircraft. Thanks
to copies I've got from lark, we even have 3 versions of it : A piloted one (for ferrying or
test flying), a radio controlled target and a bomb version. As nearly all photos were made on
the ground, I'm still unsure about the correct planform of the wing, but at least it can be
seen, that it was a trapezoidal wing and a rectangular tail plane, obviously different from the
Alon Ercoupe.

The XBQ‑1 was a twin engined radio controlled assault drone missile with provision for a pilot. One aircraft was built with serial 42‑79561. It crashed on its first flight 17 July 1944 and the programme was cancelled in May 1944. Studies resulting in the design were undertaken as project MX-53.

]And BQ-2, no mention of the Fleetwings type number.

"The possible accuracy of this system was demonstrated in October
1943 when a YPQ-12A airplane, equipped with the inferior Block 1 television
equipment, was expended against a 30 foot square target. The point
of impact was only 30 feet from the target."

The Block 1 television system came from the US Navy's TDR-1 program. The TDR-1 guidance system was the basis of the PB4Y-1 Liberator drone that U.S.N. special air unit, codenamed Project Anvil, prepared for Joseph Kennedy Jr to fly in 1944.


After Project Anvil literally blew up in the US Navy's face during the Operation Crossbow hunt for German V-1 Buzz Bomb sites (killing Joseph Kennedy Jr in the process) it abandoned the TDR-1 guidance technology to the USAAF. The USAAF then replaced the "Double Azon" system cobbled together by the 8th Air Force and proceeded with the "Weary Willie" program using the superior TDR-1 TV guidance system, AKA "Castor".

Just before the end of WW2, the "Weary Willie" program was renamed the "Abusive" program. This utterly confused post-war histories as most immediate unclassified post WW2 documents did not include the "Abusive" code words and no one publishing later WW2 histories has bothered to look up the declassified "Abusive" documents decades later.

The B-17 missile XBQ7 or B-24 missile XBQ8 without TV guidance was was known as "Willie Baby" under the "Weary Willie" code word and was "Cottongrass" under the "Abusive" code word. Either name refered to a area target/buzz bomb equivalent that came in three different versions with preset guidance, some or complete ground control.

The same B-17 & B-24 missiles with TV guidance were "Willie Orphan" and "Corticated" under the respective "Weary Willie" and "Abusive" code words. These also came in three versions with a mother ship and varying degrees of TV and radar beacon guidance.

From the Gerald Balzer Collection, the YPQ-12A and the XBQ-2A.

That's a new one

Late to the party, but I have some info and pics to add.

My Dad was the chief test pilot for Fleetwings from the late 30's through the mid '40's.

As mentioned above, the twin engine plane is the XBQ-1; I've attached the Fleetwings pic that was used in the article. 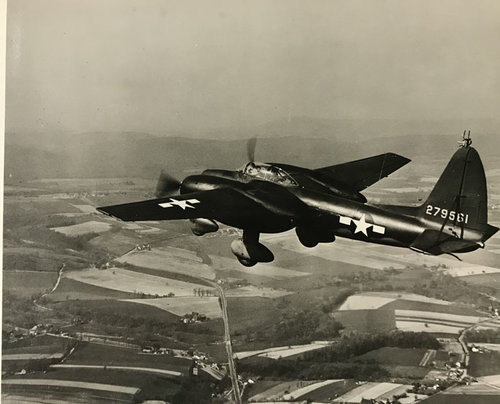 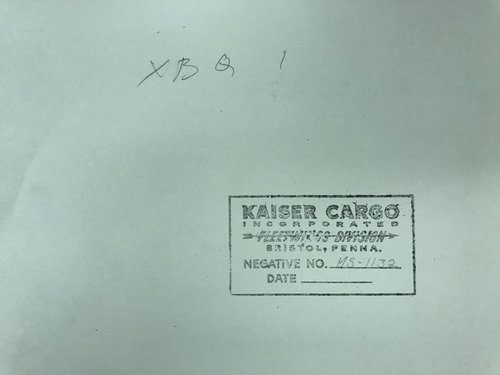 The third pic posted by Mark Nankivil of the XBQ-2A has my Dad in the cockpit. Here's the colorized version of the pic: 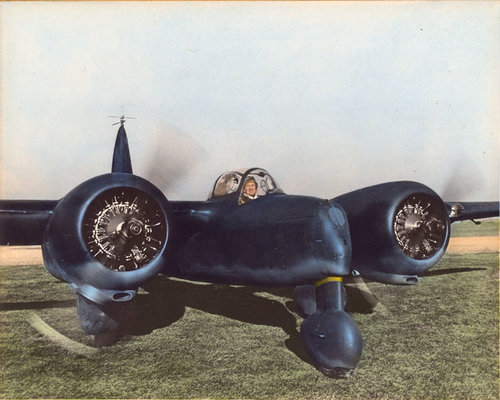 I have some of my Dad's logbooks from that era. From Logbook 6A: The XBQ-2 "Initial Test Flight" was August 21,1943. The XBQ-1 "First Test Flight" was January 16,1944 (but I'm thinking it was mis-dated as to year. During this time, his logbooks are jumbled and have many hand writings - info transcribed into his personal logbooks from the aircraft logbook(s) as time permitted).

Currently a webpage is being constructed about my Dad; his logbooks 2 to 5 are currently online if you're curious. Logbook 6A will also be online at some point after scanning issues are resolved).

His webpage can be found here:

Now as to the other Fleetwings project mentioned above, the PQ-12, I've got some more pics to share and then a couple mysteries you can help me solve. The pics: 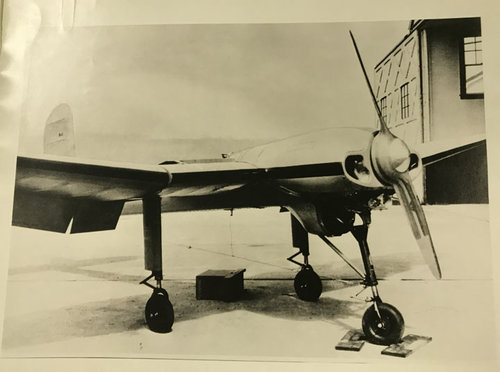 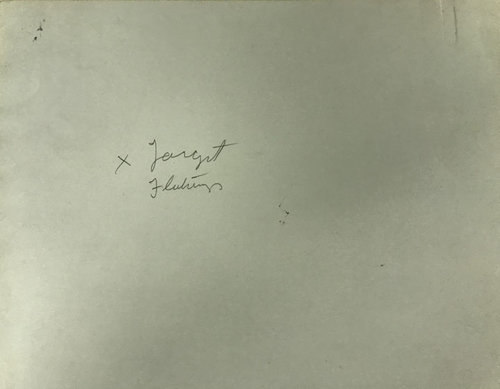 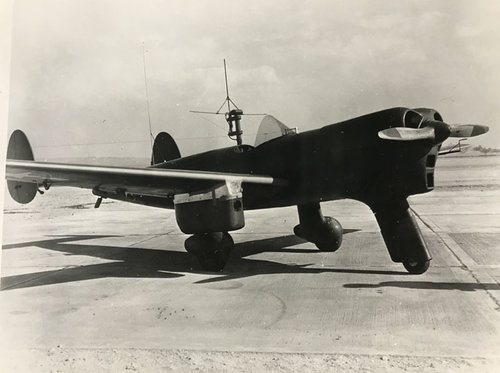 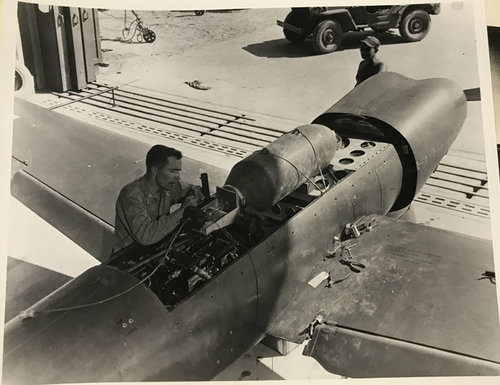 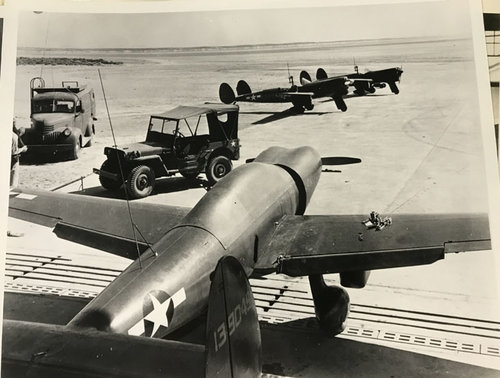