This concept is from my AH project "Savioe Cross". In short - in 1943, Mussolini was a bit quicker, and managed to broker peace with Allies before the Victor Emmanuel III. Italy managed to came out of Axis more orderly, and successfully repel (with Allied help, of course), German invasion. But as part of the dealt, Italian Navy units were send to Indian Ocean to augment Royal Navy, and make possible push for Sumatra and Singapore in 1944.

After initial operations on Indian Ocean in late 1943, it became apparent, that Italian Expeditionary Force were not well-suited for the new combat conditions. Fighting against Japanese ships and planes over ocean was quite different from fighting against British in Mediterranean. New tactical and technological approach was needed, including the new “standoff” guided weaponry.

The existing examples – radio-controlled torpedoes and full-scale assault drones – were considered too complicated to use, and ill-suited for “general” kind of operations. A new, simpler, air-launched weapon was required.

For the basic of subsequent work, Frederico Zapelloni torpedo glider (“hydrobomba”) was adapted. It was decided to fit it with some kind of remote-control, or self-homing system, which would allow it to be used from torpedo bombers against Japanese warships. A significant number of proposals were received and evaluated; in the end, three parallel programs were initiated: 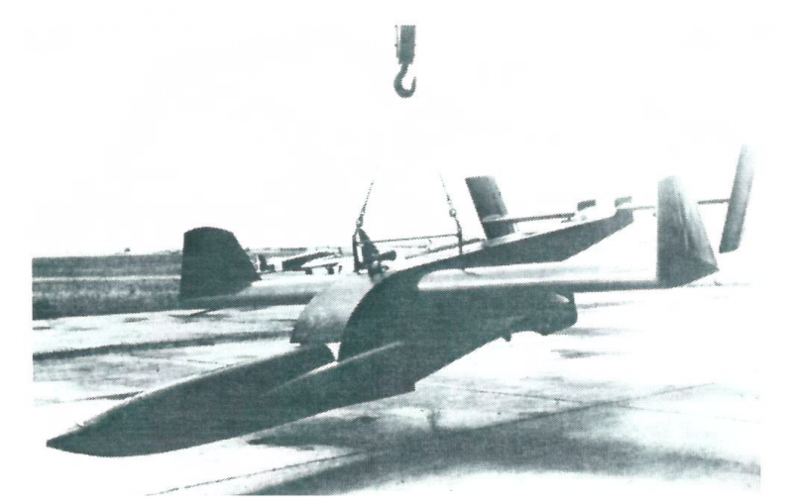 * Radio-controlled bomb glider, armed with 800-kg GP bomb. Essentially, it was the simplified version of radio control system, used on “Aeronautica Lombardia”-type flying bombs. The main advantage was, that the control system was already developed and tested, and has been in service for some time. The main disadvantage was, that missile was not as “stand-off” as hoped, since the control plane needed to follow it close by, so the onboard operator could see the missile tracer.

* Auto-piloted bomb glider, with the homing acoustic torpedo as a payload. The homing version of Motobomba FF circling torpedo was suggested. This program have an advantage of simplicity; the glider only needed to carry the torpedo in general proximity of the target (which could be achieved by gyro autopilot), and the torpedo would home on it, using simple two-dimensional guidance. Problem is, that there weren’t any acoustic torpedo immediately available, and it wasn’t clear how long it would take to make one. In the end, this program was taken over by Regia Marina, since the development of acoustic torpedo was ruled to be within their responsibility.

* Autonomously-controlled, self-homing bomb with photo-contrasting seeker, armed with 800-kg GP bomb. While this was by far the most ambitious project, it was also the most promising one - and essentially it was the one, chosen for subsequent developement. Self-homing, "fire-and-forget" weapon promised significant advantages over any kind of remote-controlled one. The initial goal was to obtain the operational "Fotobomba" by late 1944, but it was deemed way too optimistic. 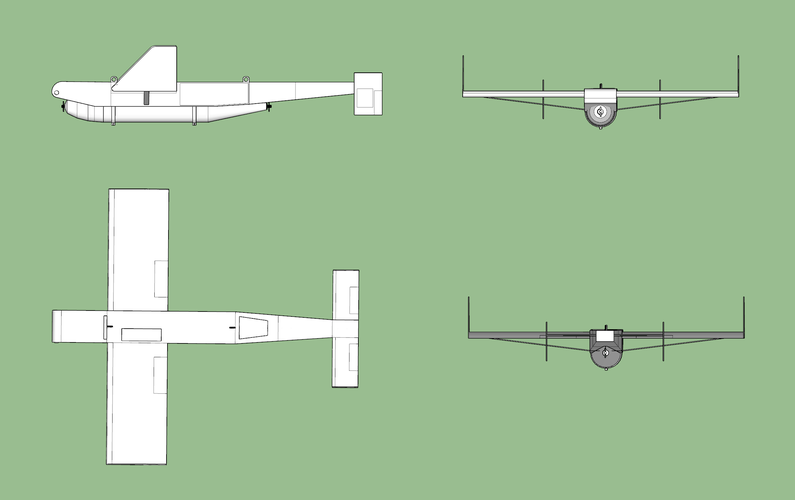 The “Fotobomba”’s guidance system was photo-contrasting one. It tracked the target based on the difference of light flow from the reflecting ocean surface, and target ship on it.

The main scanning element of the seeker was a scanning cylinder – horizontally placed drum with mirror surface inside. The outer skin of cylinder was opaque, with the exception of two transparent strips on the opposite sides, that allowed light to get in the cylinder. The cylinder rotated counter-clockwise, scanning in lines the sea surface in front of missile.

Inside, the cylinder was divided on left and right section. The mirror surface inside the cylinder reflected all incoming light on the sensitive selenium photocells, placed at left and right ends. Constantly rotating at roughly 300 rpm, the cylinder scanned the sea surface forward and below the missile 10 times per second. The transparent strips “sliced” the image into horizontal lines, each line corresponded with some position of the cylinder in the moment of scanning. The amount of light, received on each line, was scanned by photocells.

* For the azimuth guidance, the electric output of the left and right photocells was simply compared. If the missile was going straight on target, both photocells received similar light input, and gave the similar electric output. The total output voltage of the system was zero. But if missile deviated from course, one photocell (that have target in its field of view) started to receive less light, and the other (that have only water in its field of view now), started to receive more. The balance thus became shifted, and voltage – positive for left turn, negative for right turn – appeared.

The polarized relay closed accordingly to the voltage, affecting the course gyro. The missile started to turn in the direction of lesser output, until the balance was restored.

* The range guidance was more complicated. It was based not on the output itself, but on the sharp change in output, produced when the object, contrast to background (i.e. target) was scanned. When there was only the brightly lit ocean surface in front of transparent strip on the scanning cylinder, the photocells output was mostly constant. But when the contrasting object (i.e. target) appeared in front of transparent strip, the output experienced a quick and sharp change. Special logical circuit detected such change; the exact reaction depended on the position of the cylinder at the moment of scanning.

The main advantage of photo-contrasting guidance was its high sensitivity. The photocells could detect less than 0,5% of difference in light input. The main disadvantage was, that system was effective only in daylight, in good weather conditions, and only against targets, that reasonably contrasted from their background.

Missile servo system was pneumatic. Rudders, elevators and ailerons were driven by compressed air cylinders, fed from high-pressure tank. Valves were controlled by solenoids, powered by relays, linked with autopilot’s gyros. The rudder control was a simple “bang-bang” system, rudder moved from zero to max without intermediate positions, so the course was somewhat zigzagging. The elevator control system was proportional, i.e. the elevators deflection angle corresponded with the detected deviation from course. Thus rather precise range accuracy could be achieved. 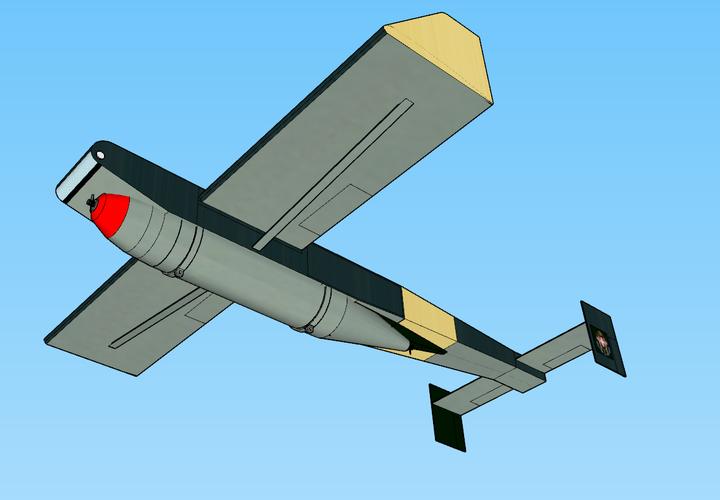 The payload consisted of a standard, G.P. 800-kg high-explosive bomb (the 630-kg bomb in the same casting could also be used instead), hung under the body of missile. There were two scenarios of hit possible: direct impact with immediate detonation, and missile falling short of target, with bomb detached for underwater hit.

If missile hit the water, the bomb broke away, and continued to move by inertia through the water. It was hoped, that underwater hit could be achieved. The bomb was fitted with Type A impact nose fuze (which reacted instantaneously if the bomb directly hit the target), and Type J time-delay tail fuze (which reacted with delay, if bomb hit the water). The time-delay fuze was installed to explode the bomb in water, hoping to cause underwater damage to enemy ship. The use of magnetic torpedo fuze – to explode the bomb directly beneath the enemy ship – was also suggested, but, apparently, not implemented.

“Fotobomba” was designed to be launched from the usual Italian torpedo carriers; Savoia-Marchetti SM.79, CANT Z.1007, and Piaggio P.108. A special launch trapeze was fit on torpedo hardpoints of the bomber, to lower the missile outside of bomber’s turbulence area just before launch. To acquire the target, a special periscope (with optical axis running parallel to the optical axis of missile seeker) was installed, which allowed bombardier to check the missile field of view, to make sure, that it get the right target.

After rushed development, prototypes of “Fotobomba” were ready by June 1944. First drop tests were conducted in Guidonia, with only gyroscopic autopilots installed. The first bomb with prototype seeker was launched August 8, 1944. To speed the development, prototypes were launched over lake, and parachute system, controlled by mechanical timer, was installed, so recovery of the missile was possible.

In September 1944, ten complete prototypes were ordered, two for laboratory testing, and eight for test drops. The drops of pre-production missiles were conducted against “San Marco” radio-controlled target ship in October 1944. Eight test “Fotobomba”’s with dummy warheads were launched against maneuvering ship in four pairs. The results were:

* 2 – get into near vertical dive almost immediately after launch; apparently equipment failure.

* 4 – bomb fell “reasonably close” to the target, to cause some damage if fitted with real warhead.

* 5 – direct hit into target ship, just in front of superstructure.

* 7 – held azimuth right, but overshoot target for more than 100 meters.

* 8 – seemingly lost the target after launch, but then re-acquired, and managed a close water drop.

While the results were satisfactory, it was also obvious, that weapon itself required much more development. However, Regia Aeronautica's high command ordered the new weapon being deployed on Indian Ocean as soon as technically possible. Forty units were ordered in four batches of ten each, but due to “Fotobomba” being still in development, only the last twenty missiles were actually of same type. 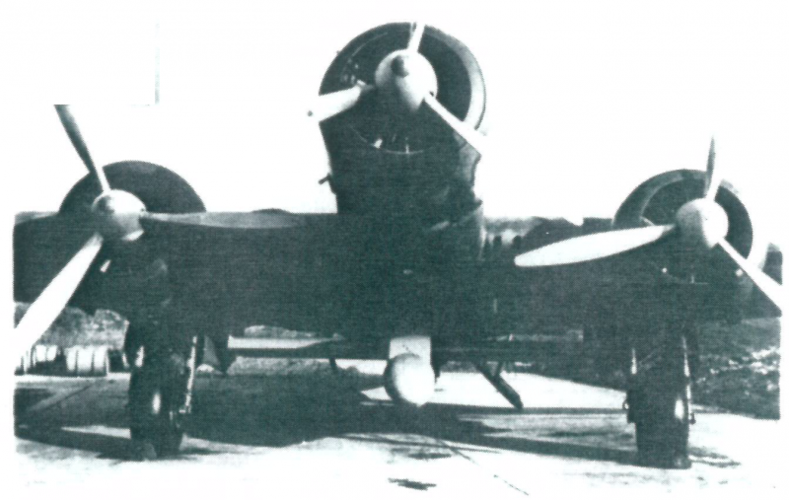 The first batch of nine missiles was delivered on Ceylon in March 1945. The weather conditions precluded their operational use, so new weapon was used only in test drops against Japanese wrecks on beaches of Sumatra.

The first attempt to use new weapon was conducted at 11 May 1945, against Japanese coastal shipping in Java Sea. Two SM.79 bombers, each with one “Fotobomba” were send to attack a small tanker near Semarang, but the visibility conditions were worse than average, and no missiles were launched.

At 14 May, the attempt was repeated. Two bombers were send to engage Japanese gunboat (mistakenly assumed as “small cruiser”) detected near Surabaya. Weather conditions were still far from optimal, but bombers managed to find the clean spot & release two missiles. One apparently lost the target immediately after launch, the second get the azimuth right, but overshoot the target.

Third mission, 15 May, was scrubbed due to bad weather.

Fourth mission, launched at 20 May, involved two Piaggio P.108 heavy bombers, equipped with two missiles each. The long-range raid was conducted against Makassar, and finally get a first success; the small Japanese coastal steamer was “practically blown off water” by a 800-kg bomb exploding beneath it. The other three bombs all missed.

Fifth mission, 24 May, was launched with delay, and when four SM.79 bombers arrived to the target, it was already evening. One bomber attempted the missile launch, but it was not successful due to lack of daylight.

Seventh mission, 18 June, involved two SM.79 bombers attacking targets of opportunity in Java Sea. One bomb was launched against unidentified submarine with unclear result. Another was send against Japanese tramp steamer, and missed the target.

Some missiles were also used against contrasting land targets, like bridges, river dams, or fuel tanks. But the efficiency was found to be greatly dissatisfactory. Specific, highly-favorable conditions were required for the seeker to track land-based target, and any distraction - like difference in foliage coloration – could confuse the seeker, throwing missile off course. Also, the payload was considered too small to achieve the satisfying results against most possible targets (like dams).

A total of 400 “Fotobomba” missiles were ordered before the end of the war, but only 120 were actually produced, and only 80 were send to the frontlines. Of them, 42 were dropped in combat. 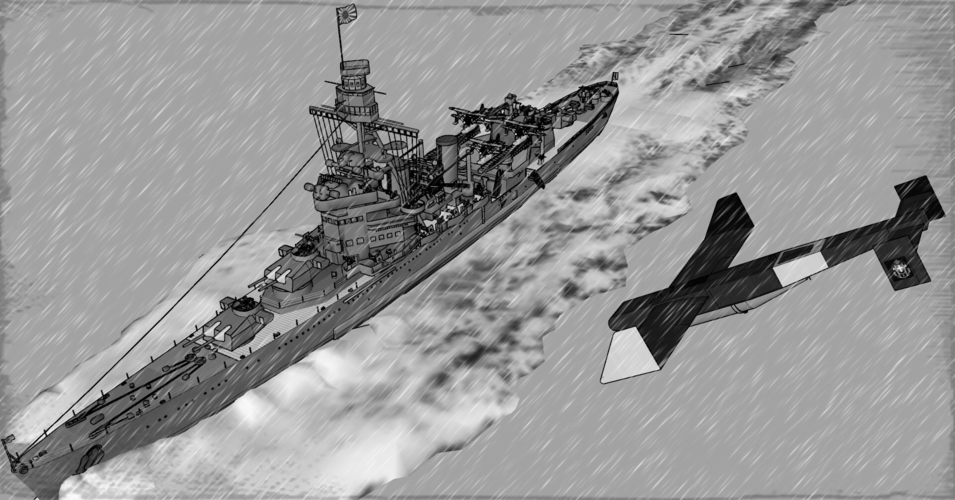 advanced concept for the time

kocovgoce said:
advanced concept for the time
Click to expand...