Imaginary airplanes from the "Blake and Mortimer" comic books

For those who may not know who Blake and Mortimer are (and unless you're European, I can't really blame you) they are two comic-book characters created by Belgian artist Edgar P. Jacobs, lifelong friend of Tintin creator Georges Rémi (Hergé) and uncredited contributor to some of the Tintin books, notably for the more challenging technical scenes (a role that would later befit Roger Leloup, designed of the Carreidas business aircraft).

Jacobs launched Blake and Mortimer in 1946. They were two independent British detectives ever on the trail of mysterious contraptions and mad scientists, most often in the form of their arch-enemy Olrik. The artwork is typical of the famed Belgian school's "ligne claire" style, which Hergé and Jacobs basically created. However, Jacobs's stories were more dense and jammed with long text balloons than Hergé's more universally-appealing Tintin.

In an article published in Air Magazine #27, J. C. Carbonel lists all the wonderful imaginary aircraft invented by Jacobs. Just like Hergé, Jacobs strived for authenticity by documenting his aircraft from press photos, although he indulged in a little more fantasy. Alongside real-life types that appear here and there, the books contain quite a few imaginary types or imaginary variants of real-life types. Here is a set of them:
These aircraft are presented here in model form (models which were made by Carbonel himself).
Given the so typically British flavor of the series and the high quality therein, it is surprising that the books never became popular in England. Was that due to the Belgian publisher's lack of ambition for overseas expansion, or the classic British disdain for anything not made in Britain? I could not say...
Anyway, enjoy these models, and if you like them I'll post more about Jacobs's aircraft!

Those aircraft are all from Blake and Mortimer first Adventure "The Secret of the Swordfish"
First Part was publish in September 1946, then overwork in 1950, with second part publish in 1953.
is a milestone of the Franco-Belgian comics comic art 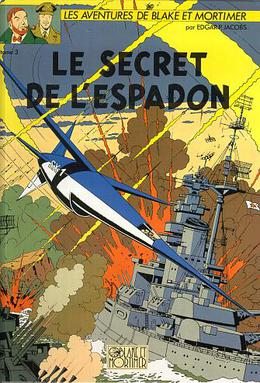 Indeed Michel! A national treasure for you of course...

I much prefer the charm of the original covers as opposed to the exceedingly bright colors of the reprints.

Here is a series of covers: the original covers to Volumes 1 and 2 of Le Secret de l'Espadon (Secret of the Swordfish) and some of the B & M covers of Tintin Magazine which featured the aircraft mentioned above:

I think Carbonel prefered to base his models upon the revised 1950 version of the book with more accurate drawings. The Golden Rocket looked much better and more realistic in that version. But I suppose others must have attempted to build the original version... And if not, why not you, Michel?
L

Being a lifelong (allmost) devoté to the work of Edgar P. Jacobs I read in
a publication about the life and times of the great man that he made some of the
aircraft models by himself to draw them as realistic as possible..

A few months ago I obtained a model of the Swordfish made available
by 2010 Editions Blake&Mortimer at a very reasonable price.
If you guys are the lucky owners of some original TinTin covers or B&M strips
keep them secured because the have a high value now.

Wouldn't the publishing dates predate Regulus II by quite a few years?
S

I remember building paper models of the Espadon - not that difficult to build.
A pair of elongated paper cones to make the fuselage, cut wings and fins into cardboard, cut a squarred hole into the forward cone with a bit of plastic to make the cockpit windows, and voila...
S

Glad to see there DOES exist an English-language edition to the series...

Any interest in model kits from this series?

As I understand it, the ones that exist are out of production. But, perhaps with a sufficient group order, that could change.

I think the Sharkit 1/72 model of the Swordfish (Spearfish) is still available.
M

Renaud still lists it on his Sharkit site but it is out of production for now. Perhaps if enough people bug him about it, that might change things.

Or, more effectively, if enough band together with cash in hand, it might move that kit up in his production que.

Any interest in that here gents?


some of them you can find on Ebay or Catawiki
http://www.ebay.com/itm/CAR-VOITURE-BLAKE-ET-MORTIMER-n-1-LEspadon-SX-1-1-43-COMICS-cars-tintin-/350692110327
http://www.catawiki.com/catalog/model-cars-miniature-cars/makes-manufacturers/hachette/2046225-l-espadon-sx-1
M

Ah, I was wondering where those came from. I'd seen pictures of them previously but nothing about their origins. Glad that some companies see there being a market for such creations. Unfortunately, they are not to any scale and are certainly not accurate in proportions to the craft as depicted in the tales.

So, until Renaud renovates his moulds, it would appear that scratch building a SX-01 is the only option. Or, finding one on eBay!

In the latest "Blake and Mortimer" comic book, called "La bâton de Plutarque" / "Plutarch's Staff ", there are more pictures of the Golden Rocket and other fictional aircraft.
The Golden Rocket is developed from a single piloted jet fighter to larger bomber with 2 pilots on-board at the secret base Scafell in north west England (IMHO Lake District National Park, near mountain Scafell Pike). The base is in a closed valley hidden under artificial clouds / fog.
The only non-fictional aircraft is the Horten Ho 229 / Horten H.IX .
Attached pictures found via Google search.