Source:
The Ships That Never Were, a Collection of Cancelled Naval Projects 1918-1922 by Peter A Marshall

Do you have a source for "The Ships that never were"? I haven't been able to locate it on Amazon. It sure sounds interesting.

Flying Sorcerer said:
Do you have a source for "The Ships that never were"? I haven't been able to locate it on Amazon. It sure sounds interesting.
Click to expand...

I have been looking for the book as well without success. The drawings came from scans of Warships International No. 1, 1999 which cite The Ships That Never Were, a Collection of Cancelled Naval Projects 1918-1922 by Peter A Marshall as the original source.

You know I could make a pretty cool painting of those two images if I had a high res copy of them and some reference as to the details needed.

I've updating my drawings of this class and in the near future (In a few weeks) I will post them here with more accurate and up to date data as you usually find on the net (For exampel their armament was (for the 46cm armed versions) 46cm/50 cannons (not /45 ones), 14cm/50 Guns and only 4x 12cm/45 AA guns)

I'm a bit doubtful that this ship would have ended up at "only" 47,500 tons standard loading, especially if it was planned to use 50 caliber length guns.

An extensive integral armor scheme might possibly explain some of the planned weight savings.

The most accurate data comes from these official sources in the Hiraga archive:

Alternative layouts for C and D:

We really need a thumbs up emote or similar.

Here is Design A of the No.13 preliminary series, It is basically an up-armoured Kii with 305mm belt of 15 degrees inclination rather 292mm of 12 degrees. Speed is basically the same but the extra armour and the engine to propell it meant an extra 5.000tons of displacement.

IJN No.13 Class Preliminary Design A by Tzoli on DeviantArt

Design B was the first step towards something different something new, Triple turrets but placed in Kongo style layout being turbine rooms separated by the 3rd turret.

IJN No.13 Class Preliminary Design B by Tzoli on DeviantArt

IJN No.13 Class Preliminary Design C by Tzoli on DeviantArt

Which names of these ships were proposed ? Any suggestions ?

No that is why they are called Number 13 class as the last 4 of the 8-8 fleet after the two Nagatos, two Tosa/Kagas, four Kiis and four Amagis.
But my idea for them based on if they were considered as Battleship (Province names):
IJN Tajima IJN Bingo IJN Hitachi IJN Chikugo

Tzoli said:
No that is why they are called Number 13 class as the last 4 of the 8-8 fleet after the two Nagatos, two Tosa/Kagas, four Kiis and four Amagis.
But my idea for them based on if they were considered as Battleship (Province names):
IJN Tajima IJN Bingo IJN Hitachi IJN Chikugo

Nice suggestion , i have seen the reference and probably could had been names like first suggestions : they were super-battleships based on Tosa .

Not precisely. Kaga/Tosa was started as an improved Nagato in 1918/19 a modified Tosa was designed with base characteristics of the Kii, Amagi too based on Kaga and BC version of Nagato, then No.13 was begun as an improved Kii.
And Nagsto likely was based on a Vickers export design for Japan (4x2 16")

Like Design C, Design D too had two variants, the alternative showing a different placement of the 3rd and 4th version. Otherwise this proposal was similar to the Fuso and Ise classes some 10 years prior.

IJN No.13 Class Preliminary Design D by Tzoli on DeviantArt

The BC were named for temples as apposed to just big mountains.

Top of the list for BC would be:
Aoba, Kinugasa, Myōkō, Nachi, Ashigara, Haguro, Chōkai or Maya. Furutaka and Kako were rivers as per cruiser naming conventions.

These ships would nominally be replacement for the turn of the century 1st generation Armoured Cruisers so these could be reused:
Asama, Tokiwa, Yakumo, Azuma, Izumo, Iwate

Under the law No13 were BC so the above are more likely but if Battleships, they tended to be coastal provinces:

Standout ones are Yamato, Musashi and Shinano (Owari, Kii, Suruga and Omi were the Kii Class (No.9, 10, 11 and 12) but as an 8-8 replacement and convincing the population that these ships are ncesessary upgrades then names from the pre-dreadnoughts would be likely: Iwami, Hizen, Sagami, Suwo, Tango, Asahi, Shikishima, Fuji.

The Japanese never reused names from ships that were lost so Yashima, Hatsuse and Kawachi will be off the lists.

Furutaka and Kako were started as light cruisers so river names are appropiate.

And no, the Battlecruiser namesakes were Mountains as evident with the Kongo and Amagi classes and listed in every sources.
Also your logic of coastal provinces do not stand as 95+% of Japan's provinces are coastal so statistically it is very likely a new battleship gets a coastal province name.
Yet Japan had IJN Yamashiro, IJN Shinano, IJN Kawachi, IJN Yamato (I know it is the old name of Japan but still an inland province)

As for re-using names, the IJN did not built enough capital ships to gotten with the issue of re using older names.
Last edited: Sep 14, 2020
D

On April 23, 1895, the then Minister of the Navy, Yamamoto Gonbei, wrote and sent to the Emperor a proposed system for naming IJN ships.

After some refinements, involving such details such as how long after a ship is stricken is its name usable for a new ship, the guidelines that would basically remain intact until the demise of the IJN were established.

Significance in Japanese religion
Folk religion has continued throughout the ages to be a very major force in the life of the Japanese people, particularly the aspect of the association between religious beliefs and practices with sacred mountains. This practice of mountain worship holds a significant place in Japanese beliefs and had become widespread throughout Japan’s history. It has been observed that nearly every high mountain top has had its own dedicated shrine at one point, with some receiving pilgrimages every year from thousands of worshippers. This collection of diverse phenomena linking religious activities and beliefs with sacred mountains is referred to as sangaku shinkō. 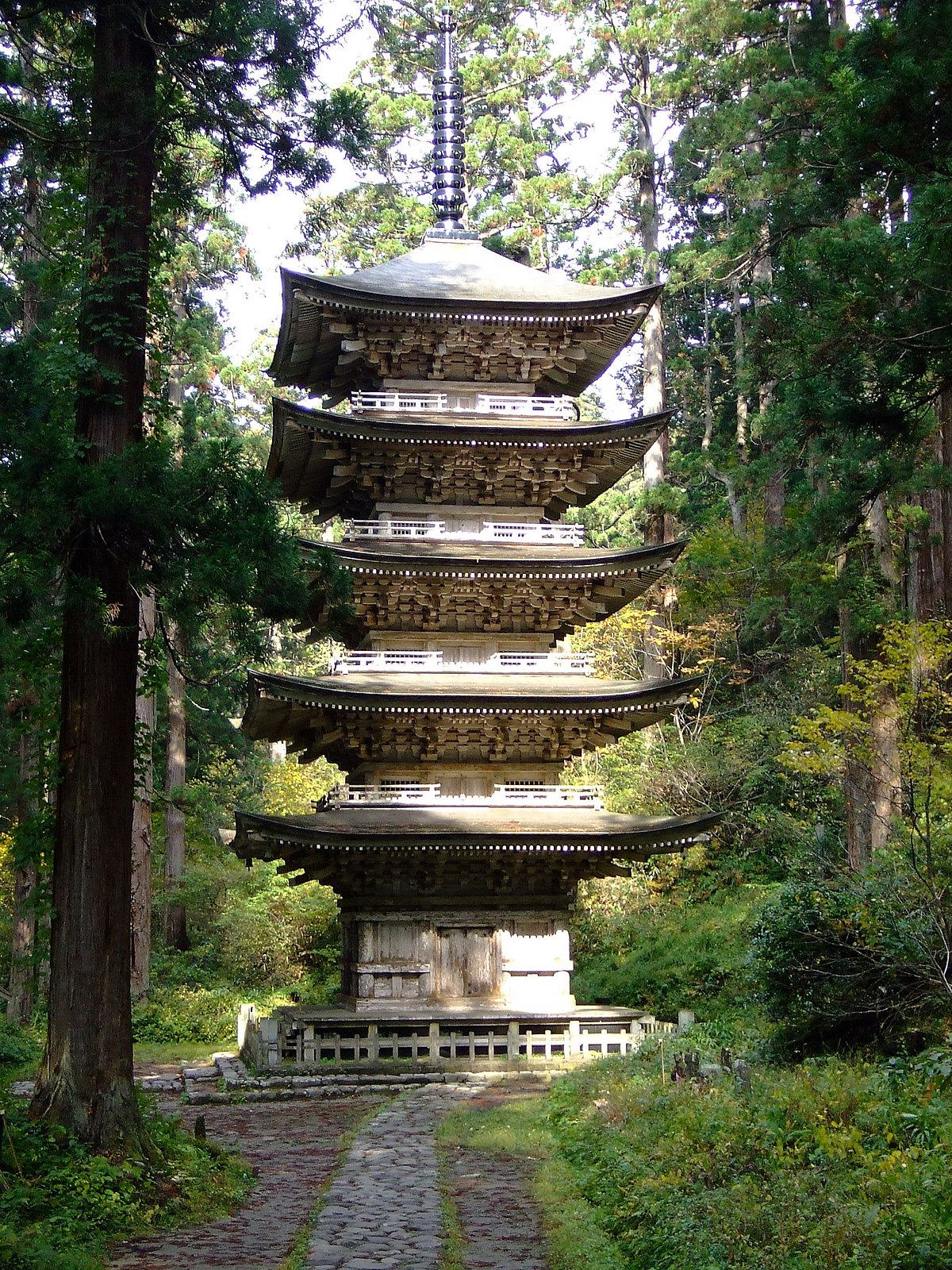 This still not apply as Battlecruisers and heavy cruisers were named after mountains not shrines, light cruisers after rivers and so on:
I know Japanese people has deep connection to mountains and other natural things.

The system used through the end of World War 2 is as follows.

From the Japanese Wiki of the Kongo class:
命名の由来
この頃の日本艦船の命名慣例によれば戦艦には旧国名が名付けられているが、本級はまず装甲巡洋艦（一等巡洋艦）として計画されたことから、同型艦全て山岳名が名付けられている。

Origin of the name
According to the naming convention of Japanese ships around this time, the old country name was given to the battleship, but since this class was first planned as an armored cruiser (first-class cruiser), all ships of the same type are named mountain names.

And the goes for each ship.
Yes mountains with more spritualistic value or history preferred over others but the ships still not named after Shrines. Every source agrees on mountains even Japanese ones.

Next is the E design introducing the quadruple turret into the IJN:

IJN No.13 Class Preliminary Design E by Tzoli on DeviantArt

Continue with Version F where the forward quadruple turret got replaced by two twins increasing the survivability of the forward armaments:

IJN No.13 Class Preliminary Design F by Tzoli on DeviantArt

Design G is a different approach with the aftermost turret got replaced by two twins but also a firepower increase was in order by a twin turret forward to 14 barrels:

IJN No.13 Class Preliminary Design G by Tzoli on DeviantArt

Next is Design H another 14 gunned variant but in only 4 turrets: 3 quadruple and one twin, basically an added twin version of E:

IJN No.13 Class Preliminary Design H by Tzoli on DeviantArt

And now the last of the 41cm armed versions and the ultimate such armed designs the I and J with 4 quadruple turrets!

IJN No.13 Class Preliminary Design I/J by Tzoli on DeviantArt

And finally the 46cm armed versions begun with Design K. The official hiraga archive sketches shows that the Breyer stlye drawing of this class showing Nagato style arrangement and single funnels was wrong, but when Breyer collected his data he might not had access to the complete archive.
I've also made a slightly modified version with Y shaped funnel and impred AA guns (4x2 rather 4x1 12cm and added an extra pair of twin 40mm Vickers AA guns)

IJN No.13 Class Preliminary Design K by Tzoli on DeviantArt

fantastic work as always. To go off topic how long does one of these take to draw up?

From nothing many hours/days, but if I only had to modifey an existing drawing only a few hours

Design L is the next step mounting 10 46cm cannons in 5 twin turrets:

IJN No.13 Class Preliminary Design L by Tzoli on DeviantArt

IJN No.13 Class Preliminary Design M by Tzoli on DeviantArt

And the last of the known No.13 preliminary designs, variant N which only a very small sketch about the number of turrets exists:

IJN No.13 Class Preliminary Design N by Tzoli on DeviantArt