I recently acquired this wind tunnel model. From previous models I have seen in person and had in my collection, it appears to be from NACA Langley. I believe it is an aircraft design from the mid to late ‘30s. The bottom of the base is marked 825. If anyone has any information on what model this is, it would be greatly appreciated. Once identified we can move it to the proper aircraft thread. 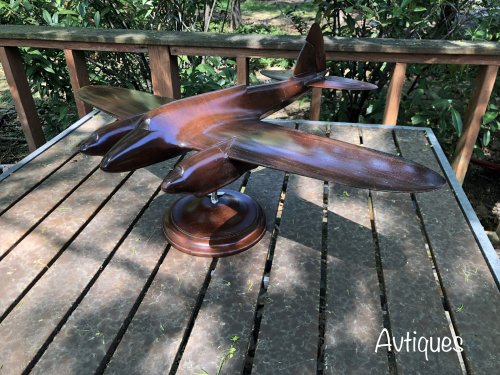 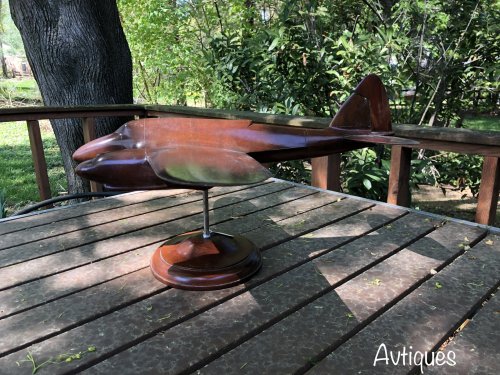 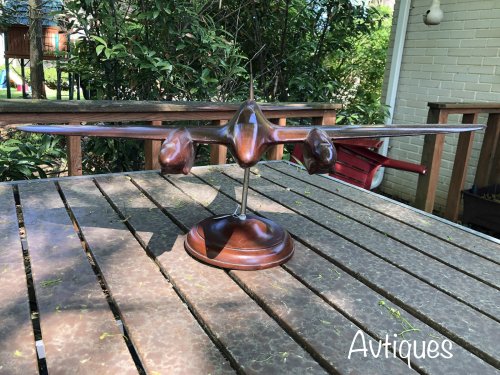 Wow--gotta say, that's really handsome. It does not look American! Is there a chance you could share a plan (top) view?

Inverted V engines has to be clue. Have to have a think about this one
S

CAIR67, thanks for sharing!

I would say that the extended wing fairing/blending is very much a late 1930s style. Strong similarities with the Supermarine Type 313 project from early 1936, for example
S

Schneiderman said:
I would say that the extended wing fairing/blending is very much a late 1930s style. Strong similarities with the Supermarine Type 313 project from early 1936, for example
Click to expand...

Curiously, this feature has been popular in the projects, not in actually built aircraft. Perhaps, XP-67 and FH-1 Phantom incoporates it.
Anyway, we need another suggestions for this model.

The key has to be the engines. late 1930s/early 1940s inverted V engines, presumably water-cooled, with down-draught intakes are far from common. D-B appears unlikely, H-S possible, I guess. But what other options were there, especially for US projects, if this is indeed a US design?
(Yes I know I'm rather concentrating at the early end of the possible date for this project so had discounted the Continental XIV-1430 - at least for now)
Last edited: May 22, 2019
E

I'm going to say a British 1940s era project. The elliptical wing ends and sophisticated, blended short body puts it out of the 1930s. Merlin engines?

There is a British feel, epecially around the tail feathers, and mild blended designs had begun to appear from around 1936. However I still believe that the front view shows the engines to be inverted V, so not Merlins.
E

I will add that the size and shape indicate a very fast aircraft. The vertical tail reminds me of the Me 262.
K

A question; why would Langley have wind tunnel models of British aircraft ?

Very unlikely that they would, so what is it about this model that led CAIR67 to believe that it was from Langley? Not saying that it isn't, just curious to know what features are distinctive for that establishment rather than any other

If you look at the pictures, particularly the second, side, view, you will see that the rudder and elevators are separate parts.
Now look at that rudder shape . . . pure Airspeed . . .
However, Looking at the Putnam's 'Airspeed', there doesn't appear to be a design that matches this model. Over to you guys . . .

Wind tunnel time was getting harder and harder to get. Also, a desire for secrecy existed.
E

There is an opening at the top centerline located just above the back end of the wing root.

I think its an air cooled inverted v-12.
E

sienar said:
I think its an air cooled inverted v-12.
Click to expand...

Identifying these models is a tricky task!
In many ways it does look British in style (very reminiscent of a Beaufighter in many respects), but of course general style only takes us so far (and still in 'hunch' territory).
If it is American, then its possible the engines are standard Allison V-1710s (judging my the upper carburettor intake) with some form of modified exhaust system along the bottom of the nacelle, perhaps to reduce drag? Comparing with the P-38, I don't think the width and cross section of the nacelles necessarily precludes a normal V-12.

Tricky indeed.
It was no trivial matter to make a model of this quality for evaluation at Langley, or indeed the British equivilent at RAE or NPL, and the cost was not insignificant either. That means it is not very likely to have been a purely speculative project, much more likely to have been related to an official requirement or at the very least encouraged by potential customers. I'm not too familiar with US developements in the late 1930s but certainly in Britain there was growing interest in potential high-speed, unarmed or lightly armed, reconnaisance aircraft or bombers. No doubt there were parallel studies in the US.
The nacelles are barely wider than the spinners which makes me doubtful that an conventional V-12 would fit. If CAIR67 could post some additional images from above and below it would be most useful.

So...might it be Canadian? Fairchild-Avro were building the underwhelming Bolingbroke, really just a Blenheim IV. Could this be a projected successor?
Come at me bro.

I agree with robunos that this looks like an Airspeed design. The tail is very much like the one on the Airspeed Oxford, The thing on the mid-upper fuselage might be a fairing over a dorsal gun position. Engine nacelles look like a mix of Allison and Ranger installations - very puzzling.
S

Let's approach problem from other side: has it common practice, that foreign aircraft' models have been tested in NACA (or other USA) wind tunnels in prewar period or during the WW2?
NASA demonstrates (somewhere on their historical site) the broad range of tested models, with their designations and test's dates. I wonder, if this "twin" mentioned among them.
E

Silencer1 said:
Let's approach problem from other side: has it common practice, that foreign aircraft' models have been tested in NACA (or other USA) wind tunnels in prewar period or during the WW2?
NASA demonstrates (somewhere on their historical site) the broad range of tested models, with their designations and test's dates. I wonder, if this "twin" mentioned among them.
Click to expand...

No it was not common practice, in fact quite unusual. If it is indeed a Langley model, and we do need to know how likely this is, then a US project is far more plausible. However, as many of the posts say, there are several features of the model that appear more typical of British design than US. We really do need CAIR67 to come back and tell us a little more, preferably with additional photographs, to help us narrow down the options.

Wings and tailplane reminds me the early Ki-45. But then what would it do in the US... could it be a study of an hypothetic enemy aircraft ? like NASA studied some Tu-22 models?
The fin looks Airspeed or Bristol (less).
And the engines, on the front view, looks like BDs in italian fairings with two radiators on each side, and oil radiator on top.
Makes a nice mix, but difficult to identify.
A

It reminds me of a beefier, up-graded Curtis A-18. Curtiss was certainly notorious for trying to get all the "stretch" they could out of any design.

If it is American, it appears to be something from Convair.

edwest said:
If it is American, it appears to be something from Convair.
Click to expand...

I am just thinking a random thought here but... could this not be a specific project at all? If one were an aeronautical engineer/designer and experimenting with things like blended fuselage and wing, would one create a wind tunnel model to try out those ideas without any particular project in mind? Or would that cost too much money without a contract for a specific plane?

NACA published a succession of reports on wing-fuselage interference for a wide variety of fillets and blends, some translation of German studies, from 1928 right through the 1930s. There would be little to be gained from an evaluation of this model specifically for that feature.
A

That tail, those engines are too specific just for some research about blended wings.
It looks British-y to me. Tail looks like blend of Airspeed and Bristol shapes. Too bad the wing shape isn't visible.
A

After a certain amount of consideration, the model looks - to me, at least - as being a possible Curtiss follow-on to the A-18. Curtiss was notorious for trying to get every inch of "stretch" from its designs as possible, and this looks like it may have been one example.

edwest said:
If it is American, it appears to be something from Convair.
Click to expand...

I was going over Convair Advanced Designs by Robert E. Bradley and found enough commonality to post the thought. It covers the period 1923 to 1962. The author states that the documents he found "represent only a fraction of the Company's technical history." Rather than a trials model, I will suggest that this was a made to a requirement model. That requirement disappearing due to another development outside the company.
S

Many participants of this discussion (I'm as well) offers their opinion, about the similarity of model's certain details to the well-known real aircraft or projects.
There have been many similarities in the shape of fin, fuselage-wing blend, wing planform etc.
However, what if this model are completely new for company, that build it and send to windtunnel?
Could someone in the late-1930s, after seeing P-38' model conclude, that's this is Lockheed proposal?
Or Grumman F5F, or DH-100 Vampire?
So, we could try all ideas to search the producer of model, but don't forget, that it could be completely new design.

P.S. The shape and relatively large size of foward cockpit windshield allows me to think, that this has't been large aircraft, with crew of two, no more.

The tail has a similar 'look' to the Fleet Fort. A Canadian design might be tested at the NACA and this would explain why it doesnt match up with anything known from a US maker. Plus Fleet presumably had a Model 70 design that is completely unknown. 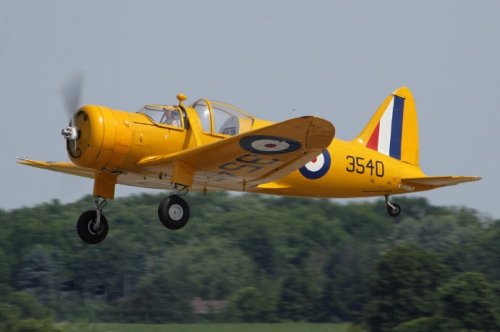 Considering the length of the wings in relation to the apparent size of the fuselage, I suggest a high-speed, relatively high-altitude reconnaissance aircraft. The lift/drag ratio would have been very good.

sienar said:
The tail has a similar 'look' to the Fleet Fort. A Canadian design might be tested at the NACA and this would explain why it doesnt match up with anything known from a US maker. Plus Fleet presumably had a Model 70 design that is completely unknown.
Click to expand...