Maybe someone can translate this page ?
http://1.2.3.13/bmi/pk510.akazunoma.com/gtdd3.p21.500.jpg
Someone knows more about the double barreled tank from Ingenieurbüro IBP Pietzsch ?
This tank is also on the cover of
Rolf Hilmes Kampfpanzer heute und morgen: Konzepte Systeme Technologien

It seems that many firms submitted designs for the double barreled tank Kampfpanzer 3.

Abraham Gubler said:
[...]
This was a new turret designed by Wegmann in 1978 that reduced turret height by 30% that was to be combined with the Euro Pak engine which cut the hull length by a road wheel (1m). These volume reductions enabled a new mark of Leopard 2 to be built with much increased armour thickness but staying under 60 tonnes combat weight. Main gun depression to -10 degrees was to be allowed by a rising flap on the turret roof.
Source: Battle Tanks for the Bundeswehr: Modern German Tank Development, 1956-2000 by Rolf Hilmes, ARMOR — January-February 2001
Click to expand...

Abraham Gubler said:
[...]
This was a new turret designed by Wegmann in 1978 that reduced turret height by 30% that was to be combined with the Euro Pak engine which cut the hull length by a road wheel (1m). These volume reductions enabled a new mark of Leopard 2 to be built with much increased armour thickness but staying under 60 tonnes combat weight. Main gun depression to -10 degrees was to be allowed by a rising flap on the turret roof.
Source: Battle Tanks for the Bundeswehr: Modern German Tank Development, 1956-2000 by Rolf Hilmes, ARMOR — January-February 2001
Click to expand...

Here is a nice image of the model of the MaK VT2 from before it was made in the flesh.

OK, not doubting someone came up with a project like this but, why? What is the supposed advantage of the design? I can see the problems easily enough having crewed Chieftain myself and cannot see this working as a practical tool.

There's a good explanation for the reasons for this concept in this post rfrom moin1900, unfortuantely in German only
http://www.modellversium.de/galerie/22-militaer-fahrzeuge/12255-gefechtsversuchstraeger-gvt-04-eigenbau.html

Short summary:
Faced with the tremendous numbers of warsaw pact tanks, a higher firepower and a better first-shot-kill probability were highly desirable.
New ways for target aquisition and fire control allowed for shooting in motion for such tank designs, too, and principally eliminated the
drawbacks of casemate tanks, which on the other hand could carry two guns, instead of just one for turreted tanks.
Those casemate tanks (which had nothing to do with the successor to the Leopard 2) were meant as experimental vehicles only and
not as prototypes for a service version

Talk about this unknown DRK panzer. 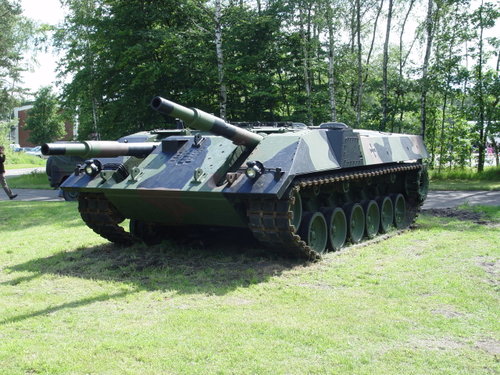 Obviously this tank is different from any known DRK panzer, ie. VT series and GVT series. 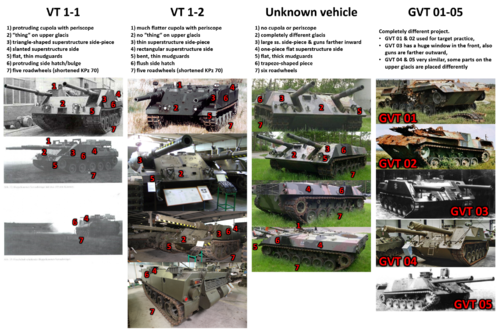 Twin large caliber gun, and you can see rifles in muzzles. 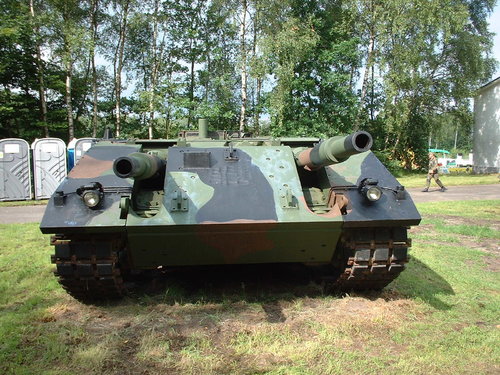 These guns could be dummy barrel, for the lifting rings welded on the barrels. There seems to have some sort of gun breech or elevating system behind, because the guns could be elevated and well balanced. 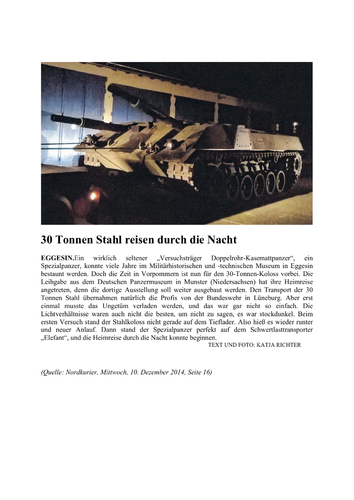 Some interesting data board shows that this is a GVT-05, which is greatly differed from what it originally looks like. 30 tonnes is direct copied from GVT-05. 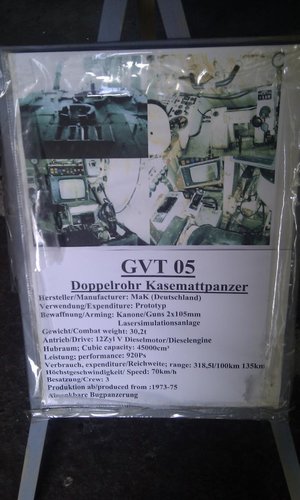 The last words of this data board : Absenkbare Bugpanzerung
Using Google translate it seems to be some adjustable hull armor.
Is this vehicle a modified version of GVT 05? Just cut off the original engine room and lengthened the hull to accommodate a more powerful powerpack, like 3200hp or so?

Could it be GTV-04 with an additional applique armored shell? (Possibly spaced armor?) The area around the barrels seems to show an extra thickness like a second glacis plate.

Okay, one thing I might be able to shed some light on: the GVTs were never fitted with actual guns, hence why in those photos the barrels are just straight tubes. They used gunfire simulators and laser practice weapons - I'm assuming basically tank-sized MILES gear. Rifled barrels would suggest this oddity has the pair of the standard 105mm Royal Ordnance L7s. The six road wheels is what's really throwing me, six road wheels and that general shape is making me think some kind of very weird modified Marder.

Some searching turned up this page that suggests it's one of the GVT series with the commander's dome thing missing, and it's owned by the Militärgeschichtlichen Sammlung "Lippische Rose" in Augustdorf, which seems to be a legitimate museum with contact info listed.


TomS said:
Could it be GTV-04 with an additional applique armored shell? (Possibly spaced armor?) The area around the barrels seems to show an extra thickness like a second glacis plate.
Click to expand...

I don't think so. Side profile is totally different from the GVT-04, and the mystery vehicle has an extra road wheel. 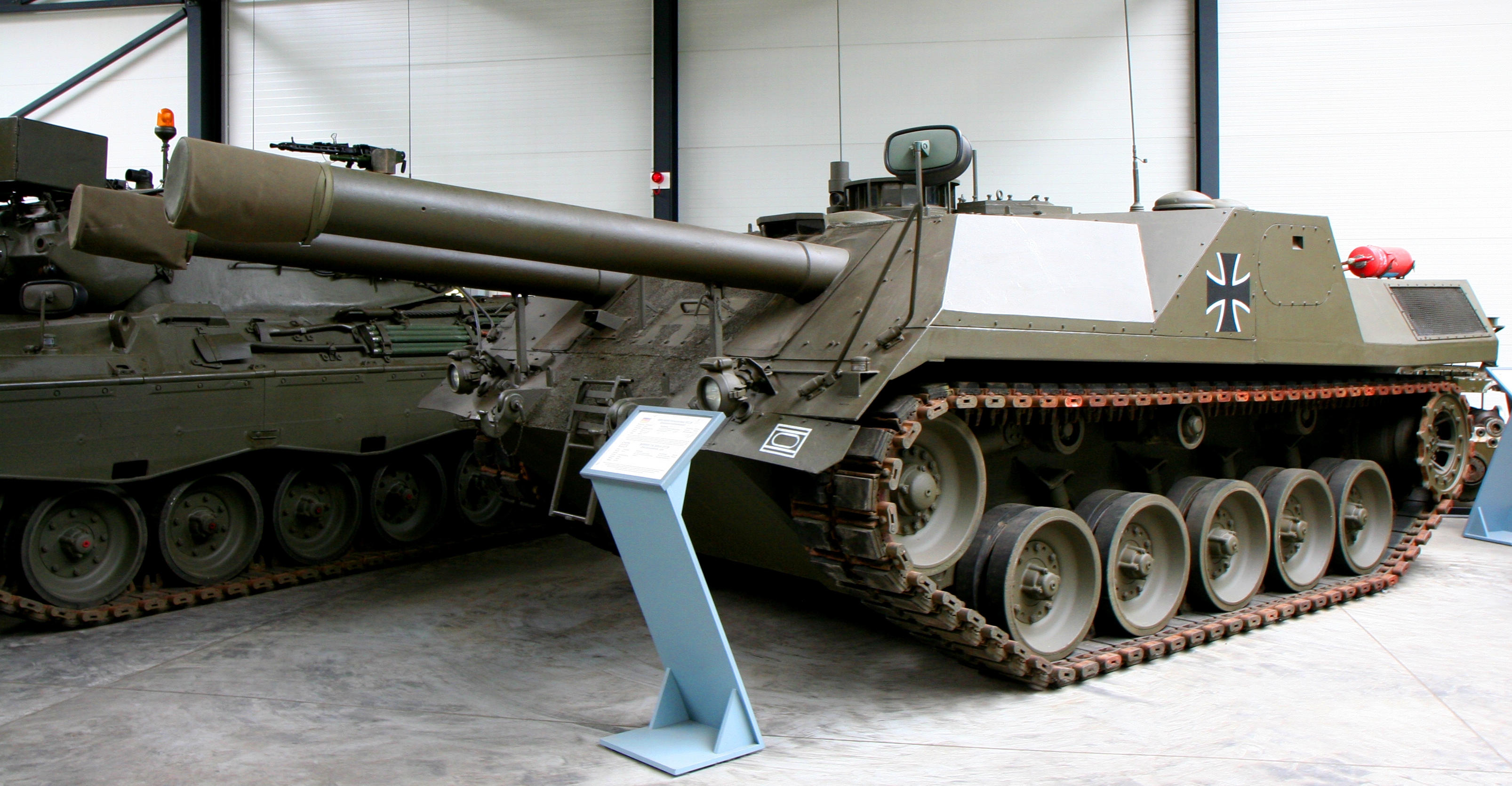 This is really strange, very strange. This mysterious vehicle with six roadwheels definitely did stand at Augustdorf collection and there was very little info about it, even its true name was not known, usually it was called Kampfpanzer 3 or sometimes VT 2 (Versuchsträger 2). Now it seems that later, it was moved to Eggesin museum and described as GVT 05 there, but I am quite sure that it was NOT its true name or origin, since (as noted above), the GVT-series vehicles were fitted with laser simulators only, not real guns, while this very vehicle definitely does have two real 105mm cannons. Also, all GVT-series vehicles did have five roadwheels. The article says the mystery vehicle was moved back to Munster (since it was leased from there), but AFAIK it is not located there, or at least not in public exposition (there is GVT 04 in Munster, as seen above). Where is that damn thing now? And what is it?
H 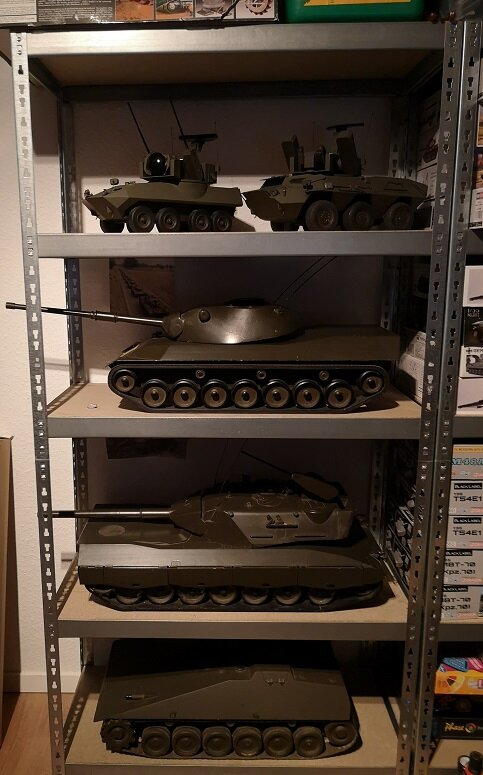 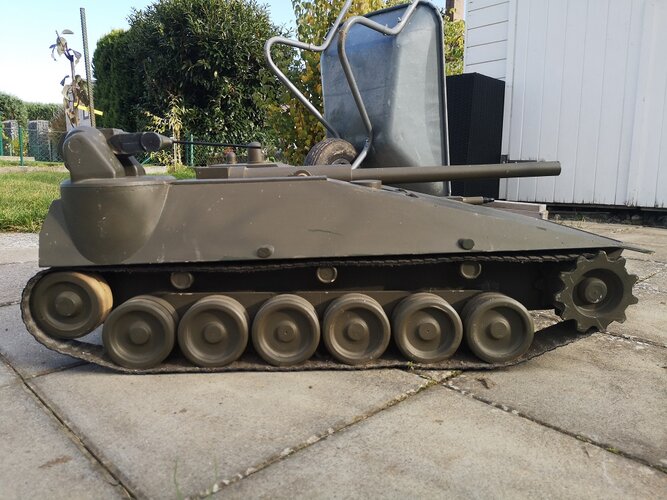 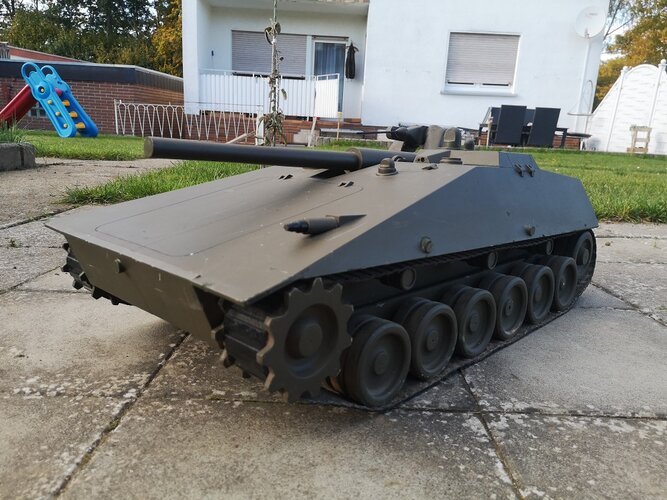 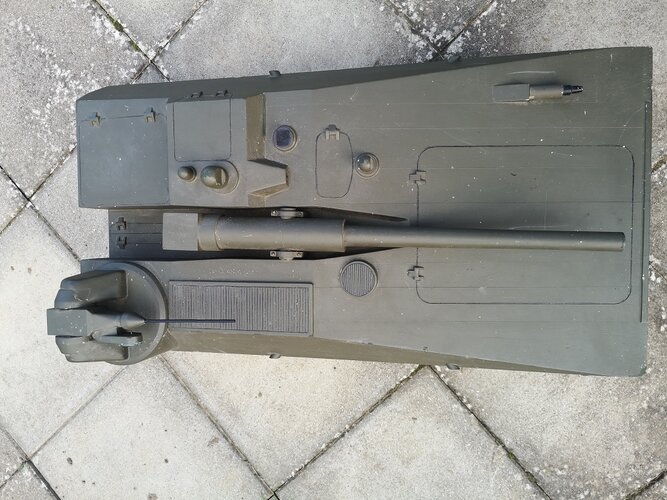 In my collection there are, among others, Leopard 1 prototype of the pre-series, Leopard 2 prototype with 20mm gun and the PT11 Turret, two wheeled armored vehicles of the family of the Wildcat air defense system and an unknown tank destroyer that I once showed here!

Greetings from Frielendorf in Germany

It must be nice to have all those models (and the space to accommodate them).
Do you have any more information about the tank destroyer which is so similar in concept to the Swedish S-tank Strv-103?

Some new foundings this year. 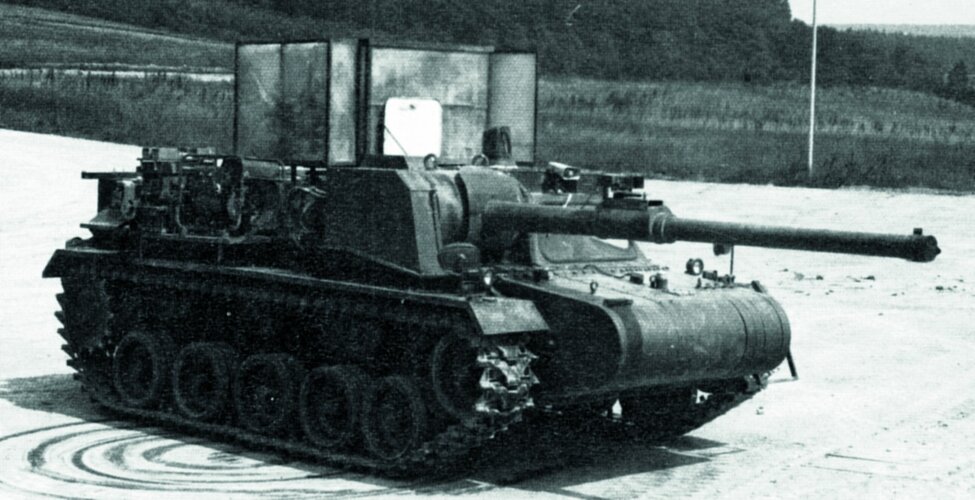 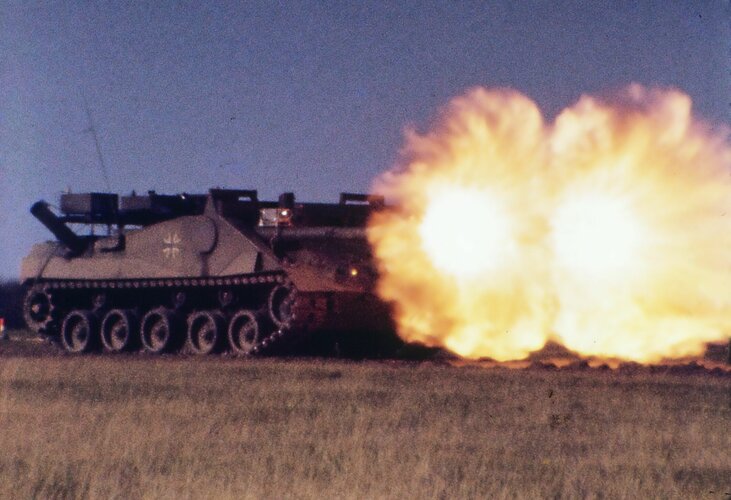 VT 1-1 firing both cannon in salvo.

Wow, where do you find these treasures, Hannesjo? They are truly amazing!
H

Thanks for the positive feedback, 80 models will follow! other unknown prototype models, by chance I got to know the builder of these industrial models who is now 80 years old. His descendants are not interested in the models, so this nice man has contacted me! But it will take a while until I get this .. I'm excited myself because I don't know what to expect!
H

Sorry for my bad english i use the google translator! Greetings from Frielendorf North Hesse. Germany here is a link for all Leopard 1 Lovers https://www.youtube.com/user/Schlampi01
N

Hannesjo, if you’re looking for a good home for any of these, I’m interested in purchasing one of these unique models!
H

Hey thanks for the positive feedback! Yes, I am somehow cursed that I keep stumbling on these models, I feel as if I have to take care of these foundlings and therefore cannot say no. To what extent the statements concern the number of models that are still to come, I am curious myself. But to you like-minded people in advance you are the first to get all possible information and the historical background. I am really happy to have a very large piece of German tank history with me, to show it and to share it with everyone - Greetings from Frielendorf - North Hesse - Germany - Johannes
Share:
Facebook Twitter Reddit Pinterest Tumblr WhatsApp Email Share Link