Is that related to a development project of G50 with liquid-cooled engine?
If yes I've, in my database, a shot of G50V that I enclose.
Perhaps it could be useful....

http://www.aerei-italiani.net/SchedeT/aereog50v.html
about Fiat G.51 i know there was two projects :
"G.51 (progetto)

Is that related to a development project of G50 with liquid-cooled engine?
If yes I've, in my database, a shot of G50V that I enclose.
Perhaps it could be useful....
Click to expand...

Actually, I have a drawing from Guidonia depicting a double-fuselage aircraft, with something in common to the G-50 but very different engine installation (more like the Re-2000). Unfortunately, no date. I'll try to draw something postable. The official FIAT-provided list of Gabrielli's designs (included in his autobiography, too) reports a G-51bis as a two-engine, two-site fighter. Engines A.74s.

Skybolt said:
The official FIAT-provided list of Gabrielli's designs (included in his autobiography, too) reports a G-51bis as a two-engine, two-site fighter. Engines A.74s.
Click to expand...

That's the opinion of Nico (Sgarlato), but I think it was something different. Stay tuned, someone is about to start working on it ...

Skybolt said:
That's the opinion of Nico (Sgarlato), but I think it was something different. Stay tuned, someone is about to start working on it ...
Click to expand...

I'm eagerly wait for these new infos...thanks in advance Skybolt!!

A-ah, you thought I forgot this, eh ? Wrong !
Since the original drawing I found in Rome is rather faded and would need a too high-resolution for being visible, I show two possible reconstructions done by no less than my friend Jemiba. As you will see the uncertainities are all regarding the right fuselage. The tunnel model drawing shows a circular artifact more aft than the cockpit on the left, that we decided to understand as the site for the second crew member, the gunner. From the Regia's tactical doctrine for heavy fighter of the time, argued for example in the specifications for the Caccia-Combattmento competition(s), I personally think that there was a single gun aimed at the rear. I include nevertheless an alternate interpretation with two guns, that the gunner would have to man seconding the menace direction (I'd put the probability of this arrangement in the low tens per cent). Before going ballistic in praising this masterpiece (emphaticaly NOT joking, you HAVE to go ballistic...), please keep in mind that the original drawing doesn't sport any hint that this is either 1) the real G-51 bis, or 2) any company submitted project at all. So it must be intended as a possible (in my opinion, the only realistical) understanding of a two-crew, two-engine derivative of the G-50 line (G-51 to G-53 were al derivatives) not involving extensive redesign of the wing and fuselage. Since in that time-frame both Fiat (the still without known pictures CR-50 and CR-55 normal and bis submission to the second Caccia-Combattimento competition) and the Italian industry in general were experimenting with double fuselages, I think this is really probable. Anyway, Guidonia WAS experimenting, as the drawing I found witnesses. And, moreover, it's a pleasure to offer Tophe a twin-forked ghost he didn't know about... .
Now, let's see how much does it take to "Aerei nella Storia" to grab this and publish as "documents just emerged from the archives".. : ;D (we lack the "satanic" emoticon, so I'll add textually: >:> ). End of rant, enjoy, and after surviving awe, comment.

I'm eager to see that stuff in some future number of "Aerei nella Storia"......
L

Gabrielli in his autobiography's table (originally a FIAT internal document) says "1941" for the G-51 single seat single-engine with a A-75. No date for the G-51bis with two A-74RC. Don't be misguided by the numerical progression, in wasn't always reflecting chronological progression (in Rosatell's design even more so, Cr-50 and 55 are contemporeous in ate 1938, early 1939, CR-44 is late 1941). The Guidonia's drawing sports n date. The internal Guidonia design number is 3506. From other dated Guidonia's designs I have, that numebering could well be in 1939-40 timeframe.
And, Tophe, I doubt very much that the two Rosatelli's designs had anything to do with the G-50V. There is no hint in surviving documents of any derivation (Comitato Progetti would have noticed it). Moreover, relations between Rosatelli and Gabrielli were horrible (essentially because Gabrielli WAS horrible) and the two Uffici Tecnici worked as on different planets, even though they shared the same office floor... When Rosateli did in 1945 and little later Gabrielli became the "dominus" of Aeritalia, he had the Rosateli archive removed to the subterraneans of Officine Grandi Motori, another FIAT unit (naval and industrial engines). Now they are in the remote storage facility in Pescarito (near Turin), closed to visits. Ironically, later the very same doom fell on the Gabrieli's archive...
T

Skybolt said:
Gabrielli in his autobiography's table (originally a FIAT internal document) says "1941" for the G-51 single seat single-engine with a A-75. No date for the G-51bis with two A-74RC.
Click to expand...

;D Thanks, I have updated my twin-boom 1939-45 designs update-page,
http://cmeunier.chez-alice.fr/update_FG.htm
with this view, reduced: 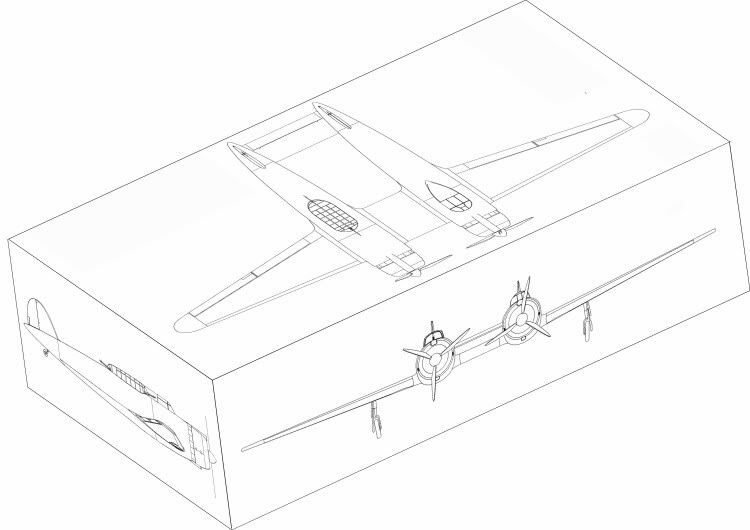 Tophe said:
I have updated my twin-boom 1939-45 designs update-page,
http://cmeunier.chez-alice.fr/update_FG.htm
Click to expand...

Updated again today writing
"[with Jemiba analysis]"
and moving it to Unconfirmed drawings part,
after a PM note of him: "just remember we only tried to figure out, which armament installation it would have had, so ure speculation !"

Maybe that was my fault, sorry ! And we really should use Scott's
method for source grading, many misunderstandings probably could
be prevented from the start.
Marco came up with a drawing, that with regards to the level of detail
could show a windtunnel model, that means, it shows the general outline,
but no details. Source grade 2 to 3, I would suggest, and clinging to this
source material, my drawing should look like that below. But the existence
of this project, I think, IS confirmed ! What is not, are just the details !
Those are just conjectures, based on other Fiat types. And for the armament,
there are several possibilities, again based on other italian types of that era.
Maybe I've gone too far with the level of detail, the source grade for those
drawings still isn't higher, than 2 to 3. But again, the general appearance is correct,
as it was directly taken from the source dawings !

Jemiba said:
my drawing should look like that
Maybe I've gone too far with the level of detail
Click to expand...

As far as I am concerned, I love your interpretation, just mentioning it as interpretation. The principle of this site is "true projects" for realists, all right, but what-ifers like me are not rejected, thanks!

PS. Maybe out of the Unconfirmed drawings part, I may present the raw new drawing (slanting box view). 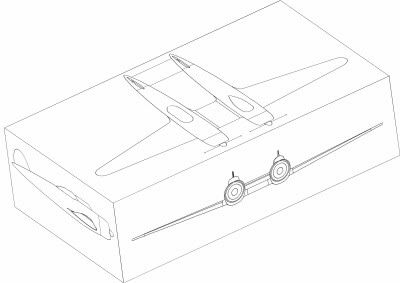 Is this basis/3-seater/2-seater interpretation a misunderstanding or right reading?

As Marco already stated in his post from 9th July, the project probably
was for a two seat fighter with a single defensive to the rear. And then it
could have looked like shown below. I'm not an expert for italian aircraft, but
looking at other types from that er, I think, that Marco is right with quite a
high probability. Italian fighters seldom tended to be heavily armed, to my
opinion. But the cockpit in the right fuselage would have been quite large
for just a gunner/radio operator with a single gun, I think. There was ample
space for a second gun and in order to increase the field of fire, maybe this
would have installed firing forward. Of course, that would have meant, that
the gunner would have had to change his position, but that wasn't uncommon
and can be found in other types, too. So an aircraft with two pintle mopunted
guns, one for and the other aft still could have been a 2-seater, I think.
A third crew member would have made such running around unnecessary, but
if the limited field of fire would really has bee worthwhile the additional weight is
doubtful. But italian aircraft often used gun installations with a covered ring mount,
actually looking like a gun turret, but AFAIK considerable lighter. Two such installations
probably would have offered quite a wide field of fire, but certainly would have made
a third crew member mandatory.
Those were our thoughts about possible (!) variations of the armament, but the most
likely could be the large greenhouse with a single gun at the rear, maybe mounted on the
mentioned aerodynamically balanced ring mount (the stick protruding from the forward
side of the mount). But all this remains open to question, the only thing for sure is the
basic layout.

Summary of basis and hypothesis: 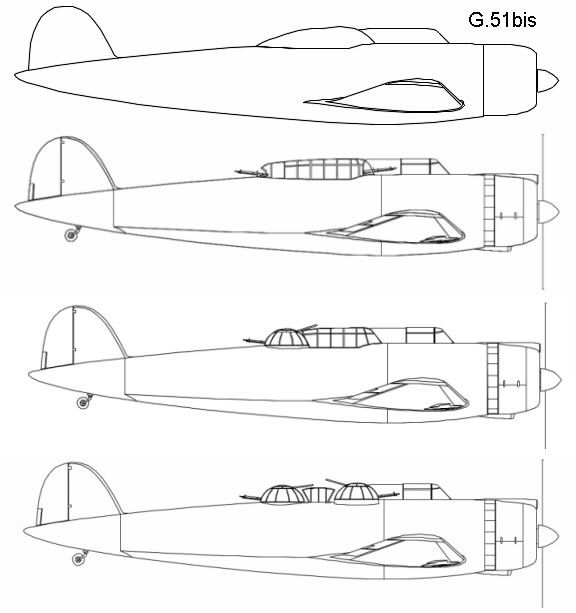 Thanks Jemiba, and Marco (= Skybolt?)

Marco = Skybolt, you bet ..
BTW, since I have them at hand, I'll add the field of fire analysis Jens made.

Well links that i had posted on 2008 are dead , these are new links updates and updated is also aerei-italiani.net