Externally and in comparison to other flying car designs, this is more a kind
of light transport. The connection of the loaded car to the flight controls
is the only difference to a conventional aircraft. Is there an "official" definition of
the term "flying car" anywhere ?
At least, I cannot see any benefits in this concept : An incomplete aircraft, not
usable without its cargo and a car, that would need a lot of instruments and controls
not needed for ground traffic .. ???

I just received this picture in an e-mail of unusual vehicles. I know nothing else about the source. I think it is, at best, a concept or mockup, and may just be an amusement park ride. Anyway, anybody recognize it? 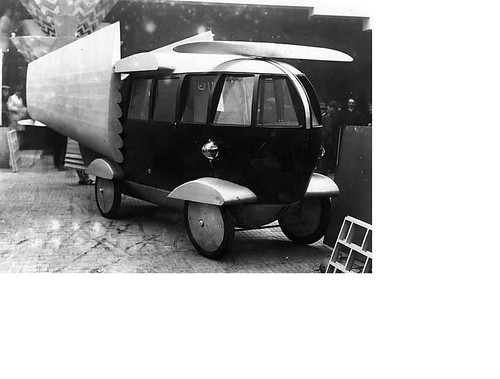 
I don't know if it was a real design or not,so I put it in this section,it was
two seat tandem wing pusher aircraft.

At the risk of executing another act of totalitarian repression, I've moved and merged the post about
the Stani two seater (which according to the linked magazin was a roadable aircraft and designed in detail)
and some other lonesome flying cars/roadable aircraft posts. The pics below are about from heshams link


at first I thought it was a hypothetical design.

Came across these two images in the book "Bracia Działowscy". This is the Działowscy DKD-10 Aeromobil "Podoficer" (first design) and the second Aeromobil design (which looks much more aircraft than combination). Neither version seems to have come about. The concept was engineered by Dlaczego Działowscy.


I displayed this aircraft before,but I discover that,it was a flying car,the
designer was Leyat.

Found these additional images of the Działowscy Aeromobil in the book Samoloty Wojskowe w Polsce 1924-1939. The first shows the "Podoficer" mock-up model broken down while the other is a testbed for the Aeromobil's car portion. It was test driven around Krakow in 1933.


here is a Cornelius FSW flying car of 1943,also the Alex Tremulis design,I don't know why they called it
Flying Jeep !.


what was this ?, a Flying car or not ?,the google translate is not good enough.

hesham said:
what was this ?, a Flying car or not ?
Click to expand...

Absolutely not. Only a study for an aerodynamic car.

Skyblazer said:
Absolutely not. Only a study for an aerodynamic car.
Click to expand...

Thank you my dear Skyblazer.
R

Skyblazer, I am not familiar with French auto manufacturers of the period. Is that from a specific company or just someone's notional project?
S

royabulgaf said:
Skyblazer, I am not familiar with French auto manufacturers of the period. Is that from a specific company or just someone's notional project?
Click to expand...

Not from a particular company, just notional by Mauboussin, who was an aviation engineer (of later Castel-Mauboussin fame, which itself merged with Fouga after the war).

An early flying car was the Whitehead No.21 of 1901, more notorious for its controversial challenge to the Wright Flyer as the first heavier-than-air machine to fly under its own power. It had two engines, with the road wheels driven by one and the propeller by the other. On takeoff both were coupled together to drive the propeller. The wings were collapsible with radial "bat-wing" ribs supporting a fabric surface and were folded back alongside the fuselage for road travel. It seems to have had a patent wing-warping system for flight control, powered by compressed air.

Sadly there is so much sound and fury on both sides of the who-flew-first debate that it is difficult to say whether it did actually fly, or even hop. The best I can determine, it could certainly chunter down the road, most probably hop into an assisted glide and may even have sustained flight, but the flight control system did not work and Whitehead said that he barely avoided crashing into an obstacle by leaning hard over to one side.

His No.22, which he built in 1902, had a rudder and twin propellers with differential power control, and was claimed to have flown full circle.

John Brown came across the Whitehead machines while researching the history of flying cars at the Smithsonian. His flying car website is at http://www.roadabletimes.com/ but from the look of it he seems to have dropped his flying car research when the first-to-fly furore erupted, not least because the site does not mention Whitehead. For that we have to suffer the battle-weariness of his http://www.gustave-whitehead.com/ (a useful resource from the opposite side of the debate is on Carrol Grey's web site at http://www.flyingmachines.org/gwinfo/ ). I wonder if that research monograph will ever get published.
S

Thanks a lot steelpillow for reminding us about Whitehead. It is true that I hadn't previously seen his name associated with the flying car concept — probably also because at the time of No.21 the automobile itself was less than 6 years of age!


this air-car was designed by Louis Lucien Lepoix,it was appeared in 1942,and
could be easy to transfer into flying car.

I recall seeing one design with a pod-like body and an air cooled pusher engine at the upper rear of the pod. It seemed to me that nobody thought out the consequences of the layour:

- high center of gravity (in combination with a tricycle undercarriage!)
- noise from the engine
- poor fuel economy on the ground, particularly at low speeds

this air-car was designed by Louis Lucien Lepoix,it was appeared in 1942,and
could be easy to transfer into flying car.

Hesham that is another design for an "aerodynamically improved" (aka "streamlined") car
and looks a great deal like a three-wheeled version of the 1936 Dubonnet Dolphin.

Also no mention to flying or air convertibility is made on the page you linked.


they wrote that,it can transfer it into a flying car aircraft.

Nope, sorry !
The only mention of aircraft is "an aircraft for tarmac". That's roughly the same,
as to call a car "a rocket", because it's that fast. But you could hardly reach the moon
or just an orbit with it either.

Indeed. It is the "Air concept car". In other words, a concept-car named the "Air". Very beautiful but not a roadable aircraft at all!

The last set of posts really should be removed I think.
J

Skyblazer said:
Indeed. It is the "Air concept car". In other words, a concept-car named the "Air". Very beautiful but not a roadable aircraft at all!

The last set of posts really should be removed I think.
Click to expand...

I disagree about removal. How about moving them to a thread about old concepts for 'improved automobiles'?
'Twould be a nice alternative to the overbearingly militaristic flavour of the rest of the site.

also there is a patent for Moore Autoplane.

here is a roadable Model or a flying car designed by Herbert Boggs.

but you can transfer Postwar flying car aircraft to anther section;

here is a roadable Model or a flying car designed by Herbert Boggs.

And from my dear Tophe,

a patent for it;

here is an old flying car,designed and built by Frank Skroback;

In the years 1929-1930, Eng. Aleksander Dłuski developed the design of the Aerobil type 2 connecting aircraft corresponding to the concept of aircraft-car, i.e. two vehicles in one. The propeller and wheels were driven by the same engine. The designer submitted the invention for patenting in the Polish Patent Office, and the Department of Aeronautics of the Ministry of Military Affairs. On May 9, 1930, he raised no objections to the grant of a patent. The idea remained in the form of an unrealized project.

that Hall Aluminum had a Project for a flying car ?,was that right ?.

here is a Tri-Phibian,designed by Mr. Vlachos in 1935,and could operated from air,sea and land.