After Aimval/Aceval the USAF tested Eagle Eye III which was a solid state television camera on the wing root with a telephoto lens that could produce a picture on the existing radar screen. Does anybody here happen to have any more details on that system or photos of the installation?

F-15 gets the Eagle Eye FOLLOWING the successful evaluation of a cockpit-mounted rifle telescope last year, the USAF is testing a new visual augmentation system for the F-15 Eagle. The wing-rootmounted Eagle Eye III is a solid-state television camera with a telephoto lens which produces a picture on the existing radar screen. Trials are being carried out at Nellis Air Force Base, Nevada, by the Air Force Avionics Laboratory and the Tactical Fighter Weapons Centre. Electrooptical visual identification systems have been used before, some F-4Es having been equipped with Tiseo (Target Identification System ElectroOptical). The desirability of optical target identification was demonstrated in Vietnam and again in the recent Air Intercept Missile Evaluation/Air Combat Evaluation (Aimval/Aeeval) programme in Nevada. Although fighters equipped with long-range missiles are theoretically capable of locking on to and destroying enemy aircraft without being detected by their victims, American pilots in Vietnam were forced to identify their targets visually before engaging them. Having thus lost their stand-off advantage, the larger, more visible US aircraft were easily spotted and often destroyed by the less well equipped MiG21s. Mock dogfights over the Nevada desert showed that F-14s and F-15s were unable to establish supremacy over MiG-21-simulating F-5Es, the Tigers consistently scoring simultaneous hits on the attacking aircraft. The Tomcats, deprived of their "fire-and-forget" AIM-54 Phoenix missiles but equipped with the Northrop Television Sight Unit (TVSU), were able to identify the smaller F-5s at a range of 10 miles without being seen. However, the semi-active guidance of the AIM-7F Sparrow obliged the Tomcats to illuminate the target by following the missile to within visual range of the F-5s. This allowed the Sidewinder equipped Tigers to retaliate, often resulting in the simultaneous "destruction" of both aircraft. Had Phoenix been used, the Tomcats could have fired from the limits of augmented visual range and then retreated. Unaided by TSVU, Eagle pilots found that they had to approach to within three miles of the Tigers to ensure positive identification before missile launch. The F-5s, on the other hand, were able to spot the F-15s at a range of five miles and take defensive action. Again, both attacked and attacker were often deemed to have been destroyed in these engagements. Eagle Eye III is an attempt to restore to the larger, more complicated American aircraft a degree of supremacy over the MiG-21-class fighter which is more in keeping with their respective price tags.
Click to expand...

Seems the original "Eagle Eye" was a rifle telescope sight that that a pilot developed a bracket for that would be aligned with the "w" on the center of the HUD. Apparently this became a popular modification during Aimval/Aceval for engagements where the ROE required the target to be confirmed visually.
Last edited by a moderator: May 27, 2019

Colonial-Marine said:
Seems the original "Eagle Eye" was a rifle telescope sight that that a pilot developed a bracket for that would be aligned with the "w" on the center of the HUD. Apparently this became a popular modification during Aimval/Aceval for engagements where the ROE required the target to be confirmed visually.
Click to expand... 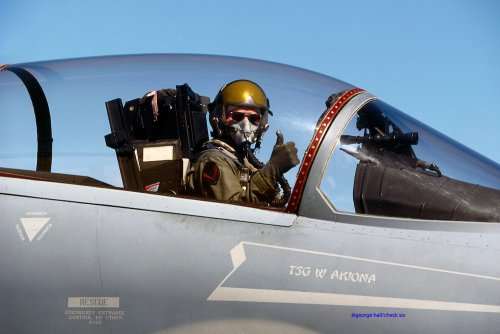 At the same time the F-5 pilots were equipping themselves with modified "Fuzz Busters" which were radar detection devices for cars and were gaining in popularity at the time. They were tweaking them to work on the correct frequencies to pick up the F-14 or F-15 radar. Tit for tat....

Although the installation of TISEO on the F-15 was abandoned during 1972, the development of a new generation electro-optic sensor was initiated during 1987. Dubbed "Eagle Eye Ill" by Perkin-Elmer, this sensor will be mounted in the same left wing root space originally reserved for TISEO. The system consists of a 23 in. long, 10 in. diameter lens assembly and video camera which provides an image on the Sperry video screen used by the armament system. The AF has not announced production plans for the system.
Click to expand...

The Eagle Eye III is an electro-optic sensor used to visually identify aircraft beyond normal eye range. It has been designed to provide the F-15 aircraft with the same type of daylight electro-optic long range capability as the TISEO system on the F-4E aircraft
Click to expand...