Research into television at the RCA (Radio Corporation of America) began in 1934. Vladimir K. Zworykin, chief engineer and television pioneer, saw in the subject a military application by flying a torpedo with an electric eye. The camera integrated in a missile can, for example, monitor the status of the torpedo controls, the correct reception of control signals, the altitude and provide pilots with information on the status of the equipment (the torpedo can be guided to its target by a short-wave radio command, the operator sees the target through the "eye" of the torpedo as it approaches. The carrier aircraft receives the image seen by the torpedo while remaining at an altitude that ensures it is out of range of the artillery.) Zworykin from 1934 launches and pursues research on other possible applications of the television in particular in the military field, various studies held secret during the war. like the equipment and system of recognition of television for the planes and the equipment of miniature television to equip the missiles. Zworykin is deploying his and the RCA's support to the US armed forces in the field of unmanned aerial vehicles. Research conducted to achieve military objectives such as the Image Orthicon CRT, used since 1944 in guided missiles, Zworykin was already considering drones through television (the term 'drone' was first proposed in 1936 by the American Delmar Fahrney, who was commissioned in the mid-1930s by the US Navy to establish a research programme on unmanned and remotely controlled aircraft. The US navy became aware of British advances in the field of unmanned aircraft.) and reflect on the drone system and its close relationship with television. distance, is thus at the centre of the realisation of unmanned devices that take the soldier away from the field of operations and put him behind a screen. The "flying torpedo" equipped with a television system, as sketched in 1934 by Zworykin, is the ideal weapon and is only one of the results of other research aimed at various applications of television in other sectors. 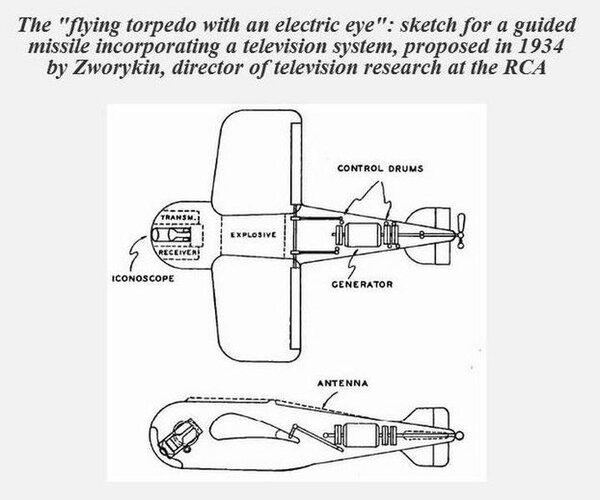