Some amazing documents shared here. Allow me to repost the whole set of eBay pics before they disappear forever... (unless of course the lucky purchaser of the original brochure is a member of this forum and wishes to share better scans of it!):

Here is newsreel footage of the Douglas XB-19 (USAAF Ser. No. 38-471) under construction at Santa Monica. Donald Douglas and (then) U.S. Undersecretary of War Robert P. Patterson appear in the footage at the 26 sec mark, which would date the footage to sometime between December 16, 1940 (when Patterson was appointed to the position) and May 1941 (when construction of the airframe was initially completed.)

And here is a real gem. This is 16mm color film footage posted by YouTube poster George Mihal (and what he's entitled the "Office of Image Archaeology") of the XB-19. The film (presumably taken/arranged by cinematographer Paul L. Hoefler) is of the aircraft being prepared for its first flight from Clover Field, Santa Monica, to March Field, on June 27, 1941, and includes footage taken from inside the aircraft in flight. Test pilot Maj. Stanley M. Umstead (USAAF) can be seen climbing into the aircraft at the 8min mark and poking his head outside the cockpit window soon thereafter.

YouTube - George Mihal: "27 June 1941, Douglas XB-19A, Howard Hughes, Paul Hoefler, Hi-Def"
As for the title of the footage, I have my doubts that Howard Hughes is the gentleman shaking hands with Hoefler at the 4min 34sec mark (that is the subject of that very short excerpt posted to YouTube by Mr. Mihal - LINK), but that is for others to ascertain.

I was there for the landing. My mother drove me up to March Field for the event. Even at five I was an airplane nut. I don't know how she knew about the thing but I will never forget it.

And here is a real gem. This is 16mm color film footage posted by YouTube poster George Mihal (and what he's entitled the "Office of Image Archaeology") of the XB-19. The film (presumably taken/arranged by cinematographer Paul L. Hoefler) is of the aircraft being prepared for its first flight from Clover Field, Santa Monica, to March Field, on June 27, 1941, and includes footage taken from inside the aircraft in flight. Test pilot Maj. Stanley M. Umstead (USAAF) can be seen climbing into the aircraft at the 8min mark and poking his head outside the cockpit window soon thereafter.
...
Click to expand...

I had never fully appreciated the colossal size of the ship. Stunning!

a German magazine expected the details of XB-19.

a German magazine expected the details of XB-19.
Click to expand...

This is not the XB-19, it look like the proposal derived by the original DC-4E.

archipeppe said:
This is not the XB-19, it look like the proposal derived by the original DC-4E.
Click to expand...

archipeppe said:
This is not the XB-19, it look like the proposal derived by the original DC-4E.
Click to expand...

there was a full development line of bombers from DC-4E. There were some six-engined variants. Mostly still unknown but you can find what we have available searching by the forum. ACResearcher also published an excellent article at The Aviation Historian.
L

The side view shown by Hesham is the well known Douglas 100ton bomber design.
Illustratons of this project were circulated by Douglas in the pre WW II press in
Europe .
As Pometablava mentioned , Douglas produced a number of bomber projects
based on their DC-4E and DC-4.

ACR did some excellent research about , but the complete store is still ro be written.
A

As often as I've seen reference made to Douglas' 100-ton bomber design, I have yet to find ANY official reference to it in ANY archive or museum. Anything in a newspaper, magazine or some online thread must be considered complete fairy-tale speculation until an OFFICIAL document can be produced.

Do you have any official Douglas or USAAF documents/drawings/etc. that make any reference whatsoever to it?

That goes as well for any speculative 6-engine B-19. Once again, I've seen nothing.

It could be that you have not seen or not found a trail of the Douglas 100 concept.
But that does not mean that there is nothing...
For exemple , the late Bill Gunston who was certainly not a phantast, mentioned the
design team of Douglas Santa Monica led by Sky Kleinhans as the origins of the initial
six engined concept for the XBLR-2

With all due respect to the late Bill Gunston, he is reputed to have an approach at times that bordered on "if it didn't exist it should have." Without seeing any specific manufacturer or AAF documents to the contrary, I will continue to doubt the existence of the Douglas 6-engine bomber. I know Curtiss did some design work on one in the mid-1930's because I uncovered and copied an absolutely pristine 3-view of it at NARA. It was obvious that the blueprint I found hadn't been looked at since about the time it was drawn. I'm going to continue to pursue every source I can find that might have info on these aircraft. Even if the various archives aren't open I still know who to call.

Antonio, you have mentioned a full line of bomber developments based on the DC-4(E). I'm MOST interested in learning more about these for a project I'm working on. Again, I've seen nothing in the AAF documents about them (which may mean I just haven't gotten to them yet), so anything you can provide me in the form of documents, drawings, file names and location, etc., would be tremendously appreciated - and probably get you a free copy of the book in which these and other projects will appear when I get to it done in the mid-distant future. This is a favorite project of mine and I'm gathering as much as I can so when I sit down to draw and illustrate it I have everything I can get.

Contact me here and we'll hopefully start to communicate about this.

Primary sources are for sure the best, but having studied history as part of my Masters', secondary sources are sometimes essential to our understanding of history. Sometimes the original documents are lost and a secondary reference is all we have - but we don't automatically discount the existence of the originals. Its not often totally faked, so there's something there. Sometimes a crumb of information from a secondary source unlocks the search for a new primary source.

Let's pursue the secondary references Lark provided and see where they lead to, and then make a judgement call on the authenticity of the information.

Copies of this mag are available on Ebay. The article in question is by Robert L. Trimble. He seems to have been a regular contributor and later editor on Air Classics. At a guess, he's probably repeating info from earlier articles. 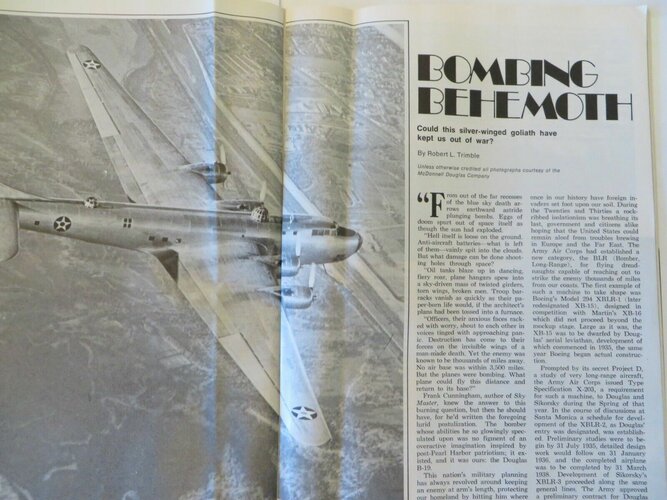 The article in question is by Johnsen & McCarthy and claims to be a Test Engineer's Account. 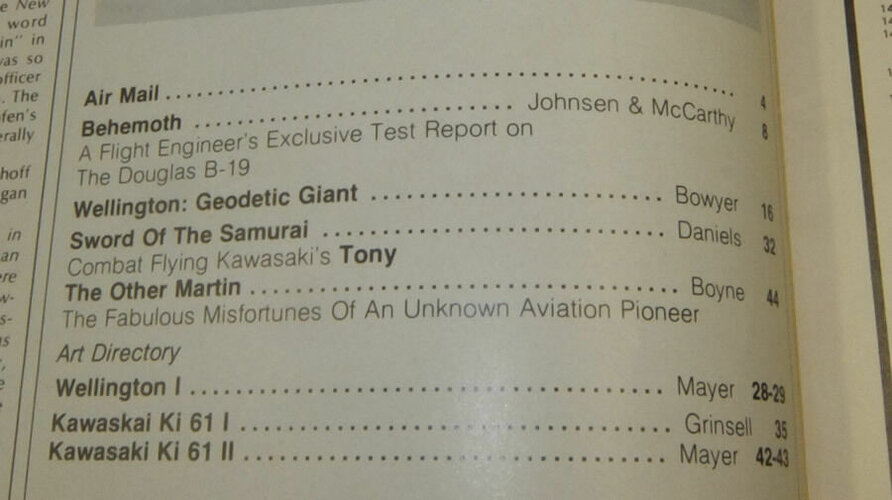 I, too, have a degree in history and had it pounded into me that the ultimate source of all wisdom is primary source materials in one's possession or having been carefully gleaned/copied at libraries/archives/museums.

I hope to find more about Sky Kleinhans and his work, but that will require getting to the Douglas files that are now at Boeing up in Seattle, and I'm not sure any have been officially added to the archives up there. But I know the folks to call/write to at least begin that search, having dealt with them over the years and shared info from my files that they did/do not have.

Still, I'm interested in ALL potential sources of information because, as you certainly know, it isn't until you can put all or most of the pieces of the puzzle together - wherever situated - that you can make an intelligent and comprehensive report on the subject. That is one of the things that has troubled me over a long period of time about this 6-engine behemoth. No matter how often a source is mentioned there is never any more specific information about it. As an historian this drives me crazy. I have the Wings/Airpower article as I bought the CD with this and many other articles on it a number of years back. They have served me well in terms of giving a clue where else and what else to look for.

So what does the Airpower article say about the 6 engine B-19 exactly?

Bill Gunston's reference had a quote in it.

Maybe the Douglas 6 engines superbomber is the source of inspiration of the massive bomber appeared into the "Japoteurs" episode of the 1941 Superman serial.