In October 1960, the Army submitted a request for proposals (RFP) for the Light Observation Helicopter (LOH). By January 1961, 12 manufacturers had responded with 19 designs;

Who will be able to add information please add.

This might be the McDonnell M-158 entry - not sure yet but it seems to fit:

What are the projects offered by Lockheed?
If you know if you can please show.
N

Lockheed Model CL-532---LOH proposal (my opinion)
What can we say about this?

Brantly offered their design for the competition but in the end, the Army deemed it too small and returned the 5 helicopters to the manufacturer.

Were the original designations supposed to be HO instead of OH?

This might be the McDonnell M-158 entry - not sure yet but it seems to fit:

A little more digging around and it appears that the YOH-3 and the YOH-2 were the initial submittals to replace the OH-13 and OH-23. When the Army deemed them too small and insufficient for the job, the LOH competition was initiated. Here's a photo of the other entry in the initial competition, later to be used as a trainer called the TH-55 Osage.

A little more digging around and it appears that the YOH-3 and the YOH-2 were the initial submittals to replace the OH-13 and OH-23.
Click to expand...

Exactly. Associating the OH-3 to the LOH program didn't sound quite right to me, but I wanted to search the matter further before writing anything stupid... ;D
The only accepted LOH contenders were the YHO-4, YHO-5 and YHO-6, which became the YOH-4, YOH-5 and YOH-6 in the new tri-service system.
S

Cessna's LOH contender was the CH-4.

[font=arial, impact,helvetica]The CH-4 LOH proposal was submitted in full to the Army in January, 1961 to kick off the year. An award announcement was expected by May, 1961. Companies submitting proposals were Bell, Hiller, Boeing, Cessna, Gyrodyne, Kaiser, Kaman, McDonnell, Republic, Hughes, Lockheed and Sikorsky; a dozen contenders for two spots. The CH-4 mock-up is pictured below; the turbine engine compartment is located behind the rear seats.[/font]

Just recently I watched a documentary titled Project Cancelled - The Cheyenne (aka the Lockheed AH-56 Cheyenne). In it it states that Lockheed submitted the Lockheed XH-51 helicopter design to the U.S Army's LOH competition! But it was turned down by the U.S Army due to its advanced technological nature (aka ridged rotor system and speed!)

A profile view of the Brantly B-2 as evaluated by the U.S. Army (from RAF Flying Review in 1960):

Here's an artists impression of the unsuccessful Kaiser KD-161, which also was listed as having some influence from Doman (probably his rotor technology used in the D-10). 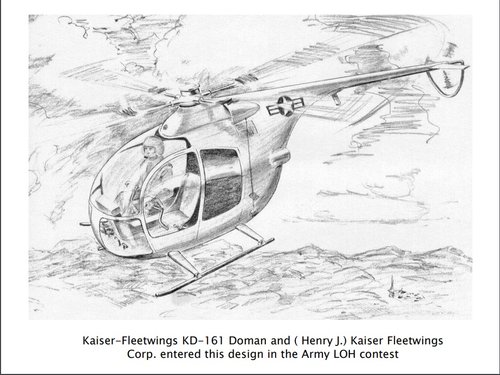 Is it possible that the two Republic proposals listed above might have been based on the Alouette II? Republic were marketing the Alouette II at the time, as far as I can tell.

Could be something to that idea.

500 Fan said:
Is it possible that the two Republic proposals listed above might have been based on the Alouette II? Republic were marketing the Alouette II at the time, as far as I can tell.

That makes a lot of sense. It was one of the few light turbine of the period. Of course because it was European it did not get to th second round. I do not know if it met the requirements, which of course may have had something to it.
P

frank said:
Were the original designations supposed to be HO instead of OH?
Click to expand...

Yes. The U.S. Army had prescribed its own designation system just prior to the 1962 MacNamara Great Redesignation. It was basically similar to the 1962 designation system, but had the Type (H for Helicopter, A for Airplane) first, and the Mission Designator (U foe Utility, O foe Obsevation, C for Cargo, etc) second. Thus, for example, the Bell H-40 became the HU-1A, (And thus Huey), and tha Caribou started out as the AC-1.