In the book Project Cancelled there is a whole chapter devoted to the British Army project for a "Jumping Jeep" which could leap across obstacles using jump jets/rotorfans. The winning bid from BAC was under development until the mid 60s when it was cancelled on cost and practicality grounds. Handley Page's efforts are covered in the history of Handley Page aircraft from Purnall books (?) but the Shorts offering is not so well covered.

This is an interesting project and I wonder if anyone out there has found any company brochures or sources other than the books above. I have not tried the US patent office yet..

I see that page 2 of the article hasn't uploaded properly, so i'll try again. Overscan, can I ask, what is the the best size, in pixels, for posting images?

If anyone has access to the "Pye Book of Science", published in the mid-60s some time, I gather there is a photo of a model of the Jumping Jeep which looks much smarter than the winning BAC P35 covered in "Project Cancelled". Could this be the Shorts entry? It apparently looks like a 1 ton Land Rover (used in the 70s for towing guns) with a large fan instead of the cargo deck.

Something odd I came across - Handley Page's "Flying Jeeps" from the late'50s/early 60's: 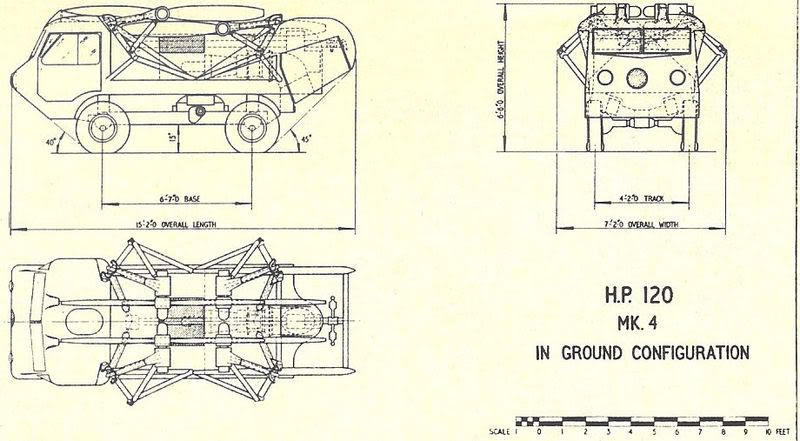 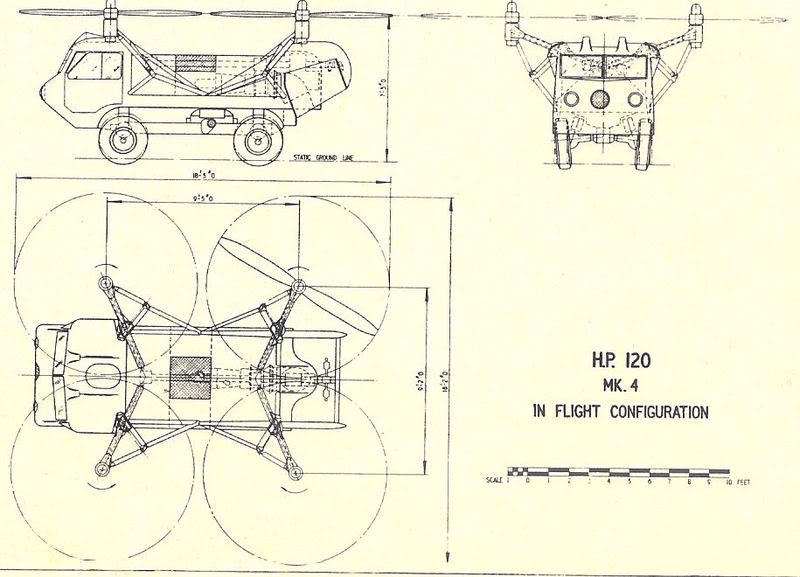 Well, during the '60s such projects boomed, not only in Great Britain,
but in France, too. Have my problems, too, where to put them. Honestly,
I can't really accept them as "aircraft", but as the COULD have left the
ground, they are ... but, AFAIK, in all cases one important point in design was,
that they shouldn't have needed a fully trained pilot, a driver with some
additional training should have been sufficient.
But they all are basically VTOL aircraft, so we shouldn't mix them up with all
those mudd-movers, I think !

see the previous thread on the 'Jumping Jjeep' in this section

Oops - my appologies for the duplication.

no probs, and apologies for my poor typing, no such thing as a 'Jjeep', LOL, ;D
S

Have a look at The National Archives catalogue search for
Project Prodigal
there is a report on this kind of study from about 5 manufacturers, IIRC

Do you know if the Project Prodigal paperwork contains further drawings of projects, or is it just a narrative account?

A book published in about 1965 called the Pye Book of Science has a picture of a jeep similar to the Handley Page model but with a large lift fan like the srn1 hovercraft. Unfortunately I no longer have this book.

AVIA 65/1540 Project PRODIGAL: army vehicle with limited airborne capability
It has drawings, including IIRC, the Folland and SR ones, and one or perhaps two from Westland, one at least with rotors.
Diagrams and photos of models. Quite a fair sized document, or I would have taken photos, but I just had a quick look when I was at TNA hunting ships.

Many thanks for this.
I really must find time to got to the National Archives. The Project Prodigal document would make an excellent basis for a book.

Following the start of the Shorts S.C.1 VTOL aircraft flight test trials in 1957/58, the Army became interested in a light scout vehicle capable of using the same techniques to cross otherwise impassable obstacles.
The Fighting Vehicle Research and Development Establishment [FVRDE] at Chobham, Surrey, issued Specification 92/58 for an
'Airborne Reconnaissance Vehicle with a crew of Two'; the (in)famous 'Jumping Jeep'.

The Handley Page company made a number of exploratory studies using jet-lift. in addition to the rotor-borne studies above.
The first series, H.P.112, were to use the RB.108, however the multiple engines required led to a too-complex installation, to be operationally acceptable.

This led to the H.P.120, on two versions. Type A was wingless, relying purely on jet-lift, for 'hopping', and short, low-altitude flights.
For land power, it would use a 100hp Coventry Climax 2 1/2 litre petrol engine, and four-wheel drive, giving 45mph on normal roads, and 25mph cross-country. Fuel capacity on land was sufficient for around 230 miles, in the air approximately 45 miles at low altitude in still air, or 50 'hops' of 1,000 yards.

The type B was to use folding wings and tail, along with jet deflection, to improve the the airborne performance, without compromising that on land.
The first version added a simple folding wing of 16' span and 144 sq ft area. This actually reduced the range to 40 hops or 37 miles.
Increasing the wing area to 178 sq ft and 27' span decreased performance still further, to 36 hops and 35 miles, even though limited thrust deflection was to be used.

Increasing the range of jet deflection to the horizontal more than doubled the airborne 'miles per gallon' and increased the range to 79 miles, without any loss of hopping ability. However, in order to achieve this, the engine needed to be throttled in horizontal flight, giving very poor sfc figures.

In order to correct this, the RB.162 was replaced with four RB.172 engines, each of 3,300lb thrust. This allowed an increase in take-off weight to 9,200lbs, from 8,000lbs while the vertical thrust remained 15% above the take-off weight.Performance was again increased, to 198 miles range, or 42 hops. Once again, the complexity of the engine installation was enough for rejection.

The final version considered was to be fitted with a single top-fan RB.162, and a horizontally mounted RB.172 engine for flight. This combination gave the best operational performance, and accordingly, was the version tendered to the requirement.
Unfortunately, when the top-fan RB.162, now renamed the RB.175, was finally run in 1962, it's thrust was only 8,800lbs, insufficient for the H.P.120, which was accordingly abandoned.

Do you see a possible legacy from a certain WW2 air-mobile assault that, uh, over-reached its support ??

A bit more "agricultural", but still a "jumping tank".

Baker manufacturing in Evansville, IL - America's heartland, so agricultural engineering (simple, tough, brutal, and meant to work in the dirt) is appropriate, although the massive hydraulic "jumping" accumulators would not be common in the back 40 short of a Jeepers Creepers 2.0 Monster killer.

Now just how 60s technology chic would a BAC P.35 rolling out of the back of a Fairey Rotordyne be?

Welcome Spall and thank you for that find !
It certainly would have been at the lower end of the Jumping Jeep
designs, but it quite probably would have met a condition, I'm not
sure many of the other designs would: That it doesn't need a dedicated
pilot, but just a driver with some additional training. And during the
late 50s/early 60s development of a flight control system, which would
have allowed "care free" handling still was a long way away, I think.

The Whaifmodelers site is a very useful source of inspiration.

I attach a drawing of the winning competitor in the British Army Jumping Jeep contest, the BAC P 35.

According to Flight International this programme staggered on past the cancellation year of 1965.

Also attached is a huge helicopter design which would have been ideal for carying the P 35 around the
place.

Given Darpa's interest in a mdern version of the Jumping Jeep, perhaps the Project Prodigal file in the NAO
might tempt an author to publish a book about this project or at least work it into another work?

The pictures to my comment below, sorry I pressed the wrong button again!

What appear to be Saro projects to the 'Jumping Jeep' requirement...

Ground reconnaissance vehicle with airborne capability based on the Champ road vehicle powered by a Coventry Climax engine. A 980 shp Blackburn Nimbus gas turbine drove a four blade main rotor and a tail rotor on a foldable rear extension for airborne use.

P.540-2 1960
Ground reconnaissance vehicle with obstacle jump and swimming capability using the ground running gear of the Champ vehicle. Maximum jump to 17 ft high over 75 ft at AUW of 6750 lb was obtained by means of a contra-rotating ducted fan with four blades of 7 ft 6 in diameter ballasted for energy storage. Power for all operations was provided by a 300 hp Lycoming six cylinder horizontally opposed air-cooled engine restricted to 90 hp for ground use.
The P.540-1 is effectively a folding helicopter on a 4X4 chassis.
Would the 'jumping jeep' been more effective had development proceeded along these lines?
Although more would be required in terms of piloting skill and maintenance, and the
vehicle would be more complex, I feel it would ultimately have been more successful.

What, pray tell were these vehicles supposed to do when they finally jumped to wherever they needed to jump to? You could hear them, and see the dust cloud from five miles away. How much fuel did they carry, and how did the jeep driver feel about carrying that around into enemy territory?

Hope this works. I have finally tracked down a copy of the Pye Book of Science
from 1963 and on page facing 106 is the photo of "proposed jumping car: jet lift
army observation vehicle with ability to leap over almost any battle obstacle".
There is no further info in the accompanying article nor is the photo attributed.

I think it is probably a Handley Page design mounted on a Haflinger chassis. I remember
it looking bigger and more like a one ton Land Rover, but now it is here I think it is
a Haflinger.

Looks ready for a spin down the King's Road with Peter Sellers at the wheel!

Yet another configuration of the Handley Page HP.120:

Very interesting ! Tried to make a quick sketch of the flying configuration. Judging the fact, that
it actually is equipped with wings and tail surfaces, it looks, that it was intended for more, than
just short hops.

Very nice, Jens. Thanks for the effort!

Some great pictures in this thread.
F

This was how Shorts were going to do it. 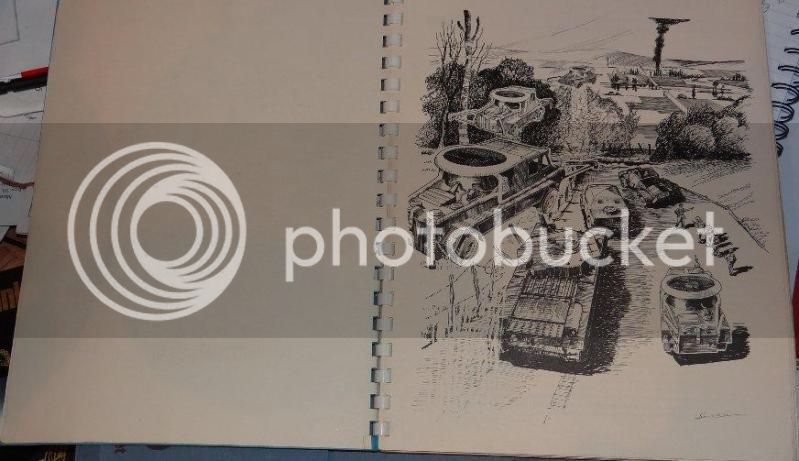 That Shorts brochure picture you posted looks something like the model illustrated in the 1963 Pye Book of Science which I posted a while back. Is there any chance of getting some more images, especially a three view.
The model looks the most modern of the vehicles presented for this requirement.


in my dear Stingray site,he displayed this helicopter as Handley Page Gyrojet
project,but I see that design looks like Umbaugh (Air & Space) Model or U-18,
I can't judge on it.

Just have a look here http://www.secretprojects.co.uk/forum/index.php/topic,1982.msg25574.html#msg25574
The shape not necessarily points to an actual relation of two designs. Here it is just the most often used
layout of an autogyro. The Max-Holste M.500 Phenix has nothing to do with the HP design, too.
Additionally you should have a look at the dimensions.