It doesn't have anything to do with fear. It has to do with the how the test flight program is mapped out and they obviously don't need to retract the gear to fly at 100 knots.

Having said that, given the bullet proof nature of V-280 testing so far, I think Bell is already the winner of the Blackhawk replacement. I think the SB-1 is now just a development program for whichever program comes after.

@ Sundog - to your point on V-280, I suspect that Bell will start on the "operational" issues, since the air vehicle seems not to have any issues with flying. Things like: "our aircraft has only six rotor blades, all of which can fit in the back of a small tactical vehicle. We can work on the engines from the bed of a tactical vehicle. Our aircraft does not have a very high CG (think slope landing). Our aircraft can hang stuff out behind the aircraft like refueling hoses, LF radio antenna, decoys. We can put extra gas under the wings, other things too."

I agree that with the current situation the V-280 would be difficult to beat, but Bell better not rest on their laurels until they have a contract. I think part of the problem for Sikorsky-Boeing is that they thought they had the program in the bag since the Army would never do tilt rotors.
T

Speed only will dictate that to them. Hence, why bother taking the risk?

"...
While the official JMR TD phase has ended, according to the Army, both Valor and Defiant continue to fly as each team works to drive down risk related to technology development that would ultimately help a possible program of record move more quickly down the road.
Even though the two demonstrators are in different places in their flight test plans, Maj. Gen. Thomas Todd, the program executive officer for Army aviation, said earlier this month that the service wasn’t planning to wait for each competitor to reach the same goal posts before proceeding. The only advantage a vendor might have in meeting timelines is that it is able to burn down risk in technology development, he added.
The Army is preparing to award an other transaction authority contract to begin a competitive demonstration and risk reduction, or CDRR, effort in March. An OTA is a type of contract that enables rapid prototyping. The CDRR will consist of two phases that last approximately one year each..."
https://www.defensenews.com/land/2020/01/17/defiant-exceeds-100-knots/

I wonder if they will keep pushing past 200Kts or if money becomes an issue.

how big is this thing

I believe they will get past 200 knots within the budget they have. Doubt they will get through a complete program to the depth that the V-280 did.

Raider is still flying, too. They might be confident enough in the results from the combined test programs that it won't much matter -- the hard part may be instilling this confidence in the customer.

Neither the V-280 or Defiant is a prototype exactly, so there will be open questions on decision-making day in either directions. Just want to fill as many blanks in with real data as possible.

fredymac said:
I wonder if they will keep pushing past 200Kts or if money becomes an issue.

With nearly $150 Billion in backlog and double digit YoY growth, I'm sure Lockheed has enough cash to self-fund its entire envelope expansion that was originally planned (if they think it may help).

It is true that LMCO could fund the continued program, if they wanted to. Think the "fighter company" may still be trying to figure out how to become a rotorcraft company as well. While both Raider and Defiant are coaxial compound rotorcraft, that does not mean that the dynamics size up well. I suspect LMCO is more comfortable with the Raider program right now.

https://www.military.com/daily-news...-prototype-impresses-leaders-flight-demo.html
"...
Both the Defiant and Raider are designed to fly at speeds of more than 200 knots, but they flew at slower speeds during the demo. The Defiant hit 140 knots, while the Raider reached 180 knots...
"When we are flying at 130 knots in this machine, we are using less than 20% of the prop power and less than 30% of the engine power," said Bill Fell, senior experimental test pilot for the S-97 Raider and the Defiant."

Finally a vid with some decent inflight footage

Test pilots on Defiant said they love the rear pusher-prop, which is designed to provide revolutionary thrust, but are also comforted that it can take direct hits in combat without causing catastrophic failure to the aircraft.

"It's all self-contained back here; you can take significant combat damage back here, and if you lose the prop, you are still a 150-knot machine," Ed Henderscheid, former U.S. Army AH-64 Apache pilot and Boeing's lead test pilot for Defiant, told defense reporters recently.

Unlike a conventional tail rotor, the rear pusher prop is completely electric, he said.

"Not having hydraulics in the tail boom as a helicopter pilot is a huge deal," Henderscheid said. "I have had hydraulics failures where they were caused by a break in the hydraulic line ... and it's scary when you have to go to keep your tail rotor where you want it. Not having to worry about a leak ... or some mechanical failure -- that's a really, really comforting thought."
Click to expand... 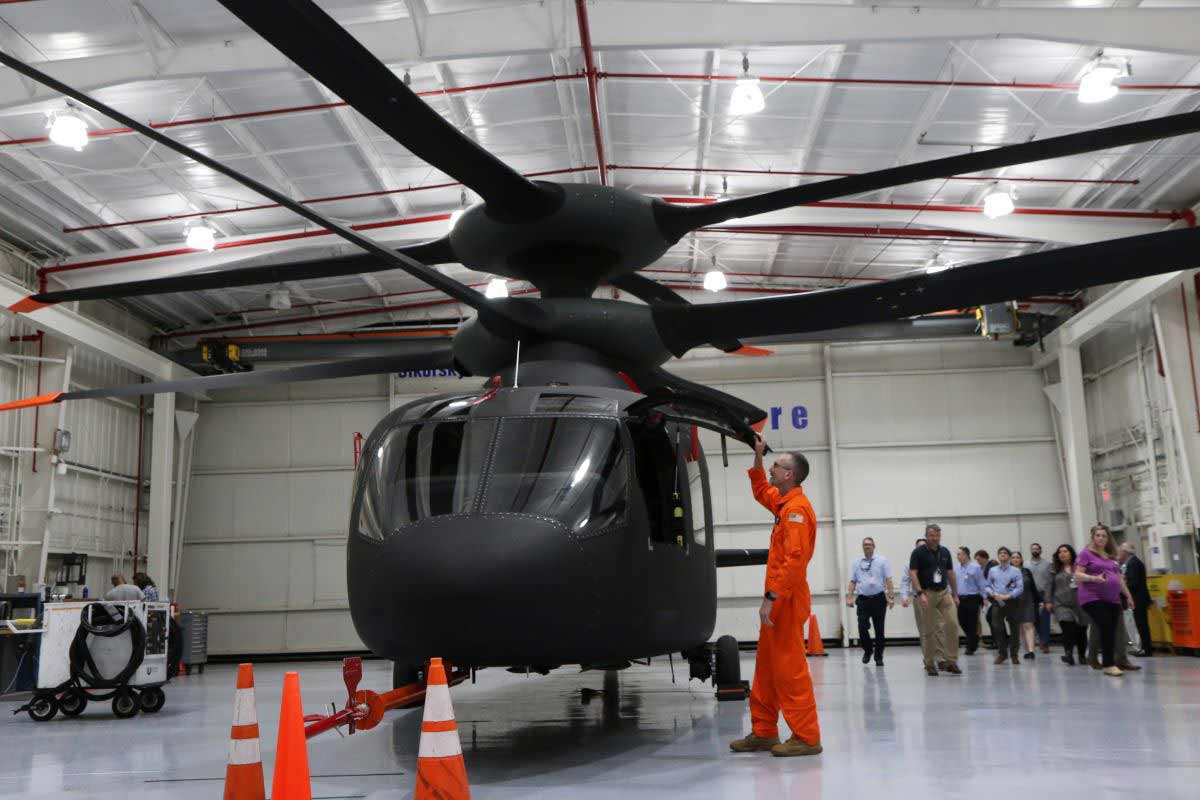 Sikorsky-Boeing officials said the new aircraft design will be capable of flying at speeds of more than 200 knots.

Not surprising that the Boeing and Sikorsky test pilots really like their product.

Why is my browser requesting on this page permission for player.vimeo.com to access virtual reality devices?
F

And congrats to Sikorsky - Boeing 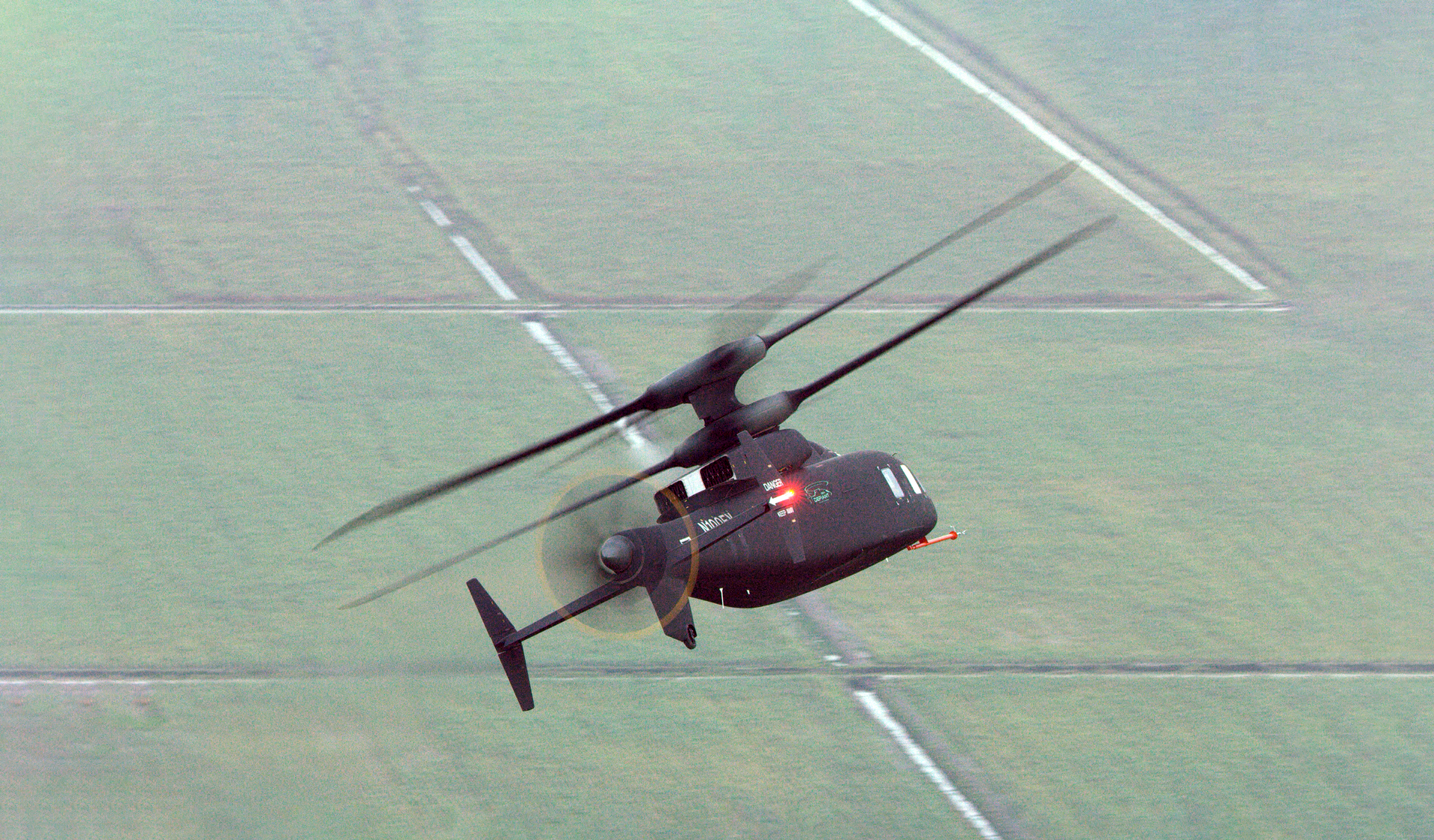 I am sure that the SB>1 team will be moving quickly to get their aircraft past 200 knots and fully competitive. Suspect that Bell will do more autonomy work and perhaps some long distance flights at cruise speed.
T

Self deploying mostly unmanned to Le Bourget will be cool to see (from the US to Brazil then crossing unmanned to Senegal and then up to Paris).

TomcatViP said:
Self deploying mostly unmanned to Le Bourget will be cool to see (from the US to Brazil then crossing unmanned to Senegal and then up to Paris).
Click to expand...

That would be great to see, but I suspect the FAA and the Insurance Company would put the kibosh on that.

You are probably right there.
A

Have they flown beyond 150 knots yet?
S

Can you provide a reference?

Possible they have, but one would think with all the competition ongoing, they would have gone for front page on every Aviation information source out there with that achievement.

RUMINT has it that SB>1 has indeed recently hit 200 knots.

yasotay said:
RUMINT has it that SB>1 has indeed recently hit 200 knots.
Click to expand...

Given that it took them nearly nine months after their delayed first flight to get to 100 knots, and their fondness for press releases, we should be getting some confirmation of this soon, one would think.

In fairness to the Sikorsky Boeing Team they have to get permission from the government to release information.
F

That combination of emojis looks uncomfortably like a farting helicopter.

If you listen to the pilot's voice when they hit 200 it sounds like it's vibrating like a m'fer. One can't help but wonder what the vibration situation is like in the V-280 when it hits substantially higher speeds. And IF that is really the result of vibration we're hearing how much worse would it be when they go faster (in the SB-1 that is)?

I suspect both aircraft have robust vibration cancellation means. ~230/250 knots with rotating wings seems to me to be inherently vibratory.

yasotay said:
I suspect both aircraft have robust vibration cancellation means. ~230/250 knots with rotating wings seems to me to be inherently vibratory.
Click to expand...

If that is the case how do you account for the pilots voice sounding like he was talking through a fan? 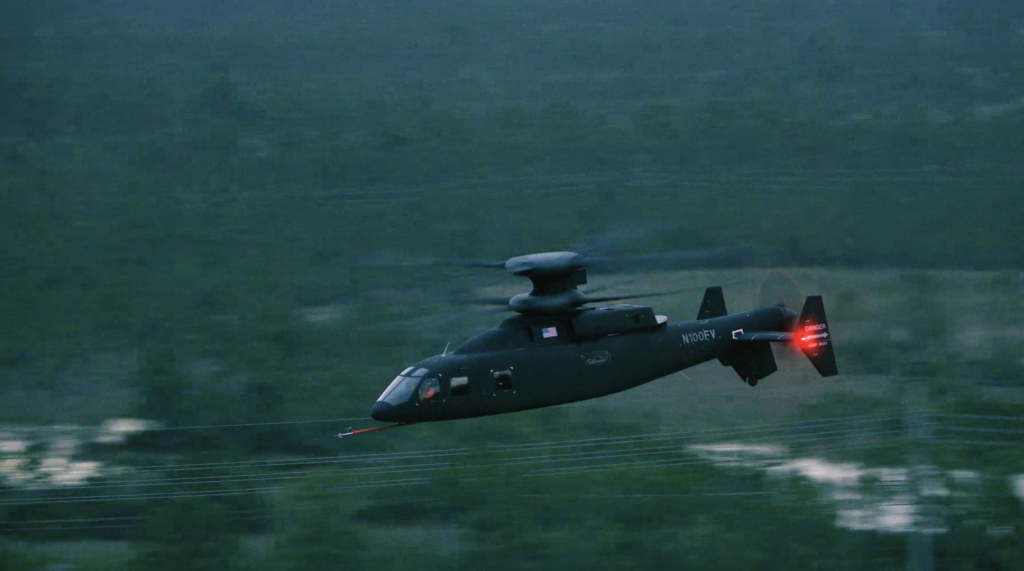 In its most recent test flight, the Sikorsky-Boeing SB>1 Defiant coaxial helicopter flew faster than 200 knots with another 50 percent power in reserve.

Touches on vibration briefly: “Going 200 knots a lot of times in an experimental envelope expansion flight can be a little bit on the stressful side, but I gotta say I felt completely at home in the cockpit. The vibration environment was absolutely on par with other production model aircraft.”

That said, if this is truly only 50% available power to the prop, you can easily under why they are expanding the flight envelope and matching all the flight data to models in baby steps.
T

Let's be fair and acknowledge that any perfectly tunned vibration cancelation hardware can only been done once the airframe is mature.

yasotay said:
I suspect both aircraft have robust vibration cancellation means. ~230/250 knots with rotating wings seems to me to be inherently vibratory.
Click to expand...

Well... maybe he is talking through "the fan" after all there are 16 fan blades on the beastie.
Seriously though, vibration attenuation has always been a challenge on ABC rotorcraft. I am not as well versed on how much tilt-rotors have to deal with this issue.
H

The Verticalmag article states the the SB-1 hit 205 knots after 18 flight hours in 15 months from first flight.

H_K said:
The Verticalmag article states the the SB-1 hit 205 knots after 18 flight hours in 15 months from first flight.

Interesting analysis, thank you. I have to wonder though how much the change of corporate headquarters has had to do with the lethargic progress. Very soon after Lockheed Martin (with no recent rotorcraft experience) took ownership of Sikorsky, the S-97 Raider hard landing occurred. With F-35 front and center, I doubt the rotorcraft programs are getting anywhere near equal time.
Share:
Facebook Twitter Reddit Pinterest Tumblr WhatsApp Email Share Link