Unfortunately I don't have a BAe 146 monography in my bookshelf (I'm sure that such a publication exists). So I hope somebody is able to help with further information on this proposal with turboprop engines (which?). Model picture is from the Polish magazine "Technika Lotnicza i Astronautyczna" 2/1987.

I found this artist's impression of a BAe 146 with turboprops in Air Pictorial November 1986. The reference to Page 419 only discusses the BAe 146-300. What might these advanced open rotor engines be? Might it have used RB.509 or 539 variants perhaps?

Keep in mind that prop-fans were all the rage in the mid-1980s.

Actually close examination of both pics does appear to indicate they had contra-props. Interesting that even back in 1986, the Brits refered to such engines as "Open Rotor", when most of the world had taken the US term "Prop Fan".

I think BAe Systems PLC should joint venture with Saab AB to formed a company to produce turbofans engine aircraft.

Just found these images that seem to show Hatfield took this seriously enough to chop up some bits of a Fairey Gannet (Double Mamba and props anyway) and a 146 to make a rig. Apparently these were vibration tests done after Hatfield closed, but there was an intention to fly a 146 with Double Mambas (http://www.airfieldinformationexchange.org/community/showthread.php?795-Wind-Tunnel-Models/page2):

Following on from the 146-NRA was the original RJX, this was a twin-jet derivative that would have used the Rolls Royce/BMW BR.715. For years I have slavishly followed the description and drawing in "Stuck on the Drawing Board" and been confused as to why the RJX looked almost identical to the 146-NRA and yet would somehow cost £1 billion. The RJX would have been a joint venture with Taiwan and run through Avro International Aerospace (would have been a new company) but the plan came unstuck when the Taiwanese end could not raise the capital. Then, today, I came across this image online. There is an interesting interview in Flight Global from 1993 about the RJX that talks about it being radically different from the 146-NRA but it says nothing about the wing mounting choice, in fact the design still sounds very vague at this point. Is it real, was there really a low wing RJX?

I can remember seeing drawings for an turboprop version of the 146, The Photographer at Woodford produced a CD with lots of interesting photos on. I will see if I can find my copy for the board.

That would be great!

it's a little known fact, mentioned in Cheremukhin's memoirs that BAe approached Tupolev DB for using of Tu-334 wing for twin-engined, top-mounted wing version of NRA/NRL
Bae was also interested in Tupolev experience with Tu-204 engine pylons. Cheremukhin remembers that Bae engineers highly marked aerodynamically elegant and easier design of wing/fuselage mating/fairing offered by Russians - much better than that on Bae 146 as they said
after a year of forth-and-back visits Bae informed Tupolev that their marketing research had shown that NRA won't sell well and project was ceased
Bae has invested about J 50,000 in this co-op effort, and Tupolev staff has visited Chester A320 wing assembly facilities and Rolls-Royce factory, making numerous photos in allowed areas that later were assembled in album issued in 10 copies for MAP authorities and happily chocked
these were the days...

PaulMM said:
That would be great!
Click to expand...

Thanks for the detail, I knew that BAe and Tupolev had spoken about the 146 but I did not know that it was the wing mating and engine mounting they were interested in. At one point there was a plan for a 146/RJ line in Taiwan too.

Thank you! The prop-fan 146 is certainly very elegant. Perhaps these three threads should be merged into a single 146 variants thread?

There was a study in the early 70s that looked at using the Spey 67, it was requested by the Department of Trade and Industry and was probably an effort to get a British engine on to a promising design.

Colour rendering of Prop variant, from promotional artwork. Must dig out the rest of these.

A turboprop variant looks interesting, and one can see the benefits (especially with the Double Mamba or similar as the chosen powerplant) but turning the 146 into a twinjet seems to defeat the purpose. I remember flying between Hobart and mainland Australia on these things several times, and found them fascinating. Even wrote to BAe asking for technical data and sales brochures, which were duly supplied, in the latter of which the advantages of the quad-jet over the small twin were repeatedly emphasised as selling points.


Granted, the current generation of very high bypass turbofans MIGHT change that, but IIRC one of the selling points of the quad is that if you lose one engine, the remaining three are more evenly distributed across the span, whereas if you lose one of two with equivalent thrust, the asymmetrical effects (drag, handling issues) are substantially greater.

Pathoiogy_doc, I think the reason behind the re-engined, twin BAe 146 was to compete in the 'ordinary' 100-120 seat market, rather than just the Quiet/STOL, 'John Wayne Airport' market sector.Basically, your comment about loss of an engine is *very* valid in the STOL/small airport case, however, in conventional operations, more engines more more maintenance, which means more cost...
Also I believe there were reports of problems with the original engines, reports of fumes entering the cabin/flightdeck. AFAIK the manufacturers denied these claims, and nothing was ever proven, however, changing the engines would have made all this go away.
Lastly, from Flightglobal :-


a short article on the propfan 146, explaining the rationale to use an existing engine development rather than an all-new type.

I'm trying to remember who it was who said: "I'll feel safe travelling by air when the co-pilot can say 'Sir, we've lost engine number 29' and the pilot replies 'Engine 29, you say - left or right?' " or words to that effect.


Mind you, this WAS back in the day when piston engines were all there was. Does anyone know if any current- or recent-production propeller-driven commercial airliner still uses a reciprocating engine? Or are they all turboprops now?


here is a new propulsion options for BAe 146 aircraft.

Model now at the Avro Museum... its hidden right at the back of the display and you have to crawl under the nose of a Vulcan to get to it! 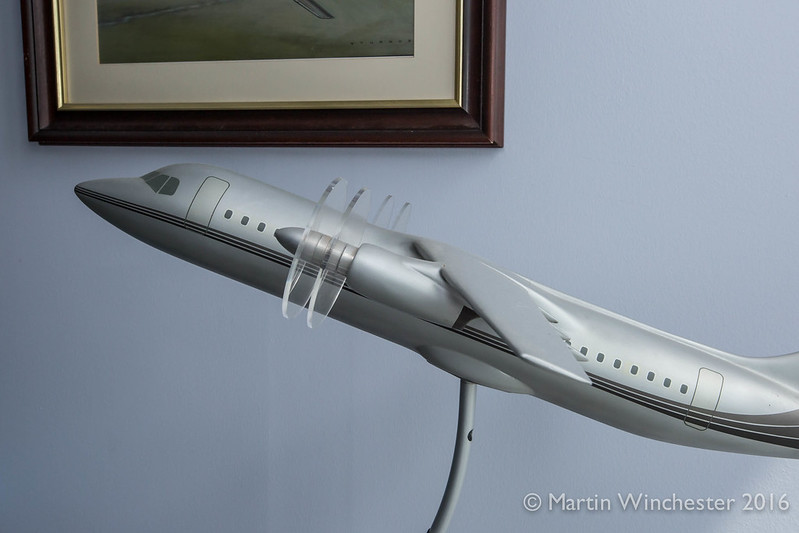 I haven't seen these mentioned yet:

146N naval COD
Carrier-capable version
based on 146-100 STA with large freight door
extendable nose wheel (to increase AOA on takeoff, and to help stow the aircraft in the hangar)
Folding wings, with the fold just outboard of the engines.
Landing tests were done at USN Patuxent River in 1986 using a 146-100 demo aircraft


all are listed in 'BAe 146: Britain's best-selling jet airliner' from Key Publishing.
Includes a 3-view of the MRL and artist's impressions of the MRL and 146N.

31st January 1990. This was for a two engine version of the 146 Airliner. 22 pages of text, two colour full page photographs plus a one page colour artists impression drawn by 'Bailey' 1989. Rusty staples.
www.ebay.com

The prop versions look like they could have lent themselves to be a useful low-cost MPA platform.
H

I got a brochure on a 2-engined variant from eBay. This seems to be different to the NRA mentioned upthread, this is a proposal based on the Bae-146-100, slightly lengthened (by 1 row of passengers), with Tay 650 engines, and a longer wing (?).
Entire brochure (10 Mb PDF) 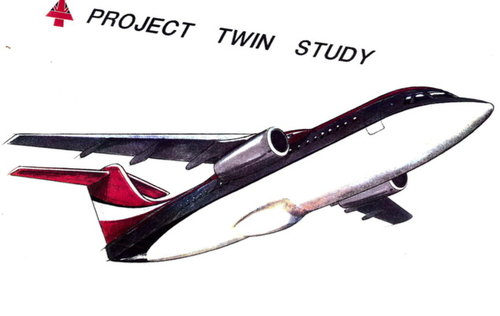 Comparison between the BAe 146 wing (blue) and the wing from the Project Twin study (red), to see the extent of the changes. 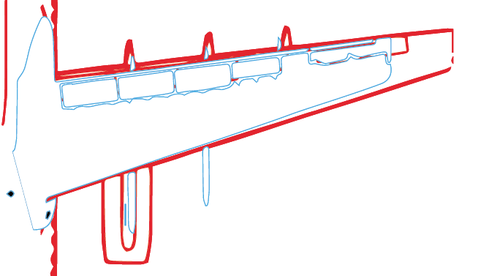 I did a quick comparison between the Project Twin study and the NRA project, I wanted to see if they were related or different projects.
1. Time frame is the same, 1991
2. Both list a new, longer wing.
3. Different engines
4. Different fuselages, Project Twin is based on 146-100 and NRA is a stretched -300.
5. Project Twin booklet doesn't mention NRA at all.
F

Moved off topic discussion to https://www.secretprojects.co.uk/th...ogen-aeroplanes-feasibility-and-issues.33636/

146 always seems a classic British project. Responding brilliantly to a niche requirement, but a commercially unproductive one and then desperately trying to evolve it to compete on the main field.
These unbuilts are fascinating but what stands out is that desperation to get away from 4 engines and high wing to the “optimum” 2 low wing design of which 1000s and 1000s of 737/320 have been sold.

I guess they read too much into the “cityliner” concept and missed that people would just travel to an airport that could take the 737/320 type because the seat price and thus ticket cost were lower. It also strikes me a lot of the 146s origins came from an era in the UK of Govt directed requirements and effective control. Shades of VC10 and Trident all round, indeed the same flaws right back to Brabazon.

Having done 100s of flights in a 146 they are a nice ambience, but I’d struggle to identify the difference to a 737/320. Not one of those flights was to a place you couldn’t have got a 2 engine low wing ac into.
(a bit like on UK train forums there is huge passion for “quiet” electric trains vs noisy underfloor diesal ones but when on one, if you are not an enthusiast, it’s bot something people even know let alone care about)
A

PT: same flaws right back to Brabazon. Not really this time. It was the lure of vast demand from China.

Mid-1960 Sino-Soviet Split, Sov. technicians, data, money removed. PRC industry sets about reverse engineering everything left behind. US does not/UK does recognise the regime. UK finds a way to deliver 6 Viscounts for money, 7/63. Success. Talk of much more at every Farnborough/Paris/Hanover Show. HS tries their luck on Trident. China has no money....until Pakistan barters 4 Trident 1E to them, 6/70. Success. HS 8/71 sells (6, to be 33x2E+2x3B). 1st. delivery 19/11/72, great festivities, eternal friendship. What more can we sell you, say HS?

Its Conqueror managed Tibet by air, Chengdu-Lhasa: short and high. China said: we need more than 2 engines on a short-take off type - rotten Russian engine reliability is killing us. DH/HS had long been kiting STOL, so quickly schemed HS146 around Avco Lycoming's attempt to turn a heli turboshaft into a turbofan. RR had interest only in surviving and delivering RB211 and RB199. HS Group persuaded HMG into Launch Aid, 8/73, playing the China card. US had overcome its aversion to Beijing, selling 10x707, 6/7/72, so Open Season!

China gloated as US suffered ordure in SE Asia, and bought nothing more from anyone. New UK Govt. withdrew Launch Aid, 10/74. Then Nationalised HS as BAe., 29/4/77. Hatfield then had not a lot on. Diplomatic Intelligence in mid-1978 was of China's emergence from upheaval - XP Deng would Open the Trade Door, 10/78. BAe spread the risk by enlisting SAAB (posterior) and AVCO (wing+engine) as risk-sharing partners, and extracted £250Mn. Launch Aid,10/7/78 on renewed China prospects. They did sell 10, delivered 9/86, later +8.
Last edited: Apr 30, 2020

Been going through the archives and found another couple of shots that I've been able to rescue from my visit to the Avro museum... a 3/4 view of the Propfan powered version and a couple of rear 3/4 shots of the RJX...

Artists impression of the NRA from a large format company photograph.