TsrJoe said:
one id planned but never managed to get around to was the 'B.3' from 'Broken Arrow'..definately a neat looking design which id love to see in model form someday...
Click to expand... 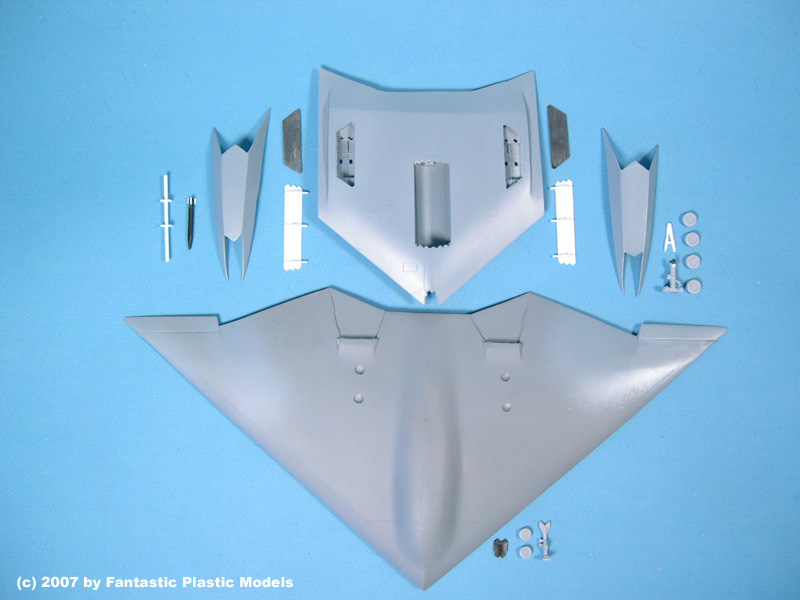 Hey ... very nice ! CAn You tell anything about release date, price and especially its dimensions I don't know more about that "type" other than being slightly smaller than the B-2 ... so in 1/144 this would be ? ???

Thanks for posting, Deino

Deino said:
Hey ... very nice ! CAn You tell anything about release date, price...
Click to expand...

Nope. Not my department.

and especially its dimensions I don't know more about that "type" other than being slightly smaller than the B-2 ...
Click to expand...

Actually... not so much.

Is this B-3 model based on an actual design study by one of the contractors, or is it conjectural? In any event, it's a sweet-looking plane.

CFE said:
Is this B-3 model based on an actual design study by one of the contractors, or is it conjectural?
Click to expand...

Purely conjectural, on the part of the production designers and modelmakers for "Broken Arrow." And while the design has some aspects that I'd take issue with, it actually seems *reasonably* good for a transonic B-2-descendant. Certainly not a supercruiser though.

Skilled craftsmanship and a lot of special effects wizardry were employed in the design of the B-3 Stealth Bomber,an imaginary extension of the current Stealth model bomber, the B-2, modified by Gross to look even more sleek and mean on film.
Since the Stealth is ultra-secret, the production received minimal cooperation from the military.
Instead, Gross and visual effects supervisor Don Baker used their considerable skills and imagination to design a one-sixth scale miniature, measuring eighteen-feet long and fourteen-feet wide.
Click to expand...

Are those B-2/B-3 drawings really in the same scale? The cockpit of the B-3 looks larger although it seems the same shape. My sense of the aircraft in the movie was that it was substantially smaller than a B-3.

However, the drawings and Scott's model layout help. I have some odd-scale B-2 around somewhere I could probably hack up into a B-3 in 1/72. Although then, what will I use for the 1/72 Northrop ATA? :'(

Kim Margosein said:
Are those B-2/B-3 drawings really in the same scale?
Click to expand...

Roughly. The available information on the dimensions and scale of the model built for the movie conflicts. Look at the human figure in the B-3 drawing to help give soem scale... it's not a small plane. And as for the cockpit being big on the B-3... take a look at it as shown in the movie. It is, like too many Hollywood movies, quite open and spacious.
K

I gotta get the movie to figure this out. I tried downloading the clips from the Fox site but are postage stamp size.

Does anyone know the approximate dimensions of the hypothetical B-3 "Stealth Bomber" from the film "Broken Arrow?" A resin kit was recently advertised on the "Fantastic Plastic" website, but without anything to scale the model.
P

Look the second topic in the page number 10 of this forum.

or just put the link here