As promised in my earlier post on the commercialized Martin Mars in the Early Aircraft Projects subforum, here is information on the second issue of the American Aerospace Archive covering the navalized derivative of the F-107A, the North American FJ-5: 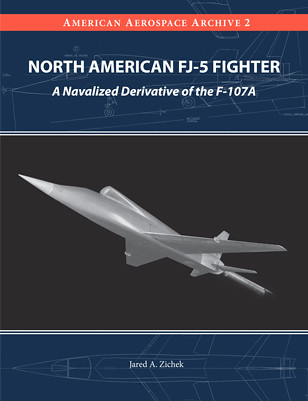 The NAA FJ-5 fighter proposal was prepared for the Bureau of Aeronautics on July 6, 1955. With its dorsal inlet and sleek aerodynamics, the FJ-5 was among the more unusual and exciting naval fighter proposals of the 1950’s. This monograph covers the prototype, basic (production), supersonic reconnaissance, and rocket-boosted interceptor variants of the design. It is illustrated with 5 wind tunnel model photos and 28 drawings, the majority of which are incredibly detailed and provide ample reference for those wishing to create an accurate model or illustration of this radical jet fighter. The accompanying text is based on official North American reports submitted with the proposal and describes the type in exhaustive detail. As with our earlier monograph on the Martin Mars , this 36 page publication is printed in brilliant full color on high quality 80 lb semi-gloss paper with saddle-stitched covers.

As stated in my earlier post, I will be offline the next few days but will field any questions you may have next week.

Jared, this looks really interesting. Thanks a bunch for posting this!
A

Great to see you on the forum, I've enjoyed all your articles from Wings, Air Power and Air Enthusiast over the years.

My apologies to Tony Buttler. He told me that North American proposed an F-107 lookalike to the Navy and I thought that he must be wrong because North American had already tried and failed twice: It proposed a sleek all-new design with a two-position wing to the Navy in the original competition that Vought won and then an F-100B Super Sabre variant in November 1953. North American obviously kept trying to unseat the F8U, even after it flew in March 1955, with this July 1955 proposal. I look forward to reading this monograph.

Tommy, this new book by Jared looks interesting too:

I'm interested in fitting this proposal into the Navy's informal evaluation and procurement process. In June 1954, according to a BuAer memorandum history of the Model F4H-1 (AH-1) dated 15 December 1955, BuAer evaluated "the F3H-G/H, the F3H-E2 (a single engine version), the Grumman 98D" (a variant of the Tiger - I'll try to find out more), "and the North American Super Fury, a modified F-100". The latter is the original F-100B, which was a stretched Super Sabre that had been informally proposed in November 1953. The decision was made then or within the next month or two to buy the F3H-G/H as the AH-1.

As of March/April/May 1955, the XF8U-1 had not only flown, but had gone supersonic on its first flight; the AH-1 was in the process of being transformed into the F4H; the Attack Branch within BuAer is revisiting the Nagpaw proposal from the North American division at Columbus, Ohio as a replacement for the AH-1; and the Fighter Branch was talking to Vought about a Super Crusader powered by the J75 and armed with Sparrows as an alternative to the F4H.. North American apparently thought that the Navy would also be interested in a general purpose fighter, since the XF8U, F11F, and FJ-4 were essentially day fighters with limited air-to-ground capability and this "FJ-5" doesn't have the requisite Sparrow armament to be a fleet air defense fighter.

Thanks very much for bringing that to my attention. My book on Navy carrier-based attack aircraft is in layout at Specialty Press but since it covers 1945 to 2005, it can't get into anywhere near the same detail that this must have. Plus he's obviously got better access to long buried files than I do...
A

Tommy, when can we expect your attack aircraft book?

AL said:
Tommy, when can we expect your attack aircraft book?
Click to expand...

I haven't gotten an official projection. It could be as early as March but it depends on what else is ahead of it in the pipeline. It will show up on the Specialty Press web site as Strike from the Sea about three months before it hits the bookstores.

It could be as early as March
Click to expand...

That are really good news.
K

I always thought the FJ-5 was a navalized F-100... Regardless, the F-107 is a better aircraft so I suppose that is a good thing.

I'm guessing they decided to call the plane the FJ-5 because it would mislead Congress into believing it's just an evolution of an already existent design rather than a new design? Because from what I remember the FJ-2 Fury had very little in common with the FJ-1 and was virtually a different plane (meaning it probably should have technically been designated F2J-1, though I could be wrong) and the USN actually wanted to initially call it the Sea Sabre (after the British tradition), but chose to go with Fury as it would be easier to sell to Congress...

I guess one of the greatest advantages that the unorthodox dorsal-intake arrangement of the North American FJ-5 would have offered during carrier operations would have been less chances of ingestion of foreign objects and deck crews!
I would also think that due to its very tall tailfin, like that of the A-5 Vigilante it probably would have required a folding tailfin arrangement, for hanger storage.

The preview of the monograph at http://magcloud.com/browse/Issue/5087 shows the FJ-5 with a conventional vertical tail with a rudder and no folding element. The tail is like the early F-107/F-100B which was later changed to a single piece tail like on the A3J (A-5) on the built F-107s. Both the A3J and the F-107 had a tail height of around 5.9 m. If the FJ-5 was to have emerged as a built aircraft with the F-107/A3J type one piece, all rotating tail then it would be a very simple affair to place a fold break to reduce height.

Thanks to all for the kind words. Also, thanks to Overscan for posting the link to my new book on Amazon - I was unaware that it was up for preorder! I will do a post on it here and at aeroarchivepress.com at some point in the near future. This book is chock full of proposal goodness, with some very "Buck Rogers" type aircraft profiled in great detail.

Also, thanks to all who ordered some issues over the weekend - they will be shipped out ASAP. Note to my international customers: we have a bug with our shopping cart system that ends up charging $5 too much for postage if you order 2 different issues - I refund this amount ASAP.

Finally, I will be sending review copies off to the major aviation history/modeling magazines in Europe - I am not subscribed to most of these magazines, so apart from the British ones that are imported over here, I won't know if they review it or not. If someone does spot a printed review of the Mars or FJ-5 monographs, I'd appreciate it if you could mention it here or email me at editor@aeroarchivepress.com - I want to make sure I'm not sending these off in vain.

Count on us, Jared ! BTW, did you have receive my order for both the books ? (pre-ordered the Schiffer one, too).

I may have processed your order last night - what's your actual name? I got so many orders yesterday that my hand was aching from filling out all the customs slips. Make no mistake though, I really appreciate the business, especially given the economic crisis and all the other media out there I'm competing with.

Also, to those who have ordered the magazine and received their copies, please feel free to post a mini-review on this thread and the one on the Mars, especially if you really like it. Some folks are a bit skeptical of print-on-demand publications, but MagCloud offers very good quality on par with your average offset press publication. I think this publishing approach will become more common as the technology becomes more widespread, especially for niche subjects like this. I for one would like to see a publication solely devoted to AFV projects and prototypes - a subject I've never had time to research but have become increasingly interested in.

Jared, I'm from Italy, and since I suspect that mine is the sole order coming from this beautiful AND despairing (aeronautically-wise) country, you'll have no problem in identifying me...
Print on order: my position, and probably this is valid for a great majority of forum members is: publish in whatever way you feel fit, but publish. Too much aviation history is locked in private collections (I am speaking to Italian members with a special and targeted force... expecially to those who look and don't post...), only to be used when someone finally publish what he has found to say "ahah, you missed this and that, and you misunderstood that and this, you don't have these documents..." . Sorry for the tirade, but I'm really sick of this situation.

Skybolt said:
Too much aviation history is locked in private collections (I am speaking to Italian members with a special and targeted force... expecially to those who look and don't post...), only to be used when someone finally publish what he has found to say "ahah, you missed this and that, and you misunderstood that and this, you don't have these documents..." . Sorry for the tirade, but I'm really sick of this situation.
Click to expand...

In fact, my experience in Britain has been that most archivists and authors were only too glad that someone was interested in the materials they were holding and immensely helpful. However, there are plenty of "collectors" (including the occasional forum member) who never share what they have, but are only too happy to grab everything they can.

Glad you liked the magazine! Thanks for the support and comments, may incorporate those into an updated version of the monograph down the line. It's easy to make changes and upload them quickly. Not much I can do about the address label issue, unfortunately that's the way MagCloud does it at this time for US orders. The foreign orders I handle through aeroarchivepress.com don't have the label issue, and I ship them in an envelope with a stiff cardboard backer.

One note though: due to a family emergency, we won't be able to process any more overseas orders till late next week. I've processed the ones I received up till today, but have taken down the shopping cart on my website. US orders through MagCloud are unaffected by this.

Finaly an explanation that makes sense!

I just put the first 7 pages of the magazine up on <a href="http://www.scribd.com/doc/12875362/North-American-FJ5-Fighter-A-Navalized-Derivative-of-the-F107A">Scribd</a>, a document sharing site. Unlike the MagCloud preview, this is high resolution, allowing you to get a good look at some of the illustrations. If you have not yet purchased the magazine and would like to view this high quality excerpt, check it out!

A PDF ebook version of "North American FJ-5 Fighter: A Navalized Derivative of the F-107A" is now available: 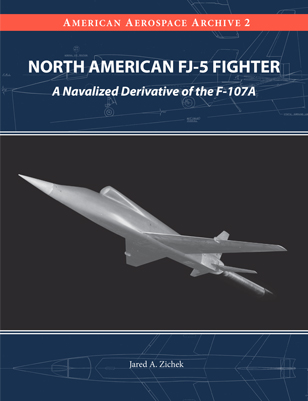 It is priced at a reasonable $3.95. Unique to this version is a special 24 page legal size section reproducing several of the drawings from the main body of the magazine in an uninterrupted landscape format. For a full preview of the contents, please visit MagCloud