My name is Jared Zichek and I've finally joined your wonderful forum. I've been researching, writing and illustrating articles and books on various esoteric aspects of aviation history for about 8 years now. Recently I've started a new magazine focused on US aerospace R&D from the 1920's throught the 1950's. The first issue is about commercial derivatives of the Martin Mars flying boat: 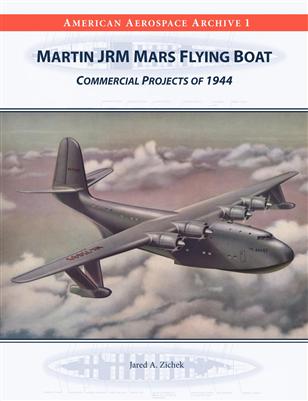 This magazine reproduces a lavish promotional brochure from 1944 of the Martin JRM Mars Transport Airplane, a commercialized version of the world’s largest production flying boat. The magazine covers three proposed versions of this luxurious “flying hotel” with 65 stunning color illustrations and photos throughout. A beautiful artifact from a vanished era, this 36 page monograph is printed in brilliant full color on high quality 80 lb semi-gloss paper with saddle-stitched covers. For a full preview of the magazine, please visit <a href="http://magcloud.com/browse/Issue/3629">MagCloud</a>, the printer and distributor of the American Aerospace Archive.

We've already published a second issue, which I will profile in the postwar forum. I will be offline the next few days but will field any questions you may have next week. I really enjoy this forum and look forward to participating in the discussions ahead!

Wow!. Love US projects from that time!!. You have a loyal customer here
L

I clearly remember your marvelous articles in the Wings/Airpower magazine.
Great to have you here...

And the BIG book on the Boeing XF8..
BTW, in the preface you hinted at other incoming publications on wartime Boeing fighter projects... now our hope lives again !!

Thanks for the kind words! Scott Lowther covered several of the WW II Boeing fighter projects in APR, but I've unearthed more of them at NARA. They will definitely show up in a later issue of The American Aerospace Archive, unless someone else publishes them first.

Also, thanks to all who ordered some issues over the weekend - they will be shipped ASAP. Note to international customers: we currently have a bug with our shopping cart system that ends up charging $5 too much for postage if you order 2 different issues - I refund this amount ASAP.

Finally, I have sent review copies of the Mars monograph off to the major aviation history/modeling magazines in Europe - I am not subscribed to most of these magazines, so apart from the British ones that are imported over here, I won't know if they review it or not. If someone does spot a printed review of the Mars or FJ-5 monographs, I'd appreciate it if you could mention it here or email me at editor@aeroarchivepress.com - I want to make sure I'm not sending these off in vain.

I just put the first 6 pages of the magazine up on <a href="http://www.scribd.com/doc/12874446/The-Martin-JRM-Mars-Flying-Boat-Commercial-Projects-of-1944">Scribd</a>, a document sharing site. Unlike the MagCloud preview, this is high resolution, allowing you to get a good look at some of the illustrations. If you have not yet purchased the magazine and would like to view this high quality excerpt, check it out!
A

Liked the look of the Martin Mars volume, so have just ordered one.
I love these commercial flying boats, the clippers etc.

Now if I could only get somoeone like you guys to do a volume on the US Navy's large rigid dirigible projects from the late 1930s (after the loss of the Akron and Macon) through to the late 1940s.
Then of course supplemental to this, are the commercial proposals which came from Goodyear from late 1920s-late 1940s.

Anyway I wish you luck with future projects

Andrew, thanks very much! I am quite an enthusiast of airships myself, though I don't have a whole lot of original material concerning the topic in my collection, unfortunately. I do hope to do another issue down the line focusing on interwar commercial projects that will include clippers and floatplanes though.

Now if I could only get somoeone like you guys to do a volume on the US Navy's large rigid dirigible projects from the late 1930s (after the loss of the Akron and Macon) through to the late 1940s.
Then of course supplemental to this, are the commercial proposals which came from Goodyear from late 1920s-late 1940s.
Click to expand...

Thanks to Jemiba I ordered a copy from this book:

There are a few ads from Good Year showing that airship proposals. There is an aircraft carrier airship with Corsair fighters.

By 1944 one would think the handwriting was on the wall as to commercial flying boats. Except for the remoter areas of the world it had to be easy to see that the war would have the result of littering the world with airstrips. Plus the DC-4 and Connie were already on line

This did not seem to stop several flying boat manufacturers (Martin, Convair, Short, Saunders-Roe) from trying to keep the concept alive. They often attempted to market commercial versions of their military flying boats well into the 1950's, I believe - a great deal of money had already been sunk into design, development, tooling, etc.-why not spend a bit more to develop a commercial proposal? As an aviation enthusiast, I wish they had succeeded, but I doubt I could have afforded to fly on one! Land-based airliners are just more economical to operate.

It is priced at a reasonable $3.95 and is available through <a href="http://aeroarchivepress.com/?p=12">AeroArchivePress.com</a>. Unique to this version is a special 3 page legal size section reproducing several of the illustrations from the main body of the magazine in an uninterrupted landscape format. For a full preview of the contents, please visit <a href="http://www.magcloud.com/browse/Issue/3629">MagCloud</a>, where you can also purchase the printed version for just $9.95.