Today, I came across a reference to a 1970s/80s US Navy research program for a missile called the Advanced Surface-to-Air Ramjet (ASAR). It was described in a 1992 JHU APL TechDigest Vol 13, No 1 article titled "AIRBREATHING PROPULSION FOR DEFENSE OF THE SURFACE FLEET," by J.L. Kiersey.

ADVANCED SURFACE-TO-AIR RAMJET
An advanced surface-to-air ramjet (ASAR) missile design was initiated in 1974 for the Naval Sea Systems Command. It was a subsonic combustion ramjet based on current technology rather than that used in earlier Talos and Typhon LR program. The ASAR has an integral-rocket-ramjet engine in which a single combustion chamber is used for both the solid-rocket boost phase and the liquid-fueled ramjet sustain phase (Fig. 15).

The ramjet has four axisymmetric supersonic air inlets located in the compression field generated by the nose of the missile. The air is ducted aft and dumped into the forward end of the combustion chamber through air inlet ports. During the boost phase these inlet ports are blocked with glass port covers, which are frangible glass and are removed with explosive charges at the end of boost to permit ramjet takeover. For ramjet operation, fuel is injected from wall injection nozzles just forward of the dump station and ignited with a hot-gas igniter. The ramjet exit nozzle at the end of the chamber has an ejectable insert with a smaller throat size required for rocket operation during boost (Fig. 16).

A ground test program was carried out to develop the air inlets and combustor configurations with heavy-weight hardware. The combustor was tested at the APL Propulsion Research Laboratory, the air inlets in wind tunnel facilities, and a flight-weight engine/missile was designed from this information.

Following the heavy-weight program, a prototyping program was carried out on a flight-weight integral-rocket-ramjet combustion chamber design under the technical direction of APL, with assistance from Hercules, Inc., Alleghany Ballistic Laboratory (ABL) on the booster rocket and combustion chamber and Bendix Aerospace for the ramjet fuel control. The objective of the prototyping effort was to demonstrate the durability and performance of the flight-weight rocket-ramjet combustion chamber in ground tests simulating flight and included firing the booster motor, transitioning to the ramjet configuration, and operating the ramjet system to simulate flight, all in a single test firing. Because most ramjet test facilities were not designed to allow for the hazards associated with testing large, high-energy solid-propellant rocket motors, APL constructed a ramjet air supply that could be installed at a rocket test facility.

The great effort involved in designing, constructing, and proving-in this air supply system was accomplished at the APL Propulsion Research Laboratory. At the same time, Hercules was designing, fabricating, and static firing rocket motors, as well as preparing a test bay at ABL for installation of the unique air supply system.

The air supply system contained all the elements for storing, heating, flowing, and controlling the air required, as well as a specially designed transition (from rocket boost to ramjet operation) simulation device. A portable van assembled at APL contained all the electronics, instrumentation, and data acquisition to support the test, with the test sequence entirely computer controlled.

Using this technique, the ASAR flight-weight chamber for rocket boost-ramjet operation was proven-in, including boost rocket firing, transition simulation, ramjet engine ignition, and ramjet combustor operation simulating a full-duration flight. The program also included design and testing of a special exit nozzle with thrust-vector control. Completed in 1984, the ground test program successfully demonstrated the technology required for an advanced surface-to-air ramjet missile that is compatible with use of the Navy's most modem launching systems.
Click to expand...

Advanced Surface-to-Air Ramjet (ASAR) general arrangement. It is an integral-rocket-ramjet design with four
axisymmetric air inlets mounted in the forebody nose compression field and aligned with the local flow angle. The missile had
movable tails for control.
Click to expand...

ASAR showed up in the context of a Grumman Study of a 1990s hydrofoil combatant (yes, more on that to follow) and would have fit in universal VLS cells compatible with Harpoon and an Advanced ASW Standoff missile. It was broadly similar in size to Standard MR.

Sounds like a piece missing from "History of Ramjet and Scramjet Propulsion Development for U.S. Navy Missiles" pgs 238 - 240.

Sounds related to this: 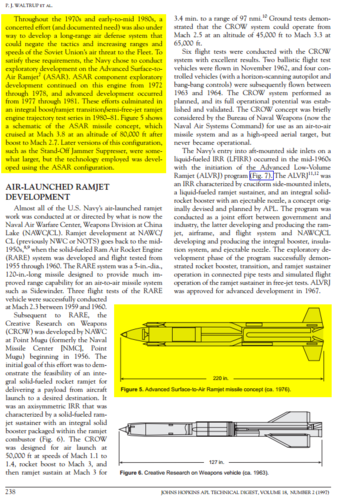