Maybe someone owns this issue ?
Luftfahrt International No.18 November-December 1976
There are drawings of various Messerschmitt Projects ?
Wildgans, Libelle, Wespe , etc ?
Maybe someone can show us these drawings ?

Many Thanks in advance

I've got a photocopy of that article. The vehicles are bizarre and unlike normal Messerschmit designs. Somewhere I read that the article is bogus... the author just made 'em up. Which wouldn't be surprising.
M

WOW COOL ! Thanks for the fast reply ! Maybe you can show us these "bizarre vehicles" ?

hi check out a website called www.luft46.com theyre in the messerchmitt section i think

... designs entirely unlike anything Messerschmitt was known to create... engine designs that don't seem to exist anywhere but in these drawings... desigsn that don't make a lot of sense...
T

Please dear Orionblamblam, could you scan and post (some of) them anyway, maybe requiring the Webmaster to transfer the topic into
Scale Modelling, CGI and Profiles
at http://www.secretprojects.co.uk/forum/index.php/board,14.0.html
(even not true, this is very pleasant and even wonderful for what-ifers like me, and several of us coming here)

Tophe said:
Please dear Orionblamblam, could you scan and post (some of) them anyway,
Click to expand...

Look at the four at the bottom... the "Libelle," the "Schwalbe," the "Wespe" and the "Zerstorer PII." The article also had a very different, very sad version of the P.1106, which is not shown on the Luft '46 site.

Note that the four shown have "names," not "numbers." Another odd difference from normal Messerschmitt procedure.

note that this "Libelle" look extremely similar to the "Lippisch" glide bomber
http://www.secretprojects.co.uk/forum/index.php/topic,5828.0.html

to http://www.luft46.com/mess/mess.html
the "Schwalbe," the "Wespe" and the "Zerstorer PII." look not like Messerschmitt design And drawings made from the articles drawings to illustrate a resin kit: 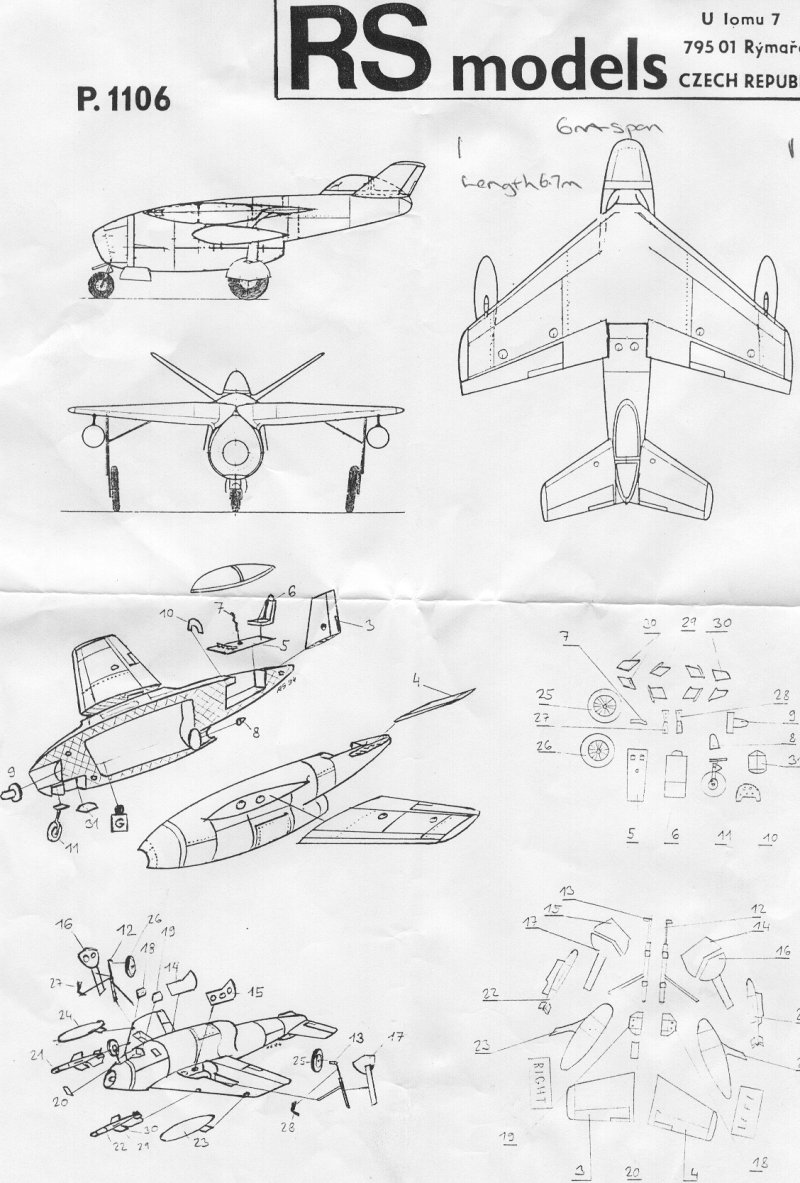 Clearly it resembles the known Me P.1106 concept, but it's a lot different.
T

Thanks for the replies.

Maybe someone can show us the WILDGANS ?
I have heard it should be a big jet-powered transporter or bomber ?
http://www.histaviation.com/Messerschmitt.html

Orionblamblam said:
This artwork is based on the articles "P.1106:"

At first glance I thought this was some sort of unmanned aircraft - the cockpit is almost missed back there in the rear.

Cool ! Thanks a lot Justo !

I have read that the Wildgans should have six jet engines ?
Is there also a Wildgans II ?
Any Data ?

Thanks a lot in advance
J

Yep, and all completely fake.
V

I do bielive to Luftfahrt International autor much more than You..Sorry

The only source to the existence of these projects is the Luftfahrt article, I believe, which is suspicious. All other mentions of it are by authors citing this article.

However, Mr Karl R Pawlas, the publisher (and writer) of Luftfarht International, was a well-regarded author and researcher of his era. He mostly reproduced original documentation in these publications, which was pretty unique in the 70s, so if these projects are fake, they were likely faked by someone else and passed on to Mr Pawlas as authentic. His general credibility has meant most subsequent authors have just regurgitated this information.

This kind of thing has happened more than once in "Luft 46" world.

I've no specific evidence that these are fake, or genuine, however its not my field of expertise.

In his article, Pawlas says: "The list of Messerschmitt aircraft designs produced during the Second World War has, despite diligent research, still a considerable number of gaps. From a former Messerschmitt employee, the author has been provided with some documents that were previously based on technical data and three-views that throw a little more light on the P.1106, P.1107 and P.1108 projects and some probably completely unknown designs. It remains unclear, however, whether work on these designs, which were apparently given animal names, was completed before the end of the war by Messerschmitt or after the surrender."
It's hardly a glowing endorsement and suggests a strong degree of scepticism even on the part of Pawlas himself.


Vladimir said:
I do bielive to Luftfahrt International autor much more than You..Sorry
Click to expand...

You are quite free to 'bielive' whoever you like Vladimir but your belief, unsupported by any contemporary evidence, is sadly not enough to make these designs real. I wish they were real - they're brilliant - but they're not wartime Messerschmitt designs.
W

I`m with you, Vladimir ! Just saying it`s a fake is not good enough. Karl Pawlas was a reference indeed, Overscan! I guess you scepticals have a lot of homework to justify your statements

Wurger said:
I`m with you, Vladimir ! Just saying it`s a fake is not good enough. Karl Pawlas was a reference indeed, Overscan! I guess you scepticals have a lot of homework to justify your statements
Click to expand...

The reverse is true. The evidence against them being 'real' is overwhelming. The Americans captured Oberammergau at the end of the war and subsequently arrested and interviewed Waldemar Voigt and all his designers. They spoke freely about their designs and many subsequently went to work for the Americans, including Voigt. None of them at any point mentioned any of the 'animal names' designs but there was loads of material on the P.1107, P.1108, P.1110, P.1111 and P.1112.
Then in the 1970s, 30 years later, a guy whose name we don't know gets in touch with Pawlas and gives or sells him material of an unspecified nature which purports to give information about previously unknown Messerschmitt types. The guy tells Pawlas that he worked for Messerschmitt.
Pawlas, renowned for printing original drawings, does not appear to do so on this occasion.
The drawings printed in Luftfahrt lack info panels, drawing numbers or any other company-specific markings. They don't have project numbers even though every other Messerschmitt project was given one, or at least a utilitarian descriptive name like 'Three-seater Night Fighter', '1-Jet-Fighter' or 'Long Range Bomber'.
The outline of the jet engine shown in each case fails to match that of any German WW2 jet engine; most lack any sort of weapons installation information; they have oddly-shaped canopies that are entirely unlike those on any other Messerschmitt type, their undercarriages are similarly unfamiliar. In short, they look 'wrong'.
And to top it all, Pawlas says he's not sure whether these are wartime designs or designs drawn up after the war.
If the mere fact that Pawlas printed them at all is the only evidence of any sort to be found anywhere in the world that they are real then, case closed.
Besides Pawlas, what is it about the drawings that convinces you they are genuine?

I defunct the Libelle in this forum
because the guy who fake it, use very odd German word combination and spelling errors a German not make...

Wurger said:
I`m with you, Vladimir ! Just saying it`s a fake is not good enough. Karl Pawlas was a reference indeed, Overscan! I guess you scepticals have a lot of homework to justify your statements
Click to expand...

Thanks, Wurger! B)
V

And the nameless heavy interceptor from the same issue...
Interesting, that all guys, why told "fake" "fake" "fake" did not post drowings itself on moin1900 request...

Vladimir said:
And the nameless heavy interceptor from the same issue...
Interesting, that all guys, why told "fake" "fake" "fake" did not post drowings itself on moin1900 request...
Click to expand...

Sorry, I don't understand that. Could you explain please? Why is that interesting? And as I said, please also explain the features of these drawings that convince you they are genuine.
L

If one reads - Unknown ! Postwar 'discoveries' misinterpretaions and mysteries - the last chapter
of "Luftwaffe Secret Projects of the Third Reich" by Dan Sharp,Morton Media
one wil see that even Karl L.Pawlas had his misgivings
about these 'designs'.. (page 125)

This topic was dormant for almost 7 years before you resurrected it, Vladimir. At the time, I didn't have the drawings, so it was impossible for me to post them. People who did, probably had better things to do than scan photocopied drawings of dubious provenance.

If your view of research is based on Wikipedia rules ("it was published in a book so it must be true"), then please accept that serious researchers and authors worth reading have a different view, which is to go to primary sources first. Secondary sources can be wrong, which means you repeat their mistakes. If secondary sources make extraordinary claims, they must be subjected to serious analysis and verification where possible. Especially where the secondary source itself expresses doubts about the material presented.

The drawings do not show any signs of being originals, so, BEST CASE, they were redrawn by someone based on a real original drawing of a design that actually existed and is now lost. Equally, they could be redrawn with faulty memory by a former engineer who had no actual documentation, they could be drawings a former engineer did in the evenings in 1948 after coming home from his job in a sausage factory which he sold to an aviation collector as genuine to buy his kids new shoes. They could be simply made up by someone who claimed to be an ex-engineer.

Without corroboration, there simply isn't enough evidence to conclude they are genuine.

Firstly, I need to stress I'm no expert on this era of aviation (and rarely even view this section of the website) but if one looks at the projected side area of the V-tail of the design known to be genuine (and has an understanding of aeronautical engineering) one can easily imagine that it would be stable in yaw.

If one now examines the 'doubtful' one, one would have to wonder how stable in yaw that design would be (insufficient projected area). Not in itself proof but a small nail in the coffin, maybe..?
B

Just move the topic into Speculative projects subforum and be done with it.

Not a bad idea, I think. This section contains not only fakes and unreal designs,
but also those, which never had a chance to be realised and maybe were never
meant to. IF real evidences will surface, such topics can be moved back, of course.
We had discussions about such designs before several times and maybe it's helpful
for newer .members to hace a look at those old topics. Will try to locate them and
post them in a seperate topic. .. when I'm using a proper keyboard again and not just
A smart phone. :-\
V

Manfred Griel also think that Zestrorers projects was started in Germany in march 1945!

And Did someone have more info about Zestrorer I concept?