Beautiful project! Much more so than the Viking in my opinion... :
G

Does the top of the vertical stabilizer fold?

gral_rj said:
Does the top of the vertical stabilizer fold?
Click to expand...

Most probably explanation, as the hinge lines of the double wing-fold are shown
with the same lines.

Can anyone identify one of the concept models as the McDonnell Douglas MD-893 VSX proposal?
C

Triton said:
Can anyone identify one of the concept models as the McDonnell Douglas MD-893 VSX proposal?
Click to expand...

Both these spotting models appear to have quite different profiles. I think we are looking at (Qty.1) each of the McAir Model 201 and the McDonnell Douglas MD-893. These photos deserve to be moved to the regular VSX topic, now that the eBay auction is over.

Just posted at Flickr by the San Diego Air & Space Museum (SDASM) (albeit at a maddening low resolution) a photo of an exposition display board touting Convair's VS(X) proposal (Convair Model 21), featuring one of the illustrations posted by Orionblamblam earlier in this thread (Interestingly with differing tail art and Modex number!), as well as a photos of the mock-up's cockpit and wind tunnel testing.
http://www.flickr.com/photos/sdasmarchives/23696780056/ 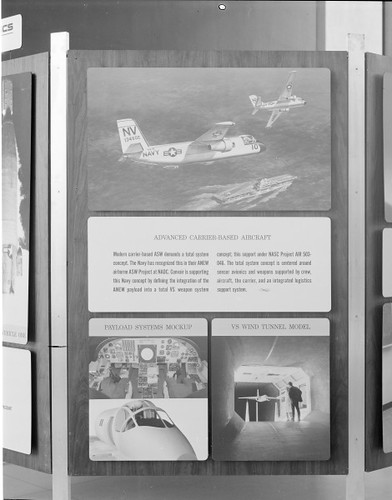 From the SDASM Archives, a Lockheed wind tunnel model for the S-3 design. Interesting details and to me shows again the strength of Vought's expertise in the results of the Lockheed S-3 design as produced. 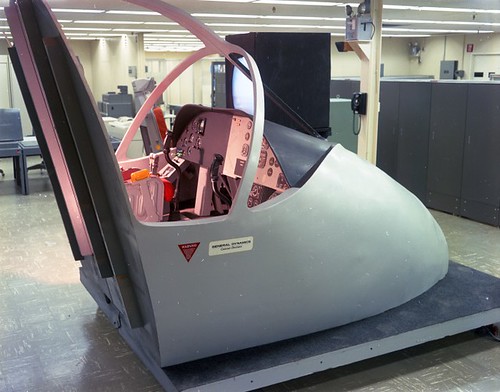 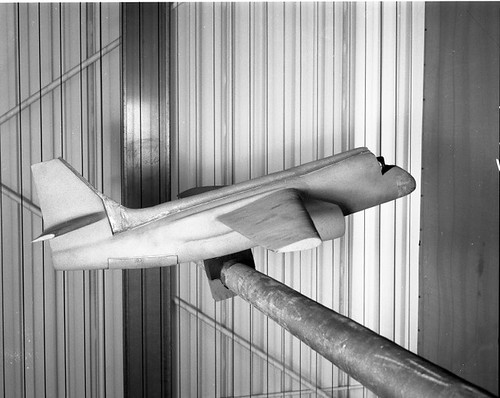 From the collection... an assortment of VSX in-house models, some wood, some resin and some strange looking like the Convair. Enjoy.

Most excellent - thanks! Mark
P

Found this interesting information pertaining to the Specific Operational Requirement for the VSX at http://www.lockheedmartin.com/us/news/features/2016/C1S3VikingPilot.html


This was the genesis of the Specific Operational Requirement, or SOR, for the VSX program that was released to industry in late late1966. A formal request for proposal was answered by two industry teams in April 1968. The team of Lockheed, LTV, Sperry Univac and GE competed against Grumman, IBM, and General Dynamics. Final bids were submitted in December 1968 and on 4 August 1969, the Lockheed team was declared the winner.
One of the unique and ultimately successful features of the S-3A contract was that it was a fixed price development contract incorporating a target price as well as ceiling. It was milestone based, with fixed dates for each of some eighteen major program milestones, one of which was the first flight date of the first prototype aircraft. The production contracts were also fixed price which significantly overlapped both the development and production lots of aircraft.
To the amazement of many people in both industry and the military, the Lockheed team met or beat every single milestone in the contract and came in below the ceiling price for every phase of the development and production contract lots. Crew training started on schedule and the program met its initial operational capability, or IOC, date with the aircraft carrier deployment on schedule.
Reaching these milestones was no small task considering virtually every element of the S-3A was a new development and included the following requirements:
Completely new airframe
Completely new and first high bypass ratio turbofan engine in this class
First application of an airborne central digital computer and fully integrated avionics system
First sequenced, four-crew ejection system with zero/zero to 450 knot capability
Single engine bolter at max carrier landing weight with gear and flaps down
Fully Automatic Carrier Landing System, or ALCS, with autothrottle delivered at IOC
Inflight refueling
Ability to carry and deploy sixty search stores
Two internal bomb bays and two wing stations capable of carrying conventional bombs, torpedoes, depth charges, and nuclear weapons
Meet MIL-SPEC Flying Qualities requirements with no stability augmentation throughout its entire flight envelope from 90-450 KIAS at sea level
A fully automatic or electrically selectable manual back up, or EFCS, flight control system
Ability to descend from 30,000 feet to the surface in two minutes
A ground and in-flight operational auxiliary power unit for self-contained operations and engine starts
The approach speed of an A-6 with the sink rate design of the A-7 attack aircraft
Foldable wings and vertical tail to fit an <i>Essex</i>-class aircraft carrier
First non-paper trace system of analyzing submarine acoustic signatures on a CRT projection
Eight YS-3A prototypes built. John Christianson and I made the first flight of the first prototype (Navy Bureau Number 157992) on 21 January 1972. The aircraft was trucked from Burbank, California, where it was built. The ninety-minute flight came from Air Force Plant 42 in nearby Palmdale. Three months later, in April 1972, the Navy ordered the first thirteen production aircraft.
The first operational delivery took place to VS-41 in NAS North Island, California, in February 1974; less than two years after the first flight of the first prototype and only four-and-one-half years after the Lockheed team had been declared winners in the VSX competition. A total of 187 aircraft were built and the last was delivered to NAS North Island in August 1978.
Click to expand...

Just stumbled across this, which I thought very interesting and relevant:

Article entitled "Grumman's Guardian", by Corwin H. Meyer. "Corky" Meyer was a Grumman test pilot from the 40s to the 70s, and later went on to work the business end of the company. I've been reading his stuff for a few years, and he knows what he's talking about. The article details the development of the AF Guardian, Grumman's first purpose-built ASW aircraft. He traces the program from its origins in modified TBF Avengers, to the aircraft's eventual replacement by the S2F Tracker. An epilogue to the story talks a little about the VSX proposal.

"Arrogance ends the Grumman ASW monopoly
After building 11,489 Anti-Submarine Warfare Avengers, Guardians and its follow-on S2F twin-engine Trackers, Grumman lost the next ASW carrier aircraft competition on August 1, 1969, to the Lockheed S-3A Viking. Although I was no longer director of business development, I was sent by the Grumman president to Washington to find out why. A former Navy friend allowed me to read the decision paperwork. It stated, "The Navy expected Grumman to win after their continuous 28 years of supplying the Navy with excellent ASW aircraft.
Because of Grumman's pompous attitude expressed in their very skimpy proposal, they were rated 25th in a five-company competition!" I went home and read our proposal. It was a "Send us the money and we will make you the next ASW aircraft" - a real ego-trip dud by Grumman. This team from engineering was never allowed to do a preliminary design again."
Click to expand...

Going through some of my old files of unidentified planes I came across the following two illustrations. Are these versions of the McDonnell Model 201 VSX?

Would agree with you RAP though I had not seen a drawing/art with the unducted fan before.

I went to an estate auction for a retired McDonnell Douglas engineer and bought a number of interesting drawings, photos and documents. The attached photos are of the mock up for the forward fuselage of the Model 201 which was McDonnell's entry for the VSX proposal. The last photo of the instrument panel is not from the same photo series and frankly, the date stamp on the back of the photo is wrong or it is for something else entirely. I cannot think of any twin engine design/proposal in the 1981 timeframe. I don't think the canopy frame arch quite matches up either though a camera lens may distort that to some extent. Open to any suggestions....

Does anybody even build mockups anymore? :'(


sferrin said:
Does anybody even build mockups anymore? :'(
Click to expand...

sferrin said:
Does anybody even build mockups anymore? :'(
Click to expand...

Yes, Sikorsky did with the Raider, although the production version was markedly different. Although, I also get what you're saying, and I now think when it's done, it's done more for marketing than engineering.
E

Instrument panel from their VSTOL-A effort?

sferrin said:
Does anybody even build mockups anymore? :'(
Click to expand...

Yes, Sikorsky did with the Raider, although the production version was markedly different. Although, I also get what you're saying, and I now think when it's done, it's done more for marketing than engineering.
Click to expand...

I think Sundog is right, nowadays it's probably more of a marketing exercise. The goal being to get a cool looking piece of plywood fiberglass at Quad-A to get a general to sit on. I doubt those are bona fide engineering mockups, intended as tools useful for making design decisions. I too decry the extinction of the mockup, although i'm sure CATIA people will say digital mockups are just as good if not better.

I'm guessing someone has already gone VR for a aircraft walk through....

Here's the artwork, in color, that is in Reply #48 on the display stand. SDASM archives.

Hope that I am not 'too late to the party' on this thread. Great insights here, thanks to all who have posted.

I have been contracted by Schiffer Publishing to write the S-3 Viking chapter of their "Legends of Warfare" series. While I am decidedly an A-7 bubba, I guess there is enough commonality and shared DNA with the War Hoover for me to give it its due.

Would love to get high-res scans of these VSX proposals to include in my book. Of course, all contributions would be credited. If any of you have high-res scans of your previous posts (or any other relevant items), feel free to send them on! Address is a7ciia@gmail.com. Thanks in advance.