The follow on design to the Trafalgar SSN was to be the W-Class, I believe that cost of developing a new hull form was to great and it was decided to evolve the Trafalgar class and take into account design concepts that came from the vangaurd class SSBN. A drawing was shown in JDW indicating a sail placed well forward. I have been noughty and created a impression of what that may have looked like - so it is a fake not a real impression.

Seems an odd place to put the sail. The control rooms would be right over the torpedo rooms unless they are aft of it. Why is there some much room aft of the sail? Maybe there is a VLS system there, certainly the PWR would not take up that much room.

I'd not heard of this design before, thanks for sharing Jazz. I hope somone has some info, you could try posting over at Warship Disscussion 3.0, someone there may know more.

Actually the relocated Sail was viable due to them plannning in using remote semsors and periscopes, so the control room would still be in the heart of the sub the the information fed digitally to screens. Not sure why they moved it forward, possibly fo better underwater performance and maybe include an automatic loading system when rearmining.

I think the ideas got too grand so went with Astute instead.

JAZZ said:
The follow on design to the Trafalgar SSN was to be the W-Class, I believe that cost of developing a new hull form was to great and it was decided to evolve the Trafalgar class and take into account design concepts that came from the vangaurd class SSBN. A drawing was shown in JDW indicating a sail placed well forward.
Click to expand...

The W-class seems to have sprung from the same late-Cold War school of thought as the American Seawolf class. The ASW mission dictated as very large diameter pressure hull, which allowed for exceptional silencing measures, such as "raft mounted" machinery.

Since even the United States could only manage a 3 ship Seawolf production run, it is easy to see why a very large, high end Cold War specialist design was cancelled in the UK.

Did any details accompany the drawing?

I have always had the impression the W-class amounted to a SSN derivative of the V-class SSBNs? The forward mounted sail is an unexpected detail, but Thorvic's explaination is entirely reasonable. The only mystery is why non-penetrating mast technology hasn't had a greater effect on the configuration of extant submarine classes?

Silhouette was from JDW 4th Feb 1989. It was expected to be of similar design to US Seawolf. Was to use PWR-2 reactor with an output of 22 500hp plus and use a designated sonar 2078.

"Since even the United States could only manage a 3 ship Seawolf production run, it is easy to see why a very large, high end Cold War specialist design was cancelled in the UK. "

The Seawolf design was terminated because the US Congress was up in arms over the cost of the ships, not taking into account how long it had been since the US had produced a new class of subs. They directed the Navy to develop a less expensive submarine. The contract for two Seawolf class subs had already been let. Pres. Clinton chose to allow the construction of the third one to proceed (although it was highly modified for other missions) in order to use the long term items that were already paid for, to insure that there would always be at least one Seawolf available at all times, and because frankly without it there would be such a gap in SSN production that the irreplaceable skills and infrastructure would disappear and the US might not be able to afford to ever produce an SSN again.

Although it could operate in the littorals, the Seawolf class was optimized for blue-water Cold War operations and multi-target operations. It was very fast, highly maneuverable and heavily armed. In fact, the reason it has eight 660 mm tubes instead of the US standard four 533mm was to engage multiple targets without having to wait for reloads. Although it is said that the reason for the 660mm size was so that fish could "swim" out quietly. While this is true, there was another reason: When first designed it was feared that the newer Soviet subs were strong enough that existing torpedoes would have a much lower probability of sinking them, even with a close detonation. A new class of larger torpedo was to be designed to deal with this. This torpedo program was canceled, but the Seawolf design was too far along at that point to bother going back to the smaller tubes. Seawolf could also dive very deep in order to pursue Soviet subs. The Seawolves were also very quiet, and had a high "tactical" or "quiet speed. In fact their "quiet" speed" was faster than the top submerged speed of most conventional subs.

Ironically, because of inflation and the cost of designing a whole new class, not to mention the slow rate at which they are being ordered, it's not likely that much money is being saved by buying the new Virgina class SSNs. Compared to the Seawolf class, they are slower (although apparently significantly faster than they were expected to be), don't dive as deep and aren't as heavily armed. Their propulsion systems are much less powerful. On the other hand, they are more versatile, take advantage of improvements in technology developed since the Seawolf design was finalized and can operate more easily in the littorals. They do retain the Seawolf quietness and their quiet speed is probably equal to that of the Seawolves, even though their high speed cruise and top speeds are lower.

I came across some data elsewhere that may also explain what happened to the W class. Because the UK allowed a gap to grow between submarine designs, engineers in this field went elsewhere and the UK lost this expertise. AS a result they could no longer do the advanced design work by themselves and had to go for a more incremental design with design help from the US.

To avoid a similar situation is why Pres. Clinton allowed the third Seawolf to be built. The US is now facing a similar situation. Work on the design of the "Flight 2" version of the Virginia class is over, and there is real concern that unless the US starts design work on the next class of SSNs, we will also lose the expertise to produce a new design SSN (actually, it would become practically unaffordable to do so because there would be so much you'd have to recreate.

The "W-Class" was also known as the SSN20 project. Feasibility studies began in 1986 and were completed by 1989. A design contract was placed with VSEL (Vickers Shipbuilding & Engineering Ltd) in 1987, but with the end of the Cold War the project was cancelled in 1992.

Apparently, the primary bow sonar was to be designated Sonar 2078, it would have used the PWR2 reactor (rated at 22,500hp) in the Vanguard class and the unit price was upward of £400 million (without R&D) in 1990. It would also have used optronic masts (as found on Astute) with extensive use of fibre optics for internal networking. Apparently silhouettes were released and it would have had a pronounced "whale" shape. At the time the class was concieved RN force planning for submarines appears to have solidified around a fleet of 18 SSN's (Swiftsure, Trafalgar and SSN20) and 8 SSK's (Upholder), There was then a brief period post cold war when the RN pushed back the order date by 3 years with the intention of using SSN20 to replace the Swiftsure class in a 12 boat SSN fleet. Eventually SSN20 was cancelled outright and replaced with Trafalgar Batch II which evolved into Astute.

Jane's was reporting circa 1990/91 that a class of seven SSN-20/W-Class boats was planned with the first to be ordered in 1990. This is curious as along with the seven Trafalgar class boats and six Swiftsure class it would have provided a fleet of 20 SSNs which in turn suggests the 18 number had been revised up. Twenty SSNs plus eight Upholders would have roughly matched the 27 attack boats the RN was given as having in 1989/90.
V

A former colleague worked on Trafalgar then W, before moving to Horizon, Type 45 then emigrating to Australia to work of the new submarine project and finally the projects I worked on with him. Basically as project after project was rescoped, delayed or cancelled, the experienced teams were split up and the people moved on resulting in many of the schedule and cost issue that have arisen once orders for new designs finally went through. The politicians are then shocked and horrified that the companies that once efficiently and competitively designed and built ships, submarines and weapon systems have difficulty getting back up to speed after a decade or more gap in orders.

It would be interesting if someone actually ran a detail analysis on whether its cheaper to stop and start design, development and builds every generation or rather instead do a continuous build of incrementally improved batches with a pretty much new design every three batches.

You want obscure details? I gots obscure details. Three contenders for the optronic non-hull-penetrating mast for SSN20, as shown at RNEE 1989. From left to right: Dowty/Kollmorgen; Pilkington/Logica; Plessey Naval Systems. Requirement noted to be "very demanding", including HDTV, LLTV, IR, ESM and comms on a single mast, with automatic wave-following. Reference: IDR, 11/1989 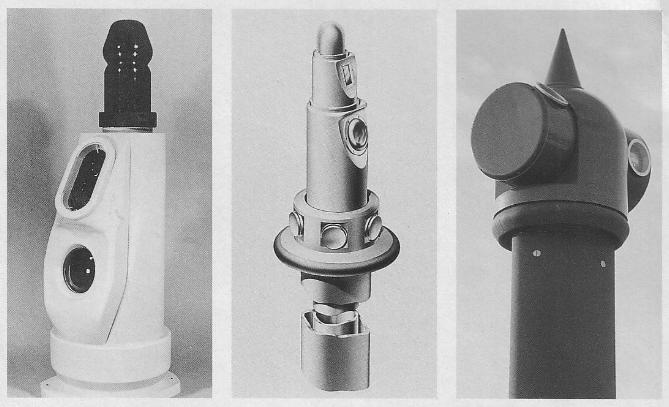 Regarding data for the “W” class project, the following came from the addenda of a copy of Combat Fleets of the World from the 1980’s.
I appreciate that these are ‘guesswork/estimates’, and there was no source for data quoted...

Interesting how different they are for the same spec.

Hoping that there might be more light shed on the 'W' Class/SSN20 Project in Friedman's "British Submarines in the Cold War Era".
Unfortunately, release date seems to have been put-back AGAIN! Now showing as 31st March 2021 on Pen and Swords website.

Oh this is what you were talking about on twitter a few weeks ago!

Pen and Sword have put Friedman’s book back to the end of June now! 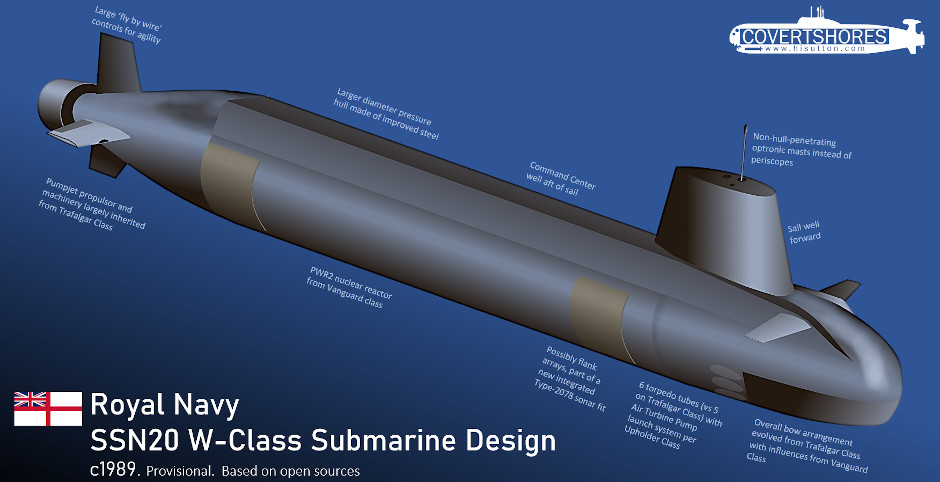