All in the title.

The year is 2030 and the F-35 while it has improved, still has the basic flaws that saw, ten years earlier in 2020, a remarquable return of the F-15.
Except such return is no longer possible by 2030, yet USAF still suffers from accelerated retirement and attrition of the late 4th generation combat aircraft: F-15EX and F-16 block 70.

And so USAF looks for another "miniature, multirole, less expensive F-22 sidekick".

Because of international emergency and all kind of internal difficulties, designing a whole new fighter from scratch is not possible.

...and thus the one and only left is South Korea KF-X. And the impossible happens: in a way rather similar to the F-15EX procurement, USAF decides to procure KF-X as an "in between" the too few F-22s (barely 170 left by this point) and the definitively flawed F-35.

150 KF-X are procured... and in turn, this is a turning point. Because it has a lot of US DNA including the F414 engines - the KF-X got US blessing for massive export sales once planned for the F-35 that never happened. In a sense it become the third US fighter, the middle option between the other two.

USAF is Marcus Aurelius: aging, in need for a valuable successor and frustrated by the former, it screws it and adopt the latter. Of course this led to... tensions down the road.

That we'd better get a working FCAS by then... although I'm starting to get the distinct impression this one is going for a repeat of the Rafale /Eurofighter split.
A

What makes the KF-X so intriguing and interesting... it looks like a F-35 "done right".
With Superbug good enough, modern engines having a better airframe around them.

Let's real back history to the early 90's, 30 years ago. When Dick Cheney screwed the F-14D and then everything went down the drain - NATF, Superbug, JAST...

Basically, a naval KF-X would be...

Remember how the USN couldn't get an "ideal" naval fighter out of NATF, F-14B, Hornet and Super Hornet ? and then they got the single-engine F-35.

A naval KF-X falls right into a "sweet spot" between NATF, Super Hornet, Tomcat, Hornet and JAST - to replace them all, the right way.
-Stealth like a NATF and JAST - except it fells right between the two - not too big, not too small
-Twin F414 like the Superbug, except with a lighter, smaller, and stealth airframe around these engines. Including weapons bay to reduce drag and help stealth.
-Twin F414 unlike the JAST / F-35
- not compromised by VSTOL for the Marines

- But KF-X also looks like a F-35 done right, for USAF
- stealth and twin engine like a F-22, except smaller and cheaper thanks to the less advanced F414
- making it (another) decent F-15 successor at lower cost (goodbye, F-15EX) A low-end, miniature F-22 !
- better than a single-engine F-35 compromised by VSTOL for the Marines

Another way to see it is to consider the KF-X as
- a "downrated F-22" to cut costs for USAF and allows full replacement of F-15s;
- an aircraft designed around the Super Hornet twin F414 engines powerplant - to save money and makes a little more attractive to the USN. 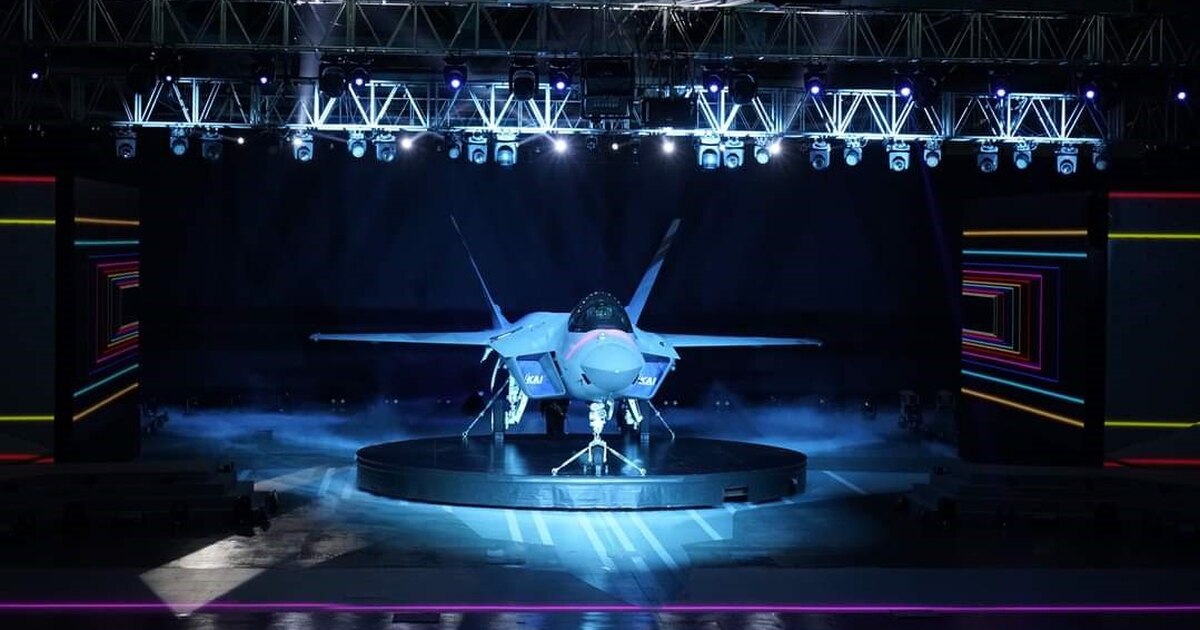 The prototype of the twin-engine jet, named the KF-21 Boramae, was showcased during a rollout ceremony at the headquarters of KAI in Sacheon, South Korea.

I've discussed the matter in the other thread. I can see a "niche" market for it as Lockheed "twin jet option" above the F-35. They could tolerate it, and so would the State Department. South Korea after all is a staunch and reliable ally.

Drat, never realized before but... with the Superbug and F-15EX being old tech, the F-22 stopped in 2009, and the single-engine F-35, America has no twin jet fighter option in the next future. No stealth one at least.

Typhoon and Rafale are not 100% stealth, only reduced-RCS.