Nord NIL.1 :was single seat interceptor of canard aircraft project,
powewred by one Nene turbojet engine,Span 7.50m ,Length 11.50
it was designed in 1953.

The hardest word to define is 'Normal'

I'm looking for drawings, or mock-up/model photos of the Nord N1L1/5000/5010 Harpon,
which could give details of the landing gear, and perhaps, if this landing gear would
have been supplied by Messiers (Couldn't find it in http://www.acam.asso.fr/histo/,
but a very good link, thank you Hesham !). Apart from interest in the Harpon itself,
I think, that this type could have been similar to that, for the Payen Pa.57. Looking for
example at the SE.212, N.1500 and SO.9000, I think, that a basic typ was often just
adapted for several types of aircraft. Just an assumption, of course, but I hope, at least
a plausible one ... :

Nord NIL.1 - I am interested in it. Is any other info available?

By the way
here the original boxart for the harpon kit; 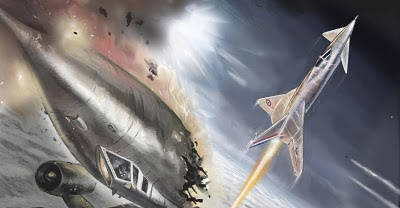 What aircraft is being destroyed on that original boxart for the harpon kit?
Edit: I presume it is the Myasishchev M-50 due to front part and engine pod on the starboard wing tip.

"Historical
In 1953, the Air Force launched a light interceptor program, capable of Mach 1.3 and powered by jet engine, rocket engine or both. It must also be able to operate from poorly prepared grounds.

Dassault, Morane-Saulnier, Nord-Aviation, SNCASE and SNCASO are responding to this project with the MD 550 Mystère Delta, the MS-1100, the Nord 5000 Harpon, the Durandal and the SO-9000 Trident, respectively. Breguet would also have responded with Br.1002.

The competition will ultimately be won by a much improved version of the Mystery Delta, the Mirage III. The Durandal and the Trident were built, but only as prototypes. The Br.1002, the MS-1000 and the Nord 5000 were very soon abandoned, before the construction of a prototype.

The Nord 5000 was first known under the designation NIL-1 (Nord Intercepteur Léger 1), with a single rocket engine (or even a Nene jet engine) and a maximum takeoff weight of 6000 kg, 11.5 m long and with a wingspan of 7.50 m. It was thus declined until NIL-6.

It presented itself as a double delta wing interceptor and duck planes also in delta. The wings were far behind the fuselage while the duck shots were very far forward, under the cockpit windshield. These wings had a partition. The triangular fin recalled that of the Gerfaut. The concepts show a wing root either high or median.

Two variants were considered, one with a 1500 kgp SEPR rocket engine, the other with a twin-engine.
The air intakes were lateral and rounded, very aft of the cockpit.
During the time of its study, between 1952 and 1956,
the jet engines envisaged were a Nene (2200 kgp approximately) then an Atar 9 for the single jet engine version,
two Gabizo (1500 kgp each, at least in theory) then 2 Orpheus 12 for the twin-engine version.

An arrow wing variant, the Nord 5010, was also planned.

The Nord 5000 was built in the form of models, intended for wind tunnel tests. 4 models were built at 0.42 scale to be dropped from an airplane, and exceeded mach 1.6 while only Mach 1.3 was expected. The Nord 5000 was slightly larger than its competitors. Nord tried to force the authorities to develop it at least as an experimental plane, intended to explore the flight at sustained Mach 2 (more than 5 minutes).