Shin Meiwa, now ShinMaywa, “GS” (for Giant Seaplane) from 1977. The GS was an amphibian airliner designed to carry 1,200-passengers on three decks. 344 passengers on its upper deck, 626 on the main deck, and 230 on the lower deck. Payload was estimated at 120 tons.

Six advanced, high-bypass ratio turbofans of about 77,000 pounds of thrust would be needed to power this mammoth flying boat. For enhanced STOL capability, the engines would exhaust air over the wing's upper surface in a propulsive lift concept similar to the Boeing YF-15. To that end, engines would be mounted above and forward of the supercritical wing. An advantage of this arrangement is that the engines are out of spray range and thus safe from flameout due to excessive water ingestion.

Purchase price was expected to be $60 million in 1977 dollars.

There's been a revival of interest in the concept of giant jet powered seaplanes (for the most part, for the carriage of cargo) in the last 12yrs or so.
S

The Shin Meiwa GS as seen in a thesis called THE USE OF SEAPLANES AS AN ADVANCED WEAPON SYSTEM, by Algeu Kreniski, September 1988:

I can't find any information about this surprising giant flying boat project in Japanese sources. :-[

Hi my dear hesham! Please visit Hiroshima（広島） and Miyajima（宮島）(Itsukushima（厳島 : another name of Miyajima）).

Wow! Thanks. GS, MS and SS-X. We had to find MS specification, SS-X specification and SS-X three side view drawing.

Wow! Thanks a lot.
http://wpedia.goo.ne.jp/enwiki/ShinMaywa
In 1977 Shin Meiwa had several ideas for it's STOL flying boat concept on the drawing board but none were ever built. They were the Shin Meiwa LA (Light Amphibian), a 40 passenger light amphibian for inter-island feeder service; the 400 passenger Shin Meiwa MA (Medium Amphibian); the Shin Meiwa MS (Medium Seaplane) a 300 passenger long range flying boat with its own beaching gear; and the gargantuan Shin Meiwa GS (Giant Seaplane) that has a passenger capacity of an astonishing twelve-hundred (1200) passangers seated on three decks! Unlike the Shin Meiwa LA and MA which were like the US-1 in design the Shin Meiwa MS and GS had it engines located in front of and above the wing like the USAF Boeing YC-14 to give STOL effect. In the end, none of the four designs got beyond the drawing boards.[1] Recently however, there has been a revival of interest in the GS concept.

Also during the late '70s, Shin Meiwa were working on a successor for the PS-1 ASW seaplane, however the program, along with further orders for the PS-1, was cancelled in September 1980. This was because land based aircraft (i.e. P-3C) seemed to had alleviated the need for more seaplanes for Anti-Submarine Warfare.

There were at least two PS-1 spin-offs. These (landplane) designs were Design #487 and Design #487C, part of a joint program of the 1970s with Grumman. Design #487 was aimed at a US Military STOL transport requirement, while Design #487C was a 90 seat commercial STOL airliner version aimed in particular at American Airlines.


LA wing tip shape looks like H7Y1's one?
According to MS 3-side view drawing, it's very hard to acommodate 300 passengers.

Hi GS!
Any one please combine these drawings.

So our next question is "what is MA?"
This one? Too small? 400 passengers is mistake?


blackkite said:
Any one please combine these drawings.
Click to expand...


Studying the comparison chart of Shin Meiwa projects, that you prepared, I wonder - what is the green giant hydroplane in the middle?

Silencer1 said:
....- what is the green giant hydroplane in the middle?
Click to expand...

Oh my! Gobsmacked! Thanks for posting Jemiba and blackkite concerning the Kawanishi KX-03. Somehow missed that one.

royabulgaf said:
I did a bit of cypherin' based on the B-36 wingspan vs the KX-3. The wingspan is about 2.5 times the B-36s. Cubing this, I get a KX-3 volume of 16.625 times that of the B-36. Assuming similar construction methods and a B-36 gross weight of 130 tons, I get a weight of over 2000 tons. This is somewhat generous, as due to the square-cube law, construction would have to be sturdier. With a wing area of 443 sq meters, you get about .3 tons per square meter of wing loading. The KX-3 wing loading would be about six times as much. Am I missing something?
Click to expand...

There is a sharp opinion about this 500ton flying boat like this.
Kawanishi GS's gross weight is 472ton.
Sorry for off topic.
S

Dear Jemiba, thanks for link!

Is this topic appropriate for some advertisements of Shin Meiwa company?
I could post some stuff here, which could be subject of interest to forum members.

Is this topic appropriate for some advertisements of Shin Meiwa company?
I could post some stuff here, which could be subject of interest to forum members.
Click to expand...

I'd love to see it
S


Two leaflets - on US-2 search-resque amphibian and it's planned (on the moment of publication) fire-fighting version.
I didn't find any date on this booklet thought


I'm very impressed with the fact, that in our time large flying boats have been extensively used for life saving, sea rescue and fire fighting operations, then for military purposes.
Canadair, Shin Meiwa and Beriev boats have been a good example of this.

Yes US-2 already saved many people under very bad weather. I also believe that US-2 water bomber and passenger transport type are very useful,too.


Actually, these information, in the current state, could be found on the company's web-site:
http://www.shinmaywa.co.jp/aircraft/english/


There were a lot of videos, photos - and a story of company predecessor, Kawanishi.

here is a more Info about LA,MA & MS.

Unfortunately I am unable to currently scan an article regarding the Shin Meiwa LA which was published in the Airdata File section of Air International. This was in the November 1977 issue and mentions that a possible collaboration with Dornier could have been on the cards. This was to counter any clash with Dornier's own projects at that time, such as the DO 24/72A. It also mentions within the article that Shin Meiwa were looking at the possibility of utilising the fuselage of a Fokker F.27, presumable to speed up the development process and adding the necessary hull for waterborne operations. Power was to come from two turbofan engines producing around 8,000 lbs (3632 kg) of thrust with possible candidates being either the GE CF34 or the Hamilton Standard/NASA QFT55 which was a derivative of the Lycoming T55 turboshaft (which itself did spawn a turbofan engine in the shape of the ALF 502) , as fitted to the CH-47 et al. The QFT55 was to be a quiet fan demonstrator.
Last edited: Nov 9, 2019
R

Mainland China would love to have Shin - M. GS to service “their” islands in the South China Sea.

Hi! GS. please click this picture or you can see larger image. 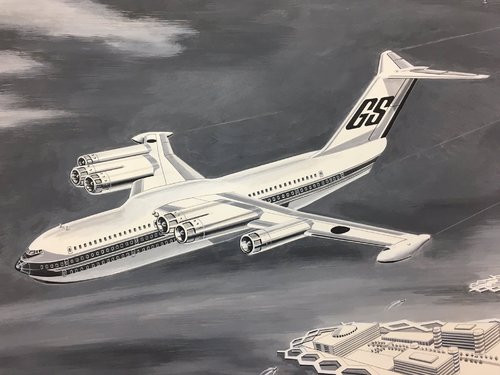 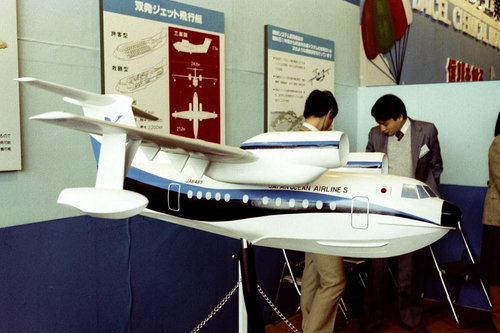 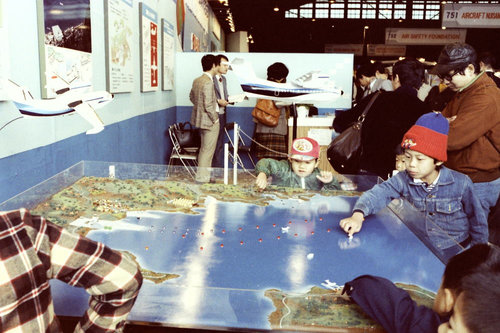 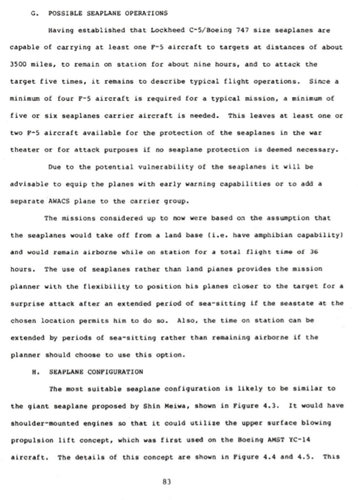 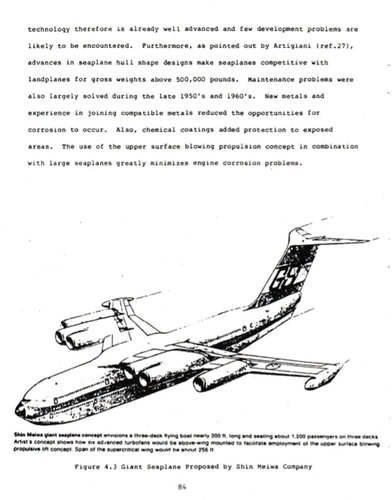 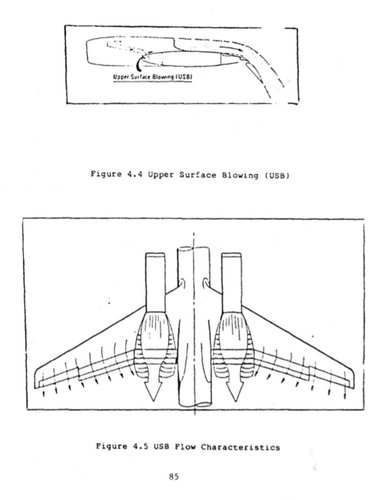