Shenyang J-11 as an unlawful copy of Su-27 - discussion

Russia has no questions to China about “copying” military equipment

"It is an accomplished fact. China is vigorously developing its defense industry, not without Russia's assistance, of course," he said.

The Soviet Union built about 3,000 enterprises, while Russia handed China licenses to make aircraft and components," he said.

"We handed over a large amount of know-how to China, including information related to the defense industry. It is not surprising that it repeats itself in Chinese products," he said.

Asked whether China has developed a fighter jet which it claims excels Russia's Sukhoi Su-33, Fomin said, "I can neither confirm, nor deny this."

"Concerning the Su-33, Russia did not deliver such planes to China. If our Chinese partners have them, they were not received from Russian sources," he said.

Fomin said Russia has no questions to China so far. "We have an agreement on the protection of intellectual property rights. If we uncover copyright violations, we will deal with this within the framework of the agreement," Fomin said.

but seems that Mikhail Aslanovich still has some questions unaswered
http://www.rian.ru/defense_safety/20100720/256683492.html

Russia has no questions to China about “copying” military equipment
Click to expand...

That's interesting ... actually very interesting, since it proves my "assumption" that this hype is more from the Russian press and other international "observers" than the designer and original manufactor !

However it also shows that either we really don't know the secret parts of the contract - from what is known at least I see some "questions" too esp. with the latest J-11BS and J-15 models - or Sukhoi and SAC has reached another way to deal with that issue secretly ... or Sukhoi and all the other associated companies ave given up ! (what I don't think !)

Latest (semi-officially) leaked pictures of the J-11B, BH and BSH including the WS-10A !

That's interesting: Sukhoi reports at Farnborough that "Russia has no questions to China about “copying” military equipment" ... but he makes a news-story from it !

Honestly ... Andrej Chang alias "Pinkov" is an "i...t". He usually mixes up different events, then he uses his imagination to create "News". A very special example was the reports on WS-10A-problems during this summer ... at a round the same time when several factory fresh WS-10A-powered aircraft were flying around. Otherwise a typical anti-China-bashing mixed by fear-making in some conservative US-circles ...

I remember once a "special offer" of J-10 factory-line pictures from CAC - I wanted to use the for the IAPR-feature - ... I'm not sure anymore but the price was horror .... and they were all well-known from several Internet-links. :-[


Typical Kanwa though: outdated "news" with half fetched "sources" as always

kanwa is famous for fake news. the editor is:

a chinese, who studied in japan and has a japanese wife, who took a russian name, that is a canadian citizen.

he doesn't even know who the hell he is, what can he say about china?
Click to expand...

must be the chinese copy of the onion news network :

So, the next round of discussion might be open with the unveiling of the J-16 prototype #1606 of Shenyang's "equivalent" to the Su-30MKK.

Follwong the sparse information available, it seems indeed to have an IFR-probe, WS-10A Taihang turbofans, a new radar (if the often mentioned AESA ???), the stronger front landing gear with two tires .... but the former Russian smaller wing-tip pylons.

I find the whole concept of the two former Communist superpowers at loggerheads over evil capitalistic breaches of contract to be nothing short of amusing, especially in the long historical shadow of the Tu-4...

Indeed. Chinese industry produces counterfeit clothing, electronics, automobiles, etc.. So it really is no surprise that they would manufacture counterfeit aircraft. If the concept art is legitimate, the Shaanxi Y-20 looks like a counterfeit Boeing C-17 Globemaster III. Since I know nothing about the Chinese legal system, would Sukhoi have any legal remedies in China?
T

Deino said:
So, the next round of discussion might be open with the unveiling of the J-16 prototype #1606 of Shenyang's "equivalent" to the Su-30MKK.

Follwong the sparse information available, it seems indeed to have an IFR-probe, WS-10A Taihang turbofans, a new radar (if the often mentioned AESA ??? ), the stronger front landing gear with two tires .... but the former Russian smaller wing-tip pylons.

From what I can see it's an interesting amalgam of features from various Flanker variants, but all in all does resemble a Su-30MKK most - cadder's drawing appears to have the tail fins wrong, they have Su-30MKK-style tall rudders (without fixed insets at the bottom like the Su-27UB or Su-30MKI) but Su-27-style cropped tips. Apart from what you mention (it will be interesting to see detailed pictures of its nose, I wonder if the structure has been redesigned as on the Su-35) there seem to be possible MAWS sensors on the LERX below the bort number and further interesting appendages behind the canopy, below the nose and behind the airbrake.


EDIT: No, actually the "things" on the LERX and below the nose look more like relocated pitots on closer examination - note also that the large probe that is located behind the canopy high up on the spine in most Flankers seems to be gone. And whether the stuff behind the canopy hinge and the airbrake really is anything more than a differently coloured panel is also hard to tell - we need better imagery

Yes we surely need but sadly acess to SAC is not so open as to CAC !

Here are some suggestions for improving the drawing, it appears that the RWR fairings on the intakes have been removed too (as on the Su-30MKK and J-15), but it's hard to be sure with these images. Since they've clearly messed around with the air data system, I also wonder whether there is a nose pitot present at all. The pictures with blurred background suggest that it has one, but is this because the person who modified it expected to see a pitot and misidentified something that is actually part of the background? It would be great to see that photo without censoring (and cropping, as that would probably confirm the presence or absence of the intake RWR).

Agreed, good observation ! So it is indeed a Su-30MKK-copy simply with WS-10A + old-stle fin caps !? ... here's a probably better one (albeit without the tail) by an other artist ! (+ comparison to the other Chinese Flankers)

Seems as if reports about the start of the J-16 serial production are true .... 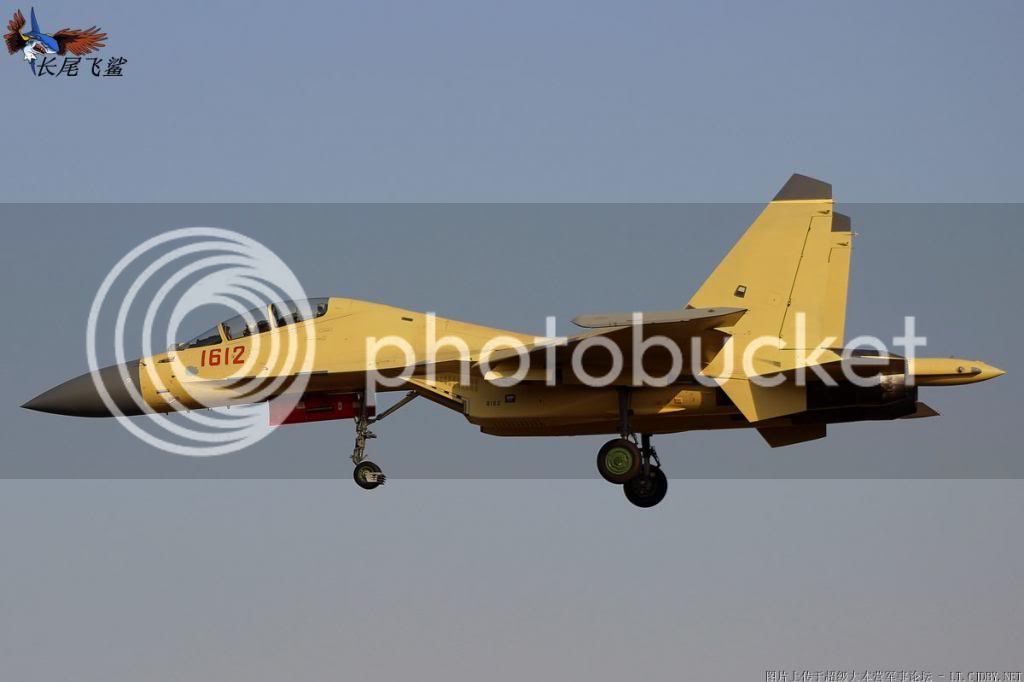 There is indeed no longer a pitot !!!

who knows, but i would think not. if jh7a production ceased, xian would find itself without much work. as far as i know, xian is building new plant specifically for y-20, so they don't intent to use the jh7 plant for it.

at the same time, we don't know if shenyang can just double its production rate on a whim, doing both j11 and j16. or even just switching to j16 but suddenly doing 45 of them a year. my guess is j16 is simply a more multirole orientated flanker. plaaf may've said "we've got enough single role fighters, we could use the multiroles from now on". So i imagine j16 will just get produced in previous j11 plant and slowly replace existing j7 and j8, alongside j10b.
T

IRST looks like the one on the J-10B, rather than previous Chinese Flanker iterations.

JFC Fuller said:
Does this mean the impending end of JH-7A production?
Click to expand...

Most likely not, since the production seems to be continuing with the latest JH-7B version.

However there are reports that the PLAAF might prefer the J-16 (as one the Su-30MKK) and the JH-7B will only go to the PLANAF.

it doesn't need to be either-or situation for plaaf. they can get both j16 and jh7b, just as they've gotten both jh7a and j11b throughout the last several years.

also, without expansion in number of regiments/bases/pilots planaf doesn't really have much room to accept additional jh7b. A regiment or two more, at the expense of fighter regiments, before pretty much everything gets modernized. At that point one might expect rebuilds of existing jh7 into jh7b, as those jh7 shouldn't have more than a few thousand hours in them.
T

Another thought: with China progressively increasing the indigenous content of their Flanker clones (probably reaching a new high on the J-16), what about the gun? This is an interesting question, because to date even the most modern completely Chinese domestic designs (J-10 and JF-17) still use a local copy of the old GSh-23. While very light, it's a pretty weak gun by current standards, whereas the GSh-30-1 (similar weight!) has probably the best fire power to weight ratio achieved to date.
L

Trident said:
Another thought: with China progressively increasing the indigenous content of their Flanker clones (probably reaching a new high on the J-16), what about the gun? This is an interesting question, because to date even the most modern completely Chinese domestic designs (J-10 and JF-17) still use a local copy of the old GSh-23. While very light, it's a pretty weak gun by current standards, whereas the GSh-30-1 (similar weight!) has probably the best fire power to weight ratio achieved to date.
Click to expand...

I'm pretty certain it does - but where was it built? Has China perhaps succeeded in making a local derivative?
L

Trident said:
I'm pretty certain it does - but where was it built? Has China perhaps succeeded in making a local derivative?
Click to expand...

I have no idea, but it wouldn't be the first time China has indigenized a Russian gun . I dare say that China is Russia's most studious student (and America's when they can still get that help).
G 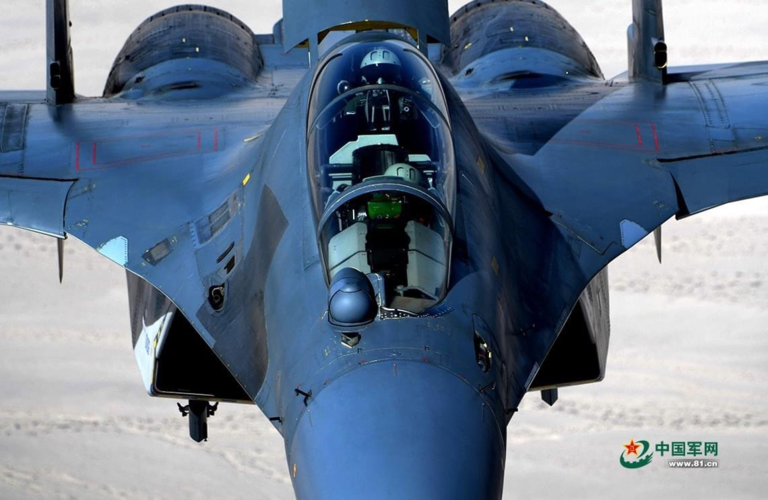 Maybe you know what's with IRST? Is it rotatable?

Maybe you know what's with IRST? Is it rotatable?
Click to expand...

I would probably think that instead of being rotatable it is a static protective cover for the IRST. Because if you look at the Russian Su-27's they did not fit one to their IRST's, and you can look at the inner workings.
T