MOSCOW: Russia has blocked the sale of Chinese fighter planes with Russian engines to Pakistan.

President Pervez Musharraf said last year that the JF-17s would be flying in Pakistani skies by March 2007. Islamabad plans to acquire 150 JF-17s, known in China as FC-1. China has bought 100 Klimov RD-93 engines from Russia for installing on JF-17s, with an option to contract another 400 engines.

Speaking to Indian and Russian journalists ahead of a visit to India by Russia's Deputy Prime Minister and Defence Minister Sergei Ivanov on January 22, Col.-Gen. Mazurkevich confirmed that India and Russia are shortly to sign accords to jointly develop and produce a 5th generation fighter plane and a multi-role transport aircraft.

India is expected to announce during Mr. Ivanov's visit its choice between two Russian concepts of a multi-role stealth fighter plane of the 5th generation that the Russian aviation majors, Sukhoi and MIG, presented to the Hindustan Aeronautics Limited (HAL) last year.

The aircraft deals will be discussed when Mr. Ivanov co-chairs with Defence Minister A.K. Antony the 6th meeting of the Indo-Russian Inter-Governmental Commission for Military-Technical Cooperation. Ahead of the commission meeting on January 24 Mr. Ivanov will fly to Bangalore to visit the HAL and the Indian Space Research Organisation (ISRO), as well as some leading Information and Technology companies, and meet business people.
Click to expand...

FC-1/ JF-17
(click to view full)The military world has no shortage of irony. The defense industry has its moments too, as Pakistan just discovered. An aircraft whose development was driven by military sanctions from the US and Europe is now derailed by military sanctions. This leaves the Pakistani Air Force dependent on an alternative from... America. Meanwhile, the Chinese are left with no export launch customer for a plane they may now have to reluctantly buy themselves, instead of the favoured and more capable J-10. Somewhere in Delhi, champagne is pouring - but first, a bit of background.

The JF-17/FC-1 is a sub-$20 million fighter designed as a co-operative venture between Pakistan and China to replace F-7P (MiG-21+) and Mirage 3/5 aircraft in Pakistan's fleet. China also has options to produce them, but has made no firm decisions and seems unenthusiastic. It's a comparable peer for India's still-under-development LCA Tejas, Taiwan's F-CK-1 Ching Kuo fighters, and South Korea's T/A-50 Golden Eagle supersonic trainer & light fighter. Sino Defense reminds us that the JF-17/FC-1 'Xiaolong' has a long history...


Chinese J-7E
(click to view full)The site recalls that China signed a $550 million agreement with Grumman in 1986 to modernise its J-7 fighter (MiG-21 copy) under the "Super-7" upgrade project, with US and British firms competing to provide the engine and avionics. The project was canceled after the Tienanmen Square massacre, but Chengdu Aircraft Industry Corporation managed to continue the programme with its own resources, and the project was re-branded as FC-1 (Fighter China-1). US sanctions related to Pakistan's nuclear program and Chinese-Pakistani use of ballistic missile components led Pakistan to seek helps from its Chinese ally. A joint development and production agreement was signed in June 1999, with China Aviation Import and Export Corporation (CATIC) and Pakistan each contributing 50% of the estimated $150 million development costs.

The Pakistan Government had hoped to sign a deal to acquire 150 JF-17/FC-1 fighters in 2007, with 8 aircraft in service by year's end. China had reportedly even bought 100 Klimov RD-93 engines from Russia for installing on JF-17s, with an option to contract another 400 engines.

There's only one problem: Russia has just refused permission for the transfer of its RD-93 engines, derived from the RD-33 that equips the MiG-29. The decision comes only a few days after a visit to India by Russia's Deputy Prime Minister and Defence Minister Sergei Ivanov, during which a number of joint defense projects were discussed and agreements were signed. These include the MRTA transport aircraft, and reportedly a "5th generation fighter" project, even as the MiG-29OVT/MiG-35 is touted as the likely winner of the multi-billion MRCA fighter contract.


Coincidence? Not a chance. Replacement with another engine? Unless it's a very close copy, that requires re-work of the entire fighter design and takes years. Just ask the J-10 project team.

Can anybody tell what is this? I am asking especially for the indentification of the top 3 view. If its real FC-1 version, is this the predcessor or the successor of the current design?

I think the bottom 3 view FC-1 is based on the original mock-up and first prototype.

The top image I think is of final product of the development stage, in other worlds what the FC-1 became after Prototype Number 4. Notice the top image has a larger LERX, DSI intakes, and a modified vertical stabilizer likely to carry ECM equipment. All these features are present in the current FC-1/JF-17 production model.

Good observation. But what is puzzling me is the shape of the nose (the real current FC-1/JF-17 has the nice rounded cross section) and the shape of the fuselage and tail arround the nozzle, which are also different.

Sorry, but that's simply an old Fan-art published before the modified no. 04 prototype was colled out. Additionally there are persisted rumours - mostly from Pakistan - that CAC is working further on a stealthyfied FC-1/JF-17 - sometimes shown with twin tails ... but IMO nothing serious.

Thanks Deino. Regarding stealthified FC-1/JF-17, its not a rumour anymore, it was officially announced at the last Farnborough.

Matej said:
... its not a rumour anymore, it was officially announced at the last Farnborough.
Click to expand...

I checked the sources: in the official ShowNews article on the page 29 there is used the formulation "...also reportedly signed a Memorandum of Understanding...".

I had the interview with the PAC representatives myself and they said me that they are actively looking for the ways to reduce the RCS of the JF-17 (like is done on the SuperHornet). They were speaking about the 5th generation, that should counter the MRCA from India, but considering their other statement that they are willing to raise the price for 20 percent at max, the 4,5 generation is much realistic. Depending on the results, there is a plan to split the planned purchase of the 250 JF-17 into the 100 in the original configuration and 150 in the stealthified configuration between 2015 and 2025.

The fan-art artists impression, how the stealthified JF-17 can look like. To my knowledge no official graphics exist so far. Other two pictures show the Chengdu/Grumman Super 7 - original J-7 modification from the late 80s.

The aircraft in the artwork at the top looks pretty cool . These V fins are so sexy, I hope it materializes soon.

This was profile art I did for one of Deino's articles that covered the Chengdu/Grumman Super-7 design.

from Sabre II to Super 7

I have those on my hard disk...


And what about a Super 7 with english avionics (Sea harrier FRS.1 radar for example)?

Not Grumman, per se. That's a model of Grumman's F-8II PEACE PEARL upgrade. Prior to Tianamen Square, Grumman was investigating upgrades for both the J-7 and J-8II. The J-8II involved (if I remember right) an APG-66 radar, and other changes. The J-7 derivative was called Super-7, and was the predecessor to the JF-17, with a solid nose and side-mounted intakes.

Thank you, SOC. I thought that it might be a concept for an Angressor aircraft for pilot training.

Interesting potential development coming out of the recent Paris Airshow: 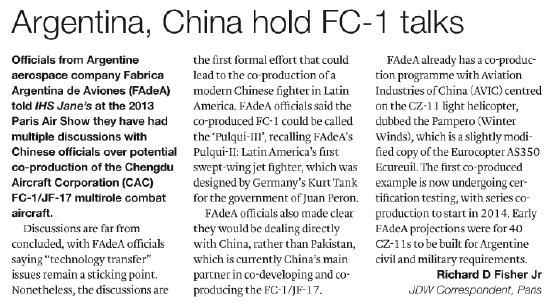 ISLAMABAD: A commission has been formed to investigate why a Pakistani JF-17 Thunder jet crashed into the Arabian Sea earlier this week, Geo News has learnt.

According to sources, the incident took place after pilot took off on a routine exercise flight from the Masroor Airbase in Karachi on Tuesday, September 27.

The pilot, however, stayed unhurt after he skillfully managed to eject before the aircraft crashed into water.

Sources say the commission will investigate the reasons behind the crash of the aircraft and will submit its findings which will become part of the Pakistan Air Force records.

The JF-17 aircraft series is Pakistan's own jet built jointly in collaboration with China.

The two-seat version of the JF-17, the JF-17B, has made its maiden flight. I assume this is a conversion trainer?

The JF-17 is to be offered with an AESA radar to boost its export prospects and perhaps eventually upgrade Block I and II aircraft already in use with the PAF.
The AESA radar is the KLJ-7A developed by the Nanjing Research Institutie of Electronics Technology (NRIET).

Hood said:
The JF-17 is to be offered with an AESA radar to boost its export prospects and perhaps eventually upgrade Block I and II aircraft already in use with the PAF.
The AESA radar is the KLJ-7A developed by the Nanjing Research Institutie of Electronics Technology (NRIET).

The description of AESA is somewhat informative as it also give some insight in cooling namely air. Sometime ago i tried making prediction of possible emitted power and later range, with some assumptions of number of TRM. The air cooling is typically capable of providing 2.3 kW/Sqm of antenna aperture.

My calculations suggest possible range of up to 191 km vs 5 sqm RCS and like 1 kW of peak power. depending on TRM Efficiency (25-33% with current state of the art)

There are now two competing AESA radars for JF-17/FC-1.

Not perhaps the best place (I'm sure Mods can correct me) but I see the most useful mention of the 'Peace Pearl' program here.

A nice photo by John J McKenna, posted on FB with the comment:

Photo is of the Chinese F-8II Peace Pearl aircraft going into the Anechoic Chamber for testing. The Peace Pearl program was a Foreign Military Sales deal under USAF direction to upgrade the jet with modern digital weapons and navigation systems and radar. We were going to test it flying out of the Mojave Airport in California, but the program was stalled when the Tiananmen Square showdown occurred in Beijing on 4 June 1989. We did get to conduct an engine start and systems ground tests at Bethpage before the program was outright cancelled in May 1990. This is my only photo of this Mig offshoot interceptor. A Communist jet, USAF leadership, an Italian missile integration effort, and lots of Chinese techs and engineers about made for a real circus.
Click to expand...

In one of the film’s highlights a JF-17, a fourth-generation fighter jointly developed by China and Pakistan, makes a surprise appearance.

In the movie, a teacher at the air force academy asks students to compare JF-17 with Mirage 2000 in class. A student answers that the JF-17 has three advantages including flexibility and safety and is complimented by the teacher.
Click to expand... 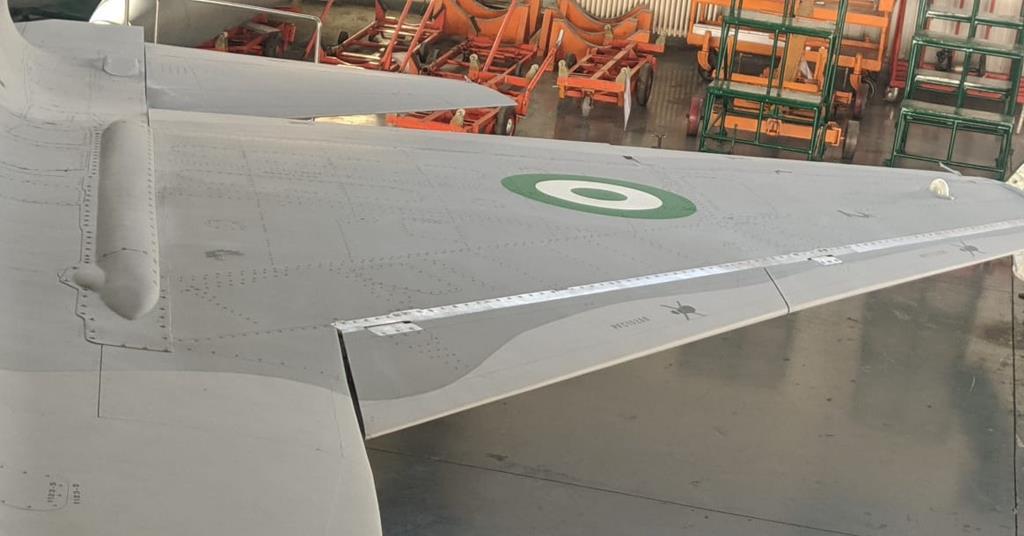 Nigeria gears up to receive JF-17s

The Nigerian air force is set to receive three Chengdu/Pakistan Aeronautical Complex JF-17 fighters, as well as eight unmanned aerial vehicles (UAVs) from China. The JF-17 acquisition will see Pakistani pilots and technicians deployed to Nigeria for the first year of operations in the country...