Abraham Gubler said:
The presence of a clear and present danger has never been an exclusive reason for national defence. If this were the case then Switzerland would be a long way down the list of countries that wouldn’t need an air force.
Click to expand...

That is true, but in most other cases the armed forces have more than one role. For example, the RAF's fighter force deals with air policing, is also large enough to provide a credible defence against an air attack on the UK, and is also used in a power projection role abroad, including combat missions in air-to-air and air-to-ground roles.

In comparison, the Swiss air force deals only with air policing, and that only during office hours. Being entirely surrounded by NATO nations, an air attack against Switzerland could only happen in the case of a major European war, in which case a very small force of fighters would be irrelevant.

Still, I was not really serious about the Swiss scrapping their air force (however logical that might be) as it provides one of the badges of national sovereignty. But there really doesn't seem much point in buying a top-line multi-role combat plane for air policing. One of the new supersonic advanced trainers would be adequate for that for about a quarter of the price - the South Korean KAI T-50 or the Italian M346.

Tony Williams said:
... as it provides one of the badges of national sovereignty. ...
Click to expand...


That's the point ! Apart from air policing, it's more of a symbol, than a true defence asset
and such symbols, especially military ones, are more and more scrutinised nowadays by
taxpayers/electors. For a government, buying new fighters so is a bigger political danger,
than the military threat, that's behind this decision, which probably is quite low for Switzerland !

Switzerland was purchasing the Gripen NG as replacement for their Northrop F-5E and F-5F fighters. The country still operates 26 McDonnell Douglas F/A-18C and 6 F/A-18D fighters.
T

Unless needs must - of course.. since even uncle Adolf was deterred from his customary uninvited intrusion..
T

Triton said:
Switzerland was purchasing the Gripen NG as replacement for their Northrop F-5E and F-5F fighters.
Click to expand...

The KAI T-50 I mentioned has roughly the same performance (Mach 1.5).

Found this image over at Key Publishing forums. It's apparently from Saab, but I don't know if it's legit or not.

Deduced from the "F-16IN" and PAK-FA in the slide, it could have been made sometime between January 2010 and April 2011, in the sales campaign for the Indian MMRCA.

“It’s fair to say we’re seeing a larger role than what we foresaw before the contract was selected,” says chief executive Frederico Curado, speaking to analysis on a second quarter earnings call on 31 July.

In the extended saga of the F-X2 selection process, discerning Embraer’s preferences and future role in the industrial offset programme was a frequent topic of speculation.

In 2009, a top Embraer executive noted that Brazilian industry stood to benefit the most by aligning with Saab over rival bids from the Boeing F/A-18E/F Super Hornet and the Dassault Rafale.

Embraer officially remained neutral over the course of the selection process, but corporately it formed a wider, strategic partnership with Boeing.

Embraer’s absence was noted last December in the formal announcement by the Brazilian air force, which selected the Gripen for the F-X2 deal.

In the months, the role of Embraer and other suppliers have been clarified.

The Brazilian Gripens will be assembled at Embraer’s military factory and flight test centre in Gaviao Peixoto, Curado says.

Embraer also will play a role in developing the two-seat version of the Gripen NG, he adds. It would mark Embraer’s first significant effort in designing and producing a new supersonic aircraft.

“We probably have a higher participation in that development than what we foresaw several months ago,” Curado says.
Click to expand...

RadicalDisconnect said:
Found this image over at Key Publishing forums. It's apparently from Saab, but I don't know if it's legit or not.
Click to expand...

Would love to see the math behind that slide.

RadicalDisconnect said:
Found this image over at Key Publishing forums. It's apparently from Saab, but I don't know if it's legit or not.
Click to expand...

Would love to see the math behind that slide.
Click to expand...

I don't see anything controversial. I'd probably put Gripen-C/D slighly higher compared to the F-16C/D.

If at first you don't succeed, try, try again. From Switzerland, Bilanz reports:

PR-agency Hirzel.Neef.Schmid.Konsulenten has been hired again by SAAB to lobby for selling Gripen to Switzerland. Last year, F-5 replacement was nixed after a referendum shot down a proposed deal to buy 22 Gripen NG aircraft. Starting in 2017, candidates for replacement of the Swiss F-18 fleet are to be evaluated, with replacement aircraft to enter service no later than 2025. H.N.S.K. is to step up its activities from 2016 onwards.[quote author=Agency spokesman Victor Schmid]Wir haben den Gripen zweimal durchs Parlament gebracht, das verbindet.[/quote]
We have guided the Gripen through Parliament twice, that cements/affirms [a relationship].

Separately, Saab has been awarded SKr223 million to develop and produce countermeasures equipment for its new-generation Gripen E/NG, which is on order for the Swedish and Brazilian air forces. Work will conclude during 2020, with the self-protection system also to be compatible with in-service C/D-model examples.
Click to expand...

The Czech Republic's fleet of leased Saab Gripens will undergo a weapons system upgrade as the NATO nation looks to expand the type's capabilities to support operations until late in the next decade.

That's interesting. The Swedes said that they were nicknamed "the velociraptors" after their first outing to Red Flag Alaska in 2006, which would reflect the Gripen ConOps.

LowObservable said:
That's interesting. The Swedes said that they were nicknamed "the velociraptors" after their first outing to Red Flag Alaska in 2006, which would reflect the Gripen ConOps.
Click to expand...

A nice pic via SNAFU: 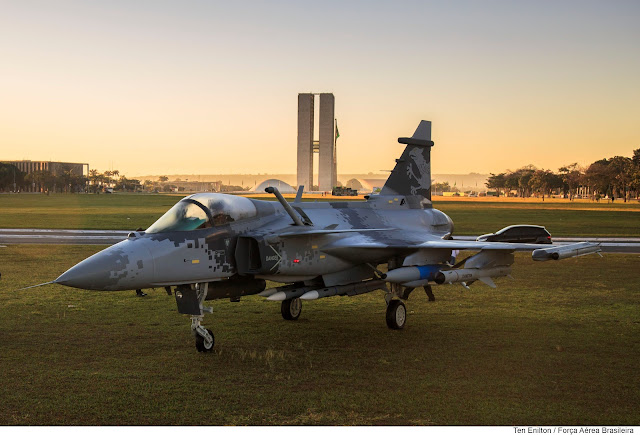 With the current economic and political situation in Brazil, is a new fighter realistic?
G

The original 36 aircraft contract is already funded, as far as I know. What might(should?) happen is any further acquisitions(original plans were for at least 120 aircraft, IIRC) get cancelled. But the FAB is playing its cards close to the chest, so there's nothing really defined yet.
L

Looking good, and no PIOs either! ;D

Here is the video of the Gripen E's first flight I have found on YouTube.

This Swiss aerowebmedia announces (in french) the Victory of the Gripen NG in Colombia (36 for 4,5 billions $), but no other media confirms... 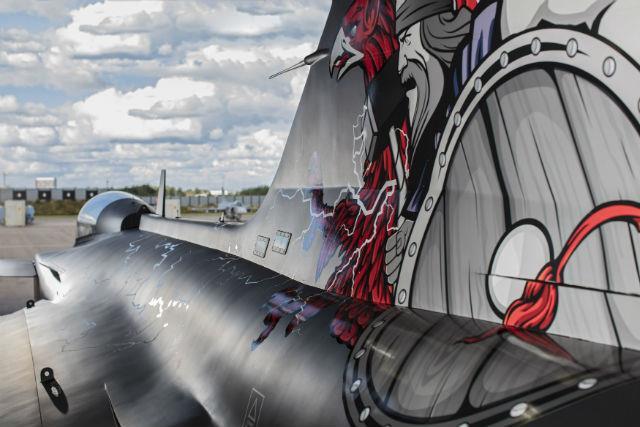 Published on Sep 12, 2017
Richard Smith tell us all we need to know about Gripen Aggressor.

Flying carpet sell rep...
Do they have that much surplus C models to sell ? Or maybe SwAF wants to get rid of their that way to get new NGs ?

Just a brief sales pitch rather than real information.

Difficult to see how this is remotely comparable with the costs for other agressor options
Click to expand...

I think the USAF ADAIR contract was at least exploring the possibility of supersonic aircraft. That means pretty much ex-IAF F-16s or ex-WarPac MiG-21s. And there seem to be some US State Department legal snags with reselling the F-16s. Gripen Aggressor gets around that by being a purpose-built non-combat aircraft that never had a weapons capability.

Anybody have the pdf?
F

Gripen Aggressor enters the fray in US red air competition

Saab is exploring the burgeoning red air market with its Gripen Aggressor, but the new adversary aircraft could face a tough competition against cheaper, former military jets.
Click to expand...

Gripen Aggressor enters the fray in US red air competition

Saab is exploring the burgeoning red air market with its Gripen Aggressor, but the new adversary aircraft could face a tough competition against cheaper, former military jets. 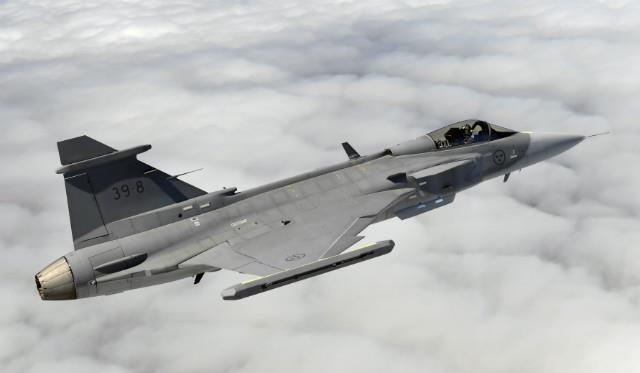 Saab's Gripen E remains on track for delivery to the Swedish and Brazilian air forces from 2019, with the Swedish company's first prototype having recently passed a significant performance milestone.

The Gripen E is apparently no longer in the running for the Swiss fighter replacement program:

The Switzerland MoD have since released this statement, which confirms that the Gripen E will have to be excluded from the competition: https://www.vtg.admin.ch/content/vt...medienmitteilungen.detail.nsb.html/75184.html
Google translate: http://translate.google.com/transla...g-internet/de/home.detail.nsb.html/75390.html

With the non-participation in the flight and soil testing Gripen E leaves the evaluation process. Retrofitting the flight and ground testing at a later stage would contradict equal treatment of all candidates and is not an option.

Since the beginning of 2018, armasuisse has been in regular contact with all applicants and has shown both the process and the criteria. Based on current information and analyzes on the degree of maturity and the integration of the subsystems, specialists from armasuisse and the Swiss Air Force came to the conclusion that several of the planned missions could not be carried out expediently. For this reason, armasuisse Saab has recommended that it withdraw from the evaluation. Apparently, Saab also came to the conclusion in a separate estimate not to participate in the flight and ground trials.

The following four candidates will remain in the evaluation:
• Airbus with the Eurofighter (DE)
• Boeing with the F/A-18 Super Hornet (USA)
• Dassault with the Rafale (FRA)
• Lockheed Martin with the F-35A (USA)
Click to expand...